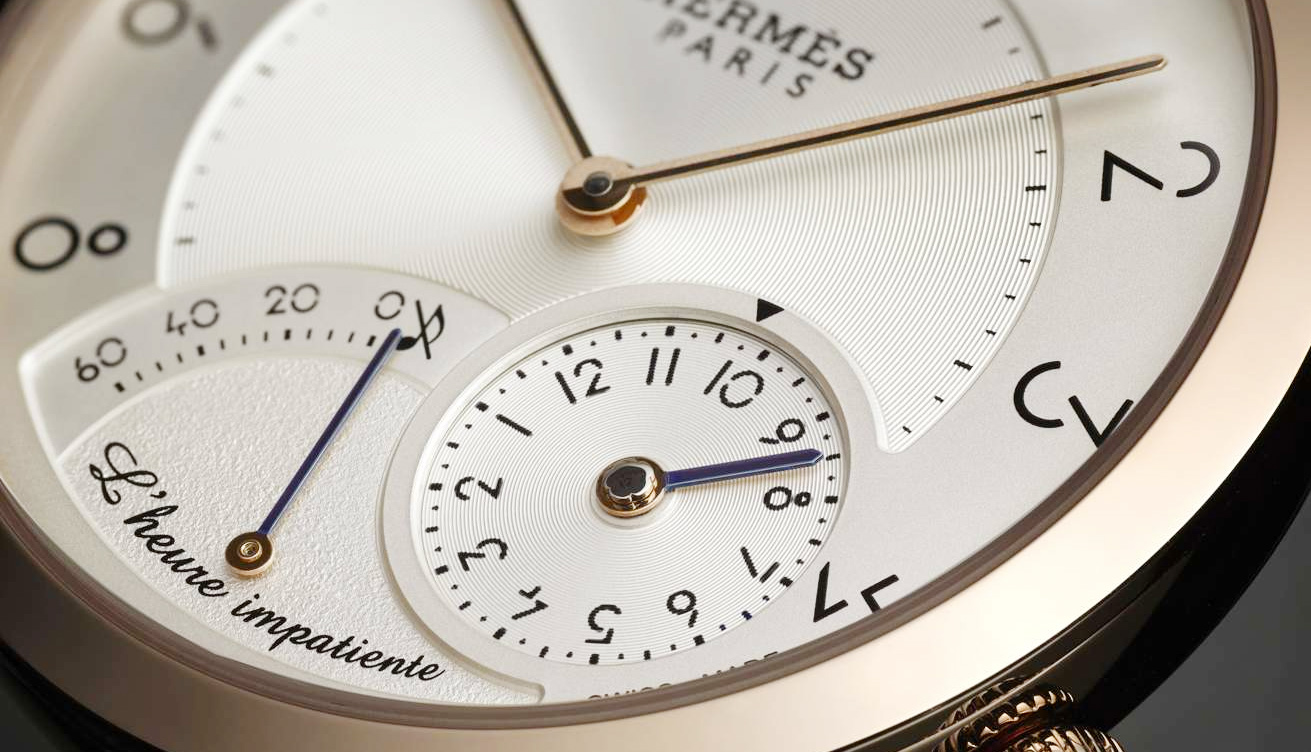 Our favourite new watches from Baselworld 2017

Baselworld, the world’s largest and most important trade event for watches and jewellery, descended upon Basel, Switzerland, once again for a one-week showcase from 23–30 March. During the prestigious event, top industry experts travelled from far and wide to present their most extravagant creations and innovative inventions to date. Here are our top picks of the new timepieces unveiled this year. 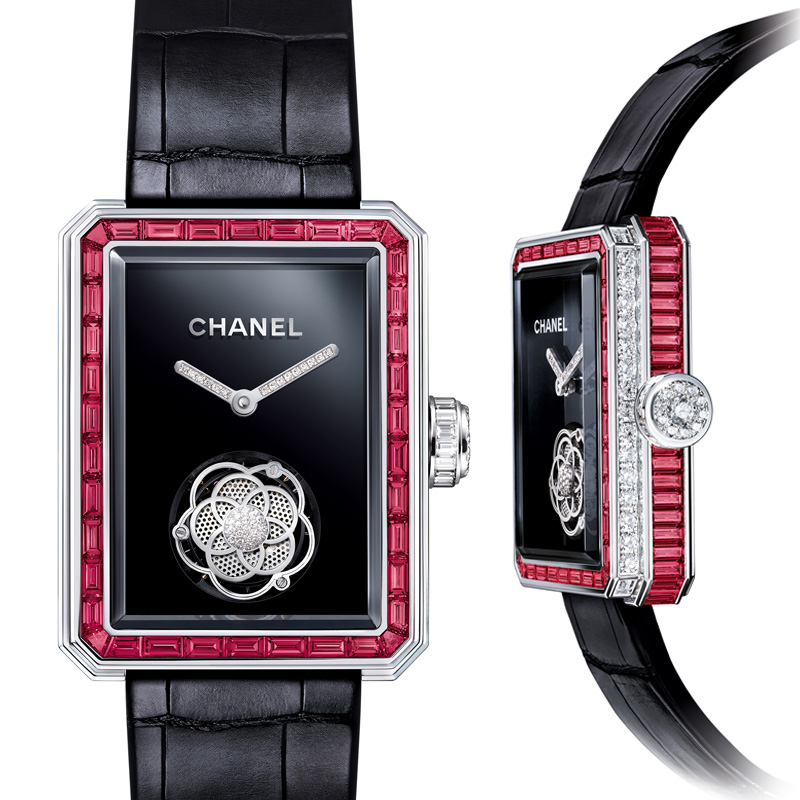 An icon since 1987, the Première is Chanel‘s very first watch created exclusively for women, inspired by the octagonal shape of the N°5 bottle-stopper and that of place Vendôme. To mark its 30th anniversary, the house has presented a limited edition Première Flying Tourbillon Rubies timepiece with only 20 pieces available worldwide. It features a 18K white gold case and bezel set with baguette-cut rubies as well as baguette-cut and brilliant-cut diamonds, along with a beautiful manual winding mechanical movement in the shape of a camellia. The extravagant piece is topped off with a black alligator strap to achieve a look of classic sophistication. 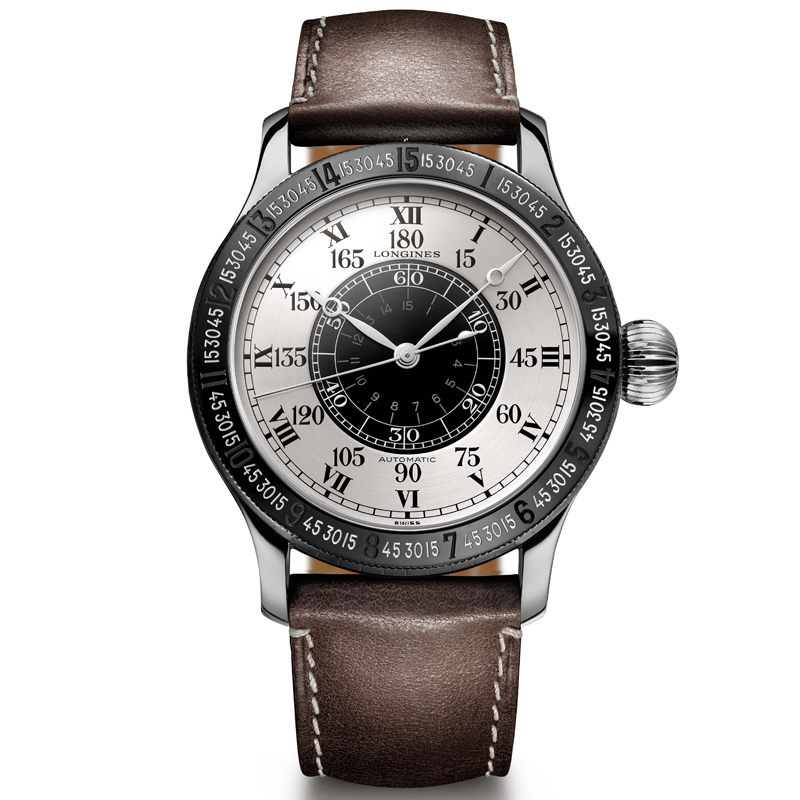 To commemorate the 90th anniversary of Charles Lindbergh’s extraordinary transatlantic flight in 1927, Longines has released The Lindbergh Hour Angle Watch 90th Anniversary in a numbered series limited to 90 watches. Measuring 47.5 mm, this new edition is equipped with a rotating bezel that allows for correction of the equation of time and a rotating central dial that allows for synchronisation to the second. The timepiece can also indicate the hour angle in degrees and in minutes of arc, in addition to indicating hours, minutes and seconds. 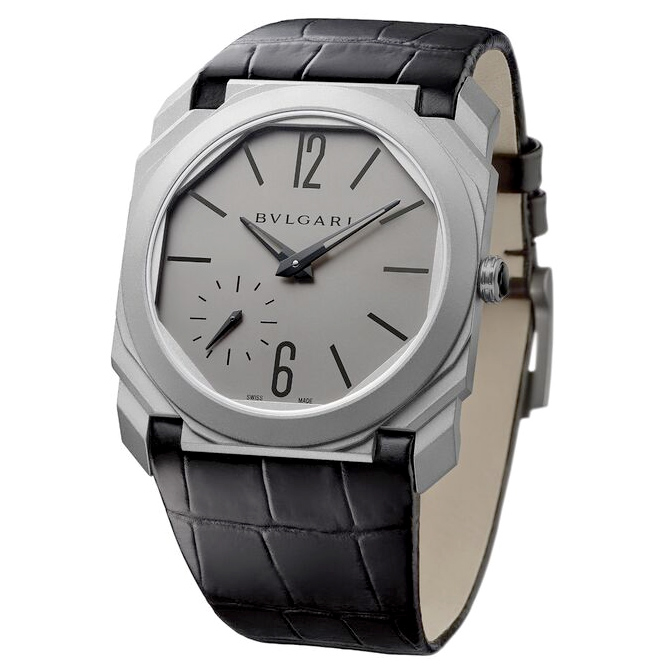 Bulgari has just set a new world record with its Octo Finissimo Automatic, which is the slimmest self-winding watch on the market to date. The new 40mm watch features a total thickness of merely 5.15mm, while its self-winding movement is just 2.23mm and equipped with a platinum micro-rotor. Powered by a self-developed in-house movement, Calibre BVL 138, the new piece beats at a frequency of 21,600 vibrations per hour and has a 60-hour power reserve, to ensure smooth energy regulation. 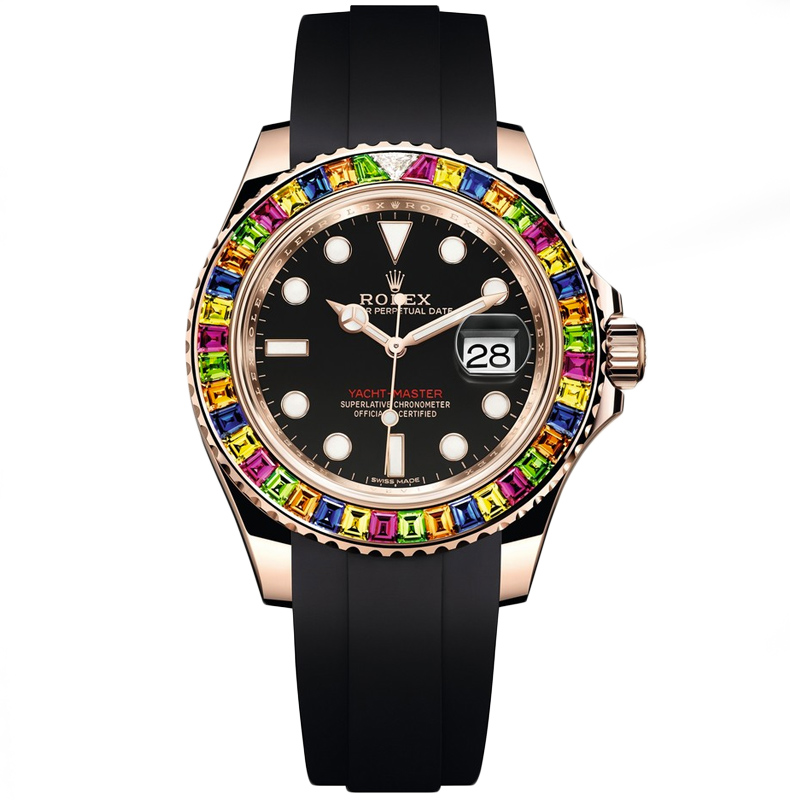 Rolex has introduced a gem-set version of its iconic nautical Oyster Perpetual Yacht-Master 40, featuring 18-carat Everose gold. The timepiece showcases a black gloss finish dial and a bidirectional rotatable bezel decorated with multicolour sapphires and green tsavorites, along with a triangular diamond at 12 o’clock. To ensure that it is precise, reliable and also waterproof, this special version is equipped with the innovative elastomer Oysterflex bracelet; and like all Rolex watches, it carries the Superlative Chronometer certification redefined by Rolex in 2015, which ensures singular performance on the wrist. 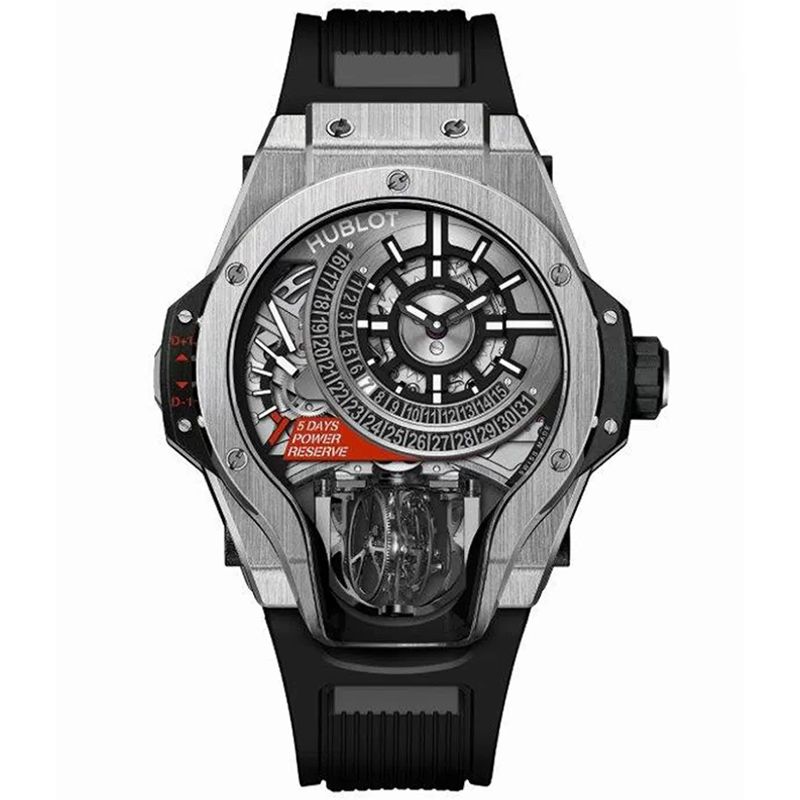 Always more of an innovator than a traditionalist, Hublot has once again pushed the boundaries with its latest MP-09 Tourbillon Bi-Axis timepiece, featuring the watchmaker’s first ever multi-axis tourbillon with a HUB9009.H1.RA calibre that offers a five-day power reserve. The unique case measuring 49mm offers a clear view of the bi-axial tourbillon, which rotates fully around one axis every minute, before making a full rotation around the other every 30 seconds. Available in two versions, these special edition models are limited to 50 productions for Titanium and 20 for King Gold. Part of the 8-piece Dior Grand Soir collection inspired by a fairy-tale garden, this timekeeper features a white gold case covered in a pavé of snow-set round diamonds. It’s highlighted with a dial that’s beautifully covered in precious stones, including mother-of-pearl, opals and elements in polished gold. To create the illusion of florals blossoming under the glass, all jewels were delicately placed through a play with volumes, which also resulted in an off-centre movement appearing at eight o’ clock. The midnight blue fabric strap, meanwhile, is specifically designed in undulating lines, identifying with the sense of modernity specific to Maison Dior. Like the rest of the collection, this piece is one-of-a-kind. 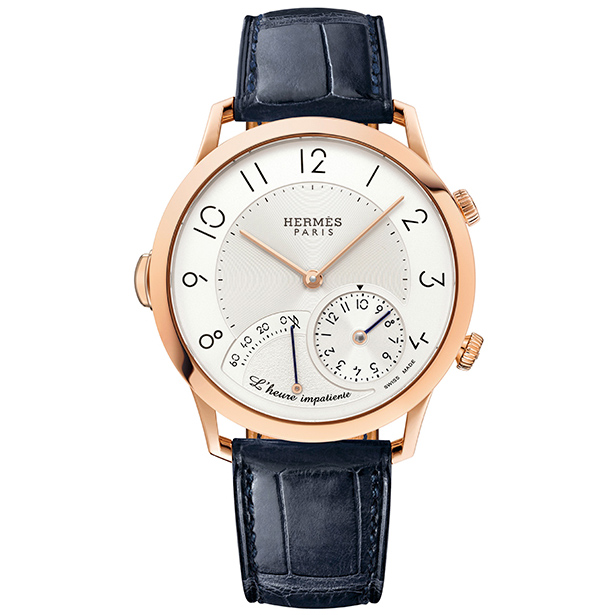 Featuring a 40.5mm rose gold case and an opaline silver dial in various textures, the Slim d’Hermès L’heure Impatiente by Hermès is most celebrated for its new complication (developed in collaboration with Agenhor) that allows users to set a special type of alarm. To set it up, simply turn the 12-hour counter to any time in the next 12 hours, then one hour before, the 60-minute counter will start. Once it reaches the end, the alarm will set off with a single chime that is crisp and clear, acting as a subtle reminder that is loud enough to hear by the watch-wearer, without being obtrusive. 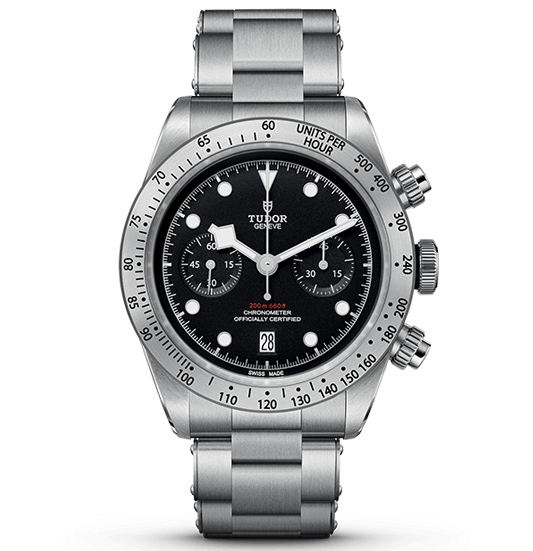 Combining its aquatic heritage and its ties with the world of motorsports, the iconic Heritage Black Bay family has welcomed a new member, the Heritage Black Bay Chrono — Tudor‘s first in-house chronograph equipped with manufacture calibre MT5813. Featuring a column wheel and vertical clutch, it is a high-performance movement that boasts a 70-hour power reserve and silicon balance spring, certified by the Swiss Official Chronograph Testing Institute. The watch is also available on a rich brown leather strap with folding clasp, and comes with a complementary navy-blue denim-style strap designed by Tudor. 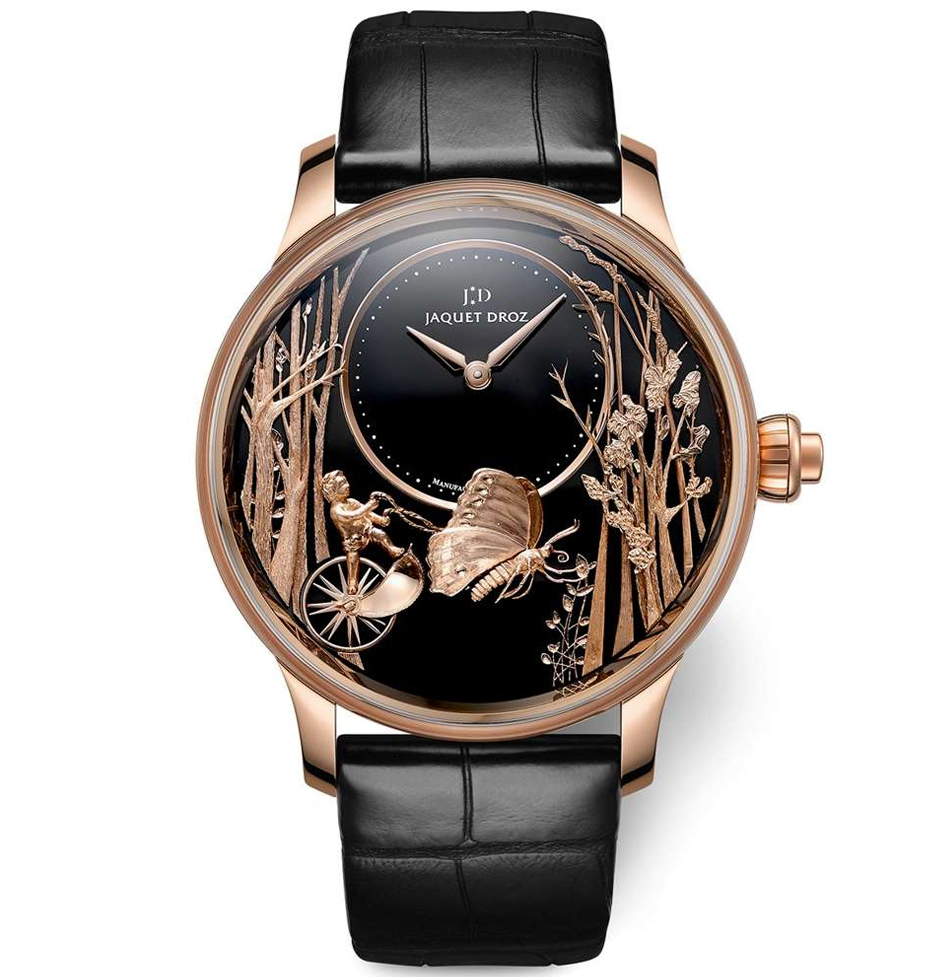 Known for its exquisite automaton watches, Jaquet Droz presents a brand new creation with a Petite Heure Minute dial that features a fluttering butterfly pulling a cherub seated on a chariot. Every element is completed in the tiniest details, and includes forty hand-engraved parts in white or red gold, all assembled manually with incredible attention-to-detail. Other than the flapping wings of the butterfly, the chariot is also highlighted with turning wheels. It’s all activated by a single push of the crown button, bringing the story to life.