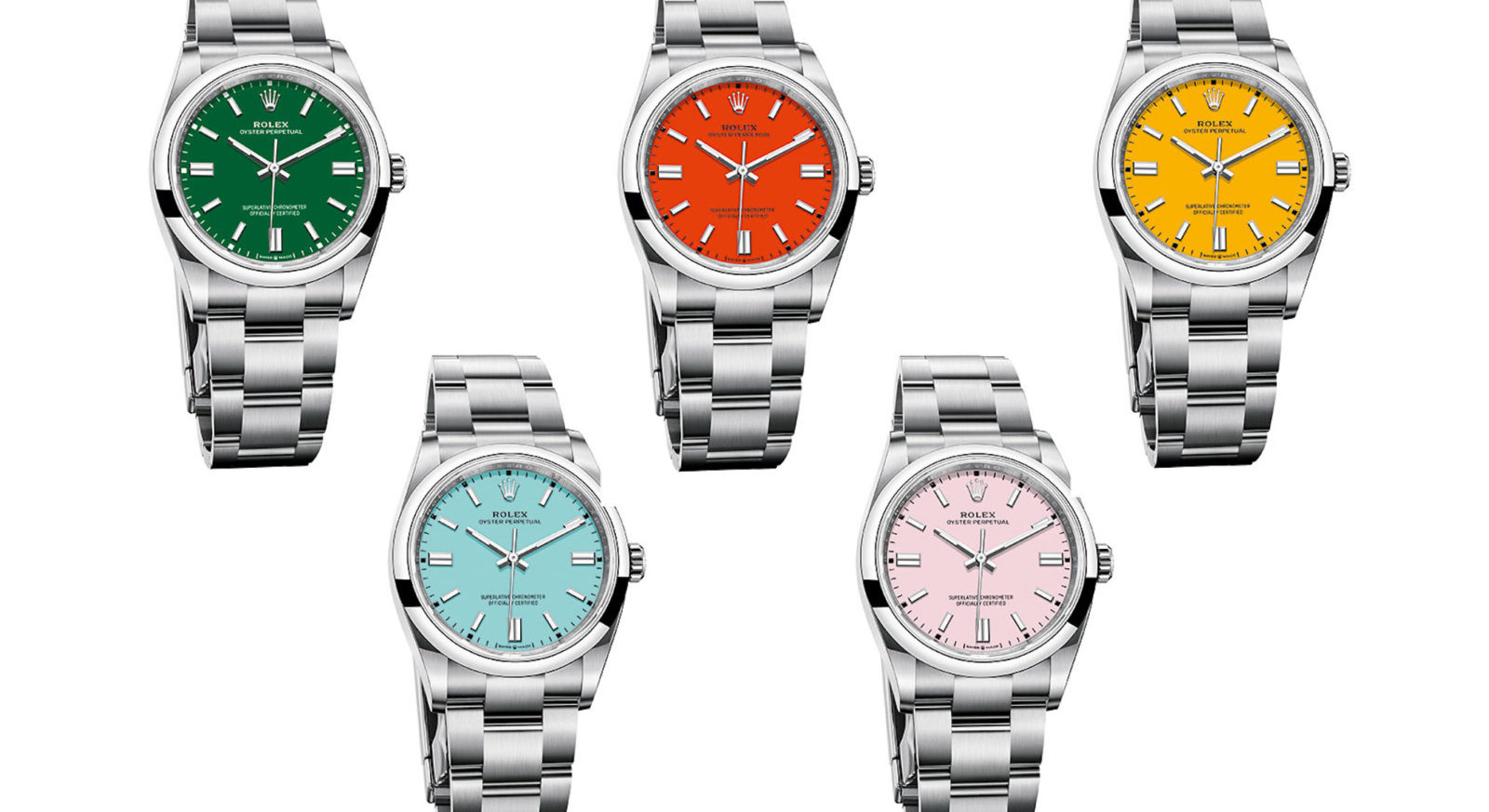 Taste the rainbow with these candy-coloured lacquer dials. (Plus: the 36mm OP gets its first new movement in nearly two decades.)

Since time immemorial — believe me, only a very slight exaggeration — Rolex has dominated the popular conversation with its third quarter releases. Earlier this week, the world’s preeminent horloger unveiled its latest generation of Submariner — a discrete upgrade on what is undeniably the most recognisable steel sports watch ever made.

As tends to be the case with anything Rolex-related, public reactions were polarised, with some collectors deriding the brand for being complacent and others hailing the new Sub as a masterful study in self-restraint. Now, in the words of comic John Mulaney, “we don’t have time to unpack all of that” — indeed, you might even argue that speculating about a 1mm size increase is practically immaterial — so instead, I thought we’d opt for much less contentious territory and talk about this year’s changes to the Rolex Oyster Perpetual 36.

It’s interesting to note that unlike the new no-date Sub, the consensus around these candy-coloured OPs has been broadly positive. Putting aside the interrelated issues of ‘market’ price and availability, every single one of the new colours — pink, green, yellow, coral red and turquoise — is a refreshing alternative to the glut of black, white and silvered dials typically associated with the lineup.

Provided you’re the speculative sort, you’ll want to get your mitts on the pink dial ASAP. According to Rolex reps, this colourway is limited to the 36mm case size (for the time being). What’s more, those who’ve managed to see the new watches in person report that the pink exudes something of a light ‘salmon’ tone — a description that is music to most watch enthusiasts’ ears.

Ticking away under each lacquered dial, you’ll find the latest generation of Rolex tech. Dubbed the calibre 3230, the importance of this new standard in robust, self-winding movements (currently also being rolled out for the 41mm OP and no-date Sub) can’t be overstated. For 19 years, the larger OP models have run off the calibre 3130. This newest movement builds on the existing reputation of the Rolex ‘3000’ series to offer timekeeping that is robust, precise and more convenient than ever before.

All of the brand’s usual hallmarks (e.g. ‘superlative’ chronometre certification, use of a Parachrom hairspring) are present, but the biggest change can be seen in the power reserve — that has been raised from 48 to 70 hours. In part, this improved duration has been achieved by way of Rolex’s impressive sounding ‘Chronergy escapement’: a patented design which relies on low-mass components and an improved escape wheel architecture in order to optimise use of the kinetic energy that’s delivered by the mainspring.

Even at this early stage, I’m fully confident these will be going out your AD’s door faster than anyone can say “waiting list.” On paper, the 36mm OP’s timeless design language, improved technology and unusually ‘fun’ dial selection (recalling the altogether rarer ‘Stella’ Day-Dates of the 1970s) make for a strong value proposition. That’s assuming you can even find them at retail — good hunting.

The new Rolex Oyster Perpetual 36 colourways are now available, all are priced at HK$43,400. To learn more, visit Rolex online.

The best men’s hats to style up your wardrobe