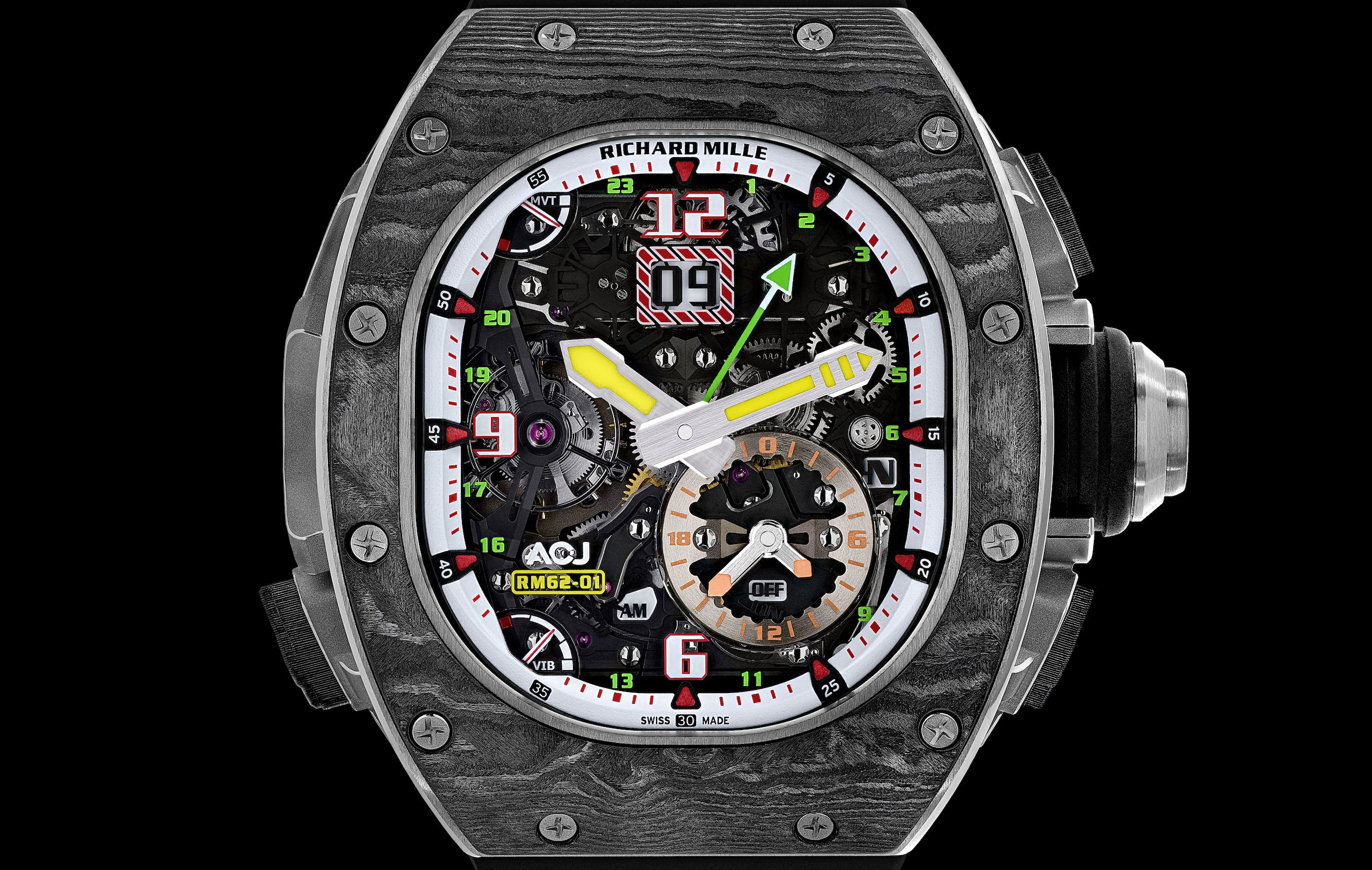 816 components, two barrels, 11 displays and a tourbillon: the new RM 62-01 might just be one of the most complicated watches Richard Mille has ever produced, and with competition like this, that’s really saying something. The new release marks the second collaboration with Airbus Corporate Jets (ACJ), the Airbus subsidiary that deals specifically in private bespoke aircraft. Manufactured with input from ACJ design head Sylvain Mariat, the brand’s latest effectively marries complicated watchmaking with a contemporary aviation aesthetic, and manages in the process to tee up a thoughtful, surprisingly discrete take on the traditional alarm complication.

Thematically, the RM 62-01 is a continuation of the partnership that previously yielded the RM 50-02 (a Airbus-cosigned split-second tourbillon chronograph) though the new timepiece bears more in common with Richard Mille’s McLaren edition flyback chrono. To that end, the RM 62-01 uses a case that is machined from titanium and Carbon TPTⓇ — heat hardened at 120 degrees celsius in order to obtain the brand’s characteristic all-over Damascene patterning.
Sizing too is consistent with what you’ll find throughout the McLaren releases. Measuring a very wearable 42mm, the RM 62-01 gets its characteristic wrist factor via the 49.94mm thickness of the case, making for a strong impression when worn. The visual effect is undeniably striking, and is accentuated by the array of eye-catching colours that festoon the skeletonised dial.

When designing the RM 62-01's double bezel, Richard Mille were inspired by the monochrome fuselages of custom ACJ aircraft.

Moving outward to the case periphery, Richard Mille’s designers have gone to substantial lengths to build and finish the watch’s haptic elements using an Airbus-inspired aesthetic. The two ‘pushers’ above and below the winding crown resemble the pylons that connect a jet’s engines to its wings; and are used (respectively) to advance the date and toggle the RM 62-01’s signature alarm function.
The crown itself, evoking a jet turbine, is topped with another pusher used to cycle through five ‘modes’ indicated on a small disc at 3 o’clock: ‘N’ is neutral; ‘W’ is to wind the watch; ‘T’ controls the central minutes/hours; ‘U’ is to adjust the secondary timezone; and ‘A’ is to set the alarm.

Unsurprisingly, Richard Mille is touting the RM 62-01’s alarm system as a focal point of its release — and that’s where things start to get very interesting. Unlike most alarm watches, which use a series of cam-activated hammers & gongs, the alarm for the RM 62-01 comprises an oscillating weight that’s inspired by the vibration of cellphones set to silent mode. The weight itself is actually a single piece of white gold, that oscillates at 5,400 rpm at the time the alarm is set (using the orange sub-dial between 3 and 5 o’clock).  This novel version of the alarm — aimed at putting you in the mindset of an executive receiving his mid-meeting notifications — was made possible by enlisting the aid of Dominic Renaud and Giulio Papi — two watchmakers who have worked on some of the important complications of the past 20+ years.

Under the hood, the RM 62-01 is powered by a manual-winding tourbillon movement that tops out at around 70 hours of power. The finishing is consistent with what we’ve seen across a range of the brand’s watches: the baseplate and bridges are skeletonised (so as to enable a clear front-to-back view); and fashioned from PVD-treated titanium, lending the entire movement architecture improved rigidity and smoothness.

Notwithstanding the aforementioned alarm, the movement incorporates (conservatively) a number of useful ancillary functions. Distinct power reserve indicators, displaying the energy for both the watch and the alarm are included; and a green UTC hand gives wearers the ability to keep track of a secondary timezone.

Style Watches Audemars Piguet Airbus Richard Mille RM 62-01
Randy Lai
Editor
Having worked in the Australian digital media landscape for over 5 years, Randy has extensive experience in men's specialist categories such as classic clothing, watches and spirits. He is partial to mid-century chronographs and a nice chianti.
Style Watches Drinks Tailoring Travel
Sign up for our newsletters to have the latest stories delivered straight to your inbox every week.