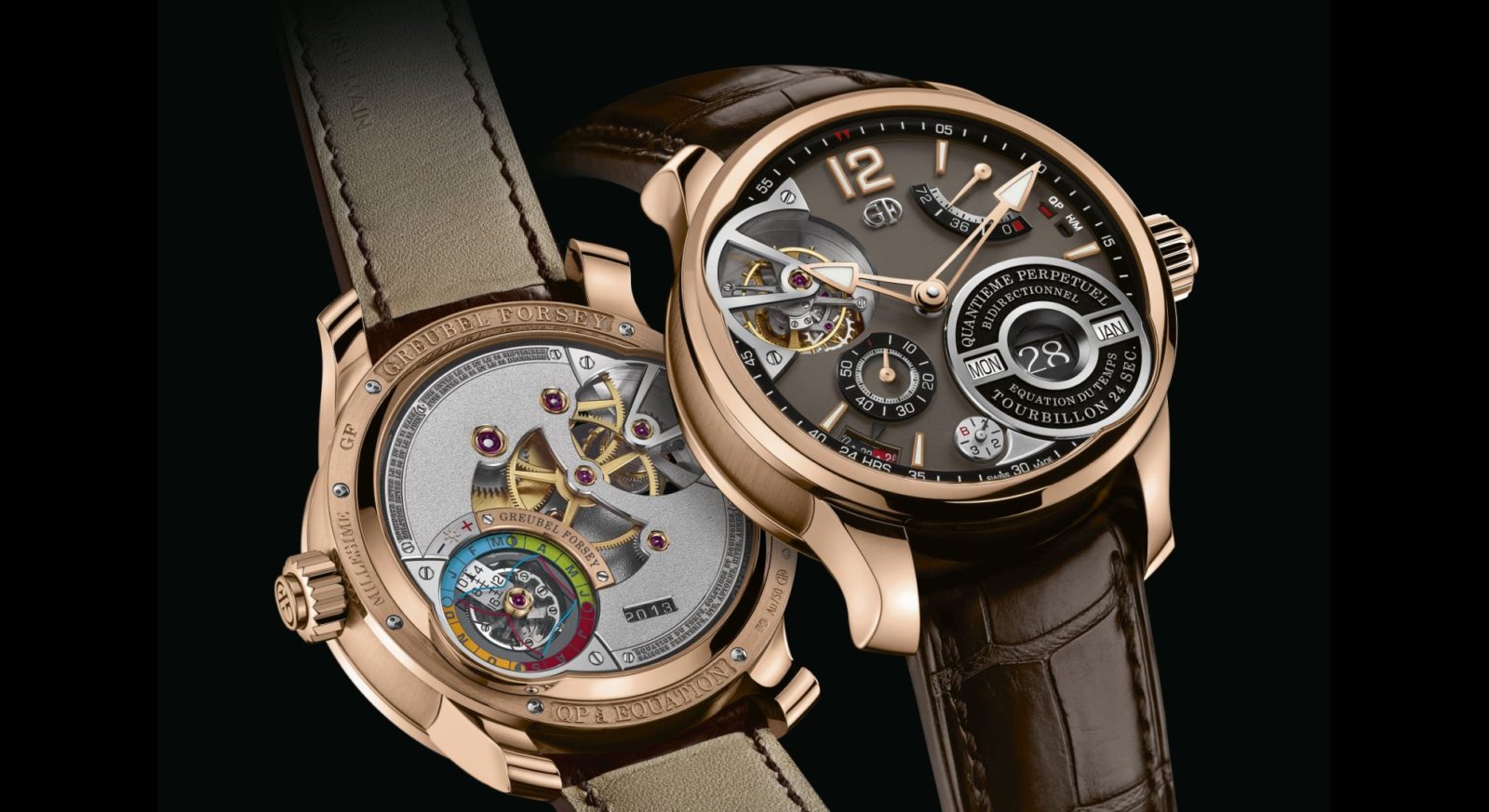 The masters of complicated timepieces — often likened to miniature cities under glass — unveil a striking new iteration of the QP À Équation, this time in red gold with a chocolate brown dial.

You’re probably tired of hearing the words ‘pandemic’, ‘Coronavirus’, ‘worldwide health emergency’ or some combination thereof; but until the global outlook improves, a lot of watch brands are going to be breaking their 2020 releases digitally. Thus far, we’ve already seen Montblanc and Breguet unveil novelties using the wondrous reach of the internet. Bearing that in mind, today we’re going to take a quick look at the new QP À Équation: one of the most complicated wristwatches produced by Greubel Forsey, available for the first time in tonal shades of gold and brown. Don’t get it twisted: at a technical level, this particular QP À Équation is very much identical to its predecessor — that is to say, a staggering achievement in the twinned fields of astronomy and high watchmaking — albeit now in a less austere, more aesthetically cheery package.

To the best of my knowledge, the QP À Équation isn’t something that we’ve talked about at length — previously, we’ve covered the GMT Earth and Balancier Contemporain — and that’s honestly inexcusable, given how prominently it figures within the wider reputation of Greubel Forsey. As you can probably guess from its name, the QP À Équation is a synthesis (among other things) of two important horological inventions: the perpetual calendar and ‘Equation of Time’. The former is a well-documented self-explanatory mechanism, incorporated into all kinds of watchmaking.

The ‘Equation of Time’ requires somewhat more explaining. To grossly oversimplify: the latter allows horologists to measure the difference between ‘solar’ and ‘civil’ time (i.e. the conventional measure which most of us use in daily life, whereby it’s assumed there are 24 hours per day). When calculating solar time, each day’s length varies based on the position of the earth and its elliptical orbit around the sun: this explains why a solar day might be 14 minutes shorter in February, 16 minutes longer in November and so on. The Equation of Time is able to calculate these monthly variances using two sapphire disks (pictured below) which rotate independently of one another over the course of a year Simultaneously, this complication displays the relevant season along equinoxes and solstices. 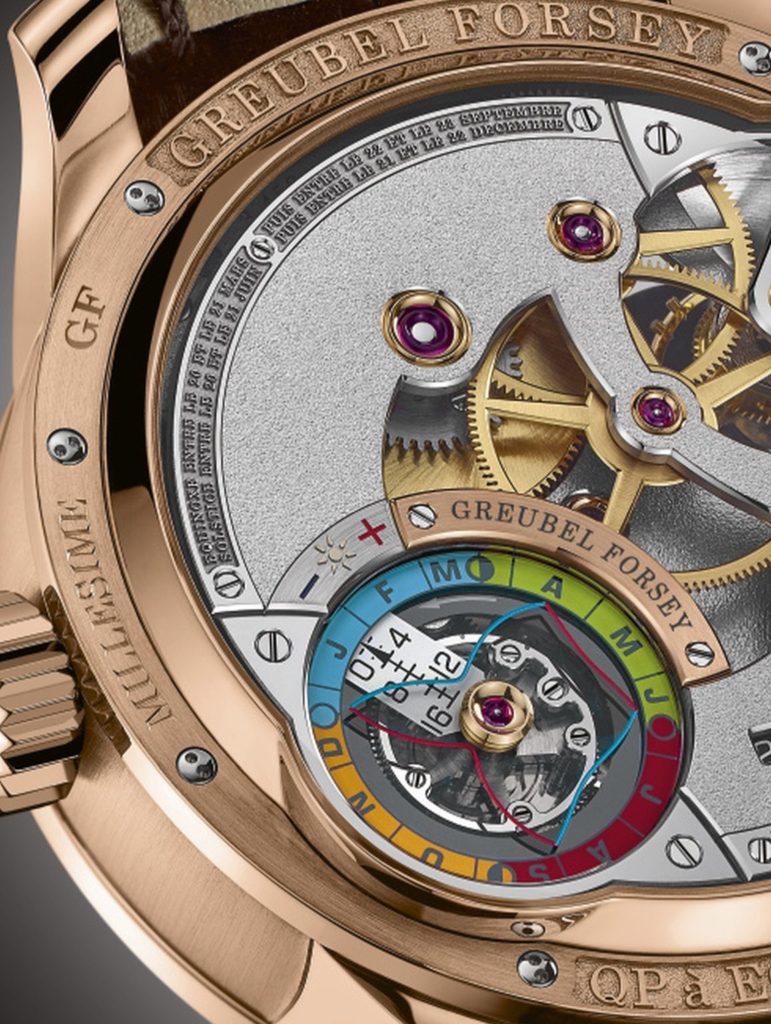 The ‘Equation of Time’, which displays the current differential in solar time together with the season, solstices, and equinoxes. 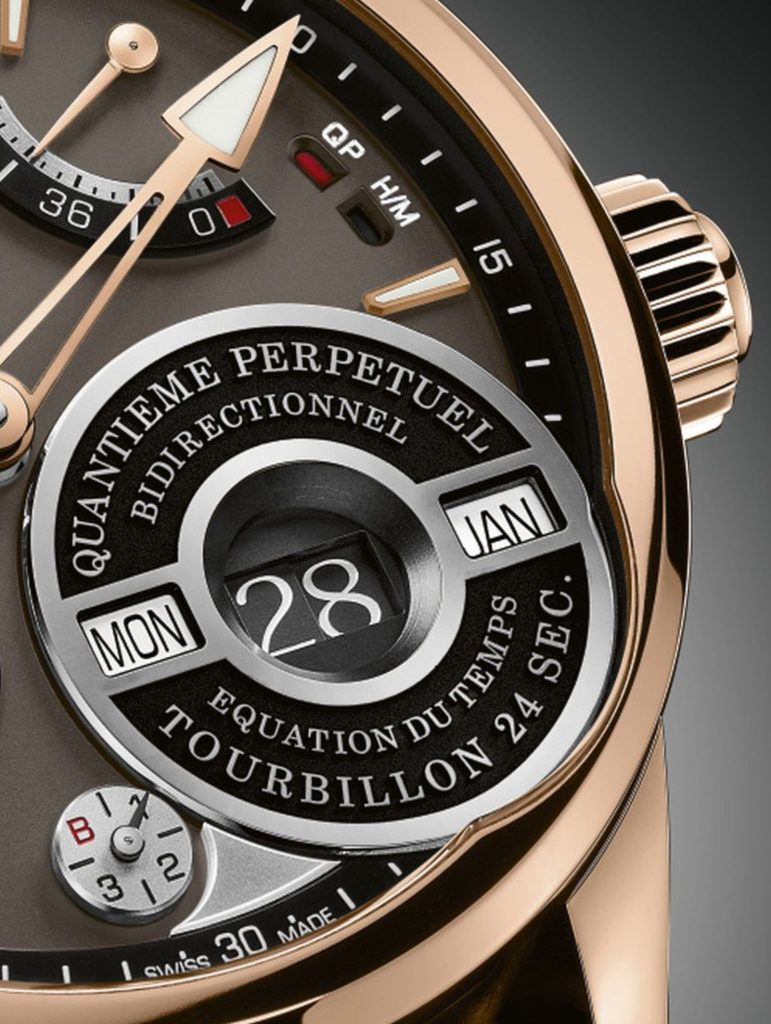 According to Stephen Forsey, the perpetual calendar and Equation of Time play complementary roles: enabling wearers to gain a clearer more nuanced picture of where they exist in both time and space. To that end, the QP À Équation is equipped with a grand total of 15 complications which, taken together, allow wearers to measure a broad spectrum of chronological and spatial phenomena. Translation? In no particular order: the watch integrates the aforementioned perpetual calendar; month & year displays; an AM/PM indicator; and, for good measure, Greubel Forsey’s signature inclined tourbillon (positioned at 10 o’clock). Because why not?

In a piece of watchmaking as complicated as the QP À Équation, even the smallest aesthetic change can make for a world of difference. The move to a reddish/brown colour scheme is a clear illustration: whereas the half-dozen readouts adorning the 2015 model could often appear homogeneous against its monochrome case and dial, Greubel Forsey’s latest execution improves visual harmony across the board (despite the fact that many displays feature the same black-polished finish exhibited on the original). As you’d expect of a watch which costs as much as a housing deposit, movement plates are hand-frosted, jewels are set inside gold chatons, there’s more angling than you can shake a pantograph at, and most visible text is relief-engraved — a difficult technique that it’s easy to appreciate when you take even the briefest of glances at the movement.