Home > Style > Watches > In the Metal: The revitalised Bulgari Aluminium 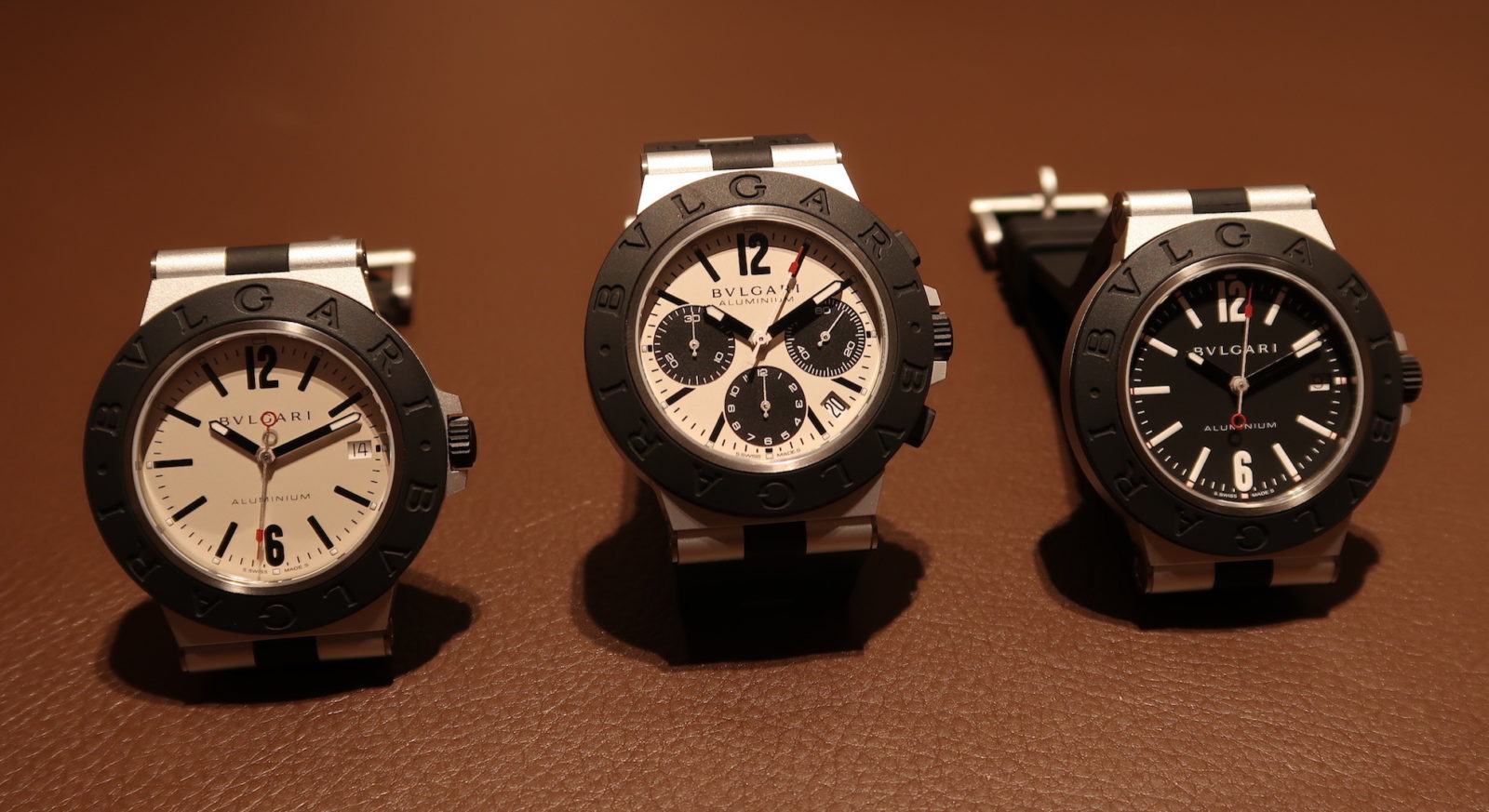 Style
In the Metal: The revitalised Bulgari Aluminium
Share this article
Next article

The Roman luxury house’s new trio of 90s throwbacks offers a surprising amount of watchmaking at an ‘entry-level’ pricepoint.

I think one of the great sins perpetuated by the watch collecting community (myself included) is a wilful lack of perspective. Spend too much time in the company of ‘serious’ watch people — particularly in a city like Hong Kong — and you’ll come away with the sense that the only pieces worth having are maddeningly expensive über-complications produced by esoteric indie brands. The fact is that contemporary watchmaking is a much richer tapestry than that and, in reality, has been for many years.

The success of a collection like the Cartier Pasha — incidentally, also revamped this September — speaks to the massive demand among millennial consumers for watches that are branded and fashionable, yet sold at a price tag that lets them get their foot in the door. Certainly, Bulgari’s revived Aluminium line manages to tick all those aforementioned boxes, but what I found more interesting was just how enjoyable they were to wear — regardless of any caveats as to price or ‘intended audience’.

Before kicking on, I’m just going to take a minute to state the obvious: the Bulgari Aluminium isn’t a new watch. The design was originally conceived by the Italian luxury house in 1998, in an era when the rubber-on-metal craze was still in its infancy. Patek Philippe had just launched its first Aquanaut reference, the Ref. 5060, a year prior.

These watches today are clearly descended from what came before; and now have the benefit of much improved technology — demonstrated in a proprietary rubber bracelet, new automatic movements and Bulgari’s latest aluminium alloy.

There are three models in total — two time-and-date options, plus a chronograph — all of which possess the same fashionable design language. The case is made in three parts, sized at a very approachable 40mm and treated with a matte, sandblasted finish.

Overall, each watch makes a subdued impression on the wrist: a welcome quality given the presence of no less than four ‘BVLGARI’ signatures (present on the dial, bezel and caseback). In the time-and-date models, the seconds hand features two red accents — small pops of colour that help to break the mass of monochrome in each dial.

For the chronograph, Bulgari have opted to protect the crown and pushers with a PVD coating, helping to sync the watch’s peripheral part with the bezel and dial.

The bracelet is another area where the latest incarnation of the Aluminium has an edge. Building on the previous design, each features elongated rubber segments, connected to one another with a series of cylinder-shaped metal mid-links. It’s a clever way of infusing the structure of the traditional bracelet into a rubber strap, let down only — and this is purely a matter of personal taste — by the inclusion of yet another two logos.

A selection of movements

Part of the reason Bulgari has been able to price the new Aluminiums so competitively comes down to what was chosen for the movements. In both the simple and chronograph versions they are based off of the robust ETA 2892: a calibre which has seen service in a vast array of watches, and that can be as accurate as ±5 seconds per day when correctly adjusted. Bulgari’s watchmakers then take this basic architecture and produce it in-house, adding a few cosmetic upgrades (as well as conducting chronometre testing).

In particular, the calibre B130 is the real value pick of the trio — based as it is on the modular chronograph version of the 2892. In addition to the standard stop/start chronograph function, wearers also get a date wheel: inset at 4:30 in order to accommodate the standard ‘3-6-9’ layout for the registers.

The Bulgari Aluminium is available in two time-only variations (black or white), priced at HK$21,900. It is also available as a chronograph, priced at HK$31,600. To learn more, visit Bulgari online.

LVMH Style Watches Bulgari New Watches 2020
Randy Lai
Editor
Having worked in the Australian digital media landscape for over 5 years, Randy has extensive experience in men's specialist categories such as classic clothing, watches and spirits. He is partial to mid-century chronographs and a nice chianti.
Style Watches Drinks Tailoring Travel