The most intriguing convertible watches you can own

Watches are the last thing you should take at face value. Just like how a minimalistic looking watch can contain several haute complications within, a dial with a busy face could be deceptively basic within. These convertible watches are testament to that fact.

Equal parts functional and intriguing, convertible watches have the ability to transform themselves in appearance and/or function on demand. While this may sound like a concept well-honed by technology, the origins of convertible watches are actually well-steeped in time, when soldiers reworked their pocket watches into wristwatches via cupped leather holders. Later on in 1910, the now-defunct Gruen Watch Co. made pocket watches for ladies with silk ribbons attached so it could be worn on the wrist or around the neck.

Now, convertible watches do much more than vary in the way it could be worn. The dials flip over or transform at the the touch of a button, revealing a whole new face and a fresh perspective on timekeeping. Others convert into bracelets to do double duty as jewellery, while some are removable pocket watches, so you can relive Downtown Abbey in the comfort of your own office.

From the downright simple to the overwhelmingly complicated, here are some you need to include in your collection right now. 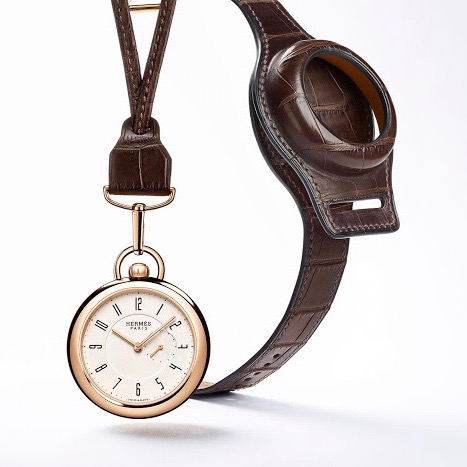 1
Hermes “In the Pocket”

Modelled after a leather pocket watch holder Jacqueline Hermes received from her father in the 1900s, the limited edition pocket watch is a simplistic 40mm beauty for modern times. It comes with an alligator hide wrist strap that burgeons the watch diameter to 49mm, but still keeps the look classy and unfused because it has no lugs. The H1837 automatic movement made by Vaucher is for wristwatches, and as such the dial sees an unconventional three o-clock and 12 o’clock position for the seconds and crown respectively. S$53 million seems a tad too much to spend on a watch, unless it transforms into a bracelet and ring. Named appropriately “The Fascination”, the iced-out piece by Graff Diamonds consists of 152.96 carats of white diamonds, accompanied by a 38.13-carat piece de resistance: a D Flawless pear-shaped diamond that can be kept on the dial to become an envy-inducing bracelet, or taken out to be worn as a ring. Although the timekeeping mechanism is kept to hours and minutes, the dial remains spectacular to look at with more diamonds encrusted all over. The only problem now, is how you’d want to show off this spectacular masterpiece. 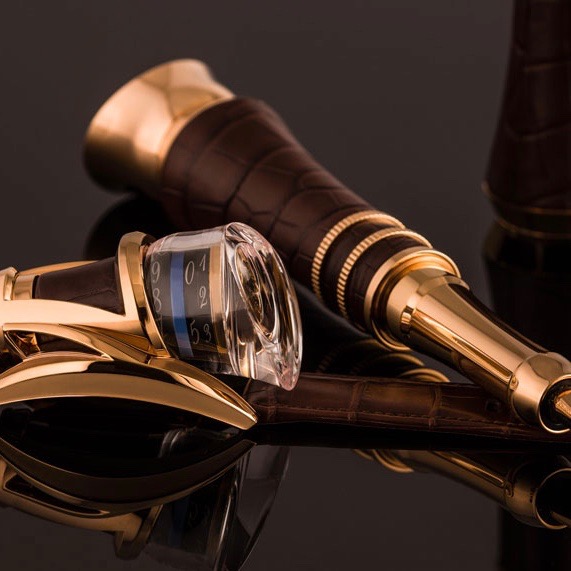 A functional objet d’art that comprises a wristwatch, tourbillon and fountain pen, the Write Time is a fascinating example of how watches can blur the lines between big boys’ toys. The ambitious project is the work of watchmaking engineer Anura Rafael, who’s developed an innovative linear movement by mounting the gears vertically and powering them by a one-minute tourbillon. Attached to the end of an elegant rose gold fountain pen swathed in decadent alligator leather, the horological capsule can then be detached and attached to a matching alligator strap, so you keep track of time whether you’re at or away the desk. 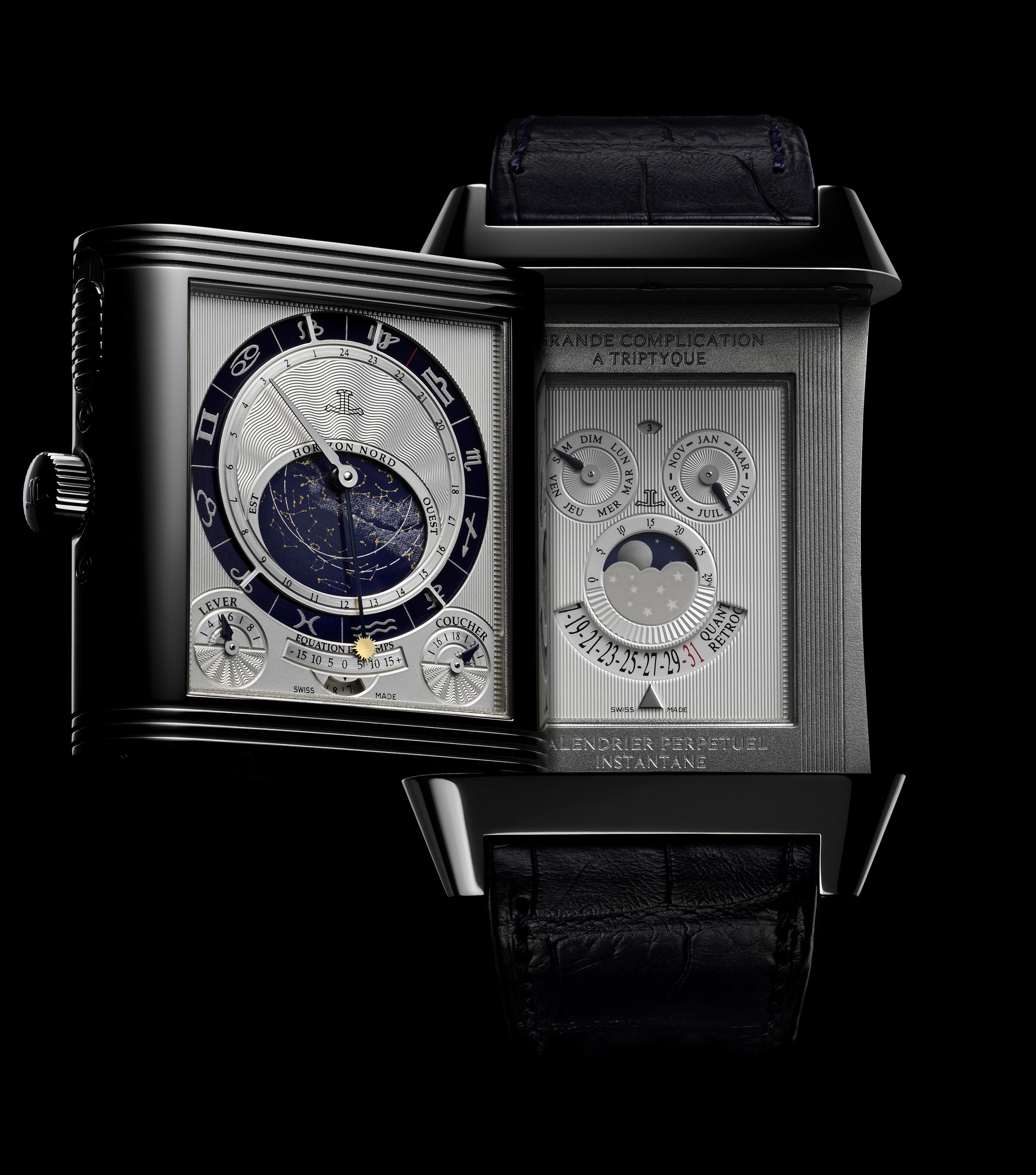 Originally constructed to withstand the rigours of polo games, the Reverso is one of the most well known convertible watches around. This version is perhaps the ultimate expression, showcasing the civil, sidereal and perpetual time on three different faces on the swivel case instead of the usual two. The grand complication (18 in total) showcases a tourbillon on the front, and the back, a zodiacal calendar with an astronomical chart, an equation of time, and times of sunrise and sunset. The last face, a perpetual calendar, adds charm and finesse to this extraordinary piece. 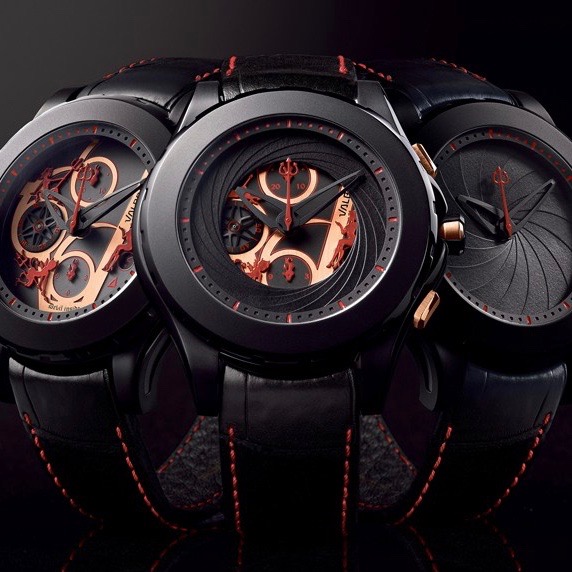 5
Valbray Oculus V01 The Devil Inside

Though it’s created with the intention of capturing the essence of Lucifer within a timepiece, “The Devil Inside” is really just business on the outside and play on the inside. Punctuated within the blackened DLC-coated titanium case are lava-red and fiery rose fold accents, with she-devils strategically placed to point out the seconds chronograph, the name of the watch and the date window. The party trick, however is the Obturator system, a 16-bladed function that encloses the dial in a hypnotically graceful motion via a twist of the bezel. What’s left are the hour, minute and seconds hands, and the only indication of anything sinister is the bold trident-shaped hand. 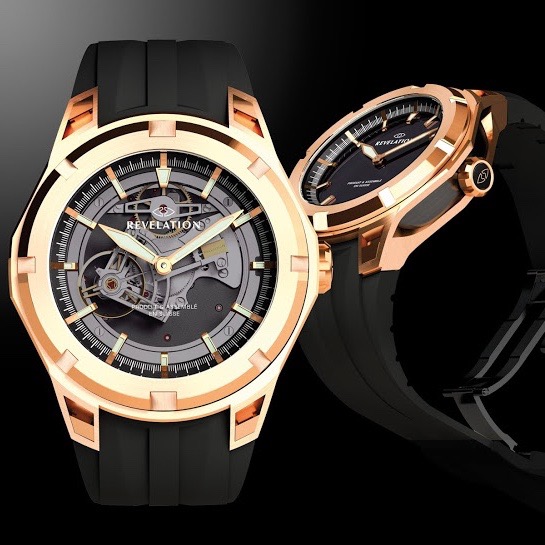 Revelation also takes you from day to night with a twist of the bezel thanks to its patented dial that polarises two discs to become transparent or matte black when rotated. This means you’ll get to choose between a traditional watch, or a skeletonised one that reveals all of the unique Tourbillon Manège within. The new type of complication features a revolutionary rotating regulating system that’s inspired by fairground carousel rides.