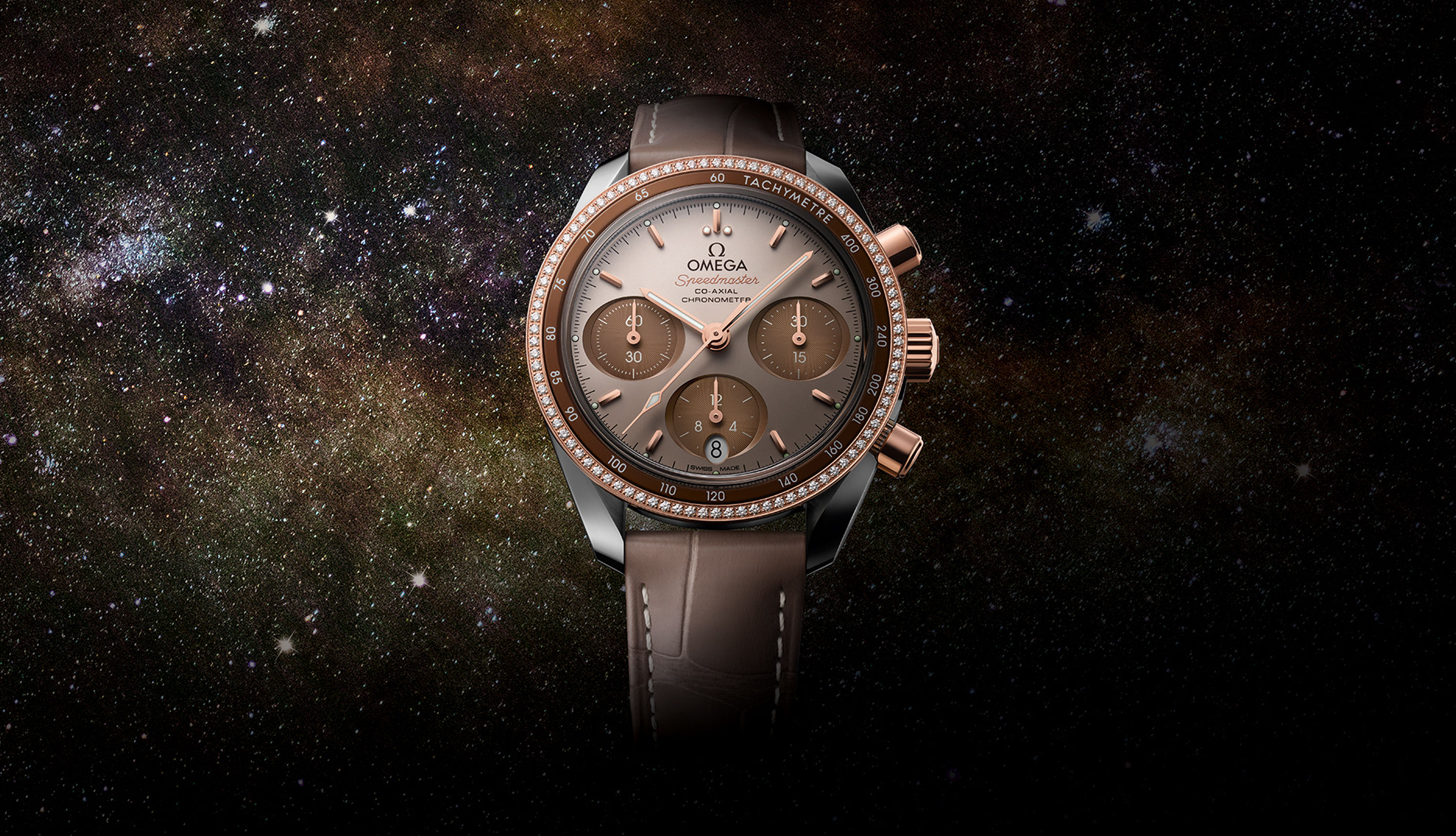 Omega’s new Speedmaster watches to be launched at Baselworld 2017

One of Omega‘s most iconic models, the Speedmaster, is celebrating its 60th anniversary this year. To commemorate this special occasion, the watchmaker is set to bring us a new collection of 38mm models featuring the famously enduring design the Speedmaster is known for, but with a slight twist of pure aesthetics. The entire collection will be revealed at Baselworld next month, but to heighten the anticipation, we’ve been given a preview of one of the new pieces ahead of its global debut.

Nicknamed ‘Cappuccino’ (in reference to the taupe-brown coloured sub-dials, tachymeter scale and leather strap), this new model features a stainless steel case, with the Speedmaster’s iconic Seahorse medallion stamped at the back, while the dial features three oval sub-dials — meant to reflect the shape of Omega’s logo.

The oval date window is positioned at 6 o’clock, and set in a lighter colour that contracts with the “baton” hands and indexes that are made from 18K Sedna™ gold. The bezel, also made from 18K Sedna™ gold, is elegantly paved with diamonds and surrounds a brown aluminium ring with tachymeter scale, retaining the sporty DNA of the original Speedmaster models.

The Cappuccino is also equipped with an in-house calibre 3330, complete with Omega’s legendary Co-Axial technology with a silicon balance spring — a result of supreme craftsmanship that gives the watch a 4-year warranty.

Other than the 38mm Cappuccino, another Speedmaster model which will be launched at Baselworld 2017 is the Moonwatch Automatic, the latest Speedmaster with Master Chronometer certification that’s subject to the Swiss industry’s highest standard of precision, performance and magnetic resistance approved by the Swiss Federal Institute of Meteorology (METAS).

The 44.25mm stainless steel watch features a distinctive motorsports–inspired minute-track style that first appeared on a Speedmaster model in 1968. The matte black dial, meanwhile, is adorned with 18k white-gold beveled arrowhead hour indices filled with white Super-LumiNova, as well as sub-dials that have been expanded for improved readability. It’s completed with a black leather strap with an orange rubber inner layer that can be seen through the micro-perforations achieved with a milling tool.

Men Style Watches Omega Speedmaster Speedmaster Automatic Baselworld 2017
Cindie Chan
Style Editor
Fashion blogger turned editor, Cindie has spent over seven years covering all things stylish in the digital world. When she’s not busy poring over the latest covetable releases or attending the most talked-about fashion events in town, you’ll find her enjoying some precious downtime with her newborn son and sweet dog Rosy.
Style Fashion Jewellery Watches Events Seafood dogs for adoption
Sign up for our newsletters to have the latest stories delivered straight to your inbox every week.