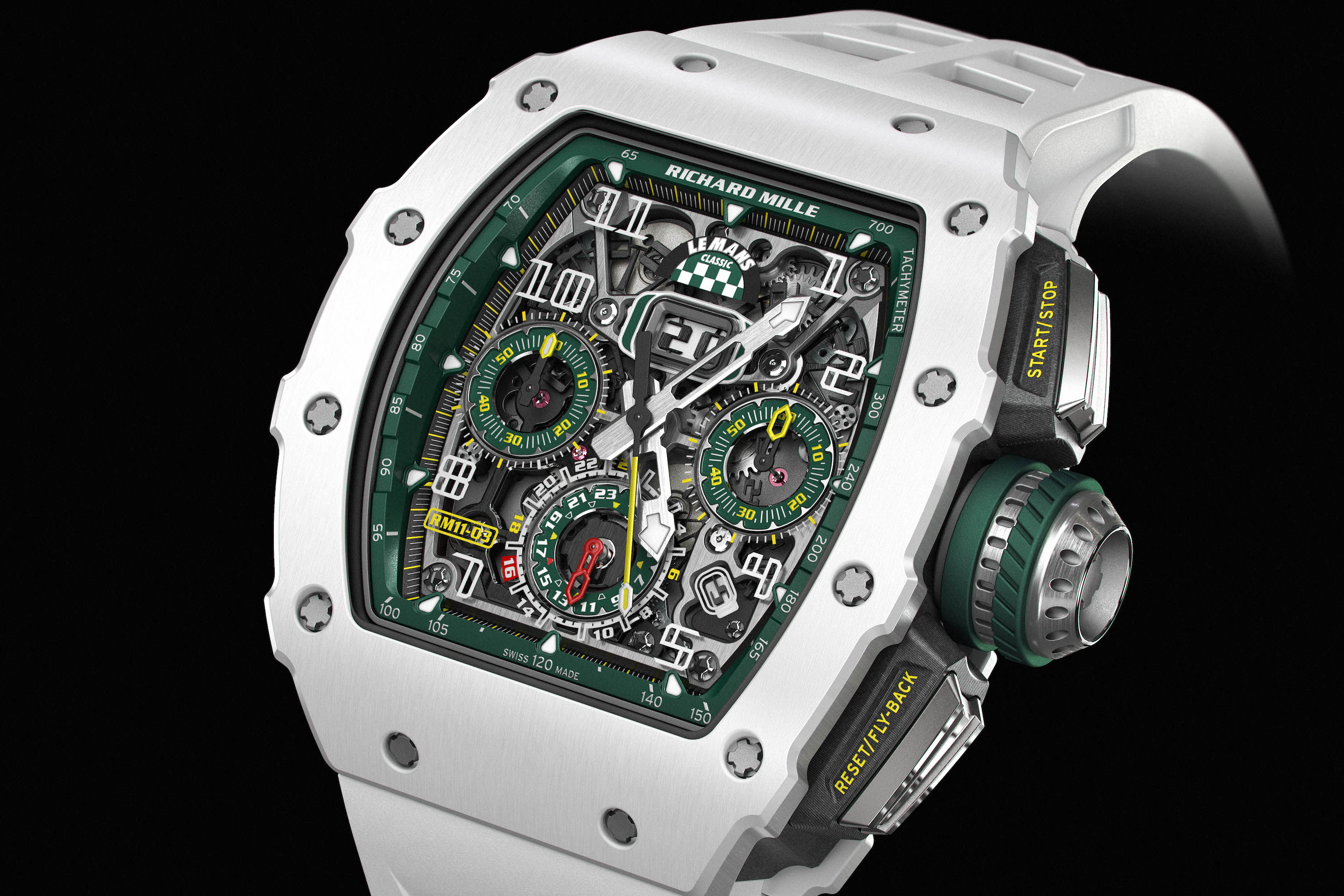 Since 2002, Richard Mille has been the official partner of Le Mans Classic: an offshoot of motorsport’s most iconic endurance race — the 24 Hours of Le Mans. To celebrate their 16-year-long partnership with the former, Mille has just released the RM 11-03 LMC. The “LMC” abbreviation implies this new model — from the masters of ultra-expensive and unrepentantly loud wrist candy — is inspired by the Le Mans Classic race, which took place this past weekend near the town of Le Mans, France. In truth, it draws from a variety of sources: including a previous design that the watchmaker developed in tandem with McLaren; the original 24 Hours of Le Mans race; and, more generally, the history of endurance racing at Le Mans.

Mille’s newest creation brashly references the original 24 Hours of Le Mans with the inclusion of a chronograph totaliser (located at the 6 o’clock position). The aforementioned race — and related events like the Le Mans Classic — has traditionally taken place over an entire day/night cycle that is as much about testing human limits as it is mechanical endurance. First held in 1923, the 24 Hours of Le Mans sees thousands of drivers compete annually in one of motorsport’s most gruelling challenges. A total of 500 cars, divided into six categories, traverse the legendary 13-kilometre Circuit de la Sarthe — covering total distances of over 5,000km. Since the 1970s, the race has also been renowned for its introduction of the “Group C” formula — a designation of race car with superior fuel efficiency, aerodynamics and reliability to operate at high speeds on both makeshift and permanent racing circuits.

With case components (made using the signature silica TPT) that are highlighted in British racing green, Mille’s newest release invokes the Le Mans races of a bygone era. As is customary, the new watch has been released earlier this month ahead of the Le Mans Classic — an event that Mille has been the exclusive sponsor for since the beginning. Organised by the Automobile Club de l’Ouest (the same group behind 24 Hours of Le Mans), Le Mans Classic brings together over 120,000 spectators twice per year for a showcase of the best cars from multiple historical time periods.

Teams typically field five to six vehicles (i.e. one per class); and the group accumulating the most points over the total number of classes is declared the winner. Cars are assigned to a particular class based on the original year that they competed (or would have been eligible to compete) in the 24 Hours of Le Mans event. In addition to its popularity with vintage motoring enthusiasts, Le Mans Classic is known for the sheer abundance of legendary drivers in attendance. Former F1 World Champion Jenson Button competed in this year’s edition — his car of choice is a 1988 Jaguar XJR-9 — while 24 Hours winner Jochen Mass also made an appearance.

From a technical perspective, the RM 11-03 LMC ought to appear familiar. Mille enthusiasts are likely to recognise its striking resemblance to the RM 11-03 McLaren: a collaborative project with Rob Melville (Design Director, McLaren Automotive) launched earlier this year in March. Both models — versions of a traditional two-register flyback chronograph — run on the RMAC3 calibre: an in-house movement with 55 hour power reserve. The big date aperture that accompanied Mille’s McLaren collaboration makes a return here; as do the titanium pushers at the 2 and 5 o’clock positions.

There are aesthetic divergences, however. Aside from the newly incorporated 24 hour totaliser, the RM 11-03 LMC’s most obvious point of distinction is its white ceramic case. This makes for a more organic backdrop against the model’s racing green TPT components; and (in our opinion) has the best on-wrist factor from a watch in this range yet.

The RM 11-03 LMC is limited to a production run of 150 pieces. For information about pricing, visit Richard Mille online.

McLaren Watches Horology Jenson Button Richard Mille 24 hours Le Mans Le Mans Classic RM 11-03 Le Mans Classic Jochen Mass Automobile Club of the West
Randy Lai
Editor
Having worked in the Australian digital media landscape for over 5 years, Randy has extensive experience in men's specialist categories such as classic clothing, watches and spirits. He is partial to mid-century chronographs and a nice chianti.
Style Watches Drinks Tailoring Travel
Sign up for our newsletters to have the latest stories delivered straight to your inbox every week.