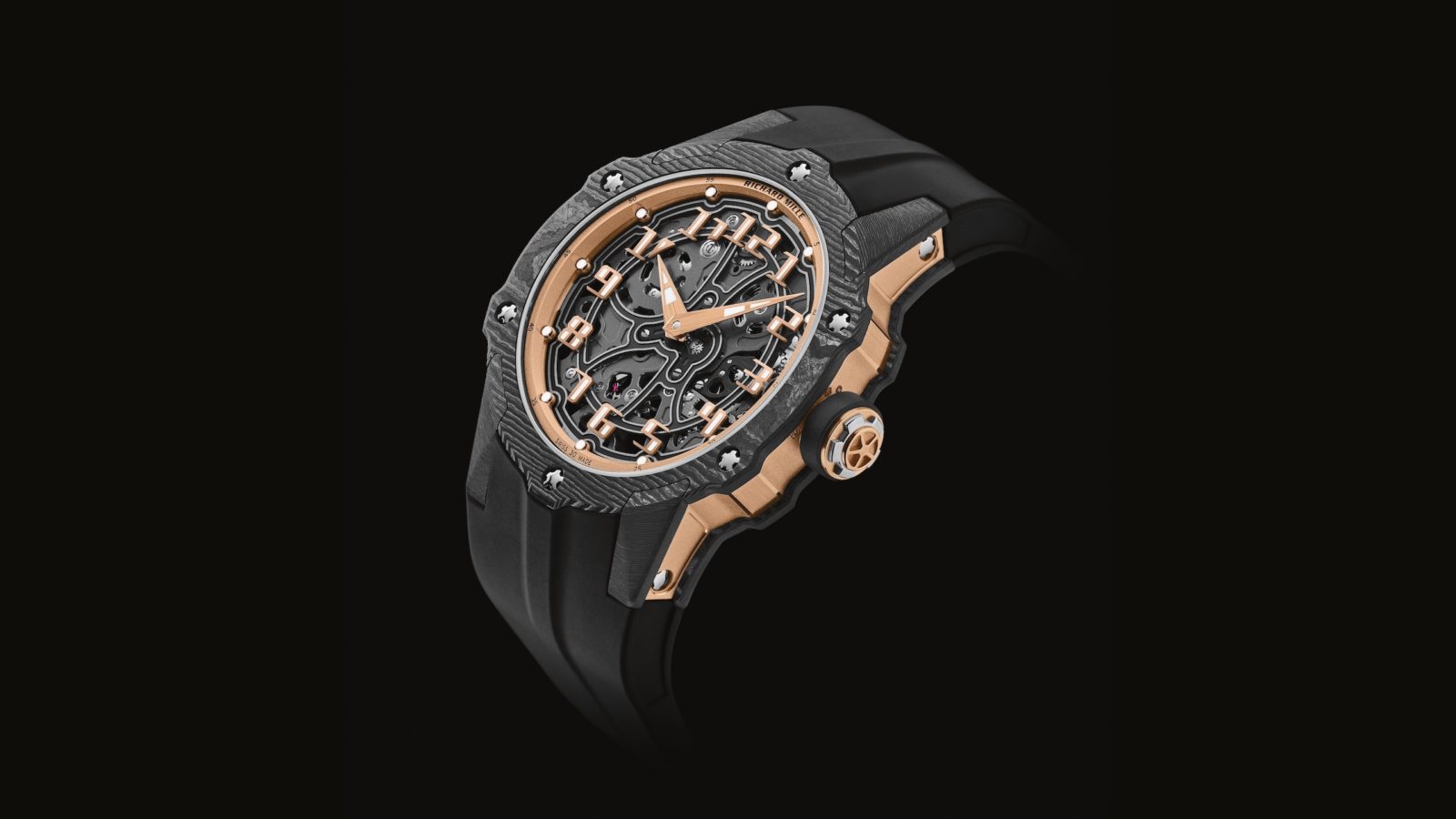 Watch enthusiasts will likely recall that back in 2011, Richard Mille — masters of gleefully over-engineered horology — released the RM033. With its rounded case and transparent inner workings, that release satisfied a niche in the brand’s wider portfolio, offering up a thin conventionally shaped wristwatch, reimagined with certain on-point supercar credentials.

Unsurprisingly, that watch proved to be a runaway hit for Richard Mille neophytes, and is now being revisited in the guise of the RM 33-02. Once again featuring a thin round case (sized at a universally wearable 41mm) and red gold metal, the RM 33-02 is another welcome addition to the ‘entry level’ Richard Mille canon — likely to flatter male and female wrists, whist offering a relatively restrained introduction to the brand.

Not unlike its predecessor, the central idea behind the RM 33-02’s design is how best to deploy quintessential Richard Mille tropes — innovative materials, unparalleled toughness, exorbitant hand-finishing — in an everyday context. The result is a watch that has been designed, from the ground up, for unisex wear; made to specifications that enable it to function seamlessly in both mundane and extraordinary situations. Just looking at the RM 33-02 in the metal, you immediately get a sense of this duality: the red gold mid-case alternately smoothing and accentuating the more familiar sight of Carbon TPT.

Similarly to its predecessor, the RM 33-02 occupies a unique position within the wider Richard Mille universe. It’s moderate in size, circular in form, and imbued with very forgiving proportions: all reasons why it’s a great ‘sleeper’ model for those collectors who might be otherwise intimidated by more emblematic Mille shapes (such as the tonneau).

If we’re talking from a totally technical perspective, the RM 33-02 holds to Richard Mille’s generally accepted reputation as a specialist in watchmaking à la Formula One. Including the peripheral element of rubber, over half a dozen high-performance materials are used in the production of this reference: including a platinum micro-rotor; titanium bridges; steel screws; and the aforementioned Carbon TPT.

Style
Weekly Obsessions: Sleeper’s perfect WFH pajamas, Autodromo Group B Series 2 Safari and more
Food & Drink
5 safe and stress-free ways to celebrate the Easter holiday in Hong Kong
Beauty & Grooming
La Prairie presents the latest chapter of White Caviar with an eye-contouring cream
Living
27 Questions: Arnault Castel, founder of Kapok
Food & Drink
7 art restaurants in Hong Kong for design-savvy dining
Food & Drink
Here’s how you can help local small businesses tide out the COVID-19 closures
Living
Give your home a gorgeous makeover with these four easy tutorials
Culture
Bored at home? Try these 30 things to kill the time
Living
How to Succeed: Philippe Delhotal, Artistic Director of La Montre Hermès
Sign up for our newsletters to have the latest stories delivered straight to your inbox every week.