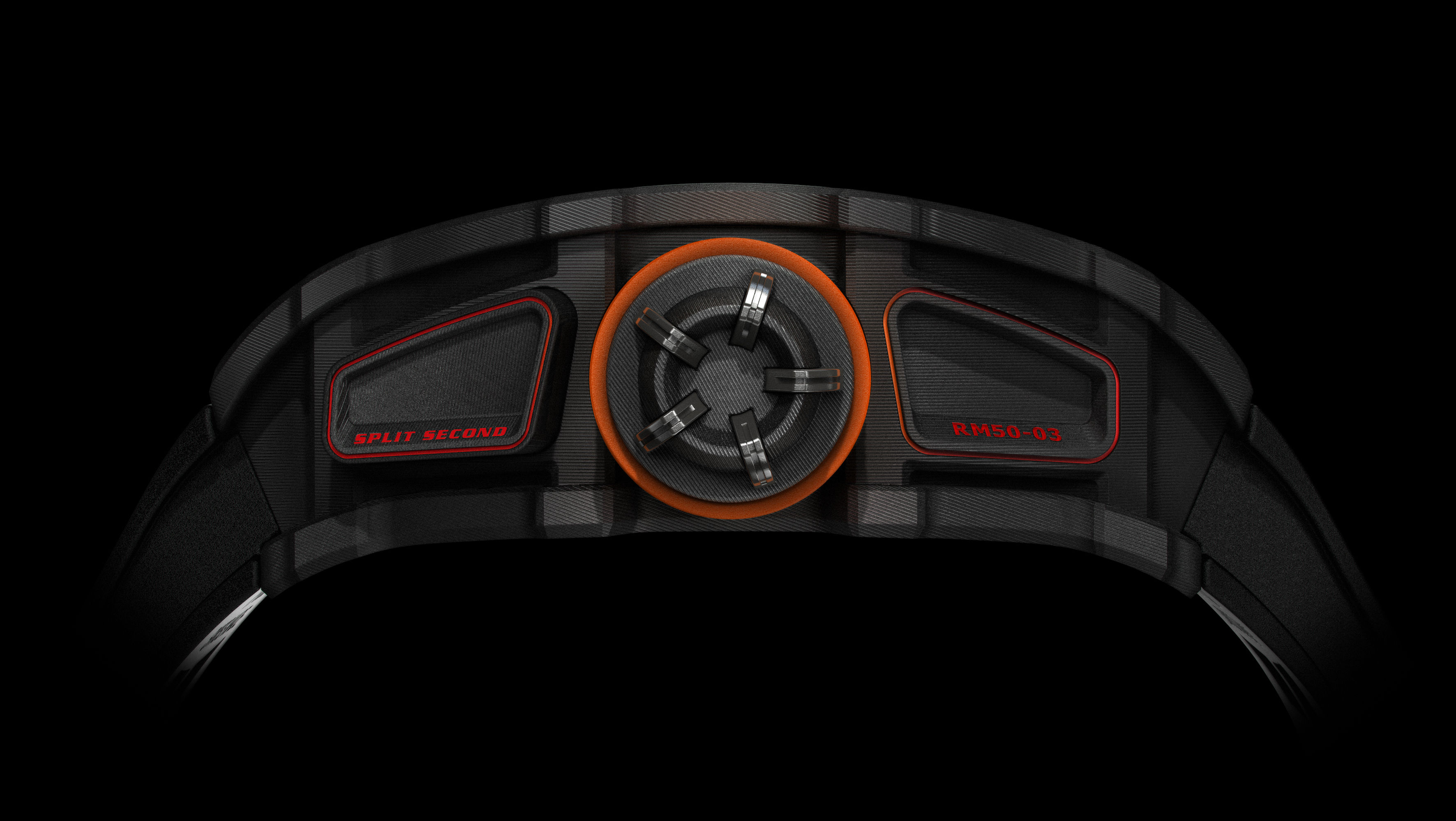 Ever since its first product release in 2001, eponymous Swiss watchmaker Richard Mille has had a taste for the cutting-edge techniques and materials used in advanced sectors like F1 racing. It’s no surprise, then, that the brand has formed a 10-year partnership with McLaren-Honda, the famed F1 constructor with a history of innovation and success. With a shared hunger for progress, perfection, and technical innovation, this is an ideal collaboration that has already yielded its first expression: the spectacular Richard Mille RM 50-03 McLaren F1 watch.

Equally impressive for watch lovers and gearheads, the new Richard Mille calibre is a technical masterpiece that blurs the lines between car construction and watchmaking, evident in the usage of a revolutionary nano-material called graphene. Six times lighter than steel and 200 times stronger, it’s currently being integrated into McLaren’s Grand Prix cars; inspired by this material, Richard Mille succeeded in producing a watch case machined in an improved form of Carbon TPT™ featuring the addition of graphene, resulting in the creation of Graph TPT™, a material used exclusively by this brand in the domain of watchmaking.

The resulting three-part case is highly resistant and extremely light, providing a striking appearance while preserving perfect ergonomics. The strap has also been optimised with the addition of graphene, which increases elasticity and improves resistance to wear and tear. Similarly, the use of titanium in McLaren Racing’s Formula 1 engineering build programme — due to its density, stiffness, and low thermal conductivity — is mirrored by the use of titanium in the watch’s 7-gram movement.

The physical design of the RM 50-03 McLaren F1, too, shares similarities with racing cars. Inspired by the wishbone suspension structure of a McLaren-Honda Formula 1 car, a transverse cage made of Carbon TPT™ is affixed to the caseband, supporting the entire calibre and enabling a perfect fit between the movement and case. Elsewhere, the hollow pushers of the chronograph are representative of the air intake ducts on the McLaren-Honda car, while the shape of the crown is inspired by the racing competition wheel rims used by the British team. Meanwhile, a function indicator on the watch’s face appears similar to a car’s gearbox, allowing the wearer to identify the winding, neutral, and hand-setting positions as the crown is pulled out.

The end result of all this innovation is the world’s lightest split-seconds tourbillon chronograph: the RM 50-03 McLaren F1 weighs less than 40 grams, including the strap. Aside from all the bells and whistles, this is a fine example of chronographic perfection. The combination of a tourbillon escapement with a split-seconds function within a single mechanism demands perfect transfers of energy, which led to research that yielded a superbly balanced torque. The movement’s performance and the quality of the energy delivered can be easily monitored via coloured indicators denoting the 70-hour energy reserve and torque sensor. Meanwhile, the design of a new split-seconds mechanism led to a staggering 50% reduction in the chronograph’s energy consumption.

This incredible new calibre with off-the-charts mechanical performance is available in extremely limited quantities: only 75 are available worldwide, and only from Richard Mille boutiques. Those who are fortunate enough to acquire one will find that the watch is accompanied by a 1:5 scale model of the McLaren-Honda racing car driven in 2017 by Double-World Champions Fernando Alonso and Stoffel Vandoorne — a nice little bonus for this amazing addition to any watch lover’s collection.

Style McLaren Watches Luxury Watches Accessories Tourbillon Watches Men's Watches F1 Chronograph watches Limited Edition Watches Richard Mille collector's watches Richard Mille Watches Richard Mille 50-03 McLaren F1 Watch McLaren-Honda
Michael Alan Connelly
Head of Digital Content
A Chicagoan by birth and a New Yorker by habit, Michael has more than a decade of experience in digital publishing at leading titles in the U.S. and Asia. When he's not checking out Hong Kong's newest restaurants and bars or jet setting around the globe, you'll find him hanging out with his dog Buster and enjoying an Aperol Spritz.
Travel Hotels Restaurants Cocktails Culture Italy Art Music Cheese
Sign up for our newsletters to have the latest stories delivered straight to your inbox every week.