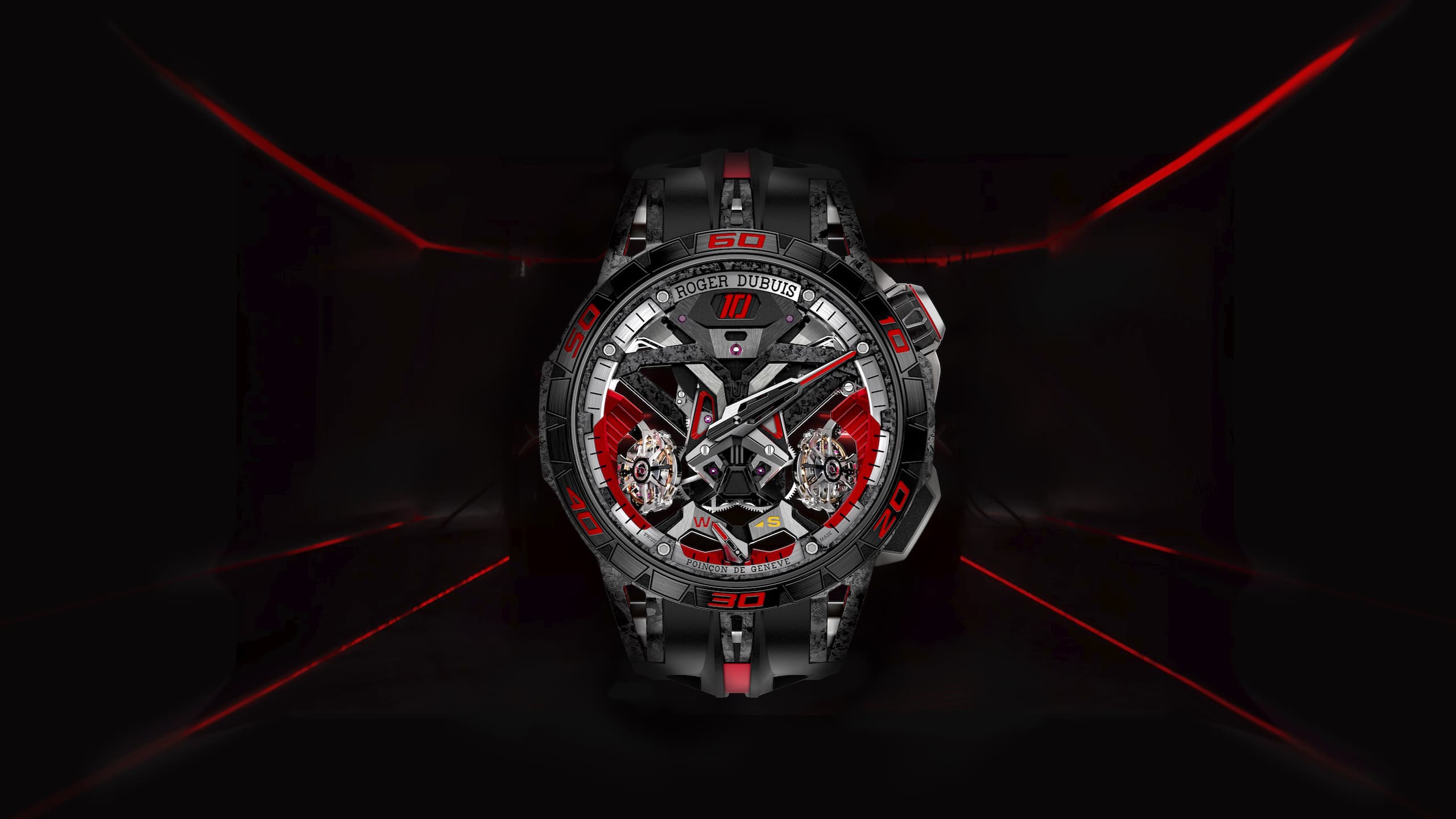 In a move that surprised no one, for SIHH 2019 Roger Dubuis presented a handful of novelties that were all inspired by the brand’s ongoing partnership with Lamborghini. Visitors to their booth at Palexpo were greeted by the angry countenance of the SC18 Alston hypercar — a teaser for the turbocharged releases that will be making their way to retailers later this year. The offering was more or less benign, maintaining the seven-year course which former CEO Jean-Marc Pontroué charted before his reappointment at Panerai.

Living
Q&A: Panerai’s new CEO Jean-Marc Pontroué on the definition of “luxury” and why long-term planning is overrated

The most accessible of the new novelties is the Excalibur Huracán, comprised of a general release model and 88 pieces of the Huracán Performante. Both are powered by the new calibre RD630, a skeletonised movement notable for its hexagonal bridges and tilted balance wheel (angled at 12 degrees). Like all Roger Dubuis designs, there was more than a whiff of the conceptual about these new Huracáns, but it was the aptly named Excalibur One-Off that drew the most buzz. Suffice to say, for the kind of collector who’s interested in synchronising their watch and Lamborghini penchant, Dubuis’ latest novelties are bound to hold appeal. For everyone else, it’s somewhat reassuring to see that, despite the extreme volatility of the industry in 2019, the Dubuis-Lamborghini partnership is still bearing fruit.

Designed to complement the custom-built SC18 (itself initiated at the behest of a VIP Lamborghini customer), the One-off was developed with technical input from two of Dubuis’ regular collaborators — Lamborghini Squadra Corse and Pirelli. The movement and dial architecture draw (at times exceedingly literal) inspiration from both sources, resulting in an object which utilises cutting-edge material traditionally reserved for motor racing. At a glance, the watch sports the same clean aggressive lines of the SC18, in addition to a skeletonised movement resembling a monocoque frame. Pirelli’s influence is most keenly felt in the periphery, with the One-off’s strap made from fibrous nylon which resembles the internal structure of a Lamborghini tyre.

The case itself echoes the paint scheme of the SC18, with red accents used throughout to enhance the visibility of functional elements (e.g., the jumping hour display and “function selector”) and emphasise kinship with Lamborghini dashboards. To ensure the watch maintains optimal weight and shock resistance, the same C-SMC carbon used in the SC18’s tubular frame finds multiple applications in the case, dial and movement. Notable elements that are not made with this blackened carbon include the titanium winding crown and the markers on the bezel (applied using red liquid ceramic).

The One-off is powered by the new RD106SQ, the third such experimental movement to be made with technical input from Pirelli and Squadra Corse. Visible from both sides of the case, the RD106SQ’s signature complication is a 90-degree, V-shaped, double flying tourbillon, meant to resemble the inclined layout of a Lamborghini engine block. As seen above, the One-off also forgoes traditional hours & minutes for a jumping aperture (12 o’clock) and single, red-tipped minute hand. These indications can be set using a winding crown which (incidentally) never has to be pulled out to the conventional 1-2-3 position, thanks to the dashboard style-function selector (6 o’clock). Wearers are able to switch between setting the time (“S”) and winding the mainspring (“W”) at the touch of a pusher, located on the caseband at 4 o’clock.

Further additions to the Excalibur collection

Even by Roger Dubuis’ standards, anchoring a whole SIHH presentation around a single limited edition would have been audacious. Luckily, the brand followed its announcement of the Excalibur One-off with a relatively more attainable release based on the Lamborghini Huracàn. Intended to fill the same niche that its entry-level namesake does, the new Excalibur Huracàn demonstrates many of the same design codes that are at play in the One-off. Its powered by a skeletonised movement which — while not equipped with double flying tourbillons — is immediately recognisable thanks to the inclined balance wheel, visible on the dial. Similarly, thanks to a strut-shaped movement bridge, the watch immediately draws comparisons with the Huracàn, which is known for its similarly shaped V10 engine.

The movement in question is the new calibre RD630: the second Excalibur movement (since 2013) to make use of an angled balance wheel — said to resemble the movement signature of Lamborghini Squadra Corse. The vehicular theme is continued on the caseback, where the highly polished rotor mimics the spinning rims of the Huracán whilst in motion. As we mentioned earlier, the RD630 finds its way into two new Excalibur Huracáns. Both versions are practically identical (i.e., featuring two barrels and the signature 12 degree balance wheel) with the limited edition Huracán Performante being noticeably more colourful. The latter (limited to 88 pieces worldwide) features a number of yellow display elements, offering something with a little bit more “oomph” on the wrist than its stealthy, entry-level sibling.

The Roger Dubuis Excalibur One-off is available in a limited edition of 1.

The Roger Dubuis Excalibur Huracán Performante is available in a limited edition of 88.