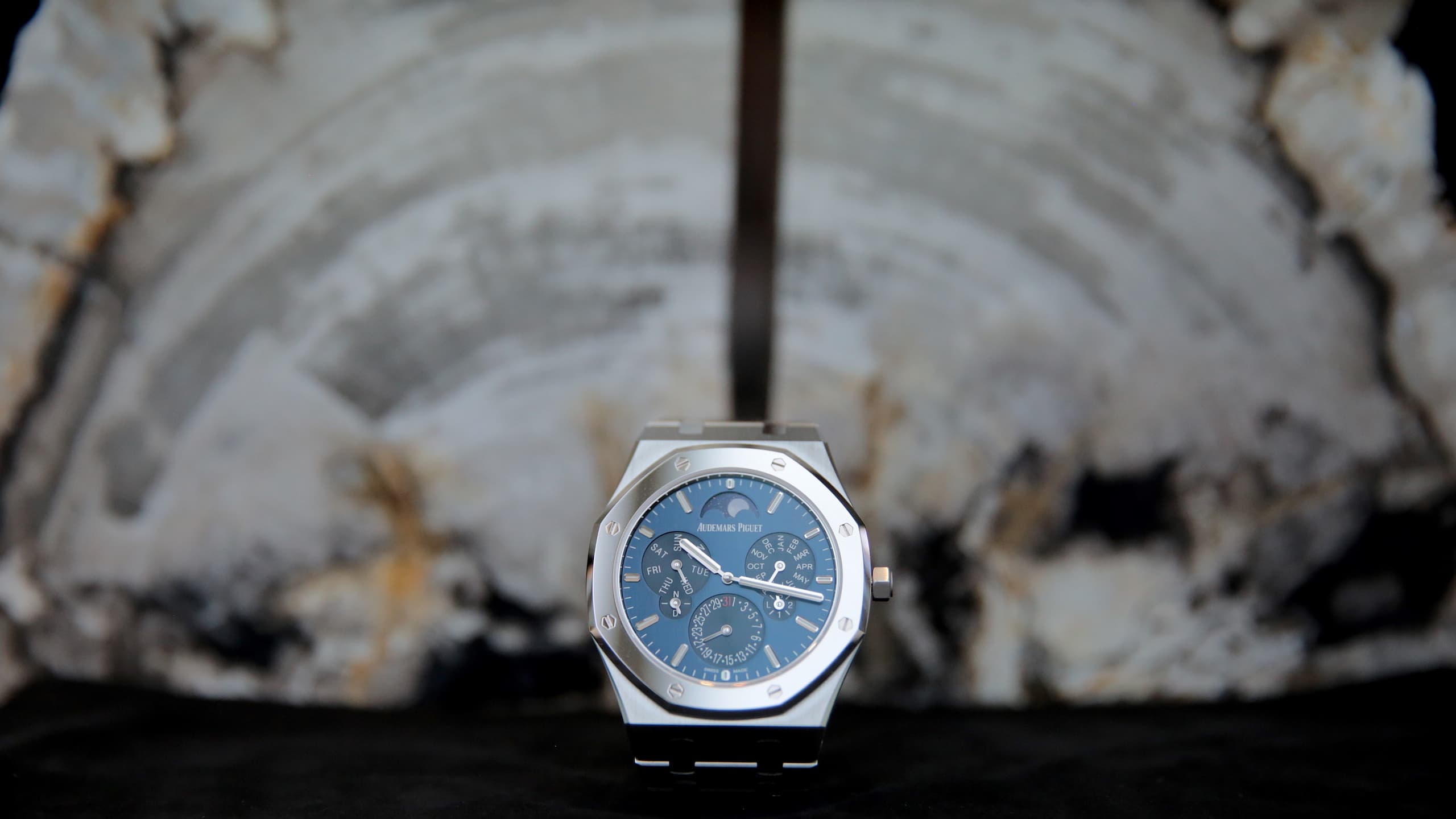 When it comes to the intricate and relentlessly competitive discipline of ultra-thin watchmaking, Audemars Piguet is something of an expert. Commencing with pocket watches in the early part of the 20th century, the Le Brassus watchmaker has carved out a reputation for making extremely thin complicated timepieces. (The Ref. 25643, for example, is still the thinnest self-winding tourbillon wristwatch ever created.)

We can’t stress this enough: When you’re working in a millimetric format that measures in the single digits, even the simplest time-only movement becomes challenging to make. Design/manufacturing tolerances are punishingly low at this scale — and that’s before even broaching the subject of fitting in the complications, all without increasing the watch’s overall size. So when AP announced that they’d managed to successfully engineer a perpetual calendar Royal Oak with a 2.89mm thick movement, it was something we had to see in the metal.

A ‘concept’ watch that doesn’t dumb itself down

Based on a concept watch which was unveiled at SIHH 2018, the Royal Oak Selfwinding Perpetual Calendar (RD#2 for short) is AP’s latest shot across the bow in the field of ultra-thin watchmaking. At an impossibly svelte 6.3mm — the movement accounts for just over a third of the total size — it’s the world’s thinnest perpetual calendar, realised over a 5-year period through a combination of unconventional engineering solutions and cutting-edge technology. A serialised production model, the new RD#2 is underpinned by the same mechanics used in the development of its predecessor — something of a rarity in the commercial side of watchmaking.

The changes which AP’s designers have instituted are intended to improve the user experience: the case and bracelet are now fully fashioned from titanium; whereas platinum is used as an ‘accent’ throughout the watch’s bezel and centre links. AP have pointed out that this construction makes the production model RD#2 much lighter on the wrist, with the various metals acting as a showcase for the brand’s high-level finishing. (The majority of the case is brushed vertically, whereas the platinum ‘accents’ are polished.)
Several collectors have observed that the RD#2’s dimensions actually recall the geometry of the original Royal Oak ‘Jumbo’. The sharp, symmetric, carefully integrated surfaces certainly support this comparison, but the RD#2 evinces a degree of finishing that is an order of magnitude more sophisticated (in no small part due to the case’s relative thinness). Bevelling used to decorate the lugs and flanks is amongst the best in the industry, and enhances the innate knack of the Royal Oak design to channel environmental light in interesting, aesthetically pleasing ways.

Moving over to the dial, the basic layout of the RD#2 remains unchanged. Again, the biggest shakeup is an aesthetic one — with AP eschewing its signature petite tapisserie in favour of a satin-brushed finish which comes across as more functional. Although the depth and texture afforded by the former are gone, the satin blue dial is actually a more effective backdrop against which to display key information across the various sub-dials. Given that the RD#2 has even more calendar functions than its regularly sized counterpart, a sense of visual tidiness is imperative.

Calendar indications are positioned around the dial’s quarters: the moonphase is located at 12 o’clock; whereas the day, date and month displays take up the 9, 6 and 3 o’clock positions respectively. Leap year and AM/PM indicators are located in even smaller sub-dials that are positioned at 4 and 8 o’clock.

A groundbreaking new movement, inspired by icons of the past

Like many of the watchmakers who are innovating in the ultra-thin space, AP determined that the best way to make its complicated movements smaller was to fundamentally alter their architecture. The goal behind the calibre 5133 — the 2.89mm thick movement powering the RD#2 — was therefore to reduce the traditional perpetual calendar’s three-storey architecture down to a single plane. AP engineers turned to the historic calibre 2120 for inspiration: a self-winding Royal Oak movement, modelled on one of Jaeger-LeCoultre’s ultra-thin designs.

As a starting point, the calibre 2120 incorporated various components that functioned as space-saving measures: the rotor was noticeably wide (and as a result, thin); while the barrel was ‘suspended’ (i.e. affixed using a pivot, directly to the movement’s mainplate). To minimise the risk of friction which goes hand-in-hand with the use of a peripheral rotor, the calibre 5133 was designed with a beryllium ring along its edges. The ring acts as a sort of ‘rink’ — around which the rotor (equipped with ruby rollers) is able to achieve a glide-like motion.

In order to achieve the wafer-like thinness needed for the RD#2, it was also crucial to rethink the individual parts that make up the perpetual calendar complication. To that end, many of the wheels and cams that make up the calendar portion of the calibre 5133 are designed to serve multiple functions. Case in point: in a conventional calendar movement, the month wheel is only designed with 12 steps (one per month); and in order to account for leap years, this is combined with a 4-year cam. To reduce size, the calibre 5133 instead uses a single 48-step month wheel — wherein depressions of different depths are used to indicate the variable timespan of each month. The most shallow depressions indicate a regular 31-day month, whereas the deepest notch is used to represent February during a leap year (i.e. 29 days).