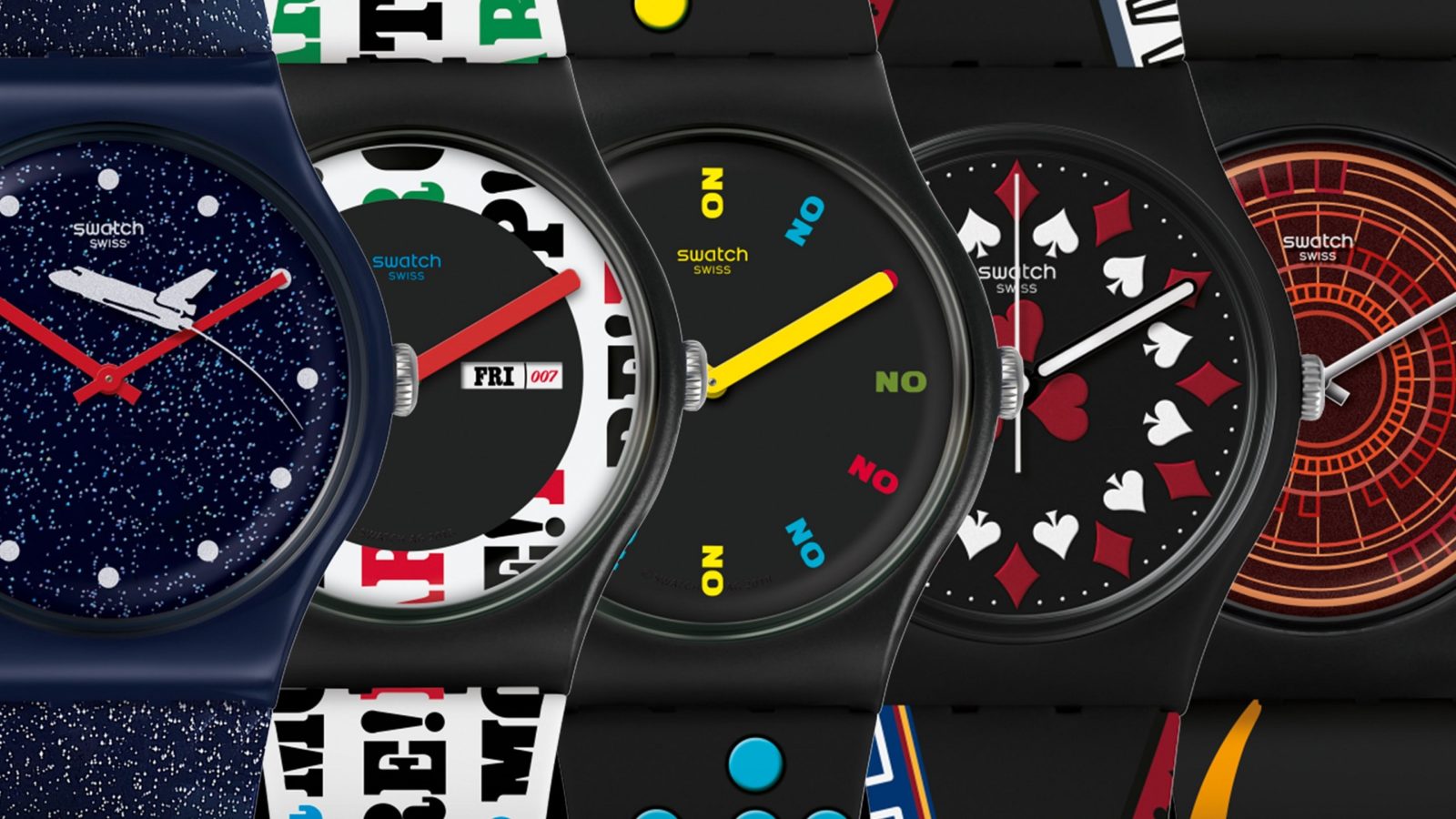 In the run-up to the highly anticipated 25th installment of the James Bond franchise, Swatch releases the ‘Swatch x 007’ capsule — half a dozen visually punchy quartz timepieces, inspired by the iconic hero’s previous on-screen missions.

Adding to the buzz surrounding the upcoming 25th installment in the James Bond franchise — No Time to Die, confirmed to be actor Daniel Craig’s last outing in the role — Swatch has just unveiled its latest 007-themed capsule. The new Swatch x 007 collection celebrates, in graphic detail, six of the eponymous British super spy’s previous on-screen outings. Each timepiece features imagery inspired by the title sequence and artwork of Bond films ranging from 1962 (Dr. No) all the way up to the aughties (Casino Royale). Punchy and affordable, these represent an excellent foil to the significantly pricier — not to mention grossly unattainable — Seamaster 300M which will be adorning 007’s wrist come April.

The new capsule of Bond-themed watches isn’t the first time Swatch has paid tribute to Ian Fleming’s iconic British spy. Previously, the brand commemorated the franchise’s 40th anniversary with a slew of releases; and in 2008, even created the ‘007 Villain’ collection — an honest-to-God briefcase full of Swatches inspired by classic Bond adversaries like Ernst Stavro Blofeld and fan favourite Jaws.

Each watch itself is technically straightforward, as is to be expected, and is powered by a hi-precision quartz movement, assembled and manufactured by Swatch Group. On the wrist, all Swatch x 007 models offer simple time-only functionality (thanks to the no-nonsense minute-and-hour handset) and come equipped on sweat-resistant silicone straps. In addition, each comes in one of two sizes — depending on the specific Bond film that’s being depicted.

The Licence to Kill, Casino Royale, and Dr. No editions are all offered in what Swatch is calling the ‘Original Gent’s’ format — measuring a discrete 34mm in diameter. (Assumed gender aside, this makes the aforementioned three models an excellent option for watch-wearing ladies who are fans of the franchise.) Conversely, the Moonraker, World is Not Enough and Her Majesty’s Secret Service models clock in at a significantly bigger 41mm — making up what’s fittingly dubbed the ‘New Gent’s’ portion of the capsule.

Swatch has announced these 007-themed editions will be available in stores sometime in late February — well ahead of the 30th April release date MGM are currently touting for No Time to Die.

Intriguingly, the brand also mentioned that there’s a seventh model in the capsule slated for an April release, in order to coincide with the film’s launch. Created in collaboration with costume designer Suttirat Anne Larlarb, this particular Swatch has the distinction of being sported on-screen, by none other than Ben Whishaw. The British actor once again reprises his role as Q — the MI6 quartermaster who supplies 007 with a never ending arsenal of gadgets and weaponry.

Adding to the nostalgia associated with these classic James Bond adventures, each 007-themed Swatch is delivered in packaging that’s reminiscent of a VHS cassette box — a sight that will be familiar to Bond fans of a certain age.

Merchandise, in all of its various guises, has always been a big part of the James Bond universe, with watches figuring prominently both on and off-screen. Since 1995, OMEGA has been putting its Seamaster line on the wrists of successive 007 actors, so it makes perfect sense that modern cinemagoers are now being treated to the on-screen appearance of its fresh, lighthearted sister brand.

The Swatch x 007 collection will be available in stores in February. All models are priced at (approx) HK$815. To learn more, visit Swatch Hong Kong online.

The 10 best hotels to stay at in Phuket