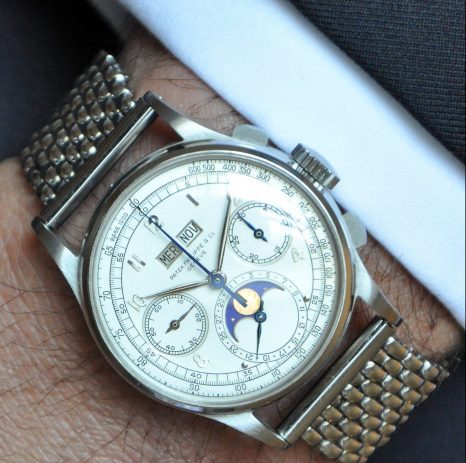 This expensive timepiece sold for HK$84.5 million and broke a world record

Style
This expensive timepiece sold for HK$84.5 million and broke a world record
Share this article
Next article

A number of global records were set at the recent Phillips watch auctions in Geneva, notably beginning with the Geneva Watch Auction: FOUR on 12 and 13 November, which dropped jaws as Phillips in association with Bacs & Russo — the world’s leading watch auction house — set the world record for highest result ever achieved for any wristwatch at auction, thanks to the sale of the legendary Patek Philippe Ref. 1518 in stainless steel.

Selling for a cool CHF 11,002,000 (HK$84,555,633) in just under 13 minutes, the stainless steel 1518 made up almost a third of the total sales of 117 watches throughout the two days. This also included two other timepieces from the much venerated Patek Philippe 1518 ‘trilogy’ — a pink gold and a yellow gold which sold for a combined total of close to HK$16 million.

Why did the top lot grab such a hefty price tag? The incredibly rare Patek Philippe 1518, a perpetual calendar chronograph wristwatch with moon phase, was made in 1943 and is only one of four examples known in the world. Just for comparison’s sake, HK$84.5 million in Hong Kong can get you 100-plus Birkin bags. Over 100,000 iPhone 7 Pluses (256GB too). And… just almost a four-bedroom penthouse at Casa Bella on Caine Road. Worth it for a watch?

In the following weeks, timepiece fanatics continued to be transfixed as Phillips brought the global watch sales to Hong Kong, where the record breaking streak ensued.

At the first-ever themed watch auction in Asia by Phillips, ‘Rolex Milestones: 38 Legendary Watches That Shaped History,’ on 28 November 2016, the Stainless Steel Rolex Ref. 8171 ‘Padellone’ sold for close to HK$8 million, which shattered the record for most expensive Rolex ever sold in auction in Asia. The next day at the Hong Kong Watch Auctions: THREE, Phillips rounded off the year’s watch sales by realising a total of HK$136 million. Combined with the previous night’s Rolex auction, the season’s sales achieved nearly HK$200 million.

That’s a lot of money spent on watches for a month, to say the least. Like some might say, money can’t buy you time, but for a certain few wealthy bid-winners, it likely bought them a whole lot of happiness…

Hong Kong Timepieces Rolex Luxury Watches Men's Watches Geneva Patek Philippe Phillips Auctions
Evelyn Lok
Managing Editor
When not trying out the latest beauty and wellness trends, Evelyn is likely enjoying a perfectly balanced negroni or exploring some of Hong Kong's best new places to eat and drink. At Lifestyle Asia she covers everything from the biggest events in town to interviews with Hong Kong specialists, with topics spanning art, food and drink, health, tech, and travel.
Beauty Wellness Events Art Drinks
Sign up for our newsletters to have the latest stories delivered straight to your inbox every week.