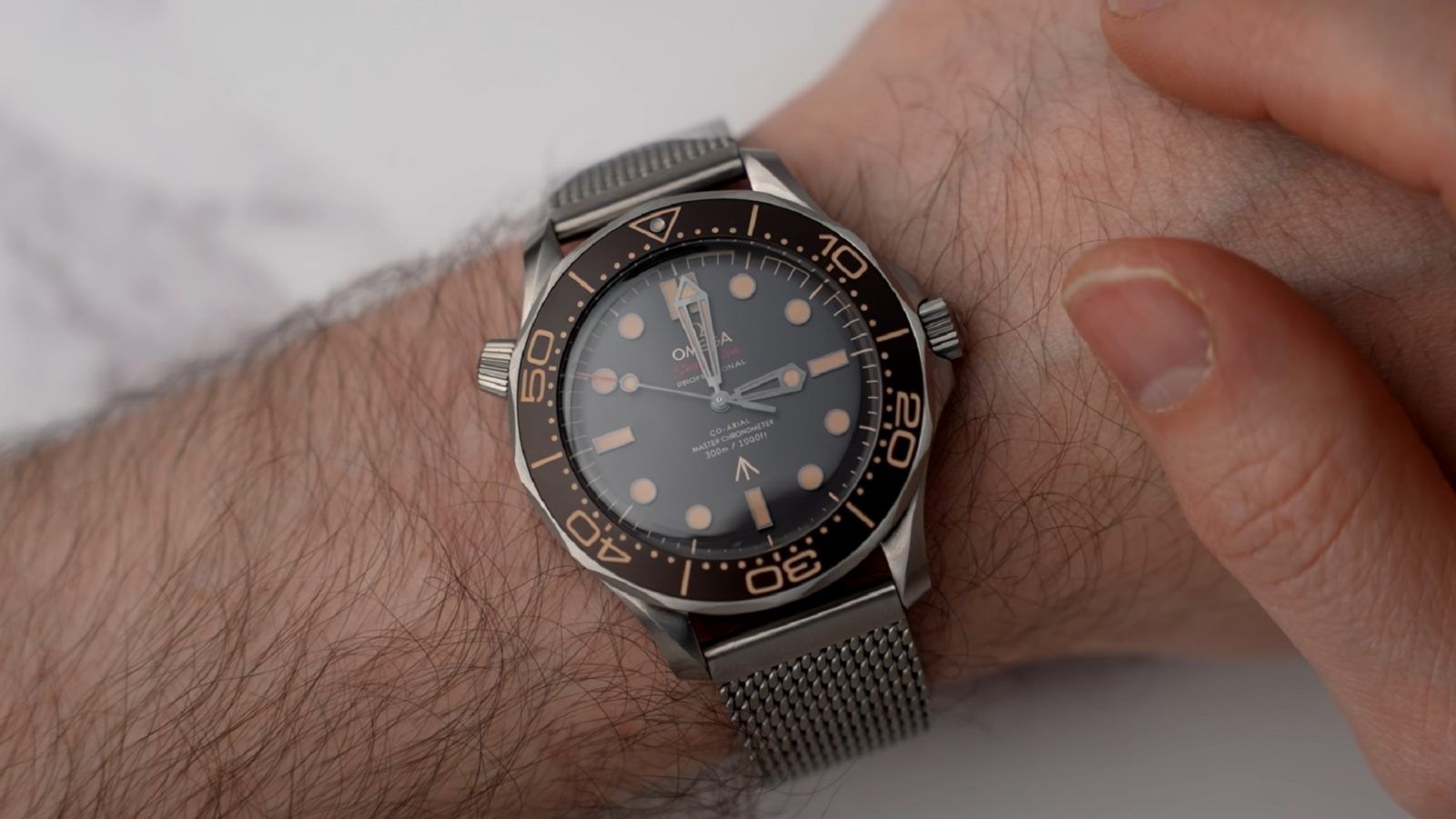 For quite some time, a set of luxury watch YouTubers has been garnering a lot of praise for their insightful videos showcasing high-end timepieces.

Their content is all about the world’s finest wristwatches by brands, including Rolex, Omega, TAG Heuer, Hublot and Breitling. Interestingly, some of these vloggers are watch dealers as well.

Through beautifully shot videos, crisp narration and clear details, these YouTubers are helping change the landscape of luxury watches by widening their scope through their subscribers.

Meanwhile, others make the experience fun on their YouTube channels, with interesting commentaries on whether the watches are worth buying.

From excellent orators to honest reviewers, here are some of the best luxury watch YouTubers.

Barker is one of the most renowned luxury vloggers on YouTube who does watch reviews and talks about horology. He is the creator of the acclaimed YouTube channel Bark & Jack.

A former corporate trainer, the Briton has over 211K fans on his own YouTube channel, which he started in 2017. His subscribers watch him speak about some of the best watches by top brands such as Omega, Rolex, TAG Heuer, Hublot, Breitling and Grand Seiko, from Swiss and Japanese markets.

The ‘About’ page of Barker’s YouTube channel says, “Simply me drinking coffee and talking about watches,” and he does exactly that in his videos — takes sips of the beverage while casually commenting on the latest in the world of watches. Although he keeps the videos short, Barker tries to cover all aspects of a watch, with a dash of British humour.

The videos also include some of the most well-known timepieces and collaborations. In one, titled “Omega x Swatch Speedmaster MoonSwatch LOVE & HATE”, he talks about the famous collaboration between Omega and Swatch that was released in March 2022.

But among his most notable videos is his review of the Omega Seamaster Diver 300M 007 Edition that Daniel Craig wore in the James Bond film No Time To Die (2021).

On his website of the same name, Barker sells straps and watch accessories, as well as enamel Bark & Jack coffee mugs.

Baldassarre, who is from Cleveland, US, has more than 500K subscribers on his eponymous channel and is one of the most prominent luxury product sellers on YouTube. He also runs an e-commerce website, named Teddy, where he sells timepieces by luxury watchmakers such as Zenith and Longines.

On the channel, Baldassarre showcases some of the finest watches. Interesting reviews and insightful discussions, in which guests, such as Canadian entrepreneur Kevin O’Leary, feature in one of the videos as well. The YouTuber joins O’Leary to explore in fine detail a range of Omega’s 2022 releases and the MoonSwatch.

Baldassarre also conducts interviews with industry leaders and those associated with the watch-making business. In March, he spoke to Guiseppe Miccio, Head of Product Development at Longines, in New York City about the 2022 releases by the Swiss luxury watchmaker, such as Legend Diver, and a GMT version of the Spirit known as the Zulu Time.

Elle is perhaps one of the few women among YouTube luxury vloggers who focus on watches. She keeps things casual, speaks in a pleasant voice and explains the features of some of the finest luxury brands in the world of horology in an easily understandable manner.

A German, Elle completed her studies in Scotland and is fluent in English. She is also part of the German-language watch YouTube channel, WATCHVICE, which she runs with her husband.

One of the famous names among luxury products YouTube influencers, she has 250K subscribers on her channel. Her goal is “to focus on creating a platform for EVERYONE who likes watches — no matter for what reason!” as the channel states.

On the Jennie Elle channel, she has reviewed Watches & Wonders 2022, Rolex novelties of 2022 and the Omega X Swatch MoonSwatch, among many iconic timepieces. Her video about Swatch x Omega MoonSwatch Mission to the Moonwatch has been viewed over 1.3 million times.

She has convincingly spoken about why the Audemars Piguet Royal Oak Perpetual Calendar is worth its price tag of USD 300,000. And when her husband gifted her a Rolex Oyster Perpetual ‘Candy Pink’ in 2020, Elle reviewed that too.

In a video posted in 2019, Tristano G. Veneto, or TGV as he is better known, introduced his channel, The Urban Gentry. He described it as a place where people from diverse backgrounds from around the world “are bonded and united together by respect, admiration and passion with the story of horology.”

On one of the most active watch channels, TGV posts videos every week. In his videos, he not only talks about luxury watch brands, such as Omega, Rolex and Breitling, but also informs his subscribers about affordable watches.

On an average, each video is around 20 minutes long. However, some of them, such as the one on the most underrated watch brands in 2022, are about an hour long.

Occasionally, TGV also shares interesting videos on various topics that would cater to a much larger audience. These include “The Power, Secret Meaning & History: Why Gentlemen, Gangsters & Entrepreneurs Wear Pinky Rings” and “Which Sunglasses Are Best? Persol Or Ray-ban – Why Handmade Quality Always Wins Over Luxury Branding.”

The name of Goodman’s channel certainly has a ring to it — The Time Teller. One of the best YouTube channels for watch lovers, it has garnered over 185K loyal fans who get to see everything, from reviews and commentaries to news and live streams.

Goodman, who runs a website of the same name selling vintage luxury watches, says that he was attracted to timepieces from the age of eight when his father gifted him an LL Bean Dial Hamilton Field Watch.

“Even at a young age I associated wristwatches with people I’d see on TV or in movies — from race car drivers to James Bond, something about wearing a watch made me feel ‘cool’ and ‘grownup’,” he says.

The idea to launch his YouTube channel came to Goodman in 2017, after fellow watch collector Patrick enquired about his Rolex Bubbleback #2940.

Goodman is known for his brutally honest views on the timepieces he is reviewing. For instance, in his review of Bulgari Octo Finissimo Ultra, the world’s thinnest watch, Goodman found the QR code on the dial and the watch’s corresponding NFT release as “kinda stupid,” because of their apparent lack of utility.

Additionally, he takes into account viewers’ opinions and readily rectifies his stance when in the wrong. “Was I Wrong About G-Shock’s CasiOak? (Yes.)” reads the title of one of his videos, where he candidly admits to revising his thoughts on Casio watches.

Other than luxury timepieces, such as Omega Aqua Terra, he also reviews affordable quartz watches. Overall, viewers find his YouTube videos unique because of his free-style speaking, with a dash of humour.

Robert Stewart of Random Rob is one of the oldest YouTube luxury vloggers. He launched the channel in 2006 and has amassed over 65K subscribers. In his approximately five-minute-long videos, he talks about some of the most beautiful luxury watches.

Most of the videos are the ‘unboxing’ kind, where Rob shows his latest novelty to his subscribers and shares his views on them. Occasionally, he also holds over an hour-long live stream with his subscribers, showing them what he does in his ‘watch room’.

Keeping his style simple, Rob ensures that the videos have no long monologues or distractions such as jump cuts or animations. Viewers get to see the watch clearly and up close.

From luxury watches, such as Breitling and Omega x Swatch Mission to Uranus, to cartoon-themed watches, like Vario ИAVI x Popeye and a series of Seiko watches, Rob covers them all on his channel.

Oleg is a human and Mr. Bond is an adorable French Bulldog, making them one of the most interesting YouTube luxury vlogger duos. Their channel, 24Hours At A Time, is all about luxury watch reviews, discussions and commentaries.

There are objective reviews about the pros and cons of each watch as well. The videos indicate that Oleg prefers talking about sporty watches, especially those with dive bezels.

Rolex, Tudor, Omega and much more — viewers will find them all on 24Hours At A Time. The 37K subscribers get to see details of affordable watches, such as a Casio under USD 100, as well.

Of course, all the work is done by Oleg. Mr. Bond likes resting next to him on the couch. But fans of Mr. Bond can get Bond Nato straps from the website named after the dog, too.

A master at influencer marketing on YouTube, Patrick Marlett is behind TakeTime — one of the best watch vlogs on the video content platform. Since its launch in 2017, Marlett has covered a range of watches, from simple ones to luxurious gems.

There are also videos in which Marlett talks about vintage watches and bracelets. Since November 2021, he has been associated with the blog, Worn & Wound, as a media producer and first appeared on their podcast ahead of the Watches and Wonders 2022 event in Switzerland.

Luxury Watches Youtubers Watch Influencers
Manas Sen Gupta
Manas enjoys reading detective fiction and writing about anything that interests him. When not doing either of the two, he checks Instagram for the latest posts by travellers. Winter is his favourite season and he can happily eat a bowl of noodles any time of the day.
Travel Culture Entertainment Food
Sign up for our newsletters to have the latest stories delivered straight to your inbox every week.