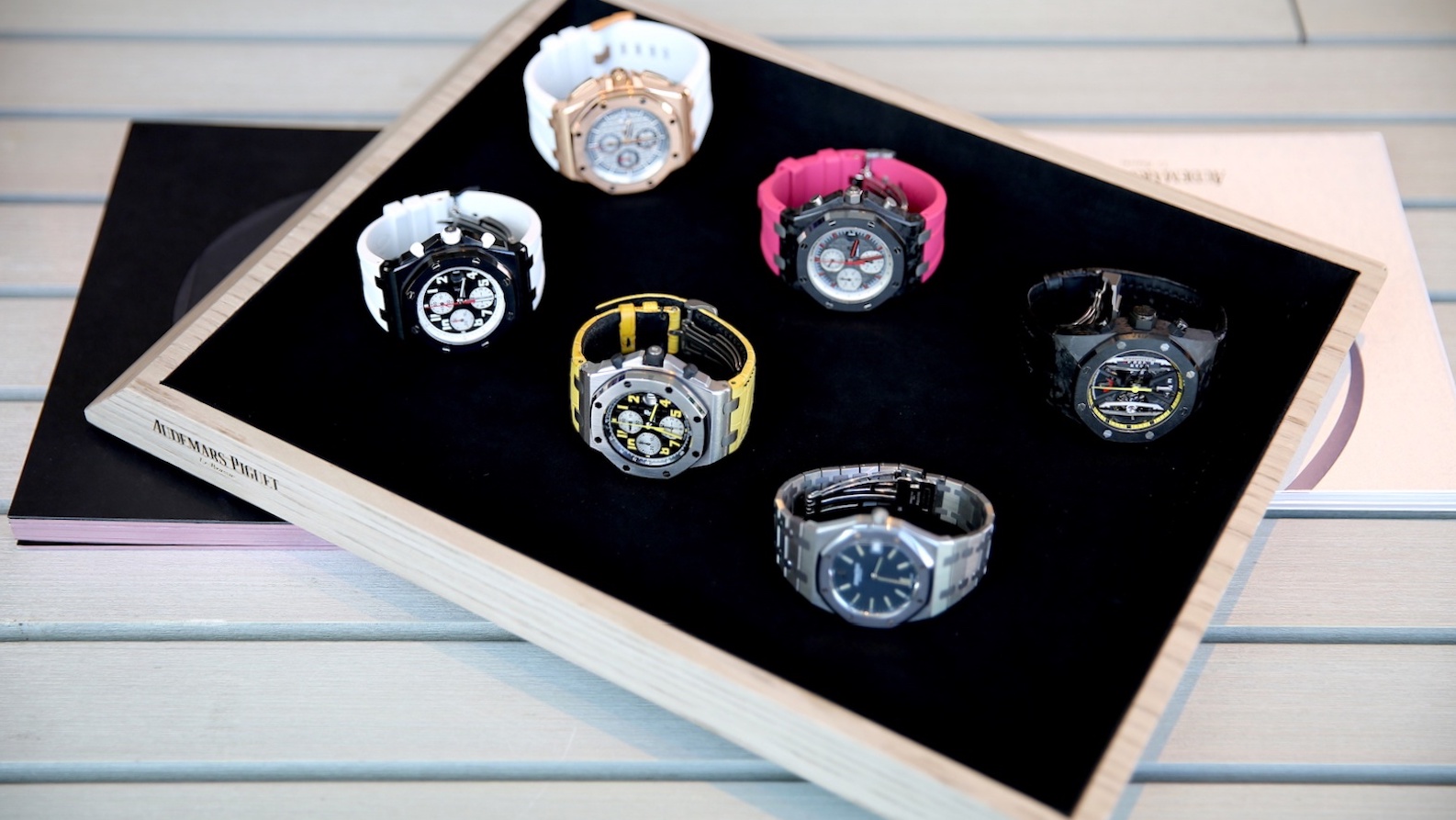 In Wrist Watch — our monthly column dedicated to ‘watch spotting’ in the wild — resident horology enthusiast Randy Lai chats to key individuals whose collections exhibit some aspect of excellence (e.g. craft, rarity, historicity). Last week, we dropped into AP House for a brief chat with Dominic Tsun — a retired corporate lawyer now teaching professional development, who just so happens to be one of the +852’s most prolific Royal Oak Offshore collectors.

Like many eminent collectors of his generation, Tsun is in no hurry to impress anybody. On the day of our shoot he arrives fashionably late, wearing a seemingly haphazard ensemble of linen sportcoat (from Hermès Tokyo); weatherbeaten denim; and festooned Jack Purcells. His look is one of easy confidence — of a man who is entirely in control. There is, of course, an explanation for this: for nearly a decade, Tsun presided over one of the biggest capital markets practices in Hong Kong, as senior partner for the U.S. law firm Kirkland & Ellis. Before retiring in 2017, he regularly worked on IPOs valued at HK$2-3 billion, honing a style of lawyering known for its assertiveness and attention to detail — all essentials for the cool-under-pressure game that is corporate finance. His secret? Timing. “Having been a lawyer for so long”, says Tsun, “I think time is one of the most important things. Making better use of time enables you to make better choices — and that’s something that really appeals to me”.

Fortunately, the rigours of Tsun’s professional life — weeks of travel, innumerable deadlines, a constant stream of new information — demanded precise timekeeping, which in turn informed his attitude towards collecting. “To some extent, [they’re] the same,” says Tsun. “Both are about acquiring knowledge, making informed decisions and then ultimately, becoming ‘good’ at whatever it is you’re doing.”

With a personal collection of close to 200 pieces (in which the Royal Oak Offshore plays a starring role) to say that Tsun is ‘good’ at collecting feels like an understatement. Below, we invite you to explore a handful of the pieces that he brought along for us to shoot — if you like a larger chronograph, there’s plenty here that we think you’ll enjoy.

“This watch was part of a limited edition of 500. Back in the day, 500 was neither a small nor a huge number — AP used to make limited runs of as many as 2,000 pieces. What’s interesting about this one is the bezel: it’s an alloy called cermat, which is a kind of ceramic metal. It’s particularly shiny, especially in the right kind of light. The strap I’m currently wearing is different to the plain anthracite rubber that came with the watch. AP made this strap to commemorate Stan Wawrinka’s U.S. Open win, but did so without attaching it to any particular watch. I was lucky enough to own a couple of the Wawrinka straps and I chose to pair one of them with this Jarno Trulli limited edition — despite the unusual colour combination, I like it a lot. When you flip the watch over, you’ll notice that this is numbered ’13 of 500′ — I’ve always like the number 13, so acquiring this particular piece was a no-brainer.”

“This particular model came out of the AP Kuala Lumpur boutique. Officially it’s the ‘Jalan Bukit Bintang’ — named for the boutique’s location — but amongst collectors, it’s affectionately called the ‘Bumblebee’ (not to be confused with the similar looking and much rarer Ref. 26176). Of all the Offshores that I own, this is the only one that features coloured screws in the bezel. I quite like the rounded pushers in rubber — which gives this Offshore a more traditional feel. The strap is original, though AP also included a black variant with yellow stitching. This was the first piece I acquired that had a yellow theme. In terms of wear, it’s still one of my favourites: I like the contrast between the black and the extremely bright vibrant yellow.”

“I bought this Byblos edition in France — one of the 50 that actually has the eponymous Saint-Tropez hotel’s logo printed on the caseback. The reason I love this watch so much is because of the warm rose gold tones (warmly coloured metals are something that’s done extremely well at AP). At time of release, it was one of the ‘cheapest’ AP models you could find that combined white rubber with a case in precious metal — that usually involved some kind of high complication that would have been extremely expensive. Interestingly, despite the model’s origins, the only 50 Bybloses that are available in France are those with the printed caseback. The remaining 450 pieces sold outside of France are technically the same watch, although the caseback is different.”

“This looks like a 15202, but is actually a limited edition that was made for WatchProZine — a notable forum for collectors that later morphed into The Purists. Back in the day, they thought that they could make 10 Royal Oaks and sell them directly via the website. What distinguishes this from a standard 15202 is the bezel and vertical bracelet links, both of which are tantalum. (If you look at the piece under the correct lighting, you’ll notice some of the metals throughout the case are darker.) The case meanwhile is in titanium.
On the back, the rotor is also different — finished with an engraving (‘P10’) that you wouldn’t normally see. I picked this up in 2012 from a store that I’d previously purchased from. Initially, when they showed the piece to me, I thought “why would I want a very plain Royal Oak?”. Then I saw the price tag and started to become curious. It’s one of the very few times I’ve acquired something because it was limited.”

“I acquired this particular Concept model while I was in Tokyo. Rather than having the conventional round sub-dial that you’d normally see in a chrono, the indications go vertically down in order to record the minutes. Still, you need a loupe — no matter how good your eyesight is, this display type is very hard to read. Being one of AP’s Concept pieces, it’s a little bigger than average; and aside from the linear chrono function, features a tourbillon and forged carbon casing. AP only produced six of these in the black & yellow colourway — if I’m not mistaken.”