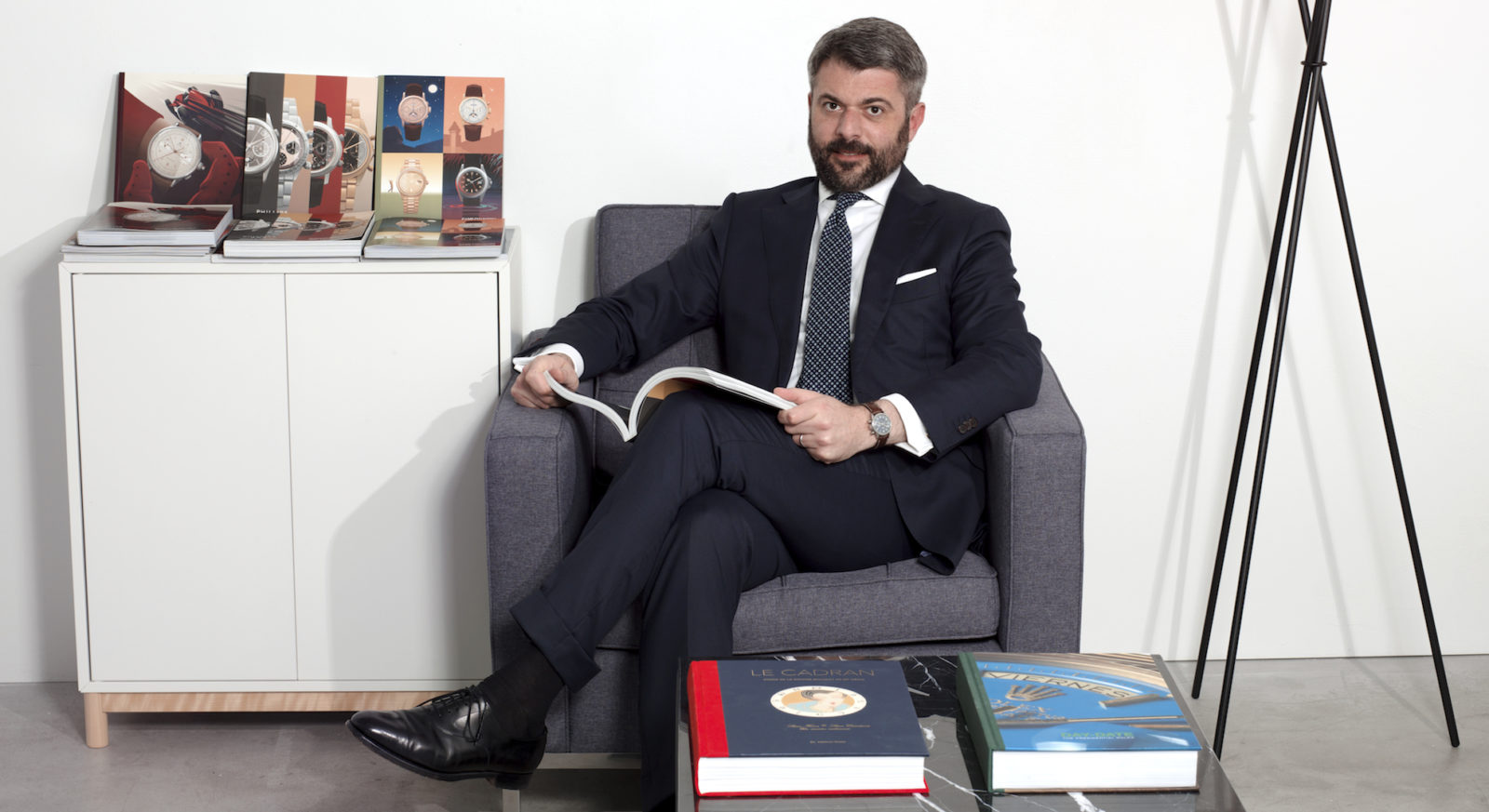 In Wrist Watch — a column dedicated to ‘watch spotting’ in the wild — our resident horology writer Randy Lai chats to key individuals whose collections exhibit some aspect of excellence (e.g. craft, rarity, historicity). In the buildup to Refresh:Reload — Phillips’ inaugural multi-category online sale, to take place later this month — he speaks to Thomas Perazzi, the esteemed auction house’s Head of Watches and veteran auctioneer.

Very occasionally, I get the impulse to surreptitiously stick my neck into the world of professional watch auctions. In the short amount of time I’ve spent around the various specialists, cataloguers, and so-called ‘white whales’ (every major house has a handful of these on speed dial), ‘Thomas Perazzi’ is a name that’s spoken with alacrity.

The veteran Swiss-Italian auctioneer joined Phillips in 2017 and was immediately set with the difficult task of growing its watch department exponentially in Hong Kong. I’d say he’s done alright. Despite a raft of social and economic challenges (which continue to wrack the region), when all was said and done, Phillips Hong Kong walked away with HK$330 million in watch sales last year. Much of that market-leading performance is down to new strategies that Perazzi is constantly trialling: whether it be a groundbreaking thematic sale held in conjunction with Blackbird; a willingness to rapidly shift the bidding experience online; or chairing the department’s first bona fide ‘white glove’ sale in Asia.

The financial crises wrought by CoViD-19 have impressed upon all of the major players just how vital it is to have a robust infrastructure for digital sales, but Perazzi’s chief focus is of course still the very physical Hong Kong Watch Auction. Held every spring over the past 10 years, it’s generally regarded as the most high profile watch-related sale in Hong Kong (and by extension, all of Asia).

When I last spoke to Perazzi, he was wading through the difficult process of developing the catalogue: supervising the consignment, research and photography of hundreds of pieces which will eventually make their way to the auction floor. Coincidentally, it was an ideal moment to sneak a peek at some of his own timepieces — which you’ll see photographed in the Phillips catalogue style below.

As you’d expect of a man who’s spent the better part of two decades in European auction rooms, Perazzi’s personal taste comes across as a mixture of diversity and refinement. The through-line? Each timepiece is always the best possible version of a given design. That shouldn’t be surprising: on some level, you could argue Perazzi was ‘into watches’ long before he even considered auctioneering as a career. “In reality, my love affair with watches started when I was eight years old,” Perazzi said. “I always tell people I was a ‘casualty of Swatch marketing’ [laughs]. In the 90s, the brand was intensely popular, and for my birthdays and Christmases, I was always super excited to get my hands on the latest Swatch timepieces.”

What is surprising, however, is just how sentimental Perazzi can be about the notion of collecting: of five pieces I was shown, three were tied to deeply emotional memories in his private life. All were crafted by independent companies — many of them still family-owned businesses, who value relationships as much as they do bottom lines, today. I jokingly intimated that this couldn’t have been a coincidence. “Of course I pay attention to the brand, historic value, model and overall quality,” he shrugged good-naturedly. “But [and this is the important part] I always buy what I like.” Wisdom and affection — now there’s a winning combination.

“This watch was offered to me by my grandfather, who was a member of the Swiss Olympic bobsledding team. He wore it on the day he won bronze at the 1952 Winter Olympics (in Oslo). Despite being almost 70 years old now, it’s still in reasonably good condition. It was manufactured around 1950–1951 and is a reliable, robust, steel chronograph featuring ‘oversized’ pushers. Chronographs with oversized pushers produced during the 1950s are something of a rarity, which makes this example even more appealing. To date, this is the only vintage Tissot timepiece that I both own and still wear on occasion.”

“The Sea-Dweller is among the most eminent dive watches in history, and for me personally one of the most appreciation-worthy Rolex timepieces. My parents purchased this example as a gift for my 20th birthday, and at the time (2000) it was a brand new release. Rolex originally launched the Sea-Dweller in 1967, with the model’s biggest technical innovation being a helium escape valve. During the 60s, most watches were not equipped to submerge to great depths without breaking: the helium escape valve allowed helium gas, which builds up as divers descend, to be released during decompression.”

“This piece was another very meaningful gift, this time from my wife on our wedding day. It’s unique because, unlike the regular production DB25s, it doesn’t feature a red indicator for the power reserve. My wife had specifically asked De Bethune to change the colour of the power reserve indicator to blue — to match the signature blue Roman numerals. Established in 2002, the independent Swiss manufacture De Bethune quickly developed a reputation for excellence in the world of independent watchmaking. The brand only makes several dozen watches per year, combining time-honoured skills and cutting-edge technology. The DB25 is a perfect encapsulation of De Bethune’s philosophy: it isn’t beholden to the past, and has a sense of forward inertia; mixing together new ideas, traditional aesthetic craft, and extremely technical movement making.”

“I purchased this particular Patek Philippe World Time (circa 2018) to celebrate the birth of my son. In the case of the ref. 5230, the manufacture imbibed classic designs from its earlier models to relaunch the iconic Patek Philippe world timer. The white gold case is gorgeous and very thoughtfully designed; in addition to the breathtaking, hand-made guilloché dial. Beautiful and extremely useful, the world timer complication was a significant breakthrough when it was first introduced in the early 19th century.”

“This is a re-edition launched by Audemars Piguet in 2018 to celebrate the Royal Oak Offshore’s 25th anniversary. It was made in limited numbers and features a re-designed movement.

Upon its launch in 1972, the original Royal Oak took the watch world by storm — changing the horological landscape by introducing the first bona fide sports watch design. 21 years later, the brand would again radically change the game with the launch of its testosterone-injected Offshore: the equivalent in haute horlogerie to the Bentley Bentayga. Talented in-house designer Emmanuel Gueit was set the seemingly impossible task of preserving the now-iconic Royal Oak design but infuses it with a rawer, powerful quality. It took Gueit and his team four years to bring the concept to fruition, with the final watch presented at Baselworld in 1993. Shortly thereafter, the Offshore was nicknamed ‘The Beast,’ thanks to its 42mm case — a size that was considered astonishing at the time. Arguably, I’d even say that it singlehandedly set the trend for large-sized watches: now something of a norm in today’s industry.”

The Refresh: Reload cross-category sale will run between 20-28 May, 2020. To learn more, visit Phillips online.