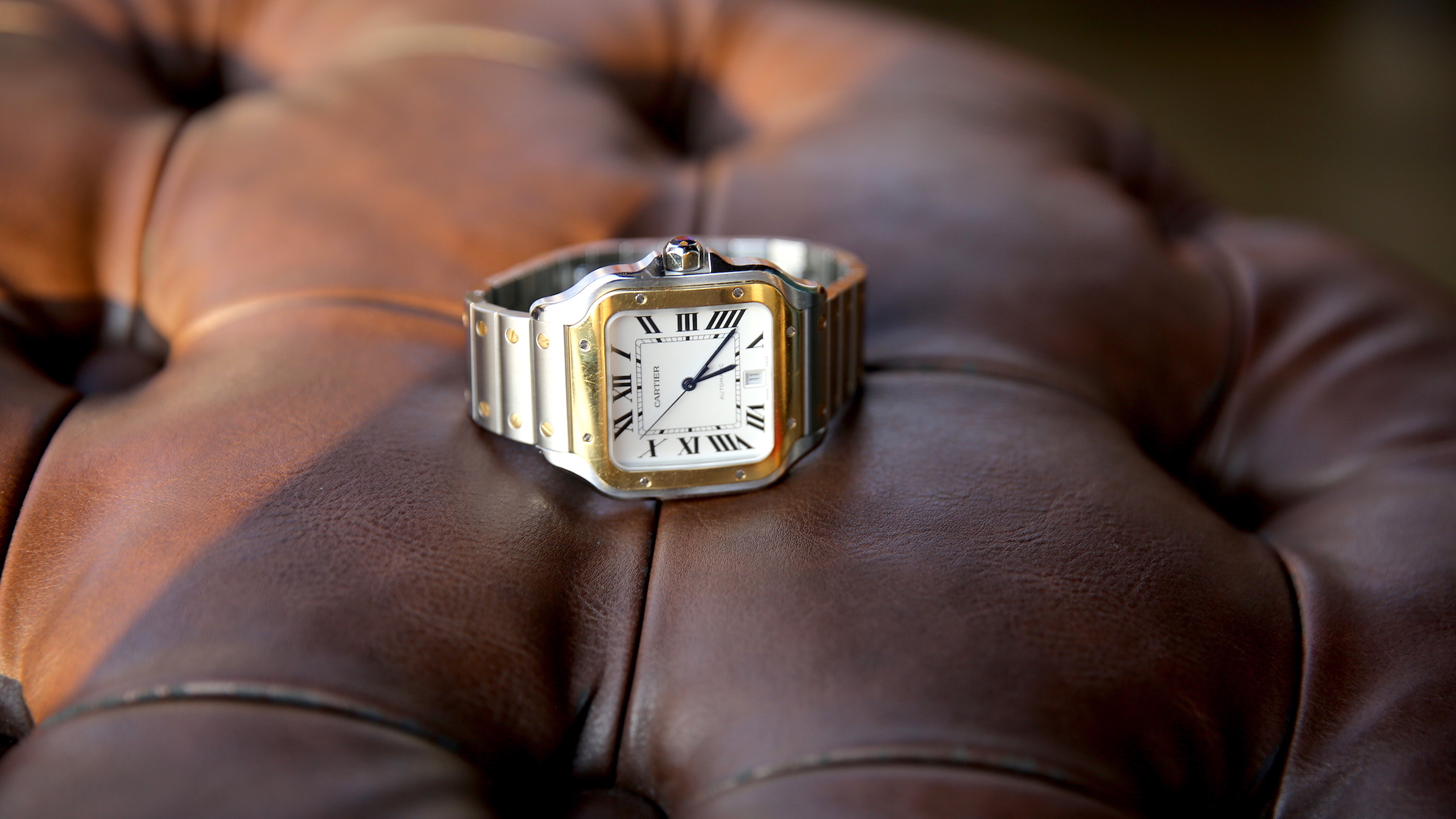 Relaunched last year in stainless steel, two-tone and rose gold, the Cartier Santos continues to be a vital part of the Maison’s modern offering. For this month’s issue of Wristy Business, we spent a few days testing out the 39.8mm model in two-tone steel & yellow gold. Word to the wise: this is a piece that leaves a serious impression on the wrist, thanks to its clarified design, comfortable fit, and suite of wearability-enhancing features. Cartier has managed to inject new life into what ranks among its most iconic shaped watches — and the result is nothing short of spectacular.

As the Santos marketing push has intensified, the general public have become increasingly familiar with the eponymous watch’s origins. The Santos’s beginnings as a turn-of-the-century pilot’s watch, manufactured at the behest of Brazilian aviation pioneer Alberto Santos-Dumont are well-documented (you can read our SIHH 2018 coverage below), so in the interest of brevity I’ll spare you another sermon from the mount.

Style
Cartier gives its iconic Santos collection a reboot for 2018

Suffice to say, over the years, Cartier has made dozens (if not hundreds) of variations on the basic Santos design first set down in 1911. With the notable exception of the bracelet — added in 1978 — the exposed screws, square-ish bezel, and Roman numerals we now think of as classic Santos details haven’t changed in over a century. In that sense, the new models aren’t a massive departure from the vernacular of prior years, though thoughtful new details — some big, others minuscule — encourage wearers to reexamine the Santos in a contemporary context with fresh eyes.

Perhaps the easiest way to articulate my feelings about the new Santos is to mention all of the bits that feel familiar: from a top-down perspective this model possesses the same, square-ish profile of the original; and includes a bezel punctuated by eight evenly distributed screws. On the dial, the execution is about as classic as they come. An enamel-white backdrop lends plenty of contrast to the Maison’s signature elliptical Roman numerals; all of which surround a Deco-inspired railway minute track.

For Cartier purists, the one piece of dial furniture that’s likely to raise an eyebrow is the date window — occupying the 6 o’clock position in lieu of a conventional ‘VI’ index. It’s a small gripe, but unlike the vast majority of tweaks that have been made to the modern Santos, the addition of the date window feels a little arbitrary — diluting the otherwise elegantly straightforward design language in favour of something that can used to up-sell casual wearers. (Purists can breathe a sigh of relief knowing the smaller version of this model, measuring 35.1mm x 41.9mm, features a dial without the date window.)

Thankfully all of Cartier’s other changes prove to be for the better. Yes, the distinctive geometry of the original Santos persists, but several subtle tweaks have also given the modern incarnation noticeably more tension, and therefore visual interest than its predecessor. At a distance, the lugs appear to flow seamlessly into the caseband — this phenomenon is particularly noticeable on the cabochon side of the watch — and the sensation of an integrated, nearly singular object is repeated in the bezel (note how the upper and lower edges ‘fuse’ with the end links of the bracelet).

Cartier actually opted to polish the latter in order to highlight changes to the bezel’s overall design — with the obvious trade-off being that dings and scratches are now significantly more noticeable. Visible wear is one of those topics that all watch collectors find intensely polarising, but personally, the prospect of a well-worn bezel didn’t interfere with my enjoyment even a little bit. Also, to be frank, the case geometry (and the way it interacts with most wrists) will insulate you from the worst in terms of impacts — but more on that later.

There’s a reason that the bracelet is considered to be a huge part of the Santos’s overarching appeal. The former’s punchiness — brushed on top, polished along the edges, punctuated by tiny screws — turned the watch into a Wall Street staple, where it became a frequent site on the wrists of bankers keen to channel Gordon Gecko’s slick, slightly reptilian cool.

30 years later, the bracelet is still a huge part of that equation; and its aesthetic (to put it mildly) is something you kind of have to embrace wholeheartedly if you plan on getting the most out of the Santos — especially in two-tone. Having said that, on the off-chance that you aren’t a fan of the bracelet, the proprietary QuickSwitch and SmartLink systems make it easy, and indeed enticing, to tailor the Santos to your own aesthetic inclinations — not that yours truly ever felt the urge to.

On leather, the Santos achieves a visual effect that’s similar in tone to what you’d expect from watches of the Santos-Dumont/Wright Brothers era. Still, the most interesting detail pertains to the technology that goes into making these straps and their metal counterparts. In essence, QuickSwitch allows wearers to swap their bracelet for a leather strap at the push of a button, whereas SmartLink enables a bracelet to be resized without resorting to special tools like a springbar. This ease-of-customisation has a number of potentially huge ramifications for the general public and, among other things, is likely to encourage ‘sharing’ of the Santos — between spouses, families and close friends.

One thing to be mindful of is that — as a by-product of their wearability-enhancing design — the new Cartier accessories are configured to be worn exclusively with the modern Santos. This necessarily limits your choices to whatever Cartier are able to sell you, but it’s no secret that the Maison carries a robust selection of calfskin and exotic leather. (On Cartier’s Hong Kong website, there are at least 17 different straps available.)

The Cartier Santos (Large) in two-tone on leather.

The Cartier Santos (Large) in two-tone on matching bracelet.

As I mentioned at the jump, the modern Santos can prove challenging to wear, if you’re even a little iffy about the overall aesthetic. Fortunately, over the course of the 72-hour loan period, I quickly grew to appreciate the watch’s comfortable, robust build quality — and that in turn put me in the right frame of mind to appreciate its more extravagant aesthetic flourishes.

The larger size (39.8mm x 47.5mm) is great for illustrating how uproariously fun two-tone can be when executed well, with details like the lustre of the gold bezel or light on the dial playing dramatically across the watch’s various diver-sized surfers. And despite the fact that the large Santos wears like a 42mm piece, I never found myself overly conscious of its size or weight. This is in no small part due to the thickness of the case: at 8.83mm it sits low to the wrist, and thanks to the slightly curvy lugs, stays comfortably in place after a full day of wear.