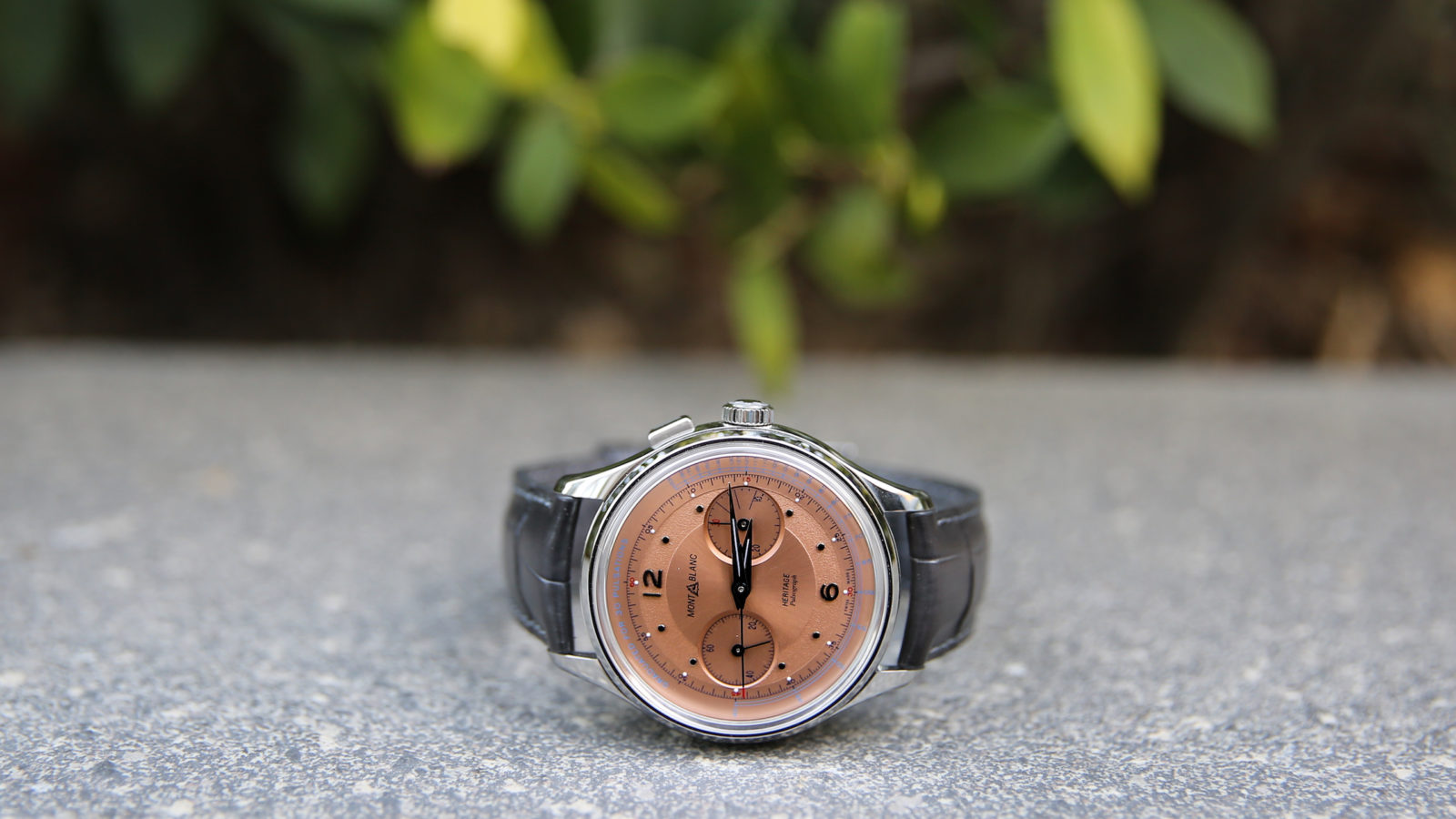 Limited to a run of 100 pieces worldwide, the Montblanc Heritage Pulsograph is everything watch nerds look for (i.e. dial, design, engineering) in a solid vintage remake, and then some. Over the Christmas break, Randy (our Watches Editor) got to spend some hands-on time with this sterling addition to the ‘Heritage’ lineup. Read on for his full review.

In the aftermath of SIHH 2019 (I believe we’re obliged to call it ‘Watches & Wonders’ from now on) I extolled far and wide the horological virtues of Montblanc. The perennially underrated German brand — infamous for making fountain pens — has been on a hot streak in recent years; and in many ways, the Heritage Pulsograph is the latest release to handily encapsulate that success.

From minute one, the Heritage Pulsograph is a watch that touts a certain throwback charm. Its overall appearance is inspired by Minerva chronographs produced in the 40s (Minerva is a historic movement maker headquartered in Villeret, now home to the Montblanc manufacture). This isn’t to say Montblanc has simply done a cut-and-paste job. MD Davide Cerrato — who got his start at Tudor — has gone for small meaningful tweaks rather than reinvention, resulting in a watch that doesn’t prioritise vintage design at the expense of comfort or legibility. When compared to its spiritual predecessor, the Pulsograph’s case and lugs are straighter and flatter, lending the watch an overly contemporary profile on the wrist (at 40mm diameter, it wears exactly as its on-paper dimensions suggest). Meanwhile the dial is protected by a boxed crystal, which has the nice bonus of making the various indications (e.g. pulsations, central hours-and-minutes) extremely legible.

The Pulsograph’s strongest ‘vintage’ credential comes courtesy of its salmon dial. Montblanc’s watch unit really nailed the execution on this front, and considering the heavy hitters they were up against last January — a certain ‘pink gold’ Datograph comes to mind — that’s doubly worth celebrating. The warm luminescent dial is a fantastic source of contrast to the surrounding steel case; cycling through a plethora of coppery pink tones which react dynamically to external light.

Even after averting your gaze from its vibrant salmon hue, you’ll find that the dial of the Pulsograph is one that’s rich in detail. Each of the four segments — the tachymetre, hour ring, sub-registers — is decorated with a different finish which, aside from being satisfying in its own right, helps to parse out all of the key display info. Over the course of my 3-day review, I never had any trouble reading the Pulsograph while putting it through a variety of exercises: a characteristic that sadly isn’t always a guarantee with watches at this pricepoint.

Among those exercises was familiarising one’s self with the blue ‘pulsations’ scale — another gleeful anachronism originally conceived to help doctors measure heart rates. (It’s for this reason that timepieces made with pulsation scales are commonly referred to as ‘doctor’s watches’.) In theory, the scale alleviates the need for physicians to manually count off the number of cardiac pulses per minute. Instead, you simply take a person’s arm, activate the chronograph using the pusher at 2 o’clock and upon reaching 30 ‘pulsations’, read the scale wherever the seconds hand has stopped.

As with much mid-century watch tech, the pulsation scale’s intended purpose has long since been superseded by digital instrumentation. Nevertheless, it can easily be used to measure events of a non-cardiac nature, so long as these consist of 30 instances happening over a fixed period of time. Given the very particular conditions under which the pulsation scale could be employed, it didn’t play a significant role in my overall enjoyment  — though I can see how the execution, feeding as it does into the watch’s neo-retro styling, could appeal to enthusiasts. (For my admittedly pedestrian purposes, I found the payphone style indications at 3, 6, and 9 in the minutes sub-register to be far more useful.)

For the purposes of this review, I’d have been very happy for Montblanc to just slap a solid caseback on the Pulsograph and call it a day. But in a move that’s become increasingly common for the brand in recent years, Cerrato & co took this release as an opportunity to showcase Montblanc’s growing prowess in fine watchmaking and ran with it. Flip the watch on its caseback and you’ll be greeted by the detailed metalwork of the M13.21 — Montblanc’s modernised ode to the Minerva calibre 13.20.

As with the case and dial, the M13.21 is deeply influenced by the rich archive that Montblanc has access to through Minerva. Like the calibre 13.20, this is a manually wound column-wheel movement which keeps the chronograph and timekeeping trains coupled (and this is the important bit) by virtue of a horizontal clutch. Although movement buffs will generally espouse the operational advantages of the vertical clutch — less drag, permanent ‘coupling’ — most will also concede that this comes at the cost of the horizontal clutch’s chief advantage — aesthetics.

As you can see in the images above, the Pulsograph utilises the latter system, providing Montblanc’s watchmakers with additional surfaces over which to pursue an aggressive amount of hand-finishing. The whole movement possesses a level of detail bordering on the organic: snaking bridges and the distinctive ‘Devil’s Tail’ lever completing the sensation of an infinite intermeshed web. This is complemented by the extraordinary attention which Montblanc watchmakers have lavished upon the various constituent parts: there’s an eye-watering amount of anglage on display (I didn’t even need a loupe to make that observation); each countersink is individually mirror polished; and the bridges and plates are clad in maillechort (a silvery alloy prized for its distinctive sheen). On its own merits, there’s ample reason to recommend the Montblanc Heritage Pulsograph. This welcome addition to the eponymous collection punches above its weight class: combining important technology, an evergreen design language, and traditional craftsmanship in a reasonably priced package. (As always, when it comes to watches, describing something that costs six figures as ‘reasonably priced’ is an exercise in relativity.)

Unfortunately, there’s a huge section of the public — I’d go so far as to say the majority — who will immediately write this off because of the Montblanc branding. That’s a shame frankly, because (amongst other things) that reaction affirms the notion that consumers primarily see mechanical watches as a means of broadcasting status. The silver lining? You won’t be vying with the aforesaid lemmings when it comes to getting your hands on one of these — limited to a global run of just 100 pieces.

The Montblanc Heritage Pulsograph (limited to an edition of 100 pieces) is now available for HK$242,500. To learn more, visit Montblanc online.

Living
27 Questions: Arnault Castel, founder of Kapok
Food & Drink
7 art restaurants in Hong Kong for design-savvy dining
Culture
Bored at home? Try these 30 things to kill the time
Living
How to Succeed: Philippe Delhotal, Artistic Director of La Montre Hermès
Style
What’s old is new again: The Audemars Piguet [Re]master01 chronograph
Travel
This is how you can travel the world without boarding a flight
Food & Drink
Handpicked: Summer Lo shakes up a storm with a Yakult-based morning pick-me-up
Beauty & Grooming
Q&A: Celebrity beauty guru Margie Lombard on the proper way to cleanse your face
Travel
10 best travel books that we’re living vicariously through
Sign up for our newsletters to have the latest stories delivered straight to your inbox every week.