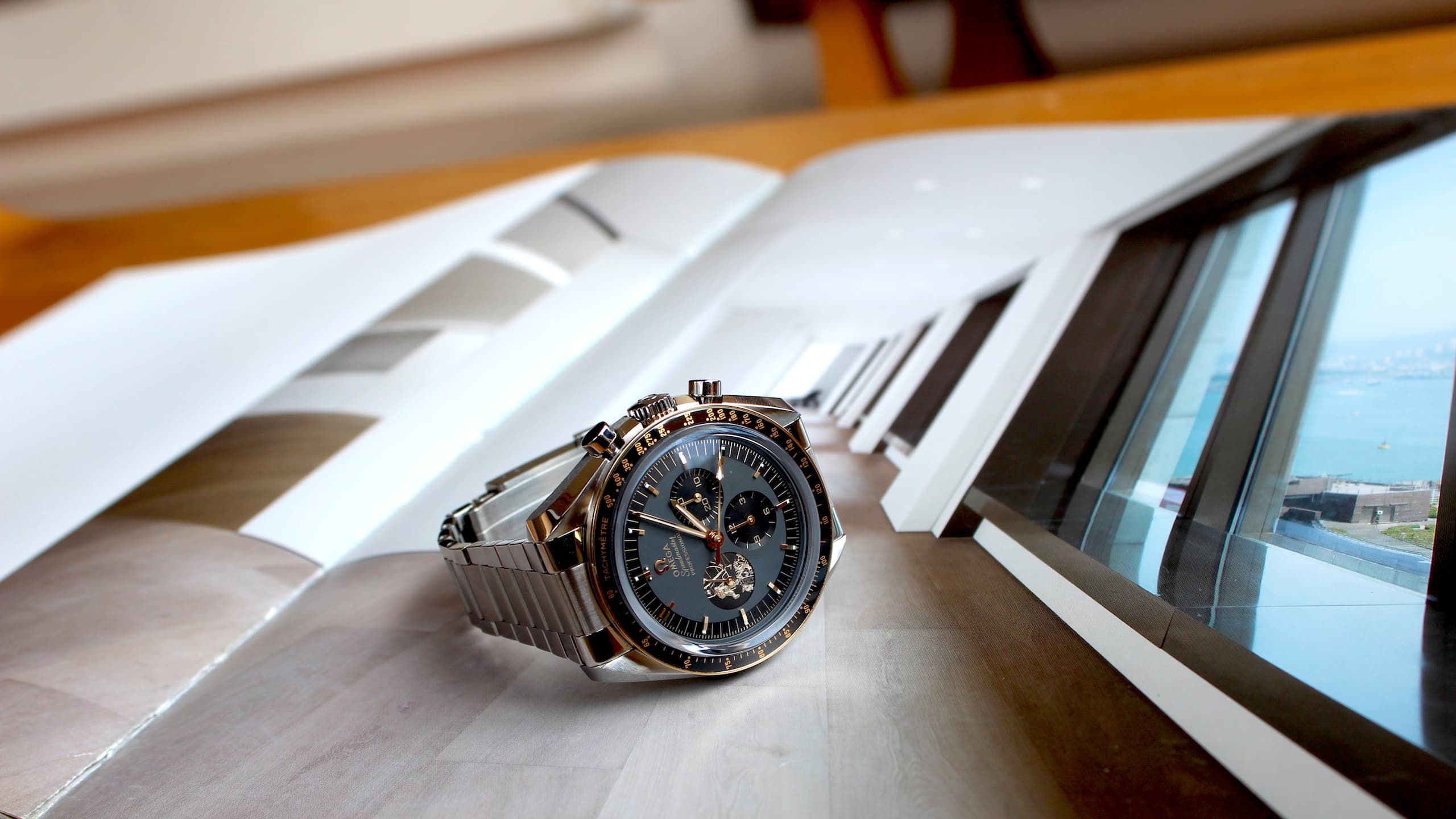 Recreating many of the characteristics of its spaceflight-qualified ancestor, the new Speedmaster ‘Apollo XI’ is a smart and whimsical way to celebrate the 50th anniversary of the moon landing. In combination with good form factor and a cutting-edge movement, it’s also more than a little evocative of the original’s spirit — a watch which you can wear on solid ground, to the moon and everywhere in-between.

On the off-chance that you hadn’t noticed, OMEGA has been having a helluva year. The industry-leading watchmaker is celebrating the 50th anniversary of Apollo XI: the manned spaceflight mission that put NASA astronauts (along with their Speedmasters) onto terra luna in 1969. Without banging the drum, that mission is widely considered to mark American victory in the Space Race, and in so doing contributed directly to the Speedmaster’s reputation as the only watch to wear on the moon. (For those looking for more exhaustive background on the Speedy, give the article below a read.)

Consequently, the watch community always knew 2019 would be the year for a commemorative limited edition Moonwatch, which is precisely what we got with the ‘Apollo XI’ 50th Anniversary Moonshine: a solid gold special edition modelled after the historic reference BA145.0220. The surprise came when, less than two months later, OMEGA doubled down with the launch of another special edition — this time in stainless steel.

At approximately a third of the Moonshine’s price, the new Apollo XI limited edition is bound to resonate with Moonwatch purists. This new model takes some liberties with the technical pedigree of its predecessor, but there’s plenty to enjoy here if you’re even a little interested in the aesthetic or cultural particulars of the original. Beyond that? This is just a really solid chrono: imbued with good looks, great value, and just a hint of decadence. Let’s take a closer look.

A design that’s all about posterity

Unsurprisingly, the new Speedmaster Apollo XI borrows heavily from the iconic design language of the Reference 105.012. First flight-qualified in 1964, the latter’s distinctive features include recessed 3mm pushers; a spear-tipped chronograph hand; three registers (3-6-9); and ‘twisted’ lugs (so-called because of their lyre-like profile). You could argue that the decision to recreate these details isn’t a very original one — said features are all present in the current generation Speedmaster Professional — but their purpose is to ground this limited edition’s more eye-catching details in a setting that feels reassuringly familiar. Turning my wrist over, I never got the sense that this was a fundamentally different watch from its predecessor — it simply felt like a Moonwatch with a little extra oomph. And I mean that in the best possible way.

The profile of this new Speedy may feel familiar, but small details really push it into ‘special edition’ territory. The various Moonshine gold components play particularly well off the slate grey dial; and their light blond hue prevents there from being too much lustre when viewed from afar. In contrast to details like the ‘dot over 90’ bezel, the seconds register and 11 o’clock index illustrate very prominent references to the Apollo XI mission. Now, OMEGA purists would be well within their rights to call these design choices ‘pandering’, but in the grand scheme of things, I think that the number ’11’ and a relief of Buzz Aldrin’s posterior make perfect sense. In the vein of the solid gold Speedy, this is a commemorative watch: intended to crystallise a particular moment in history, and celebrate OMEGA’s contribution to it.

As is the case for Aldrin’s backside, when you flip this watch over the lengths that OMEGA have gone to (in order to maintain historical accuracy) are readily apparent. The caseback is decorated with an image of Buzz Armstrong’s footprint — based on actual footage the Apollo XI astronauts took of the lunar surface. If you look closely, you’ll see tiny crosshairs that are part of what’s known as a reseau grid — used to correct misalignment or distortions in film cameras. That OMEGA’s designers would spend so much time recreating the exact position of each crosshair speaks volumes about their passion for nailing the small things; and tracks with the overarching theme of a commemorative edition. Needless to say, it was a neat detail that I enjoyed spending time with whenever I took this Speedy off.

Let’s talk optics: at 42mm, the Speedmaster Apollo XI slots neatly into the middle-of-the-road classification of modern chronographs. Although definitely not cumbersome, it possesses a certain undeniable wrist presence, courtesy of the hefty 14mm-thick case. Strictly speaking 42mm x 14mm puts this outside the size range which would usually be appropriate for formal wear (e.g. at the office), though whether you subscribe to that view depends largely on how committed you are to the traditional demarcation between sports and dress watches.

Given my own preferences, 42mm is bigger than average, though as you can see in the photos the main drawbacks of OMEGA playing in this ballpark are purely stylistic. (Let’s just say that suit sleeves and multifaceted cases don’t make the best couple.) For the kind of a guy who fervently separates his casual and ‘9 to 5’ wardrobe, it might be worthwhile complementing this limited edition with one of OMEGA’s thinner dress styles. Nevertheless, considering the technical imperatives that inform this case size — chief among them being adequate space to house the METAS certified calibre 3861 — 42mm is as big as this Speedy needs to be.

Comfort is another area in which this watch excels. The ‘twisted’ lugs ensure the case sits unobtrusively atop the wrist, while the bracelet’s flat link construction offers a degree of stretch during wear. (For Speedy buffs, this is another historical tidbit, a callback to the 1506 bracelet used for the original Moonwatch.) The old-school OMEGA logo and alternating polished/brushed finishing make this bracelet a real feast for the senses.

Conversely, that historical accuracy also yielded my only gripe in this entire review: because the links are innately stretchy, and the 1506 was never designed with a Oysterlock-style expansion system, you have to be really precise when sizing this bracelet. Because I was half an inch off my ideal measurements, the stretch links actually caused the whole case to ‘pull’ sideways, meaning that I’d periodically have to stop and recenter the watch on my wrist throughout the day. That isn’t a design flaw per se, but it’s a practical part of the user experience which is worth noting — especially if your knowledge of bracelets has been mostly informed by the designs of Rolex or the Richemont brands.

All images above were taken at the Upper House Hong Kong.