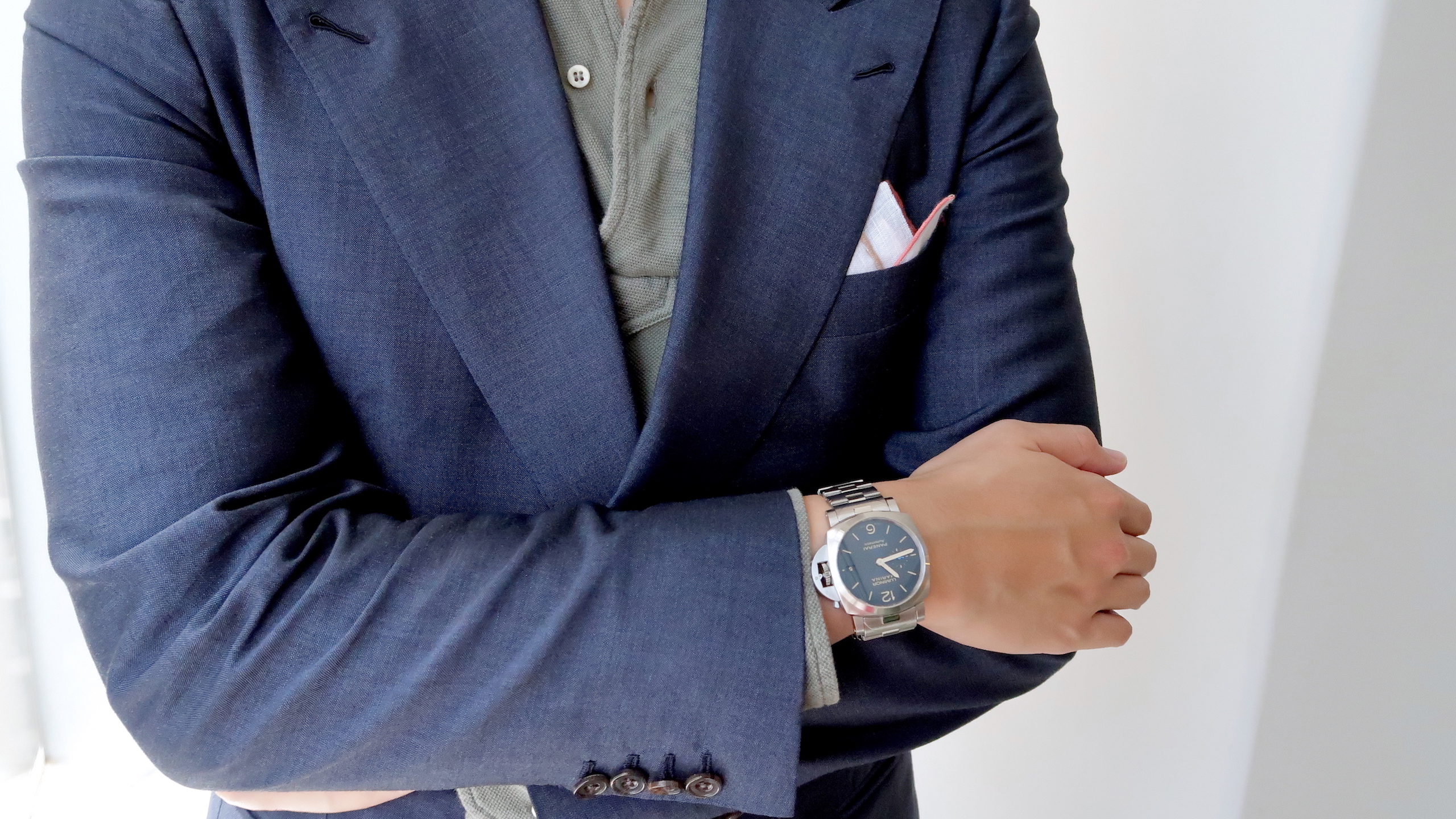 Hi-res images and press previews are one thing, but to truly understand what makes a great watch tick, you need to grasp it in the metal. That’s the impetus behind ‘Wristy Business’: a new column in which resident watch hobbyist Randy Lai reviews the latest releases from our favourite brands. From time-only pieces to calendar chronographs, we take watches out of their hermetically sealed environment and into the wild — all whilst contemplating what makes them right for your wrist.

Since its acquisition by Richemont in 1997 (then known as Vendôme Luxury Group), Panerai has gradually been shifting away from its singular reputation as a manufacturer of military-grade tool watches by developing new products aimed at a more diverse audience. Under new CEO Jean-Marc Pontroué, that diversification of choice appears to be intensifying. Case in point: just months after the PAM977 and PAM978 Luminor Marinas were announced, we’re getting a new release in the form of the PAM1028.

The newest Luminor is a close relation of the silvery PAM977 and PAM978: all three share the same 72-hour movement; bracelet; and overarching design language. The more interesting characteristic shared between these is thematic. Like the Luminors released earlier this May, Panerai’s latest is clearly aimed at the ‘office diver’ crowd, many of whom will be instantly smitten by its robust movement and undeniable wrist presence. Make no mistake: short of downsizing to the 38mm format, this is the most office-friendly Luminor that we’ve seen all year. The overall aesthetic remains consistent with what Paneristi expect from the collection; now streamlined for an audience whose conception of diving revolves primarily around the clubhouse pool.

The element of the new Luminor that I was most readily drawn to is the dial. It’s decorating using a ‘sunburst’ finish that helps to capture and diffuse light in a multitude of visually appealing ways. This vertical brushing is identical to the kind used on the PAM977, albeit with one important difference — colour. Unlike its predecessor, this dial emphasises both light and tonality. As it’s illuminated throughout the day, you’ll witness a procession of different colours and reflections which are influenced by your surroundings. Under direct halogenic light, the dial appears matte and grainy (almost like brushed denim); whereas angled sunbeams can narrow exposure down to each individual index. Visual interest is the primary criteria for a good sunburst dial; and on that front, I think Panerai have done a pretty good job. You’ll be tempted to read the time under a variety of different environmental conditions, and the experience of looking down at your wrist can go from pragmatic to pure joy in a matter of seconds.

I should also point out that the PAM1028’s dial offers a few details that are likely to give it the edge with water babies, as it foregoes the distinctive tone-on-tone look of the PAM977 in favour of Panerai’s signature ‘sandwich’ construction. This consists of the blue dial segment (which appears nearly black under low lighting) being layered over a separate piece containing the indices, with the latter being coated in beige Super Luminova. Due to the extremely high contrast that this kind of dial execution produces, it’s not difficult to see why it would be more appropriate for underwater wear. That said, the overall effect renders the watch only marginally more legible, with the primary attraction being the extremely versatile blue-on-beige colour way. (You can see how I’ve opted to match the dial with some tailoring staples, using it as a colour reference, below.)

If it ain’t broke…

If you’ve ever worn any of the models in the Luminor family before, chances are that what I’m about to describe will sound familiar. At 42mm x 13.2mm this is definitely not a small watch. Many of the case components were engineered to convey an ‘oversized’ quality that’s core to Panerai’s identity. The signature ‘cushion’ case of the Luminor — which resembles a pillow, bulging at the seams — adds undeniable heft to the wrist. This sense of perceptible weightiness is exaggerated by the lugs: though angled in a way which is meant to help the whole watch sit flatter, they’re also relatively short (especially when contrasted with the size of the cushion case). This creates a slight gap between the lugs and the wrist, which gives the appearance of additional height whenever the watch is worn.

These observations make the PAM1028 sound like an incredibly cumbersome watch to wear. In reality, the impact of the case and bracelet on your whole appearance is most likely to be minimal. Unless you’re a purist who can’t abide the thought of a ‘dress watch’ protruding from your jacket sleeve, the new Luminor is a happy compromise between a full-blown dive watch and a daily wearer. All concerns about proportion and how high the watch sits on your wrist are doubly easy to forgive when it’s worn casually: the same characteristics which I found annoying in a formal context are what make it a great choice with shorts and a tee. Granted, to really get behind the new Luminor you have to appreciate the solidity and horological machismo which are par for the course in any Panerai, but stylistic considerations aside this is a well-made, handsome looking ‘office diver’ that’s bound to prompt a few wrist checks.