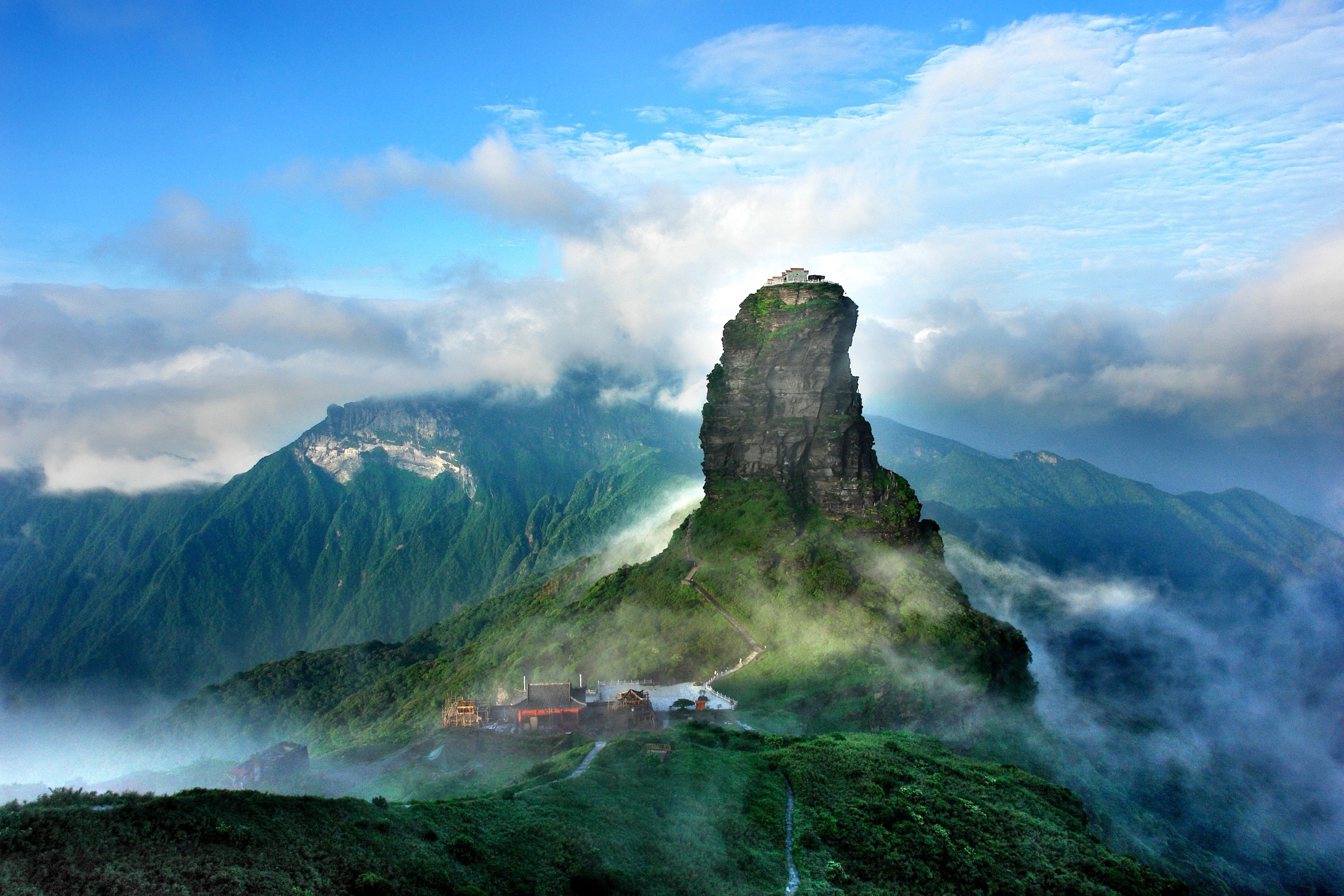 Every year, the UNESCO World Heritage Committee adds a new collection of amazing locations to its list of World Heritage Sites; this month, a total of 19 sites have been given the prestigious designation and added to the list. A total of 1,092 such areas have been demarcated by UNESCO since 1975: on the basis of “outstanding universal value” and significance to the collective interests of humanity. To qualify as a World Heritage Site, nominees must satisfy at least one of ten criteria (i.e. six “cultural” and four “natural”) promulgated in UNESCO guidelines and international law.

This year’s successful nominees included 13 cultural, 3 natural and 3 mixed (i.e., both natural and cultural) sites deemed to be of sufficient importance. So without further ado, these are the 19 World Heritage Sites that savvy travellers ought to be adding to their bucket list in 2018.

As its moniker suggests, for millenia this area in Western Greenland has been home to both Paleo-Inuit and Inuit cultures who’ve used the region as a hunting ground for various land and sea animals. According to UNESCO, the Aasivissuit — Nipisat hunting ground is a testament to “the resilience of human cultures of the region and their traditions of seasonal migration”.

Located in the eastern Arabian peninsula, the Al-Ahsa Oasis — with its sprawling canals, drainage and archaeologic sites — evidences continual human settlement in the Gulf region from Neolithic times to the present. Home to some 2.5 million date palms, it is classified as the largest oasis in the world: an exceptional example of humankind’s ability to interact harmoniously with the natural environment.

This newly inscribed site on the Omani east coast contains archaeological remains of the ancient city of Qalhat — a major port between the 11th and 15th centuries CE. Famous for its diverse and complicated necropolises — such as the Bibi Maryam Mausoleum (pictured above) — the ancient city of Qalhat offers unique insight into historical trade links between Arabia, East Africa, India and China.

Archaeological border complex of Hedeby and the Danevirke

This border complex consists of two discrete archaeological sites: the remains of a trading emporium at Hedeby; and a line of fortifications at Danevirke (the latter separating the Jutland Peninsula from the rest of mainland Europe). Given its well-preserved state, the twinned areas of Hedeby and Danevirke have become a key site for researching socioeconomic development during the Viking Age.

Once the seat of the Caliphate of Cordoba (a Western Islamic civilisation which presided over the Iberian Peninsula 1,000 years ago), Medina Azahara was believed to have been razed sometime in the 10th century CE. The city was unearthed in the early 20th century with much of its original infrastructure intact. Since then, roads, bridges, water systems and a host of decorative elements have provided archaeologists with intimate knowledge of this European Caliphate at the height of its power.

Situated in what is now considered the Turkish region of southeastern Anatolia, this site contains an array of megalithic structures that historians believe were associated with funerary rituals during the Neolithic Age. Amongst the recurrent structures are pillars decorated with carved animal motifs: a window into the nomadic way of life pursued by Mesopotamian hunter-gatherers 11,500 years ago.

A unique testament to the Kakure Kirishitan community that existed for over three centuries in Japan, these hidden sites are composed of a series of ten villages, a cathedral and Hara Castle. Taken as a whole, they are reflective of early interactions between native Japanese with Christian missionaries. Located in the northwestern portion of Kyushu Island, it’s nothing short of revelatory that these structures were not destroyed by the (predominantly Buddhist) Shogunate during the Edo period.

The Piedmontese comune of Ivrea began life as a testing ground for Olivetti — a manufacturer of office equipment like typewriters and mechanical calculators. Replete with residential and industrial planning ideas which reflected the mid-century philosophy of the Movimento Comunità, Ivrea — oft referred to as the “industrial city of the 20th century” —  is renowned for being a model social project. According to the UNESCO World Heritage Committee, it espouses “a modern vision of the relationship between industrial production and architecture”.

Construction began on Naumburg Cathedral in 1028. Well known for showcasing architectural elements that evidence the transition from the Romanesque to early Gothic period, the Cathedral is made up of a central superstructure flanked by two Gothic choirs. The World Heritage Committee has observed that the westerly choir, in particular, reflects changes in the representation of “science and nature in the figurative arts”.

These monasteries, all located throughout mountainous locales on the Korean Peninsula, demonstrate characteristics unique to the practice of Buddhism throughout the region. The madang (“open courtyard”) and four specialised structures (i.e. pavilion, lecture theatre, dormitory and Buddha hall) are hallmarks of the traditional monastic layout between the 7th and 9th centuries; and reflect various daily activities associated with Buddhism up to the present day.

This landscape is composed of eight distinct archaeological sites situated throughout the southeastern part of the Iranian province of Fars. Assembled structures (including palaces and military fortifications) can be dated to a time period stretching between 224 to 658 CE; consequently, a rich variety of cultural traditions are represented including those of the Romans, Achaemenids and Parthians.

Thimlich Ohinga, located in western Lake Victoria (Kenya), is a testament to pastoral communities that inhabited the region up until the mid 20th-century. Consisting of massive dry-stone walled enclosures, the site served as a fort for livestock and settlers; and has been deemed by historians to have been important in developing social relationships between the communities of the Lake Victoria Basin.

After becoming an international trading centre during the British Raj, the city of Mumbai implemented various ambitious urban planning projects that resulted in construction of: Victorian Neo-Gothic buildings; and later, a variety of Art-Deco edifices such as cinemas (Indo-Deco, if you will). Situated around the Oval Maidan, structures in both styles are a testament to the various phases of modernisation that Mumbai has undergone over the last 100+ years.

Comprising 40 percent of the Barberton Greenstone belt, this newly minted natural site in northeastern South Africa is one of the world’s oldest geological structures. Notably, the Barberton Makhonjwa mountains feature breccia that were the result of massive meteorite impacts which occurred some 3.8 billion years ago — when the first continental land masses were starting to form on Earth.

Sitting smack-dab in the middle of France, this natural heritage site includes the Limagne fault, Chaîne des Puys volcanoes and an inverted relief of the Montagne de la Serre. Examined together, the geological characteristics of these three areas are the clearest modern illustration of a phenomena known as continental rifting: one of five major stages of tectonic shifting.

Located in the southwestern part of Guizhou province (China), Fanjingshan is a mountain range that varies between 500 metres and 2,750 metres in altitude. This site’s natural isolation has resulted in the development of diverse native species, notably including the Guizhou snub-nosed monkey, Fanjingshan fir and (highly endangered) Chinese giant salamander. This mountain range is also home to the largest primeval beech forest in subtropical China.

Often referred to as “The Maloca of the Jaguar”, Chiribiquete National Park is the largest protected area in Colombia. 60 rock shelters dot the base of various tepuis (table-top mountains) spread throughout the site; each decorated with intricate paintings linked to historical worship of the jaguar — a symbol of power and masculinity. Over 75,000 paintings have been discovered so far: depicting hunting, battles and a variety of ceremonies performed by local indigenous communities for over 20,000 years.

Although the World Heritage Committee had previously approved various Canadian sites for UNESCO listing, Pimachiowin Aki is the country’s first “mixed” nomination: satisfying a combo of both natural and cultural criteria. The area is well known as the ancestral hearth of the Anishinaabeg people — indigenous fishers and hunters divided into four distinctive communities — and its importance is immediately discernible from the sophisticated network of ceremonial sites and living habitats linked via waterway.

This site, located in southeastern Mexico, is one of the most biodiverse zones in North America. Home to the densest forests of columnar cacti in the world, the Tehuacán-Cuicatlán Valley is a uniquely rich landscape also containing agaves, yuccas and oaks. An exceptional water management system throughout the valley partially accounts for the longevity of various endangered species of cacti.

(Source: all photos courtesy of UNESCO)