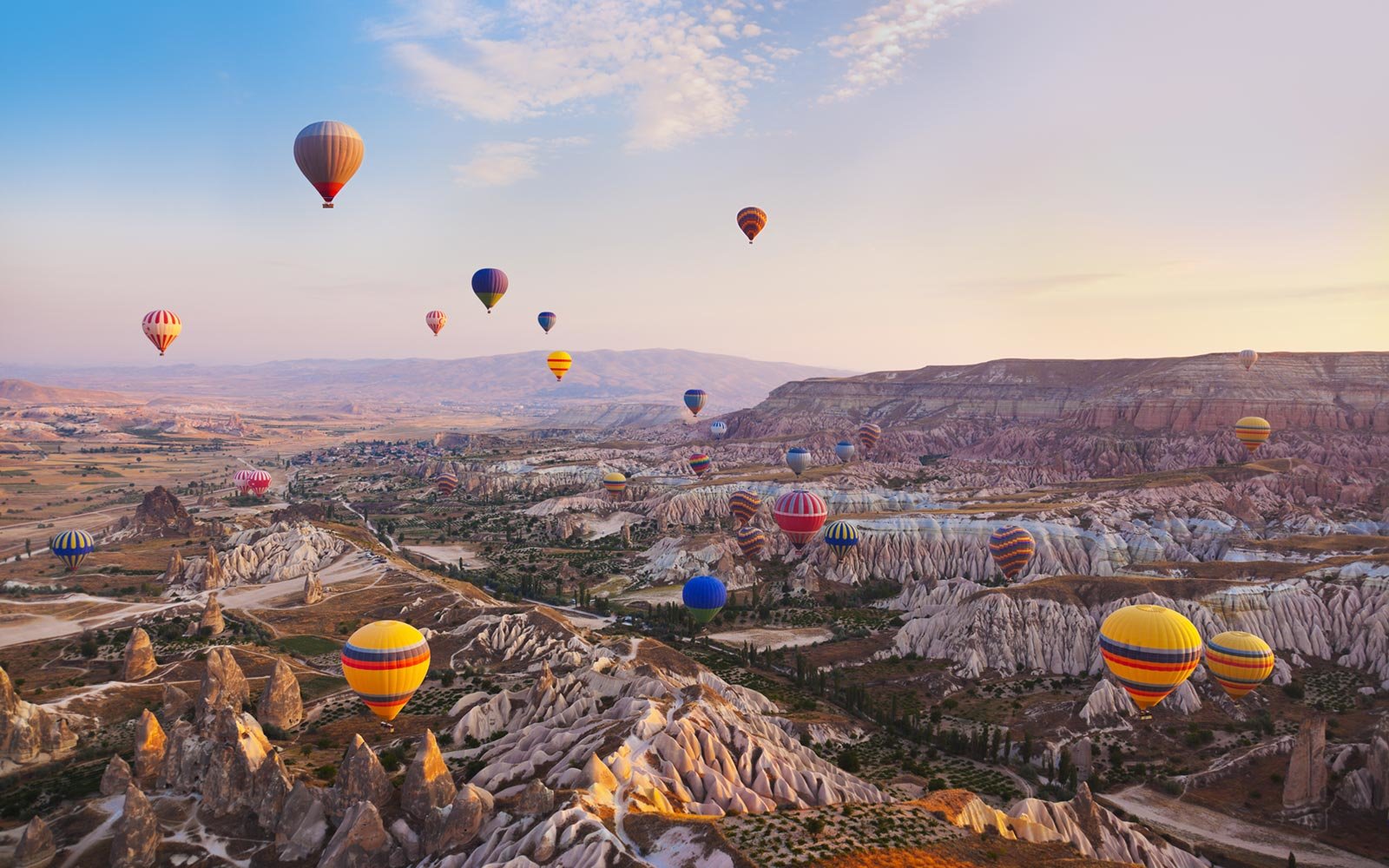 It’s easy to forget you’re on earth in Cappadocia. The geological oddity that’s located in central Turkey is home to a multitude of terrains, one that ranges from stark Anatolian plains and clusters of “fairy chimneys” to honeycombed hills and imposing boulders.

Today, the surreal landscape of eroded volcanic ash remains to be so much more than a mere Instagrammer’s paradise. Nature might have shaped Cappadocia’s peculiar lunarscape millenniums ago but it was ancient civilisations that carved out the intricate network of subterranean architecture beneath. These man-made caves are now just as sought-after an experience as the whimsical formations above.

Not all of its troglodyte dwellings are hotels and homes though; with a history that dates back to the Persian empire, expect to take in cultures from a variety of religions and lands. This means plenty of museums and churches that reveal glimpses of life before modern times.

If a trip to the cosmopolitan Istanbul is already in order, this guide should convince you on why you should carve out some time for Cappadocia too.

A vast departure from the Jetson-esque skyscrapers you’re used to today, Cappadocia’s accommodation options largely consist of cave hotels, which means that even turning in for the night should be an experience in itself.

Out of the many, Kayakapi Premium Caves stands out for location alone. Nestled within over 2,700 acres of a historical neighbourhood that dates back to the ninth century, the rocky hillside reveals 32 guest rooms built within the maze of caves, some even accommodating private cave pools and hammams. The experience is kept authentically Turkish with not only plenty of traditional touches within, but also a view of the city of Ürgüp and Göreme National Park outside, which has been on the UNESCO World Heritage List since 1985.

Those seeking more contemporary options would appreciate Ariana Sustainable Luxury Lodge. Named after an ancient sun goddess, the luxury eco-boutique is a light-filled space that overlooks this ancient ‘cradle of civilisation’, and is within proximity to historical wonders like the Uchisar Citadel and Göreme Open Air Museum.

Here, the rustic property boasts old mosaics and vaulted ceilings that are met with striking artworks and designer furniture. Its sun terraces not only make for a great spot to indulge in a cocktail, but also a sunrise yoga session or an alfresco massage to kick the pace down a few notches.

As Turkey’s sole member of the prestigious Relais & Chateaux Association, the Museum Hotel sits pretty on the slopes under Uchisar Castle, the highest geographical point in Cappadocia. Heritage is at the forefront here, and the restored caves — once home of the Hittites, Persians, and early Christian Romans — are now filled with priceless rare artifacts, each registered with the Nevşehir Museum.

Thanks to its unique vantage point, you’ll be rewarded with an unrivalled panoramic view of the ethereal rock formations below, as well as viewings of both golden hours daily. The architectural wonder is just as opulent within — L’Occitane toiletries, a pillow menu, and even your personal wine tap are available in the suites.

Few are as well versed in the art of modern Turkish cuisine than Ziggy Cafe. Named after their beloved Airedale Terrier, the eclectic couple behind this evocative establishment in Ürgüp have nailed the perfect formula for an unforgettable meal or after-dinner drink in the city.

It is here that you’ll enjoy both creative takes on Turkish mezes and an exotic legion of cocktails within the candle-lit confines of a beautifully restored stone house. Four terraces in ascending levels offer soft breezes and photogenic views that span for miles – little wonder it’s developed a fiercely loyal following since it opened in 2007.

Enclosed in blooming ivy is the entrance of Dibek, one of Cappadocia’s highest rated restaurants for a multitude of reasons. Located in the heart of Göreme, the 475-year-old building sweeps its patrons back to the past with a remarkably traditional atmosphere.

Here, guests sit around low wooden tables and plush cushions to enjoy a hearty — and comprehensive — array of Turkish fare and homemade wine. Dibek isn’t short of culinary highlights, but its manti (Turkish ravioli) and testi kebab (a slow-cooked kebab cooked in pottery) scores high on both authenticity and flavour.

Muti is another gem hidden away from plain sight, this time behind fruit and nut shops on Ürgüp’s central plaza. Like Dibek, the establishment is situated within a charming centuries-old caravanserai, where you’ll have the option of dining at a patio flanked by a cave wall that rises up to Temenni Hill.
The elaborate menu by famous Istanbul restaurateur Muhittin Ülkü is equally diverse; you’ll encounter a seasonal selection of Ottoman and Aegean cuisines, although Istanbul’s cosmopolitan influence occasionally finds its way in too. Unusual mezes such as the börek — a pastry filled with pear, cheese, and walnut — and as well its rice pudding with plum sauceare must-tries.

Cappadocia might already be an Instagram wonderland by foot, but up high is where you’ll truly get trigger-happy.

Hot air balloons are by far the best way to take in its surreal landscape, where for 60-90 minutes you’ll float above the Gaudí-esque landscape, watching the sun slowly illuminate the volcanic spires and hills. There are plenty of vendors offering these excursions, all of which cost a pretty penny but is well worth the cost (and waking up at 5am for).

Once you’re back on land, head for the Göreme Open-Air Museum. The UNESCO World Heritage Site is one of the best preserved cluster of cave churches in the region, with a history that dates back to the second century in the early spread of Christianity.

Today, the collection of monasteries each still house their own unique church, with walls richly decorated by Byzantine-era paintings of biblical scenes; the Karanlik Kilise (the Dark Church) houses some of the most vibrantly painted frescos.

Those invested in the craft of Turkish pottery will also enjoy a stroll through Avanos, where ateliers of craftsmen still make their wares the same way as their forefathers did centuries ago. Set on the banks of the Kızılırmak (Red River), the old city showcases the diversity and tradition of the lost art, especially since master potters still use foot driven spinning wheels to create their art.

Travel Travel Guide Turkey Cappadocia
Shatricia Nair
Senior Writer
Shatricia Nair is a motoring, watches, and wellness writer who is perpetually knee-deep in the world of V8s, tourbillons, and the latest fitness trends. She is fuelled by peanut butter and three cups of coffee a day.
Motoring Wellness Watches