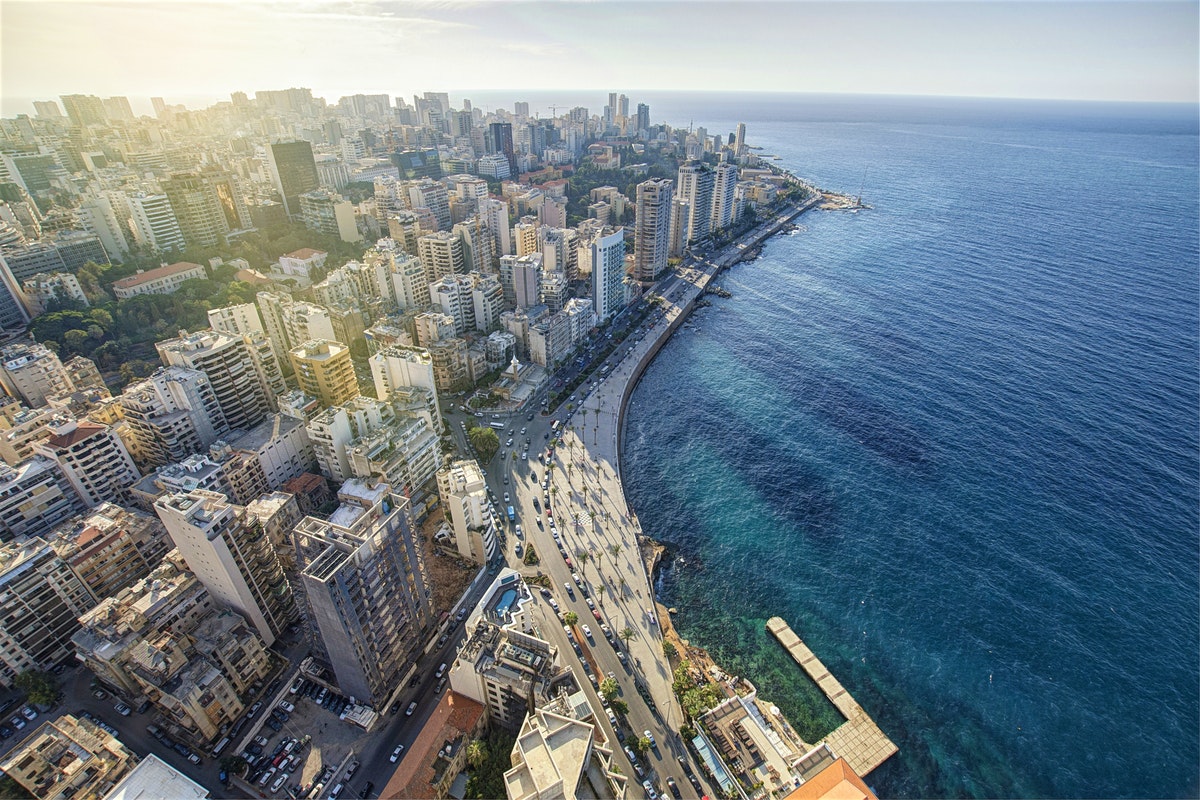 Lebanon’s capital city, Beirut, is one with many facades. Situated on a peninsula adjacent to the Mediterranean Sea on one side, and the Lebanon Mountains on the other, the city not only enjoys a hot summer Mediterranean climate most months of the year, but also spectacular views of both the serene coastline and rugged terrain.

As one of the oldest cities in the world, the land is dotted with ancient structures such as the 1,600-year-old Temple of Bacchus, but you’ll also find a Zaha Hadid original just an hour away, sharply contrasting the medieval architecture with her trademark serpentine lines.

Its boasts a culture just as unique — having been influenced by Roman, Greek, Arab, Ottoman, and European civilisations over the past 5,000 years it’s been inhabited — so expect a rich amalgamation of history, food, architecture, and culture. Which is also why this ‘Paris of the East’ has been such a draw to those looking for something a little more than the beaten path.

Overlooking Matryr’s Square in the Downtown area — one of the capital’s glitziest districts — is Le Gray, a modern hotel that stands out for its atypical Lebanese decor. Grey-walled corridors are met with nearly 500 abstract paintings, and a stark metal and glass structure sits in the central atrium, lending a contemporary slickness to its interiors.

Here, the 103 rooms and suites are generously-sized and stocked with toiletries from cult brand REN. Its restaurant, Indigo on the Roof, not only serves up a thoughtful menu that includes poke, but also offers a surreal view of the Mohammad al-Amin mosque’s bright blue dome and the spire of its neighbouring Saint Georges Maronite Cathedral. For a decent cocktail, head up to the Cherry on the Rooftop bar where you’ll also find a 360-degree view of the city.

On the other end of the spectrum is Phoenicia, a hotel that boasts marble pillars, chandeliers, and fountains throughout its property. The rooms’ contemporary designs are met Ottoman-era opulence, with touches that harken back to Beirut’s reputation as a glamourous country pre-war. It doesn’t hurt that many of them overlook its adjacent marina too.

Authentic cuisine is at the forefront here, with the Mosaic and Eau De Vie restaurants offering stellar menus of Lebanese staples.

For a more intimate experience, check into the Baffa House instead. The family-owned, four-bedroom guesthouse sits within a conspicuous yellow 1940s building in the lively Mar Mikhael neighbourhood, and is within walking distance to the neighbouring Gemmayzé. The fresh mix of antique furniture and colourful local art are a plus, but the icing on the cake remains to be the traditional homemade breakfast, freshly prepared by the owner’s mom every morning.

You’ll  be inclined to snarf baklava and many a chicken shawarma during your time in Beirut, but the Middle Eastern gem has so much more to offer on the culinary front. The Levantine style of cooking draws heavily on its ancient history for inspiration, so expect influences by the foreign civilisations including the Ottoman Turks and even the French.

A taste of the city’s glamorous heyday can still be had at Em Sherif in the charming Ashrafieh district. Helmed by Mireille Hayek, the lavish Oriental-styled mansion offers decadent dishes with a home-cooked twist, with standouts that include the fattoush with aubergine, and meghlia, a spiced rice pudding.

The Lebanese are big on nightlife, and on its pinnacle sits Iris, an open-air city retreat that checks all the boxes for an unforgettable night out — think sunsets, live bands, swanky cocktails and good food.

Meanwhile, Torino Express sits behind an Ottoman-era vaulted shop-front on the trendy Gemmayzé street, churning out good coffee by day, and a legion of potent cocktails by night. It might be a hole-in-the-wall kind of place, but you can’t miss this hipster-approved spot —  its red neon lights and buzzing atmosphere are a dead giveaway.

Beirut might have developed an aptitude for entertaining, but none are as dramatic as a trip through its souks. The Souk el Tayeb stands out for being Lebanon’s first farmer’s market. Held every Wednesday and Saturday, the modern interpretation of a souk offers everything from organic food made traditionally to handmade crafts by lesser-known artisans.

Housed in one of the last few Italianate-style mansions from the early 1900s, the Sursock Museum is an attraction in itself for not only its pretty demeanour, but also the over 800 works of contemporary art within — both local and international. The ornate building was once the centre of Beirut’s cultural life. Today, its permanent collection includes some of the most interesting and varied pieces from the Salon d’Automne exhibitions, making it a landmark art space for the city.

One of the Middle East’s most famous natural wonders, the Jeita Grotto is an extraordinary world away from the city with its amazing agglomerations of stalagmites and stalactites. Boat tours of the national monument will take you through its winding pathways comfortably; it’s the longest cave in the Middle East, so allow for more than 90 minutes for the experience.

A two-hour drive from Beirut will also take you to Baalbek, a temple complex that’s a monumental reminder of Rome’s former influence on the region. Known as Heliopolis during the Hellinestic period, the colossal structure remains to be one of the finest examples of Imperial Roman architecture till today and is now a UNESCO World Heritage site.

Travel Travel Guide Middle East check out Beirut Lebanon
Shatricia Nair
Senior Writer
Shatricia Nair is a motoring, watches, and wellness writer who is perpetually knee-deep in the world of V8s, tourbillons, and the latest fitness trends. She is fuelled by peanut butter and three cups of coffee a day.
Motoring Wellness Watches