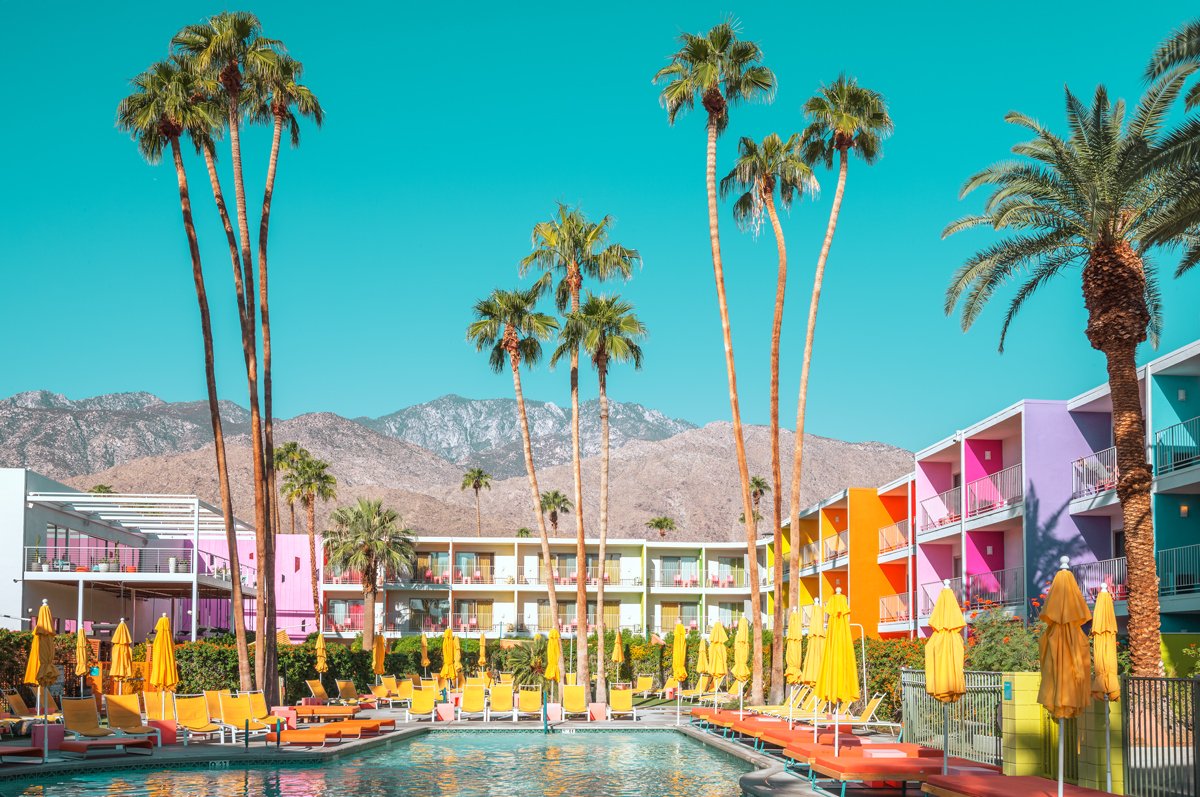 California’s quintessential retro desert town has come a long way since its days as the go-to escape for West Coasters desperate to escape Los Angeles’ steely grasp. Every April, the city gets put right back on the world map thanks to the trigger-happy, flower-crowned crew that returns for the Coachella Valley Music and Arts Festival. It is after all, a 30-minute drive, and an attraction just as bucket-list worthy as say, Las Vegas.

It’s easy to fall in love with the desert paradise. Sheltered by mountain ranges — with Santa Rosa to the south, San Bernardino covering the north and east and Mount San Jacinto closing the gap in on the west — Palm Springs enjoys a balmy breeze most months of the year instead of hot winds. The views, as you would imagine, are spectacular. You’d take in its incredible vistas and rugged beauty by day, and if you’re lucky, the Milky Way at night.

What used to be a sleepy town built on sacred hot springs owned by the Cahuilla Indians in the 1920s, is now an area synonymous for leading the cause for Midcentury Modernist design. It’s a dream for design enthusiasts — throw a rock and chances are it’d land on an Architectural Digest-worthy home.

For many, Palm Springs will always be an escape from the city and into the desert-modern lifestyle, and it is for the same reason why it’ll always be loosely associated with the Rat Pack. Frank Sinatra commissioned his first holiday home from modernist architect E. Stewart Williams, before Dean Martin, Nat King Cole, and Sammy Davis Jr followed suit. The neighbourhood was awash with Hollywood biggies — it was the annexe of glamour. Today, it’s where the modern flirts with Hollywood’s golden past, a time-warped concept which works perfectly well for the hip well-heeled traveller.

Here’s what else SoCal’s biggest treasure has to offer, besides lots of pretty photographs.

Since the El Mirador Hotel and its pink Byzantine tower opened its doors to the public in 1927,  hotels have become such an inimitable part of the culture and history of Palm Springs that it’s almost impossible to find one that doesn’t ooze charm. Many of its early properties have been refreshed, but few still stand out amongst the rest.

With an architecture and design that so wholeheartedly embrace its environment, The Ritz-Carlton on Rancho Mirage fits the bill as a luxury desert sanctuary. The view is refreshingly different here — instead of peering up at the mountains, you’ll instead enjoy a birds eye view of the Coachella Valley below. The luxury resort has all the savoir-faire that you’ll expect from a Ritz, but there are plenty of hiking trails and some of the best vintage shopping spots nearby should you wish to venture out.

For a crowd less stuffy, the Ace Hotel & Swim Club has been a bastion of California cool since it settled into the original 1965 Westward Ho Hotel. The restored property is an eclectic 180-room hipster haven for the young ones, with a palpable party vibe that lingers permanently in the air. It’s also packed full with all the retro accoutrements you could possibly dream of, from photo booths to vintage electronics deemed unrecognisable by anyone younger than 40. Vintage National Geographics fill the racks here, and its restaurant, King’s Highway, used to be a 24-hour Denny’s — of course.

The brainchild of Ezra Callahan — who happens to also be Facebook’s sixth employee — Arrive Palm Springs is a glamorous mid-century modern space filled with geeky tech easter eggs. The hotel is located in the uptown design district, within the clutch of everything from hot springs, and shopping spots to hip dining venues.

Its communal living concept also means its 32 rooms are built around the pool, but there are private patios with cozy fireplaces to cozy up to the most breathtaking sunsets the San Jacinto mountain range can offer.

Yet another architectural-gem-turned-accomodation is The Monkey Tree, a 16-room property that was famously the rendezvous point of Marilyn Monroe and a certain American president. Designed and built in 1960 by renowned mid-century architect Albert Frey, the building underwent careful restoration to become the sprightly yellow and blue-dressed property it is today.

The mid-century furniture within — many salvaged from flea markets and estate sales — is an effortless blast from the past, as are the original music posters by American graphic designer Rex Ray. The Monkey Tree is the only place after Cleveland’s Rock & Roll Hall of Fame that houses the full collection.

If architecture’s your main draw, The Modern Tour is perhaps the best luxury tour guide to partake in. Founded by Michael Stern, author of several notable art books, the three-hour bus and walking tour is an exploration into iconic neighbourhoods and showcases some of the finest examples of Midcentury Modern homes, both inside and out. Celebrity residences are in the mix here, including Frank Sinatra’s, Elvis Presley’s, and Elizabeth Taylor’s amongst many others.

Besides a curated selection of brilliant modernist works, the Palm Springs Art Museum also boasts significant works by contemporary and glass artists. The desert theme is always explored here, some in sci-fi utopias the Brave New Worlds: Explorations of Space exhibition, and others via Post-Impressionist and Abstract Expressionist paintings.

As a popular weekend getaway, expect Palm Springs to serve up a pretty decent dining scene. Mr. Lyons Steakhouse is one for meat lovers who also want to be transported into a different place in time, one which probably saw natives like Bob Hope and Sinatra hanging out over commendable steak frites or burgers. The swanky retro spot will also indulge you in a well-made classic cocktail or two, courtesy of its adjourning bar Seymour’s.

So.Pa is another to bookmark, a hidden alfresco-only restaurant at L’Horizon that gained quite a reputation when Michelin-starred chef Giacomo Pettinari — of El Bulli and Valentino fame — first took its helm. He might’ve since returned to Italy, but an equally star-studded replacement, chef Chris Anderson of Alinea and Moto, has taken his place. Dishes here have a Middle Eastern flair — the house-made labneh with grilled bread and honey mussels with coconut are but two of the best dishes there.

Because it’s centrally located in Inland Southern California, Palm Spings is an easy two-hour drive from Los Angeles or San Diego. If you’re coming by air, its international airport is located just five minutes from downtown, accomodates a wide range of carriers daily that include Virgin America, Delta, and Air Canada.

The best time to visit is predictably between January and April, as well as November, when temperatures are as hospitable as a desert city can get; the latter sees vintage and farmer’s markets in full swing.

Modernism Week — a must-see event for any design or architecture lover — takes place in February, while music festivals such as Coachella and Stagecoach hits the grounds come April.

Any others months see either scorching heat or wintery frost, so plan your vacation according to what you’d like to experience.

Travel Travel Guide California Palm Springs United States of America
Shatricia Nair
Senior Writer
Shatricia Nair is a motoring, watches, and wellness writer who is perpetually knee-deep in the world of V8s, tourbillons, and the latest fitness trends. She is fuelled by peanut butter and three cups of coffee a day.
Motoring Wellness Watches