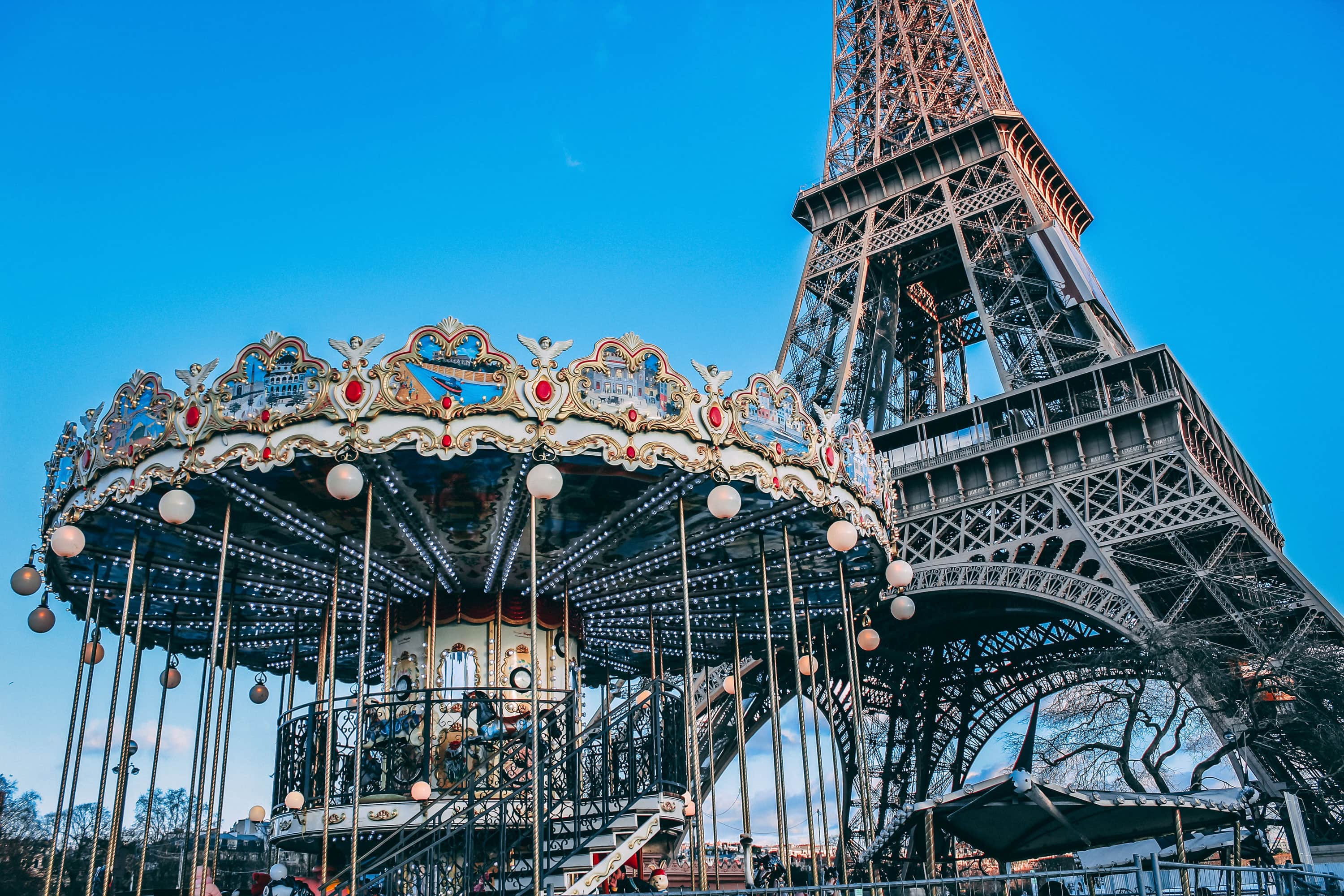 Here are the top 10 Instagrammable places in Paris

In 2018, the city hit a new record high in terms of tourists. Forty million people visited Paris that year alone — which equals to around two thirds of the whole French population. In this day and age, the average traveler can pull out a professional quality picture (or very close to) from his pocket, and no matter the gear used to shoot these souvenirs, all that really matters is the end product. Besides, remember: the best camera is the one you have with you.

But before you take that cool picture, you need a unique location.  And luckily, you’ve decided to spend some time in the French capital. So here are the top 10 Instagrammable places in Paris you should really visit if you want to impress your friends with your photography. 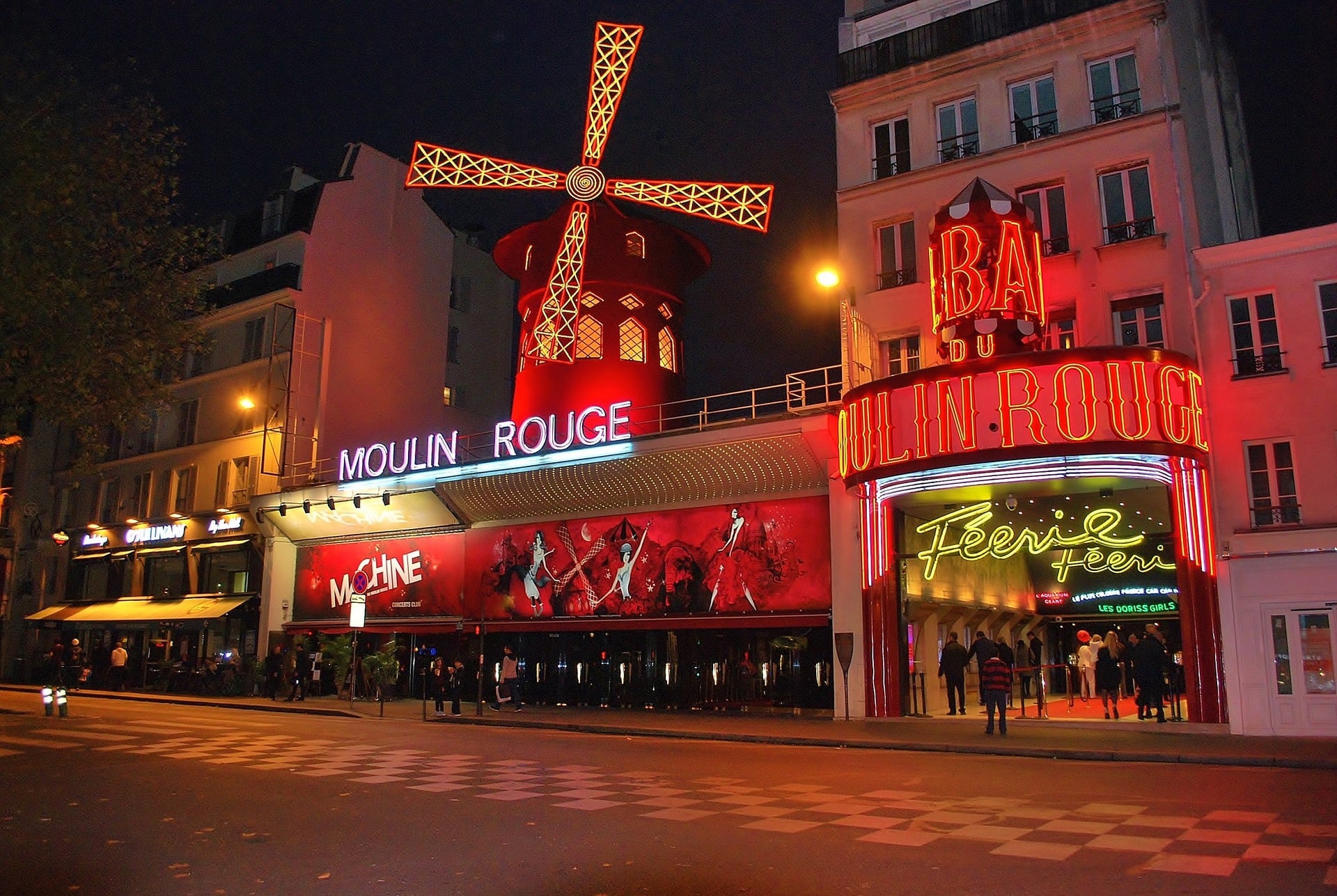 The red windmill doesn’t need any introduction: the most famous cabaret in the world is a sight you need to experience. The place burnt down in 1915 and was rebuilt in the span of 6 years, and never really stopped from then. Located just two metro stops away from le Sacré Coeur, the Parisian establishment is still very active. It is separated in two different venues: Le Moulin Rouge, that serves as the regular cabaret (and that also houses a TV studio) and La Machine du Moulin Rouge, which is the place’s night club. Throughout the years, the landmark never lost of his prestige. 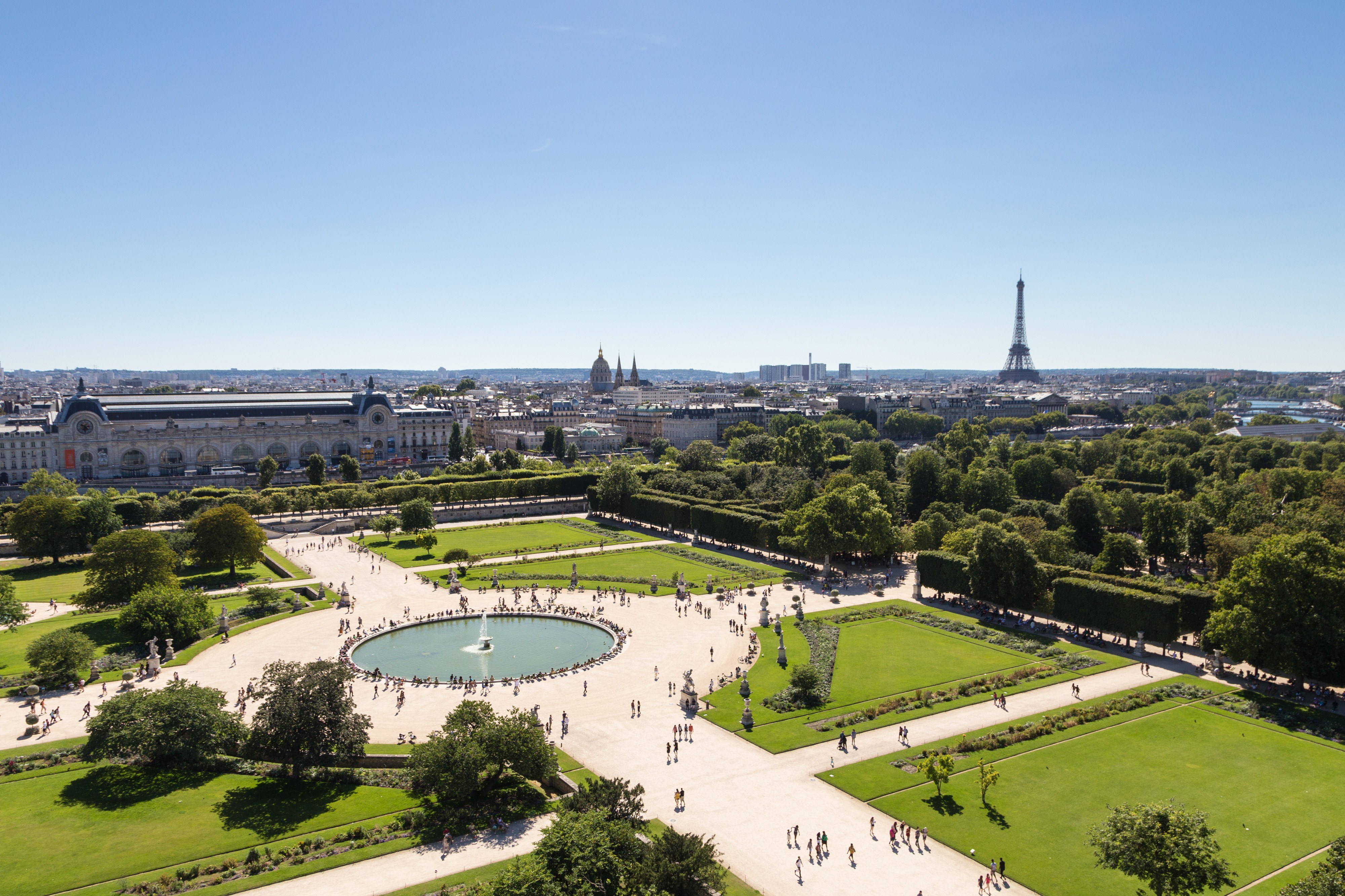 French gardens: their effortless aesthetic, green shapes and mineral or vegetal sculptures… Le Jardin des Tuileries is for sure one of the most visited places in Paris. The 26 hectares park is the ideal destination to have a picnic in the very heart of the French Capital. Right by rue de Rivoli and the Louvres, les Tuileries will be your favourite destination to kill time on a sunny afternoon. The fountains, statues and green areas will make for the perfect snapshot in your stay (as long as the sun is out). 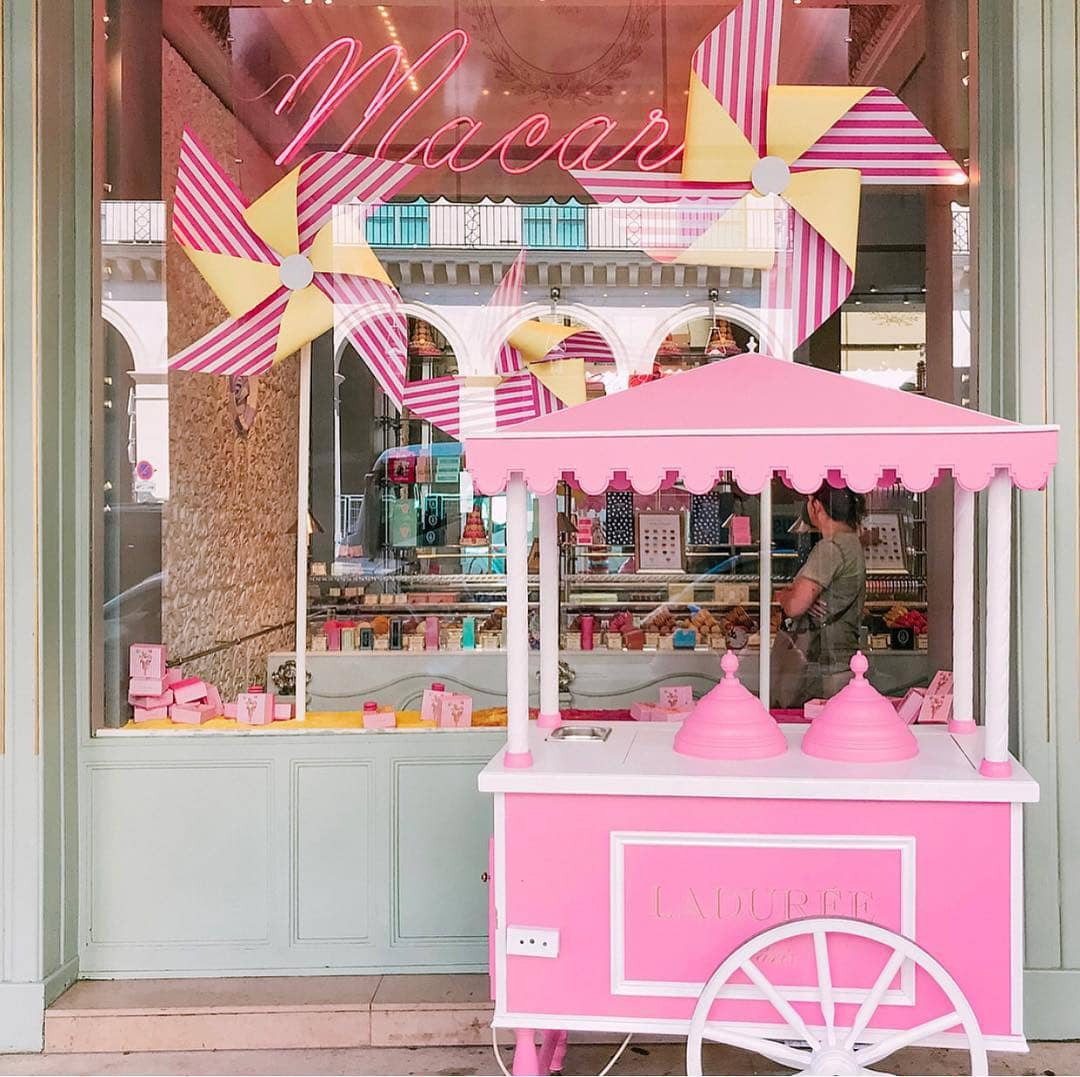 The macaron Mecca is one of those private places that have such a huge prestige that they have become a national landmark. Everybody wants a piece (or 24) of Ladurée’s sophisticated delicacies. The walls of the establishment have become just as important as the products they sell. The brand’s identity lives both through the food and in the walls. Its classical, soft, Parisian chic continues to seduce the masses by the hundred of thousands. It obviously is one hell of a colour palette! 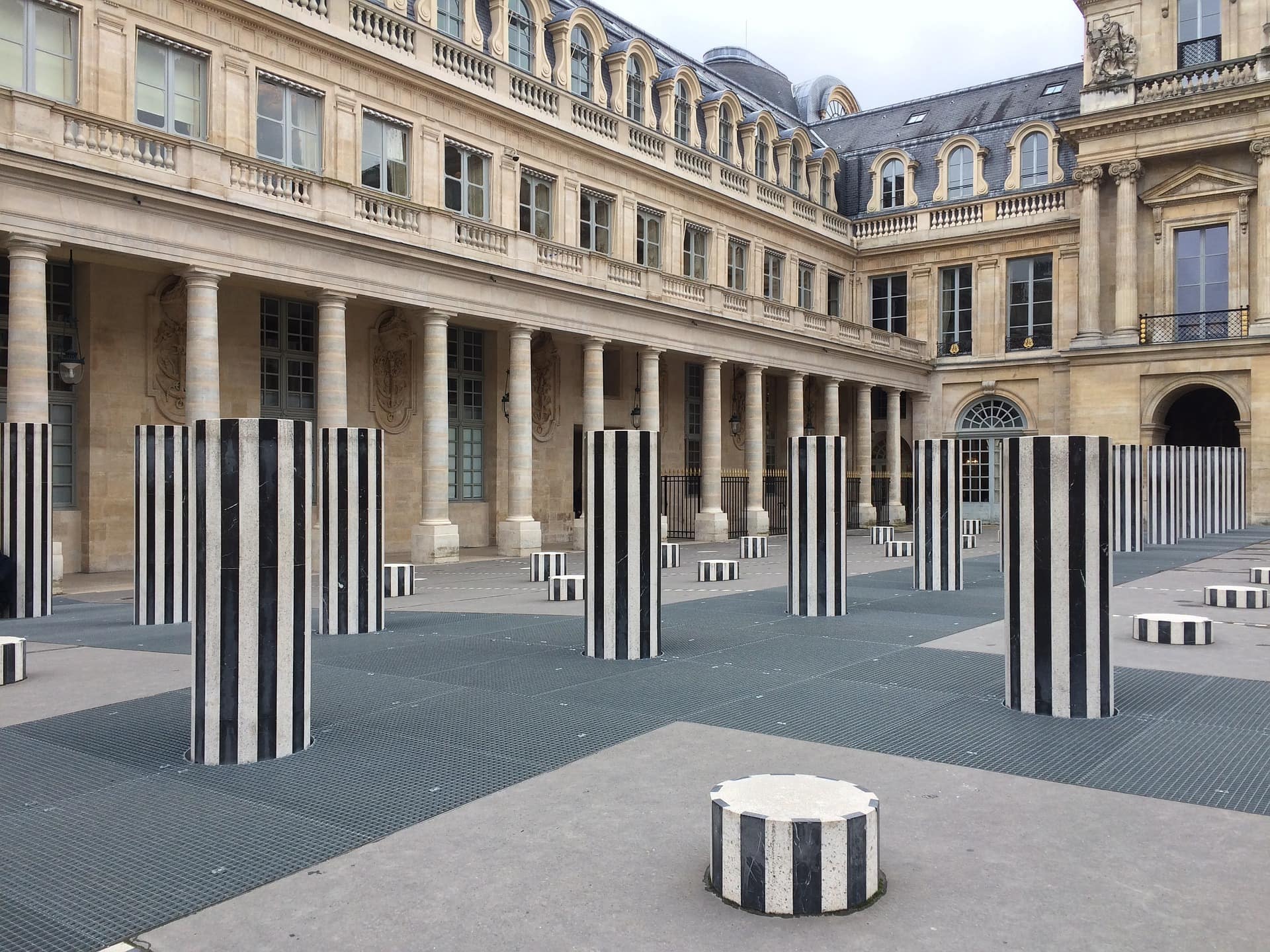 Next time you wander by the Louvre, go see its columns. The former courtyard-turned-parking-lot of the palace has become increasingly popular on the Internet. Especially these past few years, with the growing hype that accompanied it on social media. The columns of Buren, named after the artist, have become a symbol of French audacity, even though critics have been rather hostile when the work was first unveiled, in 1986. Three decades later, they’re seen as one of Paris’ most coveted monuments. And yes, it’s perfect for your Instagram feed. 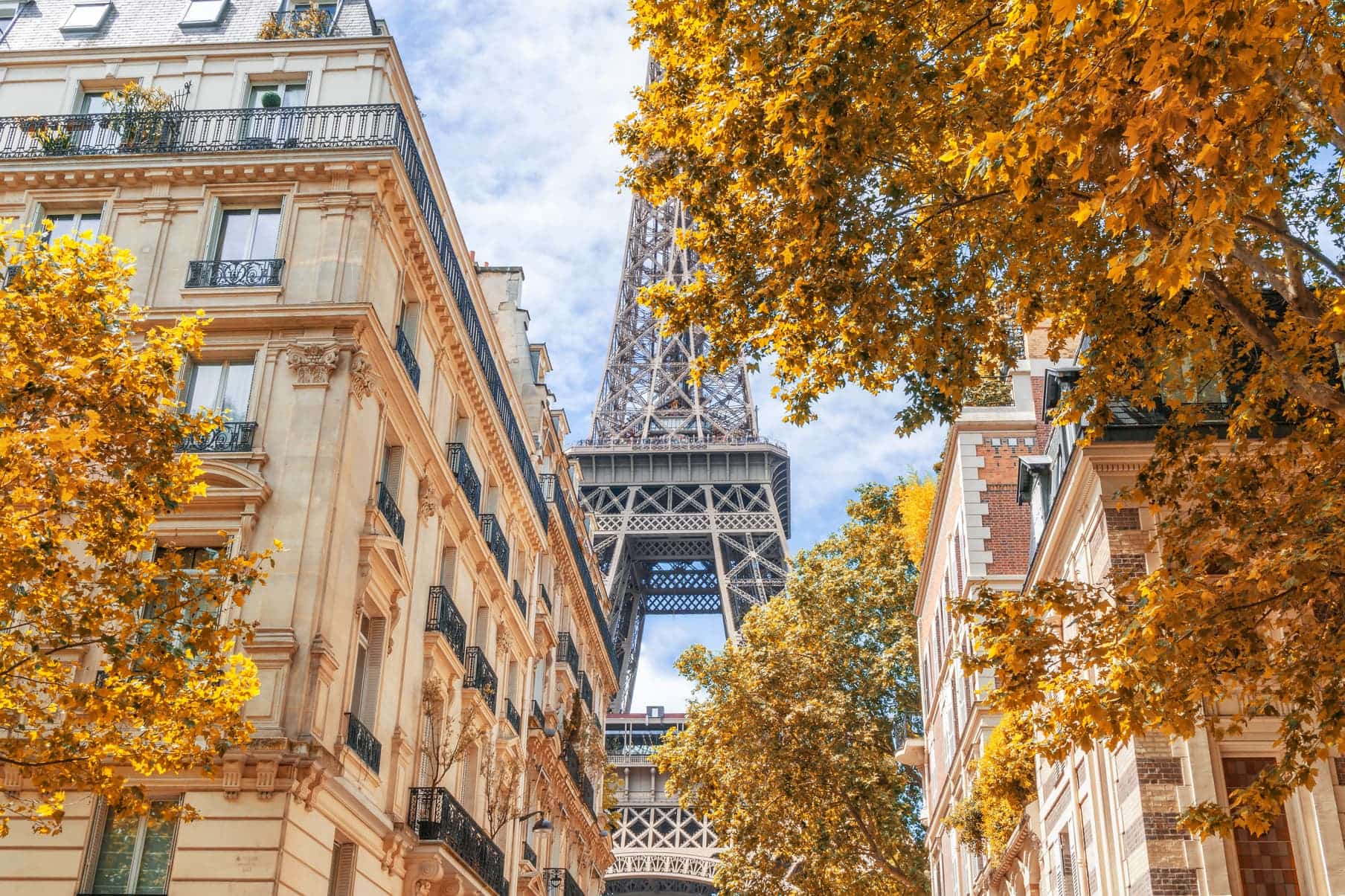 Ever wanted to feel like you’re living in a movie? Paris can give you that, if you just visit this residential area in the 7th arrondissement (it is of course open to the public) called rue de l’Université. While the Haussmanian buildings and paved road gives you a sense of Parisian pictural identity, the Eiffel Tower in the backdrop seals the deal. Watch the likes and comments pile up as you take your mandatory candid photo there! 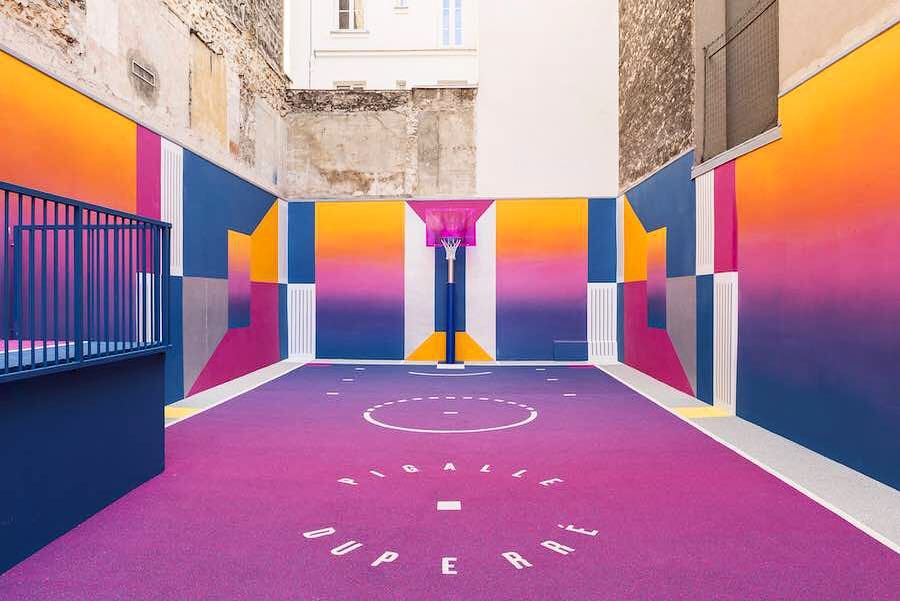 This one speaks to all the sport enthusiasts, as well as the street art lovers. The Duperré court is at the very heart of the Pigalle area, in the middle of the eponymous street. It is not only full of history, but to this day, it remains a staple in the local community. Despite its international exposure, through Nike and LeBron James, or the Pigalle brand, for instance, the playground never lost its core identity: the one of the people that founded and passed on the place. Finding the perfect conditions to visit the court isn’t easy, as it serves as a training court for the neighbourhood’s young teams. But even through gate, a photo’s worth it. 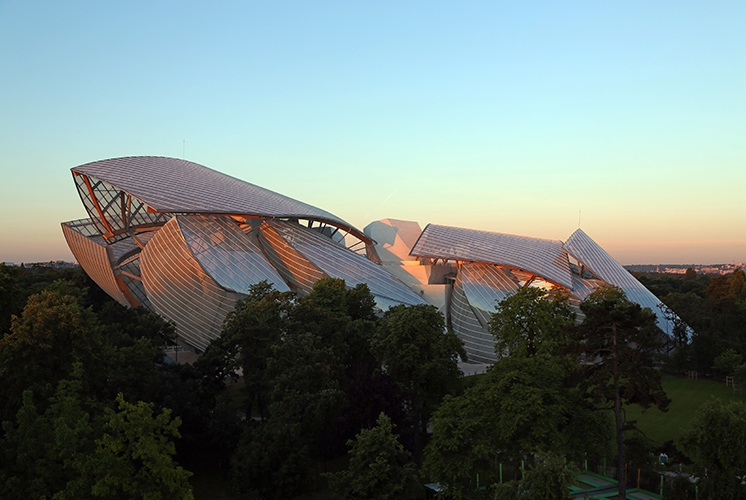 Architecturally speaking, this has to be one of the boldest, wildest buildings Paris has seen for a long time. The Frank Gehry structure was born in 2006 and is part of LVMH’s plan to bring culture closer to the masses. Located on the western side of Paris, next to Le Bois de Boulogne, the futuristic building bathes in greenery and seriously looks like some sort of UFO. Guaranteed hit on each and ever feed! 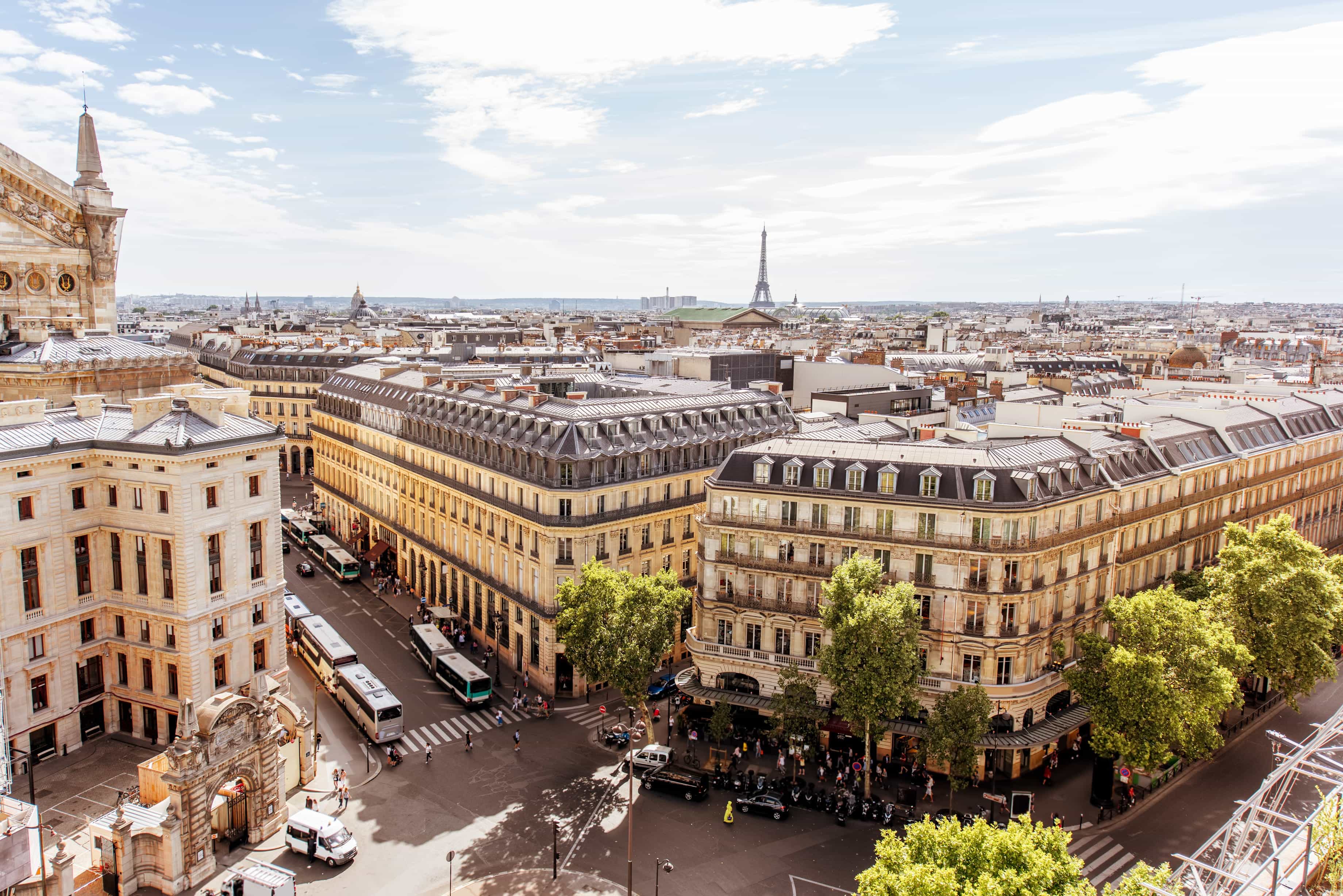 The eighth arrondissement is located at the very centre of Paris. From this panoramic point, you can admire the Eiffel Tower, the Sacré Coeur, the Garnier Opera House and Notre Dame (all at once). The rooftop spots in Paris are many, if you know the city well enough, but this one at Galerie Lafayette Paris Haussman really is the cherry on top of the cake! Ideal after a whole afternoon spent in the department store. If you feel like it, coffee and delicacies are optional. 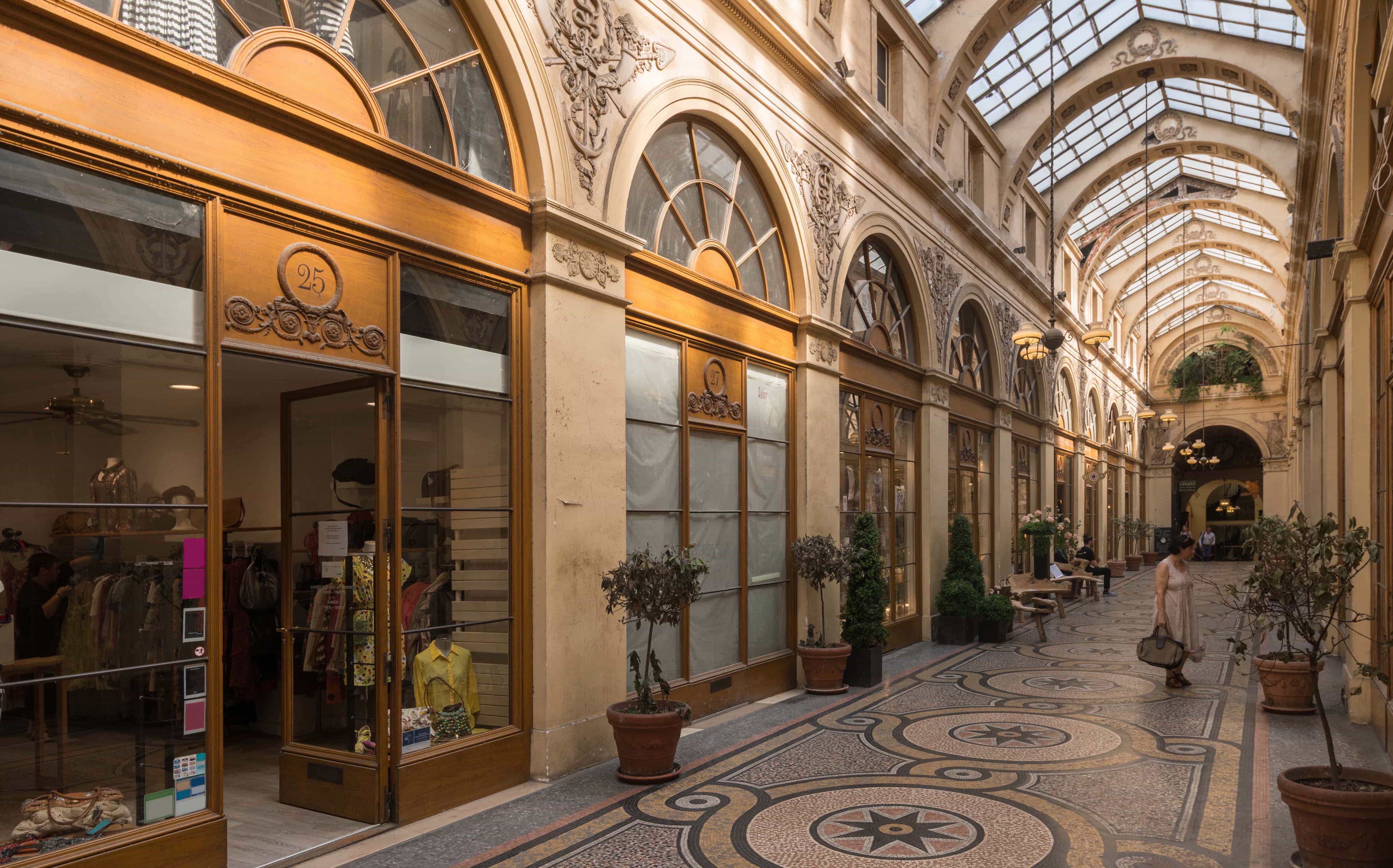 9
The hidden passages of old Paris

These chateauesque open corridors stay far from the masses eyes, yet they beg to be known. They are called “passages” and are available by the dozen, in the French capital. You can find them around Grands Boulevard, Belleville, République or Palais Royal. All have their charm and character. On a rainy day, you’ll be delighted to visit one of them, as they offer comfort with tons of nice traditional restaurants and other golden, low-key shops and eateries very few foreigners know of! 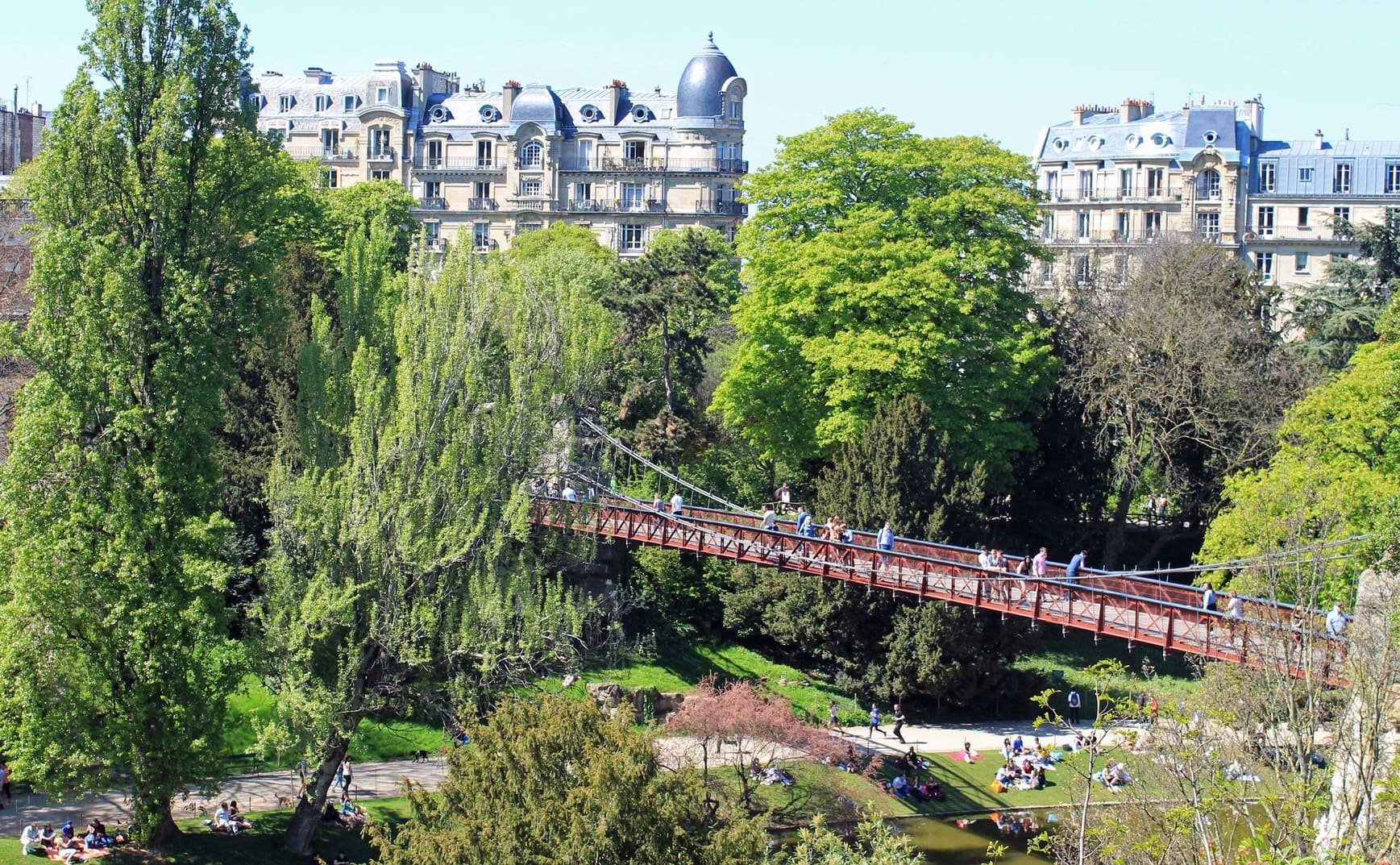 The Parc des Buttes-Chaumont opened in 1867 and is about 61 acres wide. Located in the 19th arrondissement, the park is a favorite. Its 5,5 kilometres of roads and 2 kilometres of paths make it the perfect spot to jog or ride a bike during a family stroll. The art nouveau architecture that’s present throughout all of the park will for sure make you forget all about 2019, at least for a few seconds! The scenery is of course the star of the place, with a great panorama over a huge part of Paris and its suburbs. Don’t forget to lookout for its restaurant and bars too; you might very well be positively surprised!

Instagram Paris France Top 10 best instagram places
Tawfik Akachar
Senior Writer, Paris
Tawfik is a pop culture enthusiast that has a soft spot for the study of emerging movements, casual chic fashion, and technical clothing. Although he loves different foods from all parts of the globe, he considers fried chicken to be the best dish, ever.
Fashion Music Design Art Travel Entertainment Technology Food