For those constantly immersed in the gleam of newness and fast-paced lifestyle of Hong Kong, a relaxed historic tour in Europe can provide a refreshing change of scenery. History and architecture buffs in particular are increasingly looking towards destinations in Central Europe, and Kraków, Poland’s thriving medieval metropolis — known for its Renaissance-era plazas and Gothic churches — is only growing in popularity. In Kraków, the romance of the well-preserved medieval Old Town mixes with modernity — interspersed with charming new cafés, designer boutiques and interesting revivals of traditional Polish food and drink culture.
Born and bred in this former royal capital of Poland, Jakub Lewandowski moved to Asia over a decade ago. Here, he works as the Public Relations Manager of The Mira Hong Kong, the city’s first member property of the Design Hotels collective.

He is a graduate of Kraków’s Jagiellonian University — the second oldest educational institute in Central Europe, dating back to the 14th Century with premises spread across the most historic parts of town. Since moving from his hometown, Lewandowski reminisces to his days of exploring Old Town in between lectures, comparing it to how the city has evolved in the last ten years. Celebrating this intermingling of old and new, he’s curated an insider’s list of places to stay, eat, drink, shop and see in Kraków — plus the best treats to bring home for your loved ones. 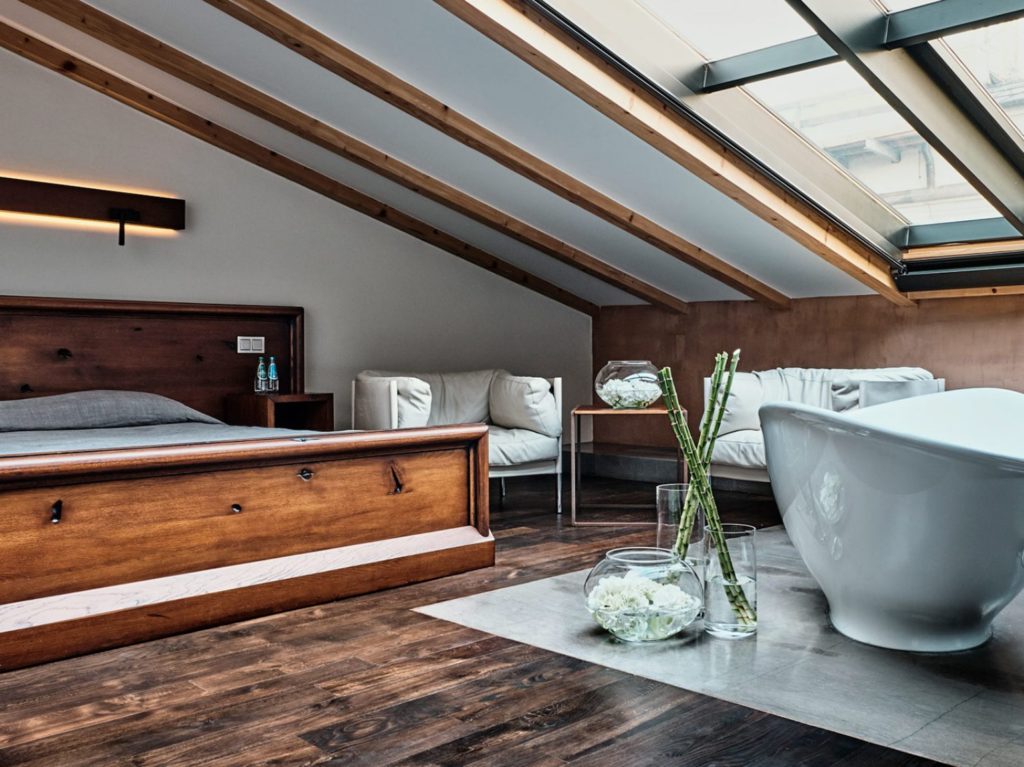 “On par with other five star luxury hotels such as Hotel Rod Roza and Copernicus which, aside from their prime locations, are among the most beautifully appointed rooms in the city, Hotel Stary (despite its name translating to ‘old’) is a relative newcomer to the hospitality scene, making waves since its opening a decade or so ago. The hotel has been transformed by the Likus family of entrepreneurs from a worn-out 14th century tenement, and is positioned just off the Main Market Square on the corner of Szczepanska Street. Their intimate wellness zone in the underground cellars featuring a salt chamber is top-notch while their suites (awarded the most beautiful hotel interior design award in Europe by the Parisian Villegiature Awards) will really make you want to stay forever.” 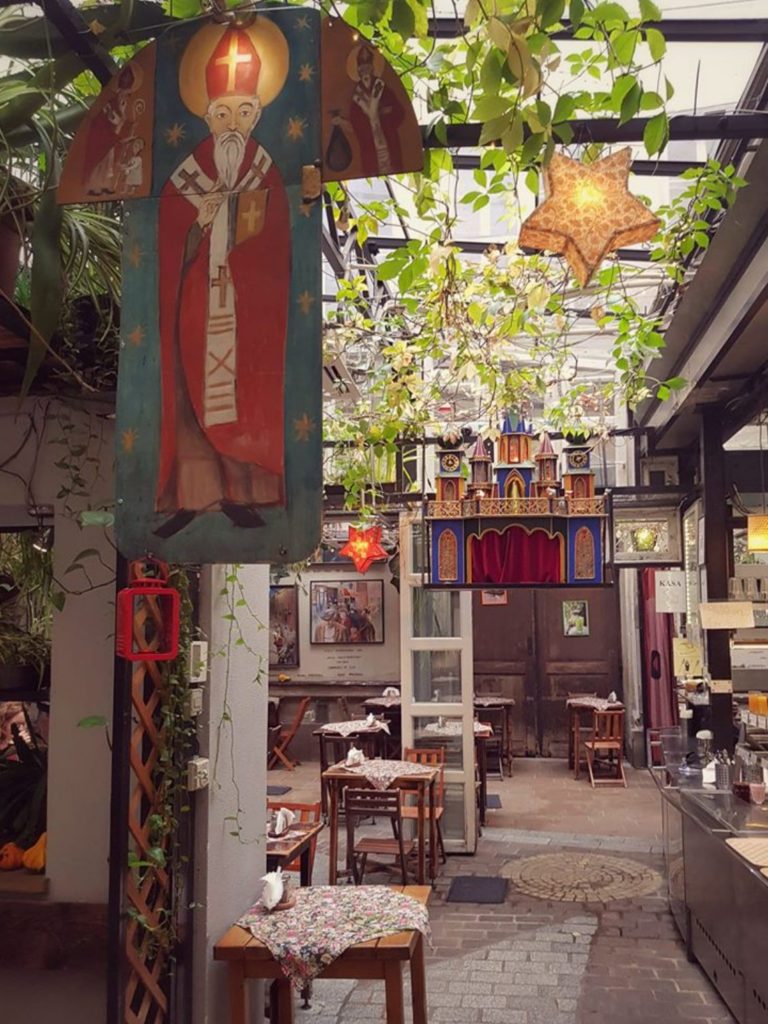 “After your mini hike in the morning, head to Chimera for Polish cuisine in an authentic 14th century cellar. There’s a beautifully sun-drenched orangerie (greenhouse) for al fresco dining in the summertime, and it’s equally cosy during winter with an authentic fireplace — still being used to roast meats — where you can also warm up after a day of sightseeing, shopping, or gallery hopping. Opt for the casual self-service salad bar or tuck into traditional game meats, hearty stews, and aged mead that Polish noblemen used to imbibe during the golden days of the Renaissance. Established shortly after modern-day Poland opened up to the world (after half a century as a USSR-satellite state), Chimera has long been a popular diner for academia, locals, artists and government workers, surviving the fads of time with amazing ambience and consistent quality.” “As Poland was wiped off the world map through history by three neighbouring powers, and with its territory once reaching as far as the Black Sea — it’s no wonder its culinary traditions are so heavily influenced by a rich mix of cultures. Among the sweet treats which often appear on the tables for afternoon tea snacks are sweet fried Berliners, or paczki, typically filled with rosehip marmalade, covered with lemony icing with candied orange peel, or simply dusted with icing sugar.
Among locals’ favourites is Michalek, though it’s really hard to go wrong with any of them as long as they’re sold fresh on the same day. Take a short stroll off the Main Market Square to get your half-dozen sinfully divine calorie bombs.
Fun fact: In Christian tradition during Fat Thursday — which leads up to Ash Wednesday marking the beginning of Lent — Poles devour as many paczki as they possibly can and those who don’t make them at home will spend hours lining up at their favourite pastry shop. While it’s a matter of personal preference, families of different ancestry backgrounds will swear by a certain pastry shop as the benchmark for paczki and never betray their allegiance.
Another case in point, Poles are so proud of their traditional pastries, Dunkin Donuts never survived the test of time in Kraków and shut down their outlet shortly after opening in the mid-90s.” “You haven’t been to Kraków if you haven’t stepped into the Jewish quarter. A short walk away from the city’s core and noted for its hip vibes, the neighbourhood is dotted with charming cafes, quirky restaurants and more recently inventive dining concepts including decent sushi bars, tea houses and eclectic bars with live entertainment that never close before dawn. Among these establishments there is one that’s almost an institution. Cafe Singer boasts bohemian interiors within a soulfully antiquated space celebrating the timeless Singer sewing machines — here repurposed as tables lined up on the sidewalk outside — and the times when every reputable household used to have one.
If you’re there on a Sunday, check out the morning flea market where you can pick up some intriguing memorabilia displayed next to occasional rare finds and second-hand fashion items.

A must try among homemade pies is a decadent nougat, an original and secret recipe that’s a cut above the rest. If you’re not a sweet tooth, the quaint cafe by day / lively bar by night serves a whole range of ice cold vodka out of frosty bottles, and bar bites inspired by traditional Jewish dishes.” 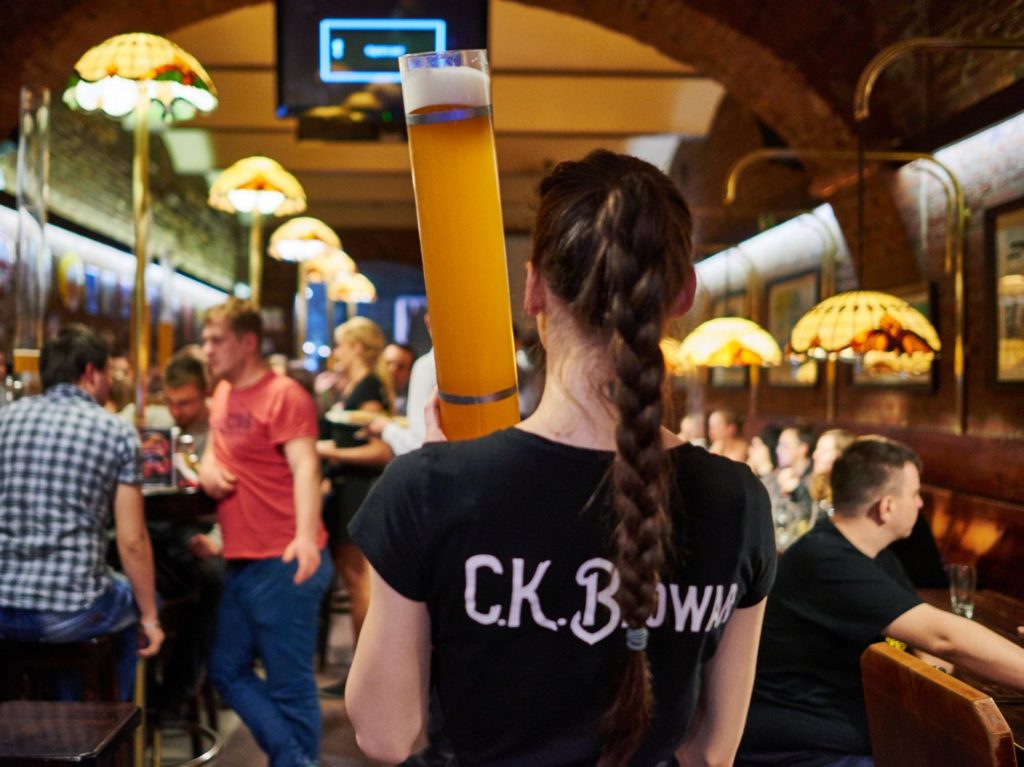 “For the fans of German beer gardens and hearty cuisine, CK is the only gastropub and microbrewery in Kraków brewing unfiltered and unpasteurised beer on site according to the old Austro-Hungarian recipe. They’re served along with traditional hunter-style stews and hearty roasted pork knuckles. It’s a great place to start your bar crawl and get to know your region-specific brews, while the majority of the ‘beer gardens’ all around the Main Market Square and its charming streets leading to it primarily feature common commercial brews and global brands.” 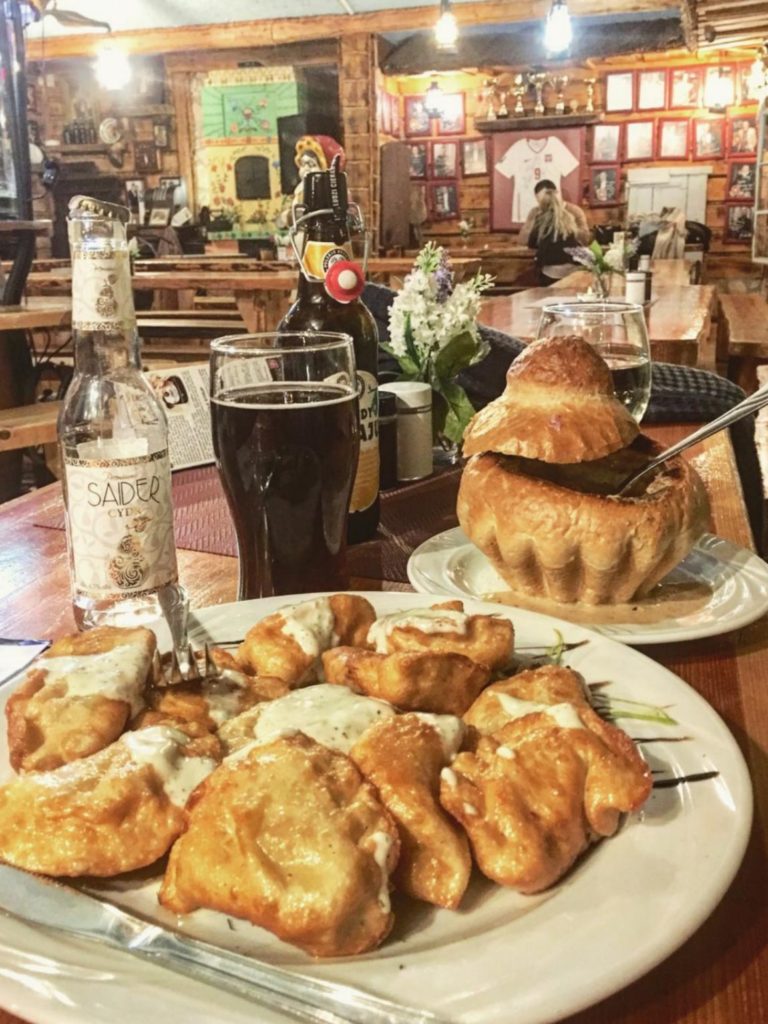 “In my job, guests from overseas often ask me how I find Cantonese food compared to Polish cuisine. The dainty dumplings that made their way into Polish food culture centuries back are a link that makes the best conversation topic over the yum cha table here in Hong Kong. Nobody does them like your grandma, even your mum (hopefully she doesn’t read this one), and as kids we were all employed to wrap the pockets of dough with stuffings ranging from classic cottage cheese with butter-fried onion and mashed potatoes, to buckwheat and forest mushrooms, to anything like seasonal summer fruit (think forest berries hand-picked from the market) served cold with sweetened sour cream.

If you don’t have relatives in Kraków that can treat you to the most authentic experience, there’s a range of restaurants serving them from upscale traditional Polish establishments to cha chaan teng-style eateries which serve quick, tasty, good value meals to hungry students, the working class and tourists alike.

Among them U Babci Maliny is a nearly legendary institution dishing out Polish and European cuisine including Hungarian-style potato pancakes and wild boar game within a charmingly retro setting. Two branches are located at Szpitalna Street and Slawkowska Street.” 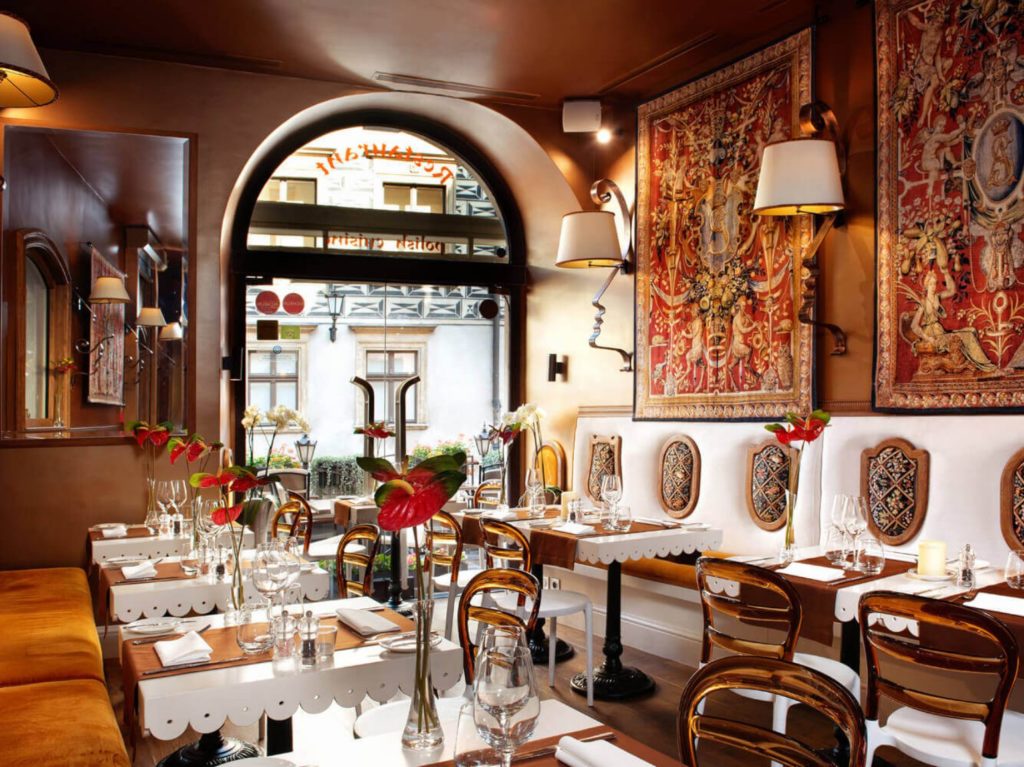 “Another spot on your ‘pierogi trail’ worth a visit will have you headed to Kanonicza Street, winding towards Wawel Castle. Just a few steps away from the famous Copernicus hotel, located on the ground floor of three-suite luxury accommodation Kanonicza 22, Pod Nosem is well known for scoring a Michelin Plate for its modern renditions of Polish cuisine. Their pierogi win over the hearts and bellies of foodies from back home and afar.” 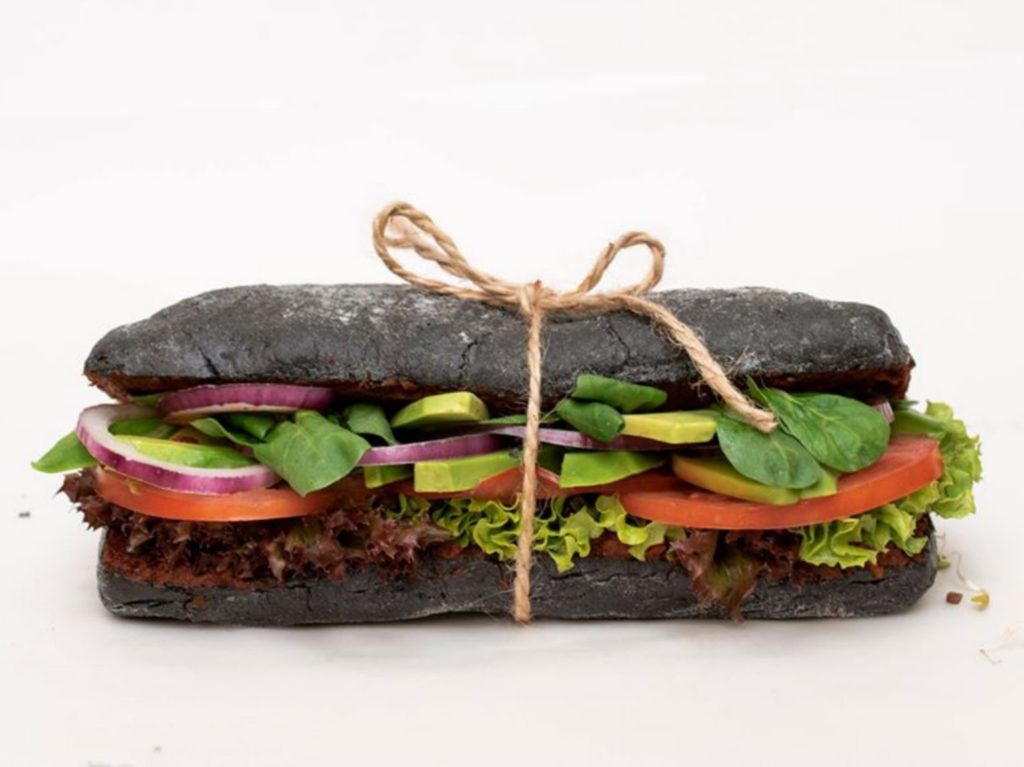 “For those who’ve had their fill of sausages, wild game, pork knuckles washed down with beer, and traditional dumplings, there’s a lighter side of dining in Kraków that’s slowly but surely taking a foothold. Recommended as one of the best sandwich bars in the city (and located nearby the former Gestapo HQ for those who wish to tick off some dark tourism sites) this vegan cafe attracts a younger crowd with its modern twist on Polish staples and classics.” 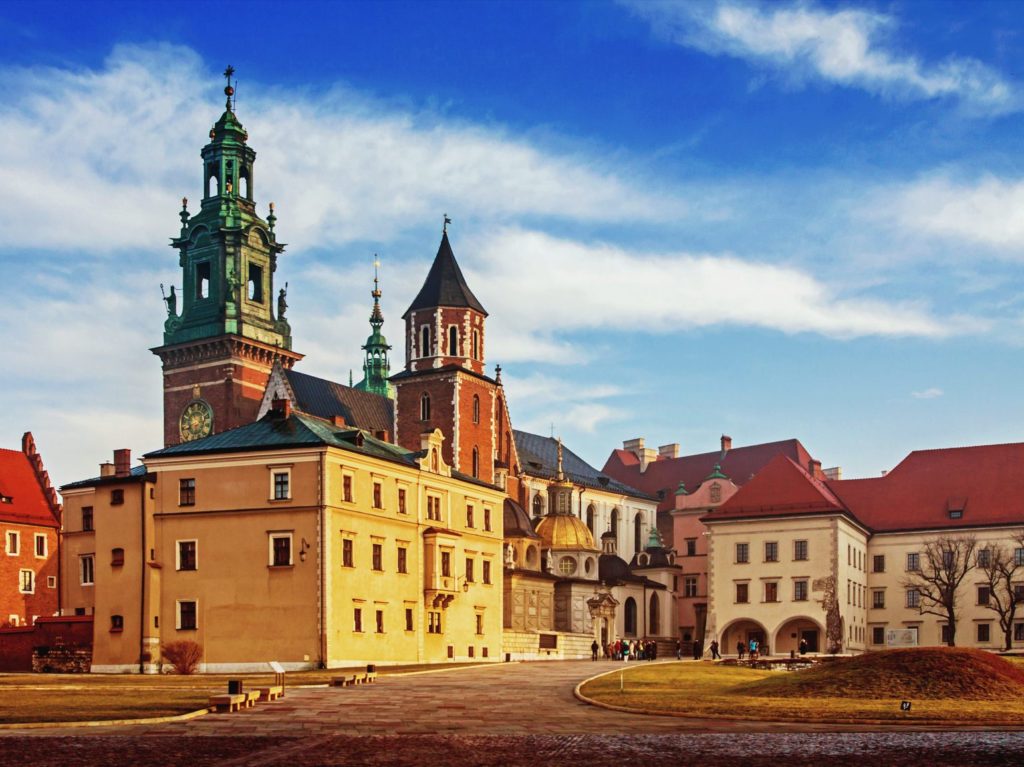 “Assuming it’s your first visit to Kraków, visiting the impressive castle hill overlooking the Vistula River and the city’s picturesque Old Town is a must — just like taking the tram up to The Peak in Hong Kong, no matter how cliché it may sound. If it’s spring or summer, it’s best to visit early in the morning, ideally just after 6am to avoid the crowds and feel the aura of centuries of architecture and culture, as the church bells announcing the morning mass resound through the walls. If you’re a history buff, opt for a guided tour to the catacombs where the crowned heads of state have been buried in stone sarcophagi, and climb up the bell tower for the awe-inspiring views.” 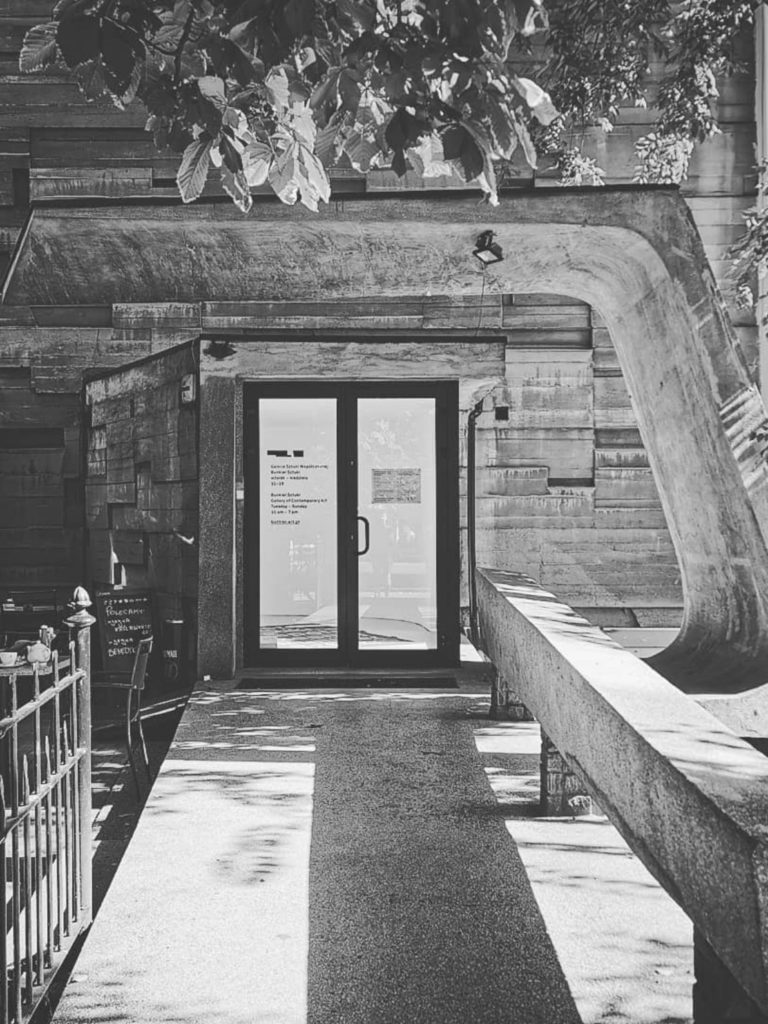 “Literally translating to ‘art bunker’ located within the former fortifications of the Old Town — wrapped by the green ring surrounding the charming city centre of Kraków — Bunkier Sztuki is among dozens of standout galleries that feature ambitious programmes and world-class artists. First opened in 1965 and shocking the city with its Brutalist style of architecture, the gallery exhibits ground-breaking contemporary and modern art by Polish and international artists.
One of my favourite collections I’ve seen there was by Japanese artist Shinji Ogawa who mastered pencil sketch replicas of iconic architectural sites across Europe, including one dedicated to Kraków’s Main Market Square. It was fascinating to meet Mr. Ogawa in person at Hong Kong’s Art Basel almost a decade later.” “Shopping lovers will want to make a stop at Likus Fashion Concepts, owned by an influential family of entrepreneurs whose boutiques are characterised by stylish interiors blending modern touches with classical architecture. The one in Kraków resides within a fully refurbished merchant townhouse facing the Main Market Square at cosy shopping arcade Pasaz 13. There’s also an al fresco café perfect for people watching with your morning café au lait and panini, or light meals and cocktails in the afternoon — a perfect pit-stop for the well-heeled crowd. In the basement, you’ll find a world-class deli, café and wine bar as well as a cellar that organises regular wine masterclasses (and where I had my first-ever morning tasting of boutique grower champagnes with René Geoffroy!). Pick up homemade Polish deli fare, chocolate truffles, and jarred condiments supplied to some of the best luxury hotel restaurants around town. Don’t miss the unforgettable lime and passionfruit cake!” 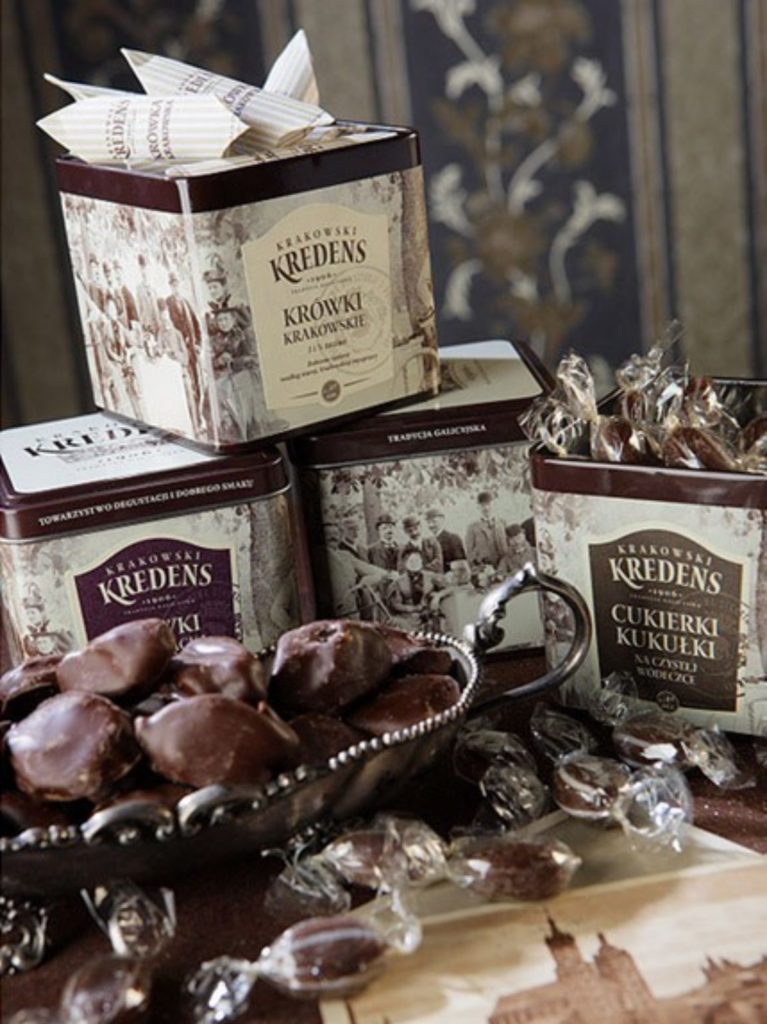 “If you’re scouring for Polish souvenirs, this time-honoured, brand-name deli stocking all the imaginable preserves, liqueurs and confectionery tins (depicting nostalgic city scenes from the pre-WW1 period) is your go-to place for gifts for your family and office buddies. Make sure to grab their caramel-filled, chewy ‘krowki’, a quintessential Polish treat.”

Krakow Poland Insider Guides Pierogies
Evelyn Lok
Associate Editor
When not trying out the latest beauty and wellness trends, Evelyn is likely enjoying a perfectly balanced negroni or exploring some of Hong Kong's best new places to eat and drink. At Lifestyle Asia she covers everything from the biggest events in town to interviews with Hong Kong specialists, with topics spanning art, food and drink, health, tech, and travel.
Beauty Wellness Culture Events Art Drinks Tech