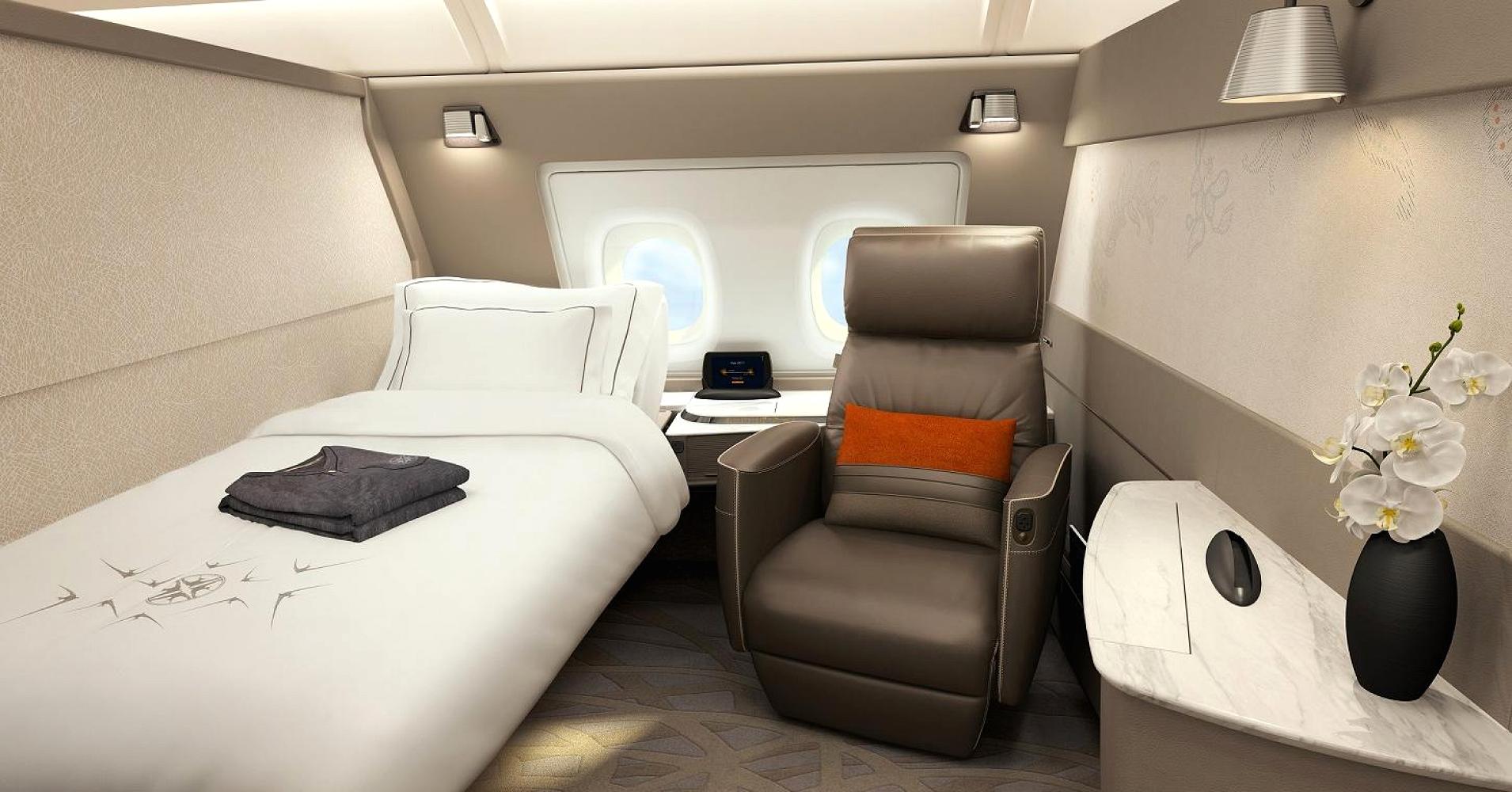 Here’s a fact you may already know, but we’ll just say it anyway: Singapore Airlines was the first airline to fly the double-decker Airbus A380 in 2007, which also marked the invention of the private superjumbo suite category.

Ten years later, the Singapore-based commercial carrier has unveiled its biggest cabin overhaul in over a decade with the second-generation Airbus A380. Boasting a capacity of up to 471 pax, the new A380s are home to six suites, 78 business class seats on the upper deck, 44 premium economy and 343 regular economy class seats on the main deck.

Sure, the new premium economy seats now offer more space and the business class ones feature newly-improved amenities (think in-seat power plugs, 18-inch touchscreen monitors and fully-reclinable seats), but the crème de la crème of the categories are the first-class suites — which you might just mistake as luxury apartments 35,000 feet up in the air.

The Airbus A380 will feature six suites (down from 12) that are more than twice the size of the first-generation ones — so the privileged few will definitely have the luxury of space. The suites are also flanked by high walls, ensuring the privacy you need.

Perched on the upper deck of the jumbo jet, the newly-unveiled suites have been relocated from the main deck in the previous generation. This move creates an ‘all-premium deck’, as the six suites will coexist along with the next business class seats. Akin to a luxury hotel, the first-class suites were redesigned to feature beds that sit perpendicular to the window, along with sliding walls that open up to the next suite.

And if you’ve always had trouble getting your well-deserved rest on flights, the new first-class suites will be a dream come true. Each suite has a bed which measures 76 inches by 27 inches, with two pillows and a cotton duvet that’ll ensure a good night’s rest — in fact, it’ll almost feel like you’re sleeping on clouds.

Additionally, the beds in the first two suites of each aisle can be joined to form a full bed. Along with the 32-inch HD in-flight entertainment system, this makes it perfect for Netflix sessions — especially when you’re travelling with a companion.

First class or not, you’d still be required to follow standard procedures, so you definitely can’t still be tucked in bed during takeoff or landing. The bed can be completely stowed, and each suite features a leather chair (upholstered by French designer Poltrona Frau) that swivels between 135 degrees and 270 degrees using an electronic control.

If we’ve convinced you to experience the exclusive first-class suites for yourself, the Airbus A380 will make its first flight from Singapore to Sydney next month. Flights to London is then slated to commence in March 2018.

Etihad Airways Singapore Airlines Business class First class suites Luxury Apartments airbus a380 singapore airlines first class
Dewi Nurjuwita
Senior Writer
Dewi Nurjuwita is a travel and design writer who can be found exploring the streets of foreign cities with passport in one hand and a cup of coffee in the other.
Travel Architecture Interior Design
Sign up for our newsletters to have the latest stories delivered straight to your inbox every week.