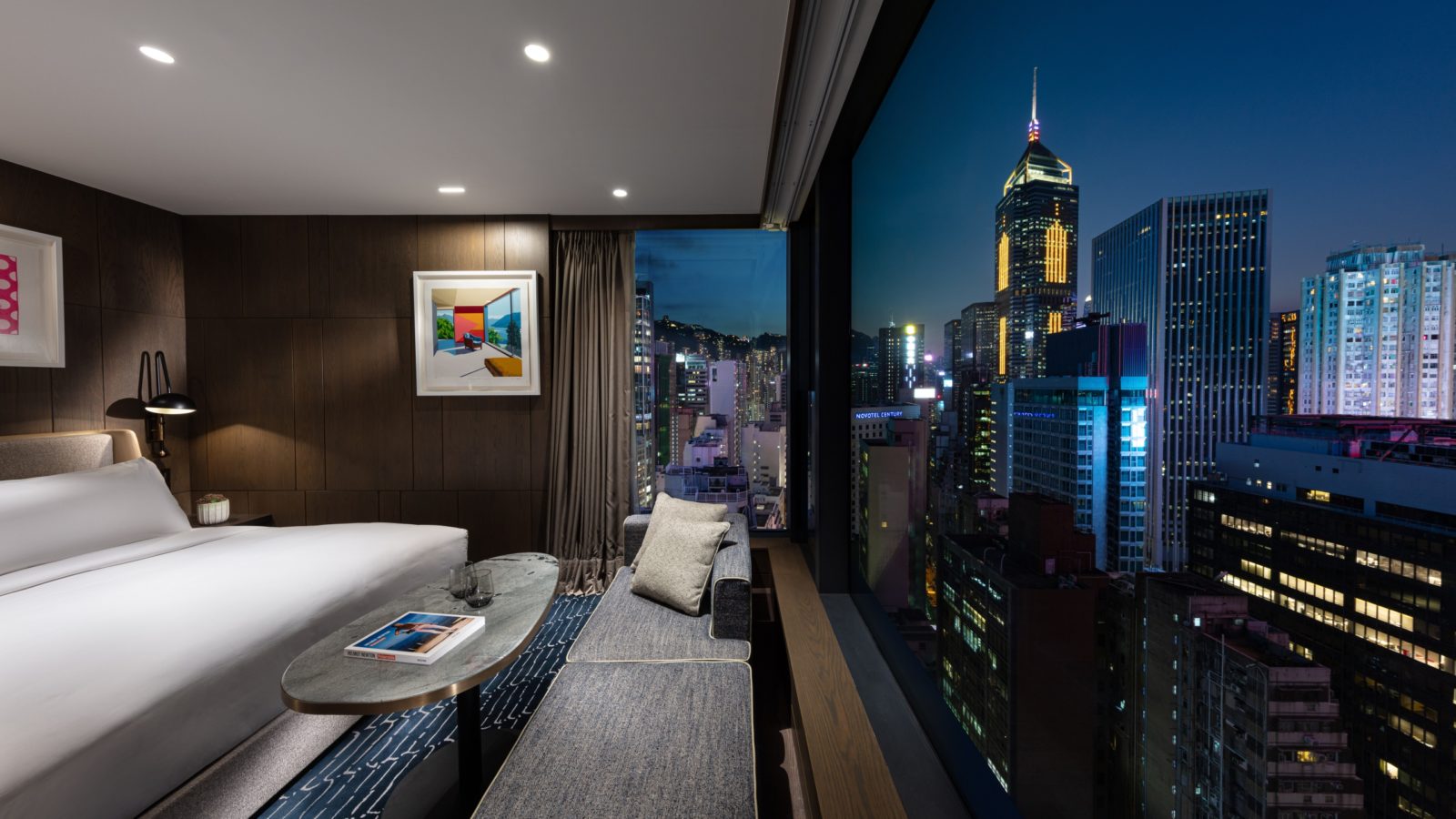 Hong Kong’s newest luxury hotel is none other than The Hari Hong Kong — scheduled to open its doors on 12 December 2020.

Located between Wan Chai and Causeway Bay, The Hari is owned and operated by Hong Kong hospitality company Harilela Group. It’s a long-anticipated homecoming of the brand, which opened its first property in London’s slick Belgravia neighbourhood four years ago.

Continuing off the success of its London property, enlisting Tara Bernard & Partners once again for the design of the hotel. The ground-up construction boasts 210 hotel rooms, which includes three rare rooftop suites with balconies, twin and king bedrooms, as well as corner rooms that offer preferential vantage points — looking out onto postcard scenes such as Hong Kong’s alluring mix of old and new, and what could even pass as Wan Chai’s very own ‘Flatiron Building,’ recalling the New York architectural icon.

There are also two restaurants in the hotel to look forward to: Lucciola, showcasing the freshest produce from Italy, and Zoku (meaning ‘clan’ in Japanese), an izakaya-style hangout with a long terrace where guests can dine under the stars. The Lounge also offers light bites and refreshments amongst the reading nooks fashioned after Dr. Aron Harilela’s own home library.

Whilst most would consider opening a hotel in the midst of the pandemic to be an incalculable risk, Harilela Group CEO Dr. Aron Harilela disagrees — saying instead that despite turbulent times experienced in Hong Kong, he sees it as a good opportunity to reinvest back in our city, something that the group has always been meaning to do.

“Hong Kong is a truly resilient city and I firmly believe that the city is going to bounce back through these unprecedented times. There is no doubt that Hong Kong will continue to hold a strong position on a global level and as a critical hub in Asia,” says Harilela.

One can also draw similarities between The Hari Hong Kong and the Harilela Group’s original golden goose, The Holiday Inn Golden Mile, which also opened off the back of one of the city’s most difficult periods — during the riots of 1966-1967. ”No bank was interested in financing the construction of a hotel then, as tourism was not a significant industry,” the late Hari Harlela told the South China Morning Post during one of the hotel’s early refurbishment projects in 1993.

“It certainly faced some challenging periods during its construction,” Dr. Aron tells us. “First, the riots in Hong Kong in 1967 triggered a lot of people to pull out their investment and leave Hong Kong; second, 1971’s Typhoon Rose, the biggest typhoon that the city had ever been through, flooded three of our basements. Construction took a long time, [but] my father carried on despite a lot of people saying, ‘let’s leave Hong Kong’.”

“Fast forward to just a few years ago, we decided to build The Hari Hong Kong in a prime location in Wan Chai. All was well on a socio-political level, and everything was going to plan. All of a sudden, the US signed a trade war, followed by the city’s social unrest and then COVID-19. It feels like a parallel — a rebirth in Hong Kong. [But] both my father and I, as well as my family, always have full faith in Hong Kong. [It has been] my family’s hometown for five generations.”

It seems only fitting that you’ll also find an intimate and familial approach to hospitality at The Hari.

Tara Bernard brings her signature contemporary twist to the property, mixing mid-century-inspired furniture with Italian marble finishes — in particular prizing a chic green veined stone that evokes the Harilela house hue, a motif that stretches across the Holiday Inn Golden Mile as well as the clan’s famed family compound in Kowloon Tong. Guests are met with a sprawling self-watering leafy facade that stretches three stories high, across the entire width of The Hari.

Dr. Aron Harilela also lent his design input to ensure a truly personal touch to the hotel. His love for books for instance has also translated across multiple spaces, with snippets of libraries stretching across the entranceway, lobby and guest rooms.

Inside the guestrooms, you’ll find a selection of ever-changing contemporary artworks from local and regional artists. Twin and King rooms are sectioned with glass doors echoing Hong Kong-style wrought iron gates, but can be left open to keep the room looking more spacious while also an element of decoration. In Twin rooms — with the need for greater privacy between friends or even colleagues, the press of a button immediately blurs the glass panels of the bathroom and wardrobe area.

As a nod to the Harilelas’ roots in the industry, an emphasis on the tactile qualities of textiles and tailoring is found throughout the hotels, with plush Mühldorfer bedding and luxury linen, velvet and wool headboards and sectional sofas.

The Hari Hong Kong is also big on eco-friendly practices — offering filtered water and large-format amenities instead of traditional bottles and disposable miniatures, as well as banning single-use plastic.

Over at Lucciola, chef de cuisine Francesco Gava has designed a menu of traditional Italian dishes that get a modern twist. Think classic dishes all made with the best produce of Piedmont, the chef’s hometown, such as vitello tonnato or burrata Caprese, paired with quirky squid ink grissini sticks — all making for a simple and delicious aperitivo spread.

Ahead of the hotel’s opening through to 31 March, room packages start from HK$1,450 per night, whilst The Hari Suite starts at HK$5,250 per night. Both rates include HK$700 dining credit per stay and late check out until 3pm.