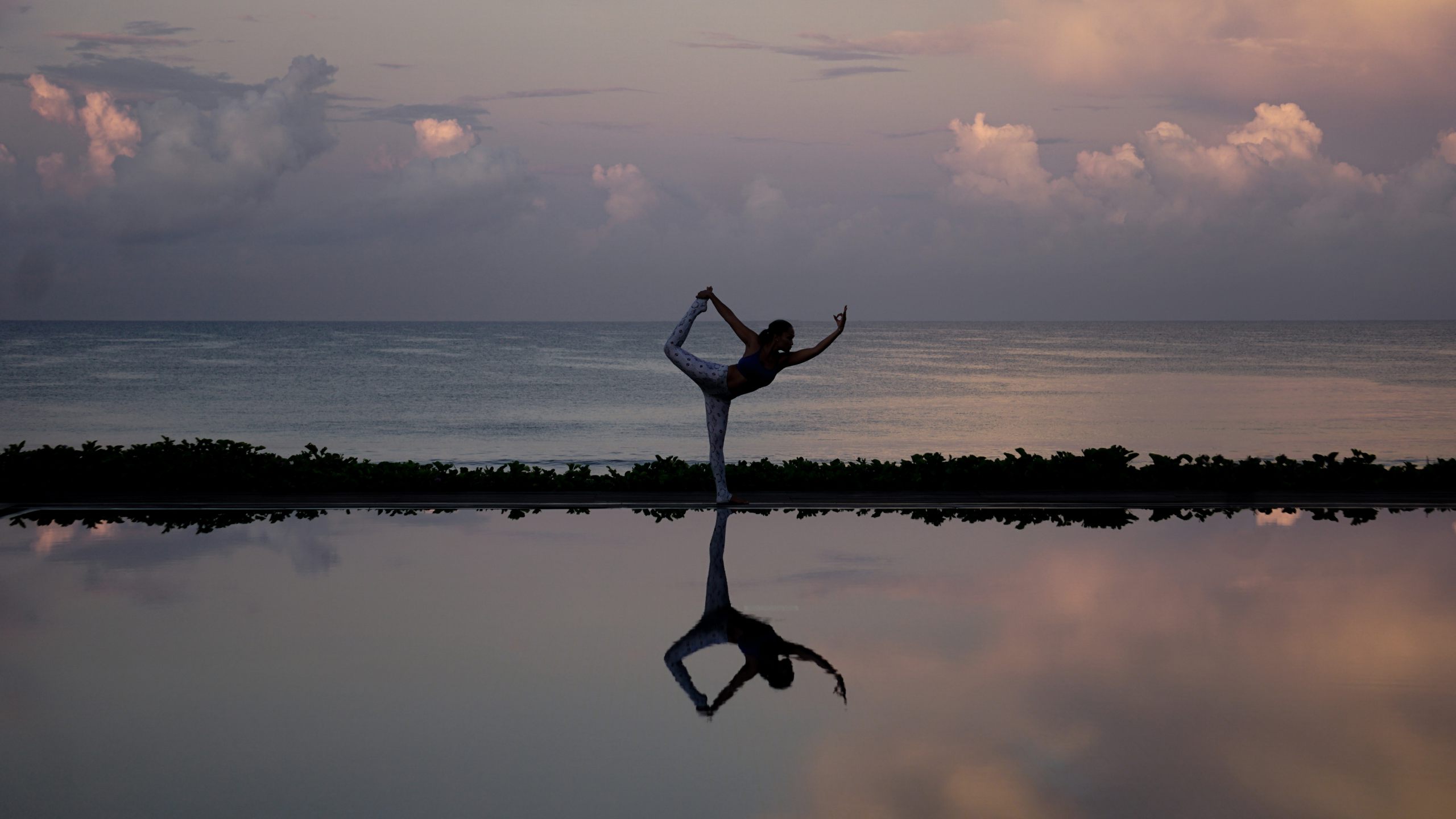 Under the commanding outline of Mount Agung and along a rocky shore facing the straits towards Nusa Penida, Alila Manggis is the first of the hospitality brand’s presence in Bali, quietly celebrating its 25th anniversary this year. Alila Manggis is located in a small East Bali town named Candidasa (pronounced with a “ch”), a roiling hour-and-a-half drive from the airport — far from the party atmosphere of Seminyak, the hippies of Ubud, and the million-dollar weddings and cliffside sunsets of Uluwatu. But it’s here you’ll want to head if you’re seeking a much-needed respite from the lethargy of city living, truly away from all the noise.

It’s here where yogis can practice against a panoramic horizon at Alila Manggis’ brand new Surya Yogashala, an open air yoga shed where you can do real sun salutations to greet the day. It was also here where I had some of the best sleep of my life — with nothing but the murmur of waves lapping against a rocky shore just metres away.

Enroute to Bali as our plane was taking off, my neighbour informed me that literally hours ago, Mount Agung, Bali’s sacred volcano had just erupted. It’s located just under an hour’s drive from Alila Manggis — some even like to hike to the summit. I panicked, wondering if I needed to cancel my booking and stay somewhere convenient in Seminyak instead, but there was nothing I could do once we took off (except binge-watch the first season of ‘Killing Eve’ — highly recommend).

Once arriving, I was relieved to find that locals paid the news no mind; the eruption was nothing but a toot of white steam earlier that morning. Later, I felt it to be some stroke of spiritual serendipity, a symbol if anything of my releasing tensions during my stay. Obviously, this is exactly the type of thing that only comes across one’s mind when lounging idly under a grove of palm trees.

A total of 53 rooms and two suites make up the relatively modest accommodation at Alila Manggis. The sparse grounds give off a boutique atmosphere with well kept lawns, tall coconut trees, a high-ceilinged open air lobby, and a long pebbly shore — the surf is too intense to swim here, unfortunately — with hammocks and armchairs set up to best enjoy the view.

Each room has an exterior entrance and a back door with a patio or balcony facing the inner lawn and pool. Our Superior Queen room was just steps from the ocean — and the Ocean Bar, a chill alfresco lounge that offers light bites and sunset cocktails that go on until the stars come out. The room itself was decorated simply with wood and classy beige stone, with a hint of rustic warmth in the fittings that have aged naturally over time. The amenities gave the impression of going back to basics: You are handed a real room key and carved wooden keychain rather than a keycard or an electronic lock. The small LCD TV was outdated technology — but truth be told, you’ll probably not want to turn it on during your stay. Bottled water was filtered and stored in reusable glass bottles; while pristine white bedsheets called me to indulge in several cat naps through the day.

The only restaurant on-site at Alila Manggis is Seasalt — it also has a branch in town at Alila Seminyak that’s somewhat of a swanky seafood hotspot. It’s an accoladed all-day eatery serving international flavours as well as traditional Balinese dishes. I was never bored of the menu, particularly making sure to get my fill of nutritious fresh juices and Balinese tonics at breakfast.

Whether dining at the restaurant, surrounded by a tranquil moat covered in lotus flowers, or calling for room service (where you can eat on your patio or balcony), meal times were always something to look forward to. I lived for the hearty tempeh curry with wing beans, the bihun goreng (stir-fried glass noodles) with toothsome tiger prawns, and the grilled mahi mahi, fresh-caught from nearby waters — all delicately plated using a mixture of traditional banana leaf presentation and sophisticated saucing.

Before you while away most of the day sunning yourself or dipping in the pool with a fresh coconut, you’ll want to book in for a few yoga classes. Classes are held throughout the week in the mornings and afternoons led by Amy Effendy, an internationally certified yoga teacher trained in several disciplines of yoga, including Moon, Sun and Fire; Tantra Shakti; Nidra; and Kundalini Kriya Yoga. We woke up naturally for an 8am class, trekking just a minute to the Surya Yogashala (‘surya’ means sun in Sanskrit), when the grass was still misty and the sky was still a faint hazy coral hue.

While it was a relatively beginner-friendly class, it was nothing like I’d ever experienced before. Practising yoga amongst the elements helped me to focus on the present: starting from several sun salutations, to having my arms outstretched into ‘warrior two’ pose and pointing towards the rushing waves, to having my balance tested by the sea breeze in ‘tree’ pose.

After a productive morning, the best reward was enjoying a hearty breakfast at Seasalt filled with gem-like eggs, piquant laklak (Balinese rice pancakes), fresh fruit juice and tonics. The next logical thing to do was to simply lounge by the pool until it was time for our mid-morning spa treatments.

Tucked under the shade of a quaint Pandan forest at the corner of the property, the spa treatments take place in curtained thatched huts, where one of the couple’s rooms open up directly over the water. A full spa menu ranges from detoxing facials to shirodara oil treatments; reflexology to traditional Balinese massage — where long strokes of the masseuse’s hands gently melt away each knot, peaking in pressure with every crash of the ocean waves.

A monthly six-day, five-night yoga and wellness retreat is offered at Alila Manggis, combining both physical and mental detoxification with plenty of rest, physical practice and nourishing food and drink. You’ll get to try several styles of yoga classes, as well as meditation and Tai Chi workshops. The price — starting from US$1,490 (approx. HK$11,689) — includes three daily yoga workshops, unlimited healthy food and drink, and Alila Experiences such as tours and water sports (excluding diving), daily spa treatments and more. On that note, we also glimpsed a 48-hour spa ‘buffet’ package — the Spa Junkies Paradise Unlimited — where you can book all the scrubs, facials and massages you can muster at IDR2,500,000 per person (approx. HK$1,378).

Just like the pent-up smoke erupting from the active volcano, after just two days in this far-flung Eastern corner of Bali, I felt my body unwind itself. My clenched shoulders, which are permanently in typing mode, relaxed back down. My sense of urgency and anxiety of needing to constantly occupy my time melted away with every yoga stretch and massage. I caught up on sleep I didn’t know I sorely needed, whether under crisp white sheets or under a sun umbrella — returning to a clean slate before being released back into the concrete jungle.

Suite Staycation: 24 hours in the ‘lodge’ at Asaya Hong Kong