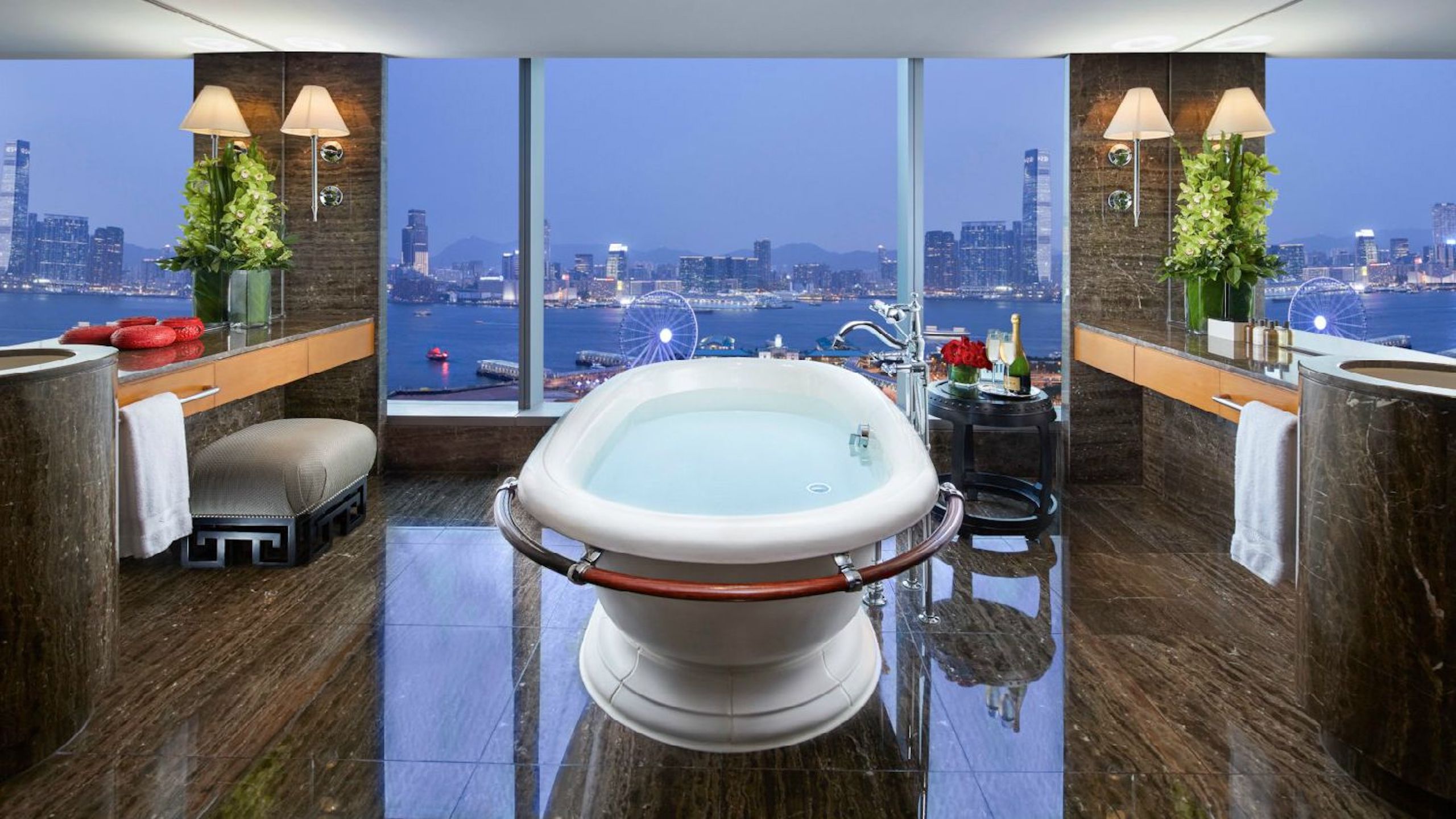 Every Hongkonger knows that life in our crazy, fast-paced city wouldn’t be bearable without the occasional getaway. That’s why we’re bringing you “Suite Staycation“: a monthly review of some of the finest hotel suites in Hong Kong and Macau. Rated upon quality of accommodation, F&B and the perks which we experience — not to mention on pure ‘wow’ factor — our new column brings you in-depth analysis on where to spend your dollars when it comes to taking some well-deserved R&R.

With the exception of a certain Kadoorie-helmed institution across the harbour, it’s a fact — not open for discussion — that the Mandarin Oriental has, and will likely always be, the hotel that best epitomises luxury hospitality in Hong Kong. Impossibly glam yet possessing something for everyone, Mandarin Oriental’s flagship property isn’t so much a hotel as it is one of the city’s best-trod social hubs: the kind of place where you can happily brush shoulders with celebrities one moment, and be swapping yumcha recommendations with veteran doormen the next. No matter whether it’s the service, location, rooms, dining or beauty & spa treatments, there isn’t a single vector in which the Mandarin Oriental isn’t firing on all cylinders (there’s a reason that, even in 2019, the property is a yardstick by which all other ‘luxury hotel’ openings in the city are measured, and often found wanting).

Naturally, the legendary Mandarin Oriental hospitality makes this hotel the ideal candidate for a truly decadent staycation. Beyond the obvious draw cards — seven restaurants, three bars, an award-winning spa, state-of-the-art fitness facilities — just the act of staying here comes replete with its own sense of magic. When you consider the property is turning 56 this year, that’s no small feat.

Travel
Suite Staycation: A “Central Staycation” at The Landmark Mandarin Oriental
Paint a picture for us: whereabouts is the hotel? How’d it strike you upon arrival? 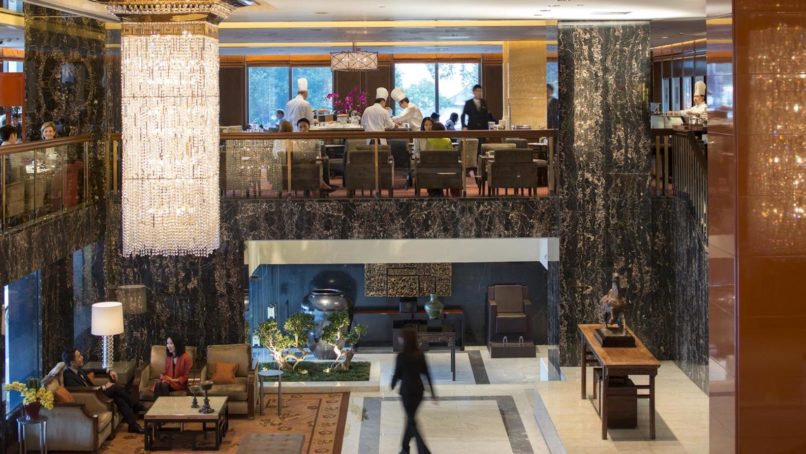 The Mandarin Oriental has always been at the figurative and literal heart of Hong Kong. A series of elevated walkways provide the property with fantastic accessibility, connecting it to other premier addresses throughout Central — Prince’s Building, Alexandra House, and the Landmark commercial complex among them. MTR access is similarly convenient, with an exit located just outside the hotel.
Despite 56 years in business, the lobby remains undiminished in its capacity to evoke excitement. Guests arriving via the main driveway experience the full magic: gliding into a (surprisingly cosy) lobby clad in onyx marble, intricate chandeliers and traditional Chinese art. The ambience is decidedly old school, though it’s impossible to deny just how stylishly the hotel wears its age.

Can we expect staff to roll out the welcome wagon?

Yes and no. At reception, I was greeted with a hot towel and cold tea — lifesavers from the unseasonably bad humidity outside — whereas the guest next to me (evidently travelling for business) was ushered through check-in at terminal velocity. Ultimately, context is everything, and at the Mandarin Oriental, staff are incredibly adept at perceiving the ‘why’ of your visit and calibrating their service accordingly.

Good to know. So how was your room?

Thanks to a well-timed Fans of M.O. request, I was fortunate enough to be upgraded to one of the hotel’s 67 suites overlooking the harbour and nearby Statue Square. The floorplan for many of these rooms is slightly atypical, owing to the original building’s age and the top-to-bottom renovation it underwent back in 2005. Unlike most contemporary suites, the bedroom is wedged between the bathing and living areas, functioning as a sort of conduit between the two. It’s not a fatal design flaw, but worth being mindful of if you insist upon waking up with a view.

Fortunately, visibility in the other areas of the suite is excellent. In the bathroom — a heartstopping vision of umber marble, porcelain and wood — guests can survey Central Harbourfront from the comfort of an oversized tub; whereas window sills in the living room have been extended for the express purpose of people watching (the binoculars certainly help).
In typical Mandarin Oriental fashion, the amenities — including a Nespresso machine, Jo Malone toiletries and Rowenta steamer — are all undeniably first-rate.

Sounds comfy. Should we settle in and order room service?

If you want to go the in-room dining route, the Hainanese chicken rice is something of a must-have, although you’d be remiss for not freshening up and exploring. No less than 10 F&B options are available under one roof, covering all of the usual culinary bases (Cantonese, fine French, live bar, etc.).

Gourmands regularly tout the fact that Mandarin Oriental, Hong Kong is home to the world’s only Krug Room, though for a spot of classic British fare — and a history lesson to boot — I’m inclined to recommend The Chinnery. The latter was one of the few F&B venues to escape the 2005 renovation largely unchanged, and still serves a hermetically sealed menu befitting the encyclopedic whisky library that looms overhead. If you’re dining with company, Mandarin Grill + Bar presents an airy, compelling alternative. Grilled meat and seafood is the specialty inside Terence Conran’s handsome dining room, ranging from modernist fare (amadai served alongside ‘textures’ of baked potato) to time-honoured classics such as sole meunière.

So far so good. Anything you’d like to see improved?

As one of Mandarin Oriental Hotel Group’s most prestigious and active properties in the region, it’s somewhat surprising that the little value-adds commonly offered by the brand’s competitors didn’t make an appearance. There is no formal executive lounge to speak of and complimentary garment pressing — a standard trope at world-class luxury hotels — isn’t offered. (As a ‘Fans of M.O.’ member, you can get around the latter hiccup by using one of your ‘two per stay’ privileges.) Again, these aren’t grievous missteps, but at rates exceeding HK$7,000 a night, it’s the little details that stick in the mind. A bit of both. The peerless location and alluring range of dining options mean that on any given day you’re just as likely to see families and leisure travellers as you are your garden-variety banker.

Any members of staff you’d like to single out for MVP status?

For those contemplating reservations at Mandarin Grill + Bar, I highly recommend requesting a table inside management trainee Geraint Friswell’s sphere of influence. The Claridge’s veteran is a consummate example of how the Mandarin Oriental has won its reputation for service excellence over the years: bringing brio, discretion and attentiveness to a job that’s so often dismissed as ‘just waiting tables’.

Can you tell us what the high point of your stay was?

The vaunted Mandarin Spa, conferred 5-star status by Forbes for the last nine years, definitely lives up to its reputation. Trust me: You may be prepared for plush rooms, Michelin-starred dining and pampering service, but the Mandarin Spa takes all the consummate strengths of the MO brand and drives them to a new high.

Consistent with Mandarin Oriental’s group-wide spa programme, the focus at the Mandarin Spa is on treatments developed using the aid of modern technology and TCM. Among its signature offerings, the spa’s Oriental Qi massage stands out as particularly satisfying. Guests undergo a two-hour deep tissue massage that is performed using essential oils; upon completion, they’re advised as to how they can re-balance their body at home, in accordance with the classic ‘Five Element’ framework.

So in a nutshell: Worth the splurge?

Absolutely. Despite a towering cultural legacy — and its all-too-understandable ability to charm guests senseless — the Mandarin Oriental remains an approachable, exciting and impeccable part of Hong Kong’s luxury-hotel landscape. That it’s so centrally located and full to bursting with fantastic dining options (any one of which is capable of justifying a visit on its own) is simply the icing on the cake.

Travel Mandarin Oriental Mandarin Oriental Hong Kong Hotel Reviews suite staycation Hotels & Resorts
Randy Lai
Editor
Having worked in the Australian digital media landscape for over 5 years, Randy has extensive experience in men's specialist categories such as classic clothing, watches and spirits. He is partial to mid-century chronographs and a nice chianti.
Style Watches Drinks Tailoring Travel
Sign up for our newsletters to have the latest stories delivered straight to your inbox every week.