The 10 best hotels to stay at in Singapore

Whether you’re travelling for a dose of culture and art, hunting down delicious local eats, or seeking a restful resort away from the buzz of the city, Singapore’s attractions are vast and varied, offering something for every type of traveller. The country’s central location makes it an easy destination to get to, while the compact size allows you to cover good ground even with just a weekend to spare — whether you’re browsing boutique stores on Orchard Road or admiring the flora and fauna at Gardens by the Bay. The island-nation’s small size and ease of transport also means it’s hard to go wrong location-wise when you’re picking a home base.

While you may find some of the best meals in Singapore for no more than a few dollars, when it comes to accommodation, the high-end hotels roll out the red carpet in terms of five-star amenities and comforts. From beautifully restored heritage buildings to modern sky rises shaping the skyline — we’ve narrowed down the lodgings offering the best of Singapore’s hospitality, F&B and leisure experiences all under one roof. Hunt down these top 10 hotels on your next visit to The Lion City. 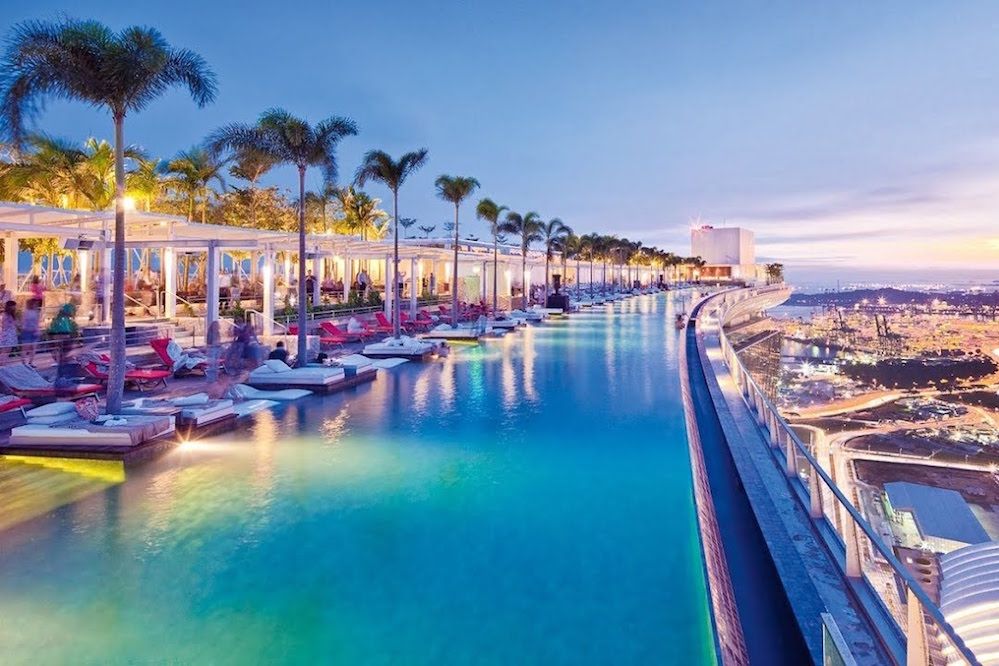 Marina Bay Sands is undoubtedly the most recognisable landmark in Singapore, home to the world’s largest infinity pool and a surplus of world-class dining and shopping. If you can book yourself into one of the rooms here you won’t be disappointed, with three 55-storey towers comprising over 2,000 luxury guest rooms and suites. In addition to the spectacular views — widely regarded as the best in the city — the hotel offers endless scope for entertainment, from swimming laps in the 150-metre Sky Park pool (open only to hotel guests), to shopping the massive retail promenade, partying late-night at the city’s newest hotspot Marquee, and savouring sensational dining.

One of the best ways to soak in the experience at the Sands is to book yourself an early dinner reservation at LAVO Italian Restaurant & Rooftop Bar, complete with a wraparound terrace offering a birds-eye view of the bay. The rooftop eatery and lounge offers solid contemporary Italian dining, from homey wood-fired pizzas to hearty pastas and an extensive raw bar. Grab a glass of wine and watch the sun dip below the horizon, then stay for the newly launched LAVO Saturday Soirees, when the volume gets cranked up with live music performances and a well-heeled party set a la Crazy Rich Asians. 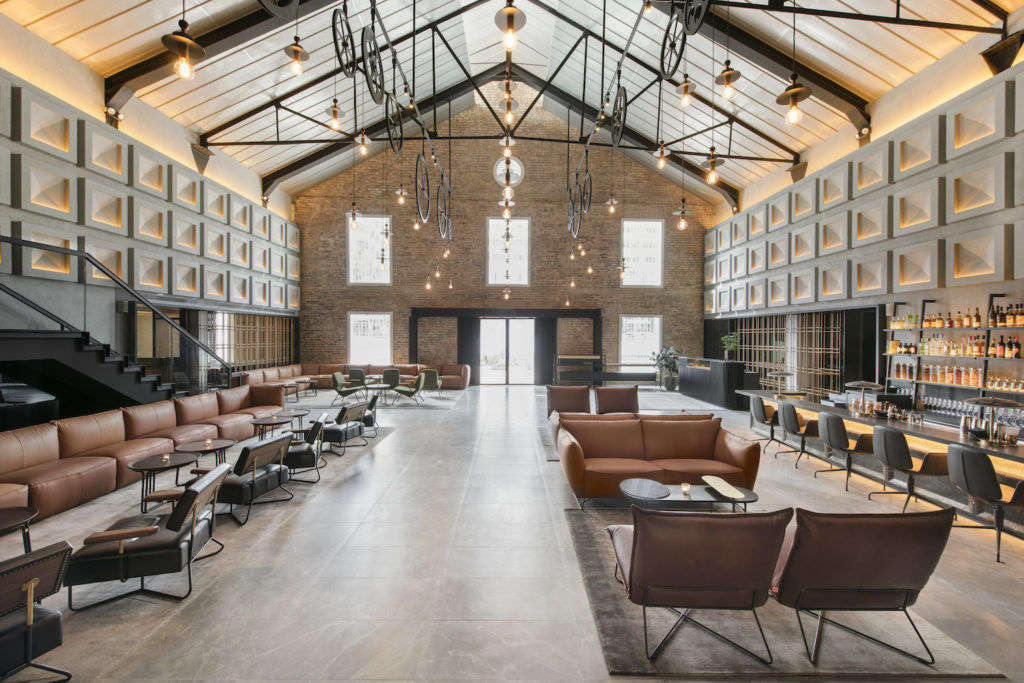 There’s nothing more revitalising after a string of stays in big-name hotel chains than a restful weekend away at a well-appointed boutique hotel. The Warehouse Hotel on the bank of the Singapore River is one such property: Meticulously restored from a former bank, the hotel nails the industrial-chic setting, starting with the stunning high-ceilinged lobby lined with hanging pendant lights and pulleys. The boutique hotel boasts just 37 rooms outfitted in a mod palette of concrete and copper, with guest rooms offering space to spare — so you can sprawl out comfortably on the king-sized pillow-top beds or sit by the wide-framed windows soaking up views of the river. Other in-room amenities include state-of-the-art Bang & Olufsen speakers, a smart TV and granite vanities with rain showers.

Elsewhere in the hotel, enjoy five-star comforts such as a glass-walled infinity pool on the roof, well-crafted cocktails at the stylish lobby bar, and local cuisine at ground-floor restaurant, Po. Dinner here includes riffs on local favourites such as Peranakan-style charcoal-grilled chicken and Wagyu cheek rendang. One of our favourite secrets of the hotel is the reading library adjacent to the lobby, offering a hidden sanctuary for those seeking a quiet evening in. 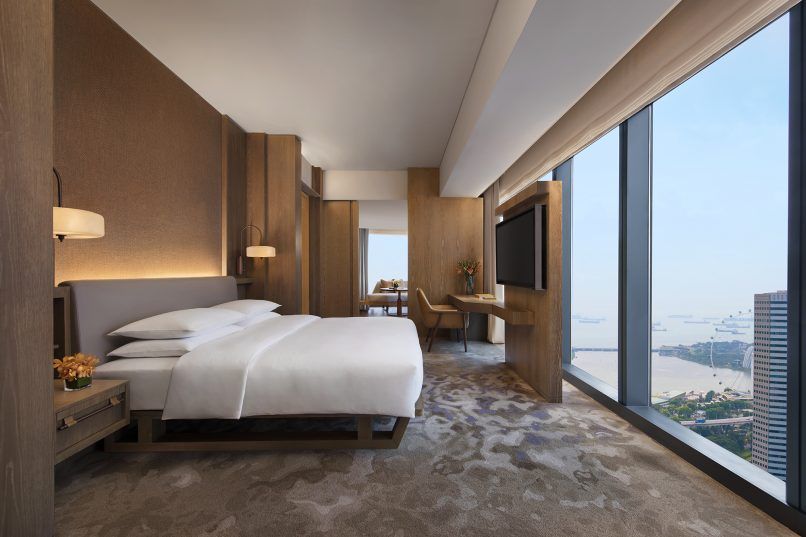 Occupying the top 15 floors of the Duo Tower in Singapore’s Bugis district, the Andaz is smack dab in the midst of major dining and shopping hubs. Fans of the Andaz brand will find the familiar touch points of the brand present throughout the hotel, from the absence of check-in counters, to the natural-leaning materials palette and a focus on high-tech amenities. Interiors have been designed by none other than award-winning designer André Fu, with elements nodding to the heritage of the city in details such as guest room doors resembling traditional shophouses.

Step outside to explore the shopping and eating in Bugis and nearby Little India, or make yourself at home within one of Andaz’ many F&B spaces: starting with the Sunroom, where free wine and beer is offered every night from 5–7pm. Alley 0n 25 offers all-day dining including a gluttonous breakfast buffet spread, while sumptuous barbecued meats await at Smoke & Pepper. Don’t miss a trip to Mr. Stork on the 39th floor rooftop, where inventive cocktails are served with a side of 360-degree views. 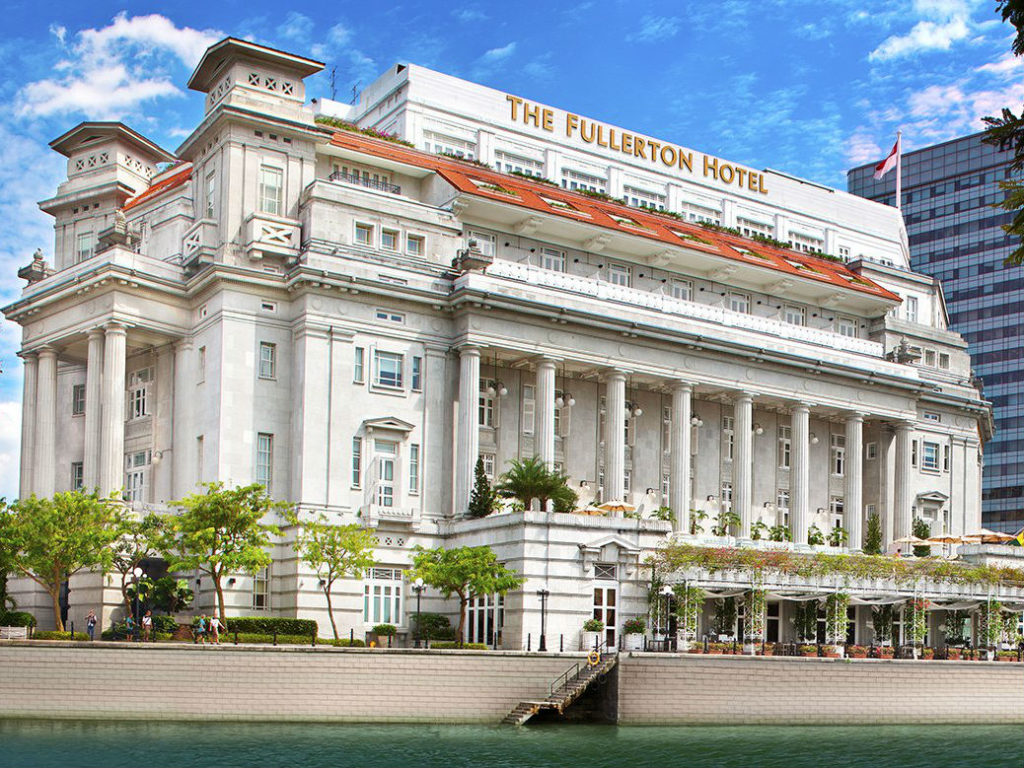 There are few hotels in Singapore as iconic as The Fullerton, standing as a mighty beacon of hospitality on the waterfront. With a storied past, the current Fullerton Building was established in 1928, and housed the General Post Office and the Singapore Club before being converted into the posh Fullerton Hotel in 2001. The hotel — designated as Singapore’s 71st National Monument — channels the building’s historic past with a pervading air of exclusivity, from the high ceilings to Italian marble floors and grand Doric columns.

Step behind the neoclassical facade and into the large atrium complete with coffered ceilings and tropical planters. At the lobby museum, you can learn more about the building’s revered history, or head straight to the many gastronomic hotspots including riverside views at Town, authentic Cantonese food at Jade, and date-night dining at the Italian-themed Lighthouse Restaurant & Rooftop Bar. The convenient hotel sits in proximity to myriad landmark attractions, including the Victoria Theatre and the National Gallery. 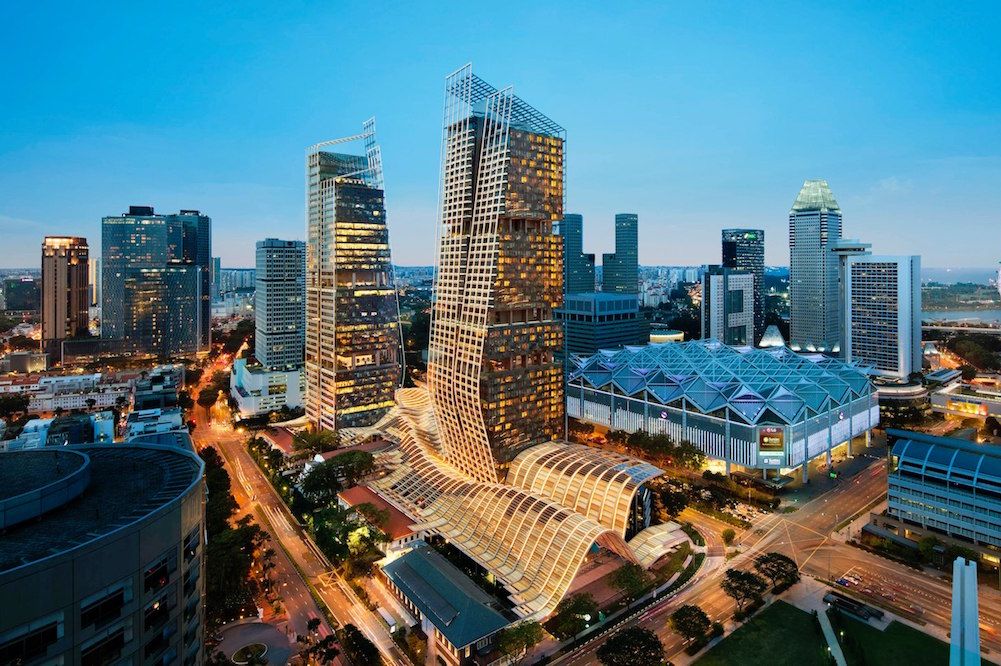 Discover five-star comforts in the heart of the city at JW Marriott Hotel Singapore South Beach, a visually striking hotel by renowned French designer, Philippe Stark. His signature futuristic design philosophy is ever-present throughout the hotel, from the undulating facade to the shiny palette of silver and metallics. Striking a balance between the building’s heritage past (formerly a military camp) and a contemporary aesthetic, the JW Marriott offers both convenience and comfort as a base from which to explore the city. Delight in the elegant guest rooms complete with Philippe Stark-designed chrome rocking chairs, tempt your palate at Japanese restaurant Akira Back or the all-day Beach Road Kitchen, and end with a nightcap at The NCO Club, home to five themed concepts including a jazz and champagne bar. 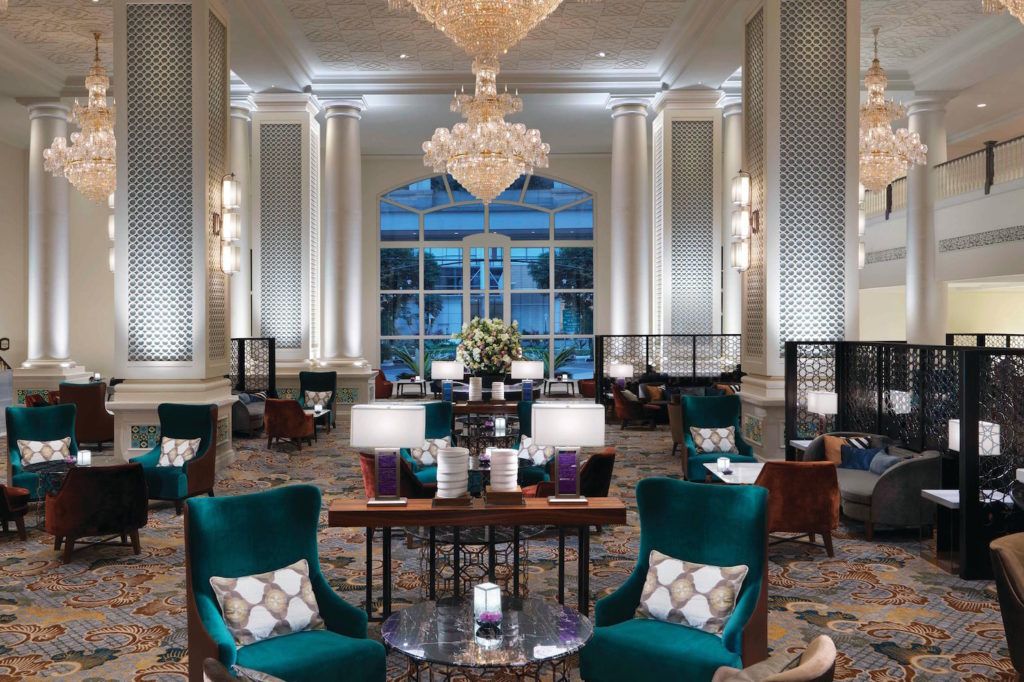 Located in Singapore’s Bugis district, the InterContinental Singapore may not have the same waterfront panoramas as its Hong Kong counterpart, but the hotel is a visual treat in itself, featuring a series of Straits Chinese-inspired spaces nodding to the heritage of the area. Design aficionados will want to soak in the elegant louvred ceilings and timber floorings, duck egg blue panelling and wooden shutters overlooking the bustling streets below.

Step back in time in the Heritage Wing of the hotel, and find relaxation at the end of the day in the Peranakan-inspired guest rooms, with artisanal, ornate furnishings fused with contemporary design. Those seeking a quiet moment away from the hustle and bustle of the city will want to retreat to the Yoga Quiet Room in the 24-hour fitness centre, or grab a nightcap at immersive cocktail destination, Idlewild. For Sunday brunch, you won’t be disappointed with the Nordic-inspired spread at flagship restaurant, Ash & Elm. 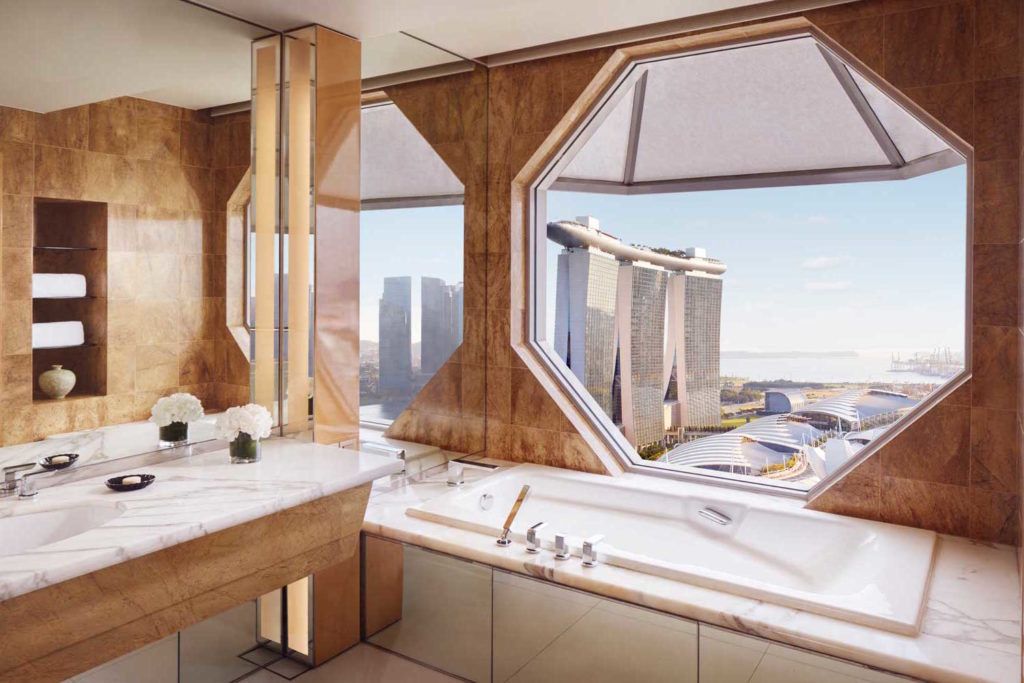 The Ritz-Carlton’s signature five-star service comes in spades at the brand’s flagship property in The Lion City. Set in Marina Bay just a stone’s throw away from popular attractions and tourist hubs, the luxury hotel offers elegant accommodations with stunning views of the cityscape. One notable highlight is the 4,000-strong art collection with works from the likes of Andy Warhol and Dale Chihuly, while a strong F&B portfolio includes the Michelin-starred Summer Pavilion and international dining at Colony. Feet feeling sore after a day of traversing the city? Retire to The Ritz-Carlton Spa — one of the only La Mer partnership spas in Asia Pacific — and spoil yourself with a hot lapis stone or bamboo massage. 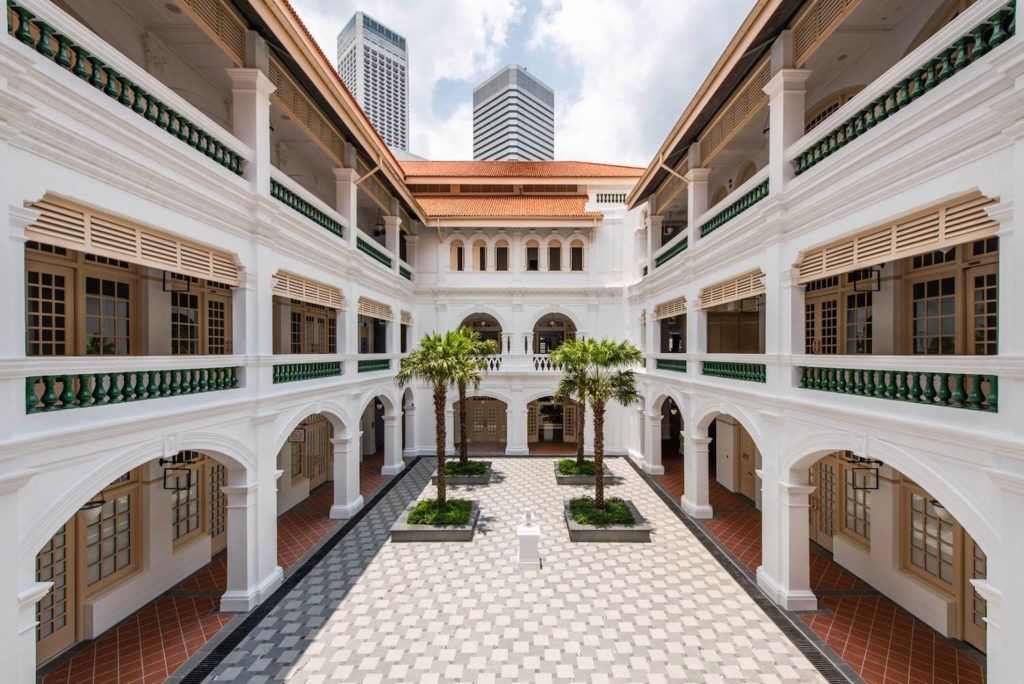 Newly restored this year, the recently reopened Raffles Hotel — first founded in 1887 and designated a national monument in 1987 — celebrates the iconic history of the hotel while unveiling some necessary upgrades. Expect to find the old-world charm and service of the hotel intact, with enhancements including a host of new bars, restaurants and social areas including a renovated rooftop pool and expansive lawn ideal for weddings. An increased guest room count of 115 allows more travellers to experience the historic property, from the lobby gallery filled with archive pictures to a trip to the legendary Long Bar, where the gin-based Singapore Sling was first invented. The F&B programme has also been powered up by world-famous celebrity chefs, from a new grill house by Alain Ducasse, to Michelin-decorated chef Anne-Sophie Pic’s new restaurant La Dame de Pic. 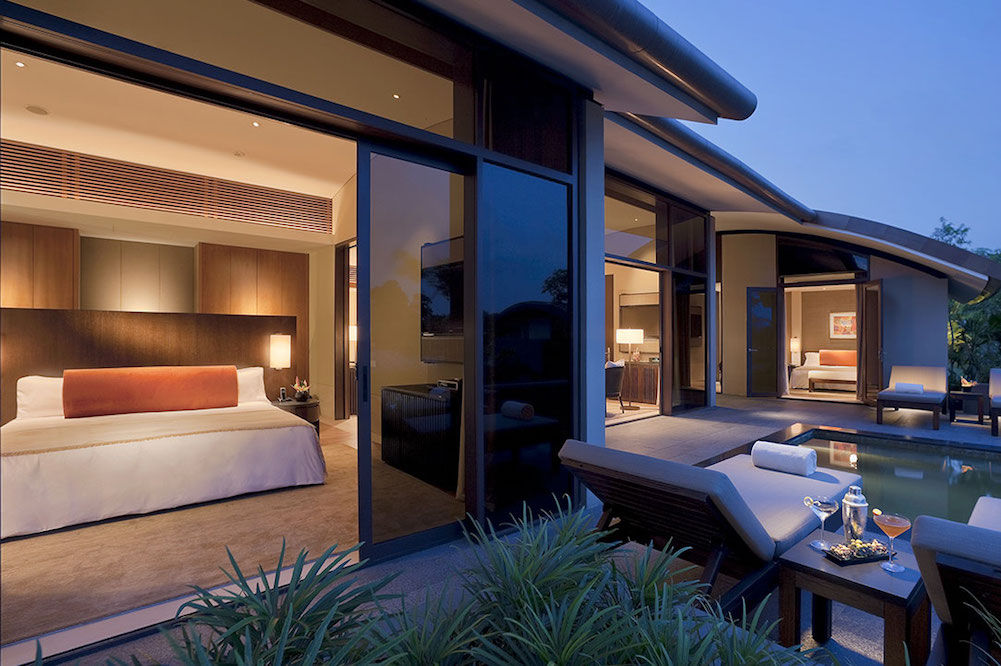 If you’re headed for the family-friendly Sentosa Island for the weekend, there’s no better place to bunker down than the Capella Singapore, encompassing 30 lush acres of hotel grounds with plenty of green spaces. Designed by Foster + Partners, the Capella is yet another Singaporean hotel that effortlessly blends an old-world colonial veneer with contemporary luxuries, all while offering a distinct resort vibe that’s innate to Sentosa Island. The resort of choice for locals seeking a relaxing staycation, Capella has it all: personalised hospitality, world-class food and drink, and recreational options from tennis courts to reading libraries — all set against the backdrop of the ocean for a slice of paradise. 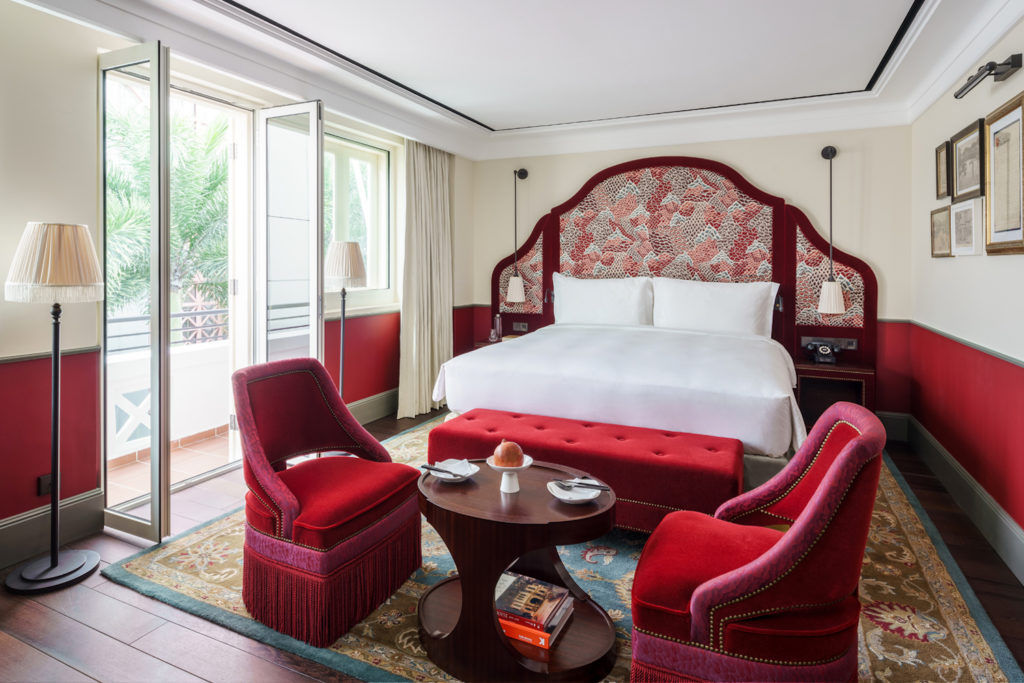 Sibling to Six Senses Duxton, the new Six Senses Maxwell takes European luxury to new heights, with trademark flourishes from renowned interior designer Jacques Garcia. The design lover’s playground is replete with unique accents — including a heavy dose of Chinoiserie — that pay homage to the local heritage shop houses that line the bustling Chinatown nearby. A total of 138 guest rooms and suites feature a handsome blend of modern amenities and sustainably sourced handcrafted furniture, from dark wood cabinetry to beautifully fashioned rugs. Epicureans will find joy in the hotel’s array of restaurants and bars, or simply cross the street for a taste of Singapore’s famous chicken rice at the popular Maxwell Food Centre. At the end of the day, retire to the Six Senses spa, where you can choose from traditional Chinese medicine treatments or relaxing seaweed and sea salt scrubs.

Take a relaxing ‘beer bath’ at this dreamy Icelandic spa