These are some of the coolest places to stay in Europe

Thinking of jet-setting off to Europe to see the bewitching Northern Lights or soak in the sights of Amsterdam? Taking in centuries-old history and culture in some of the most beautiful locations in the world is wonderful, but don’t forget that it can lose a bit of its magic if you stay at a generic chain hotel. A much better idea is to make your lodging just as memorable as the rest of your trip. We’ve rounded up some of the most stunning and unusual accommodations in Europe to ensure that your time spent indoors is just as unforgettable as the hours spent discovering the sights and sounds of the city.

Stay in a Hogwarts-like castle at… With its flame-lit hallways, turrets and towers, the Neo-Gothic inspired Conservatorium hotel is arguably one of the most beautiful buildings in Amsterdam. The original wooden beams and structural designs have been preserved from the hotel’s storied history, first built as the Rijkspostspaar bank in the late 19th century, and later converted to a music conservatory in 1978. In 2008, the building was redeveloped into a luxury hotel under the direction of Milan-based designer Pierre Lissoni, whose main aim was to preserve the ingrained history of the structure.

The result is a magnificent reincarnation of a landmark that plays to both its past and its future. The most stunning facet of the hotel is its grand, airy atrium, all floor-to-ceiling glass panels on one side to flood the lobby with plenty of natural light. Grab a bite at the Brasserie & Lounge or a drink at Tunes Bar — with its impressive variety of gins — as you soak in the history and culture around you, before stepping out into the surrounding Museumplein district for an eye-opening visit to the Van Gogh Museum or Rijksmuseum.

From HK$2,568 per night, conservatoriumhotel.com.

Explore an underground cave at… 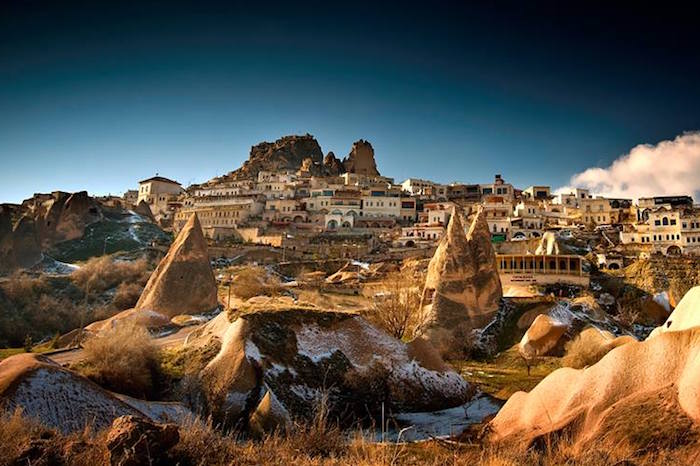 If the iconic image of hundreds of colourful hot air balloons suspended in mid-air above the stark Anatolian plains isn’t enough to attract you to Cappadocia in Turkey, the idea of living like a modern-day Flintstone in a cave should do the trick. With its network of underground cities which at one point housed up to 20,000 people, Cappadocia is a fascinating geological region to discover, and Cappadocia Cave Resort is one of the best bases to do it from.

This luxury resort combines the best of old and new worlds, boasting 40 rooms and suites, a world-class spa, and a heated indoor and outdoor pool — all nestled amongst Cappadocia’s rocky lunar landscape with breathtaking panoramas of the region. After you’ve settled into your underground abode complete with hydro-massage shower, plasma TV and a jacuzzi, pay a visit to the resort’s concierge to fill up your days with pottery workshops, rug shopping and a hot air balloon flight to catch the sunrise.

Snuggle inside an igloo at…

It doesn’t get more magical than admiring the majestic Northern Lights from the privacy and seclusion of your own personal glass-domed igloo. The ‘aurora borealis’ is visible from the end of August through April, and watching the alluring green lights flickering and carving whimsical patterns across the sky is one of those once-in-a-lifetime experiences — made even better when you’re snuggled up in bed instead of freezing your toes off in the arctic temperatures.

Kakslauttanen Arctic Resort is one of those places that’s hard to imagine in your everyday existence, with its string of turtle-shaped glass domes looking out on the majestic green and pink-hued sky above. Cuddle up with your loved one in the cosy two-person igloo and watch as the lights dance across the sky, reflecting the white-capped trees below. When the night lights fade, it’s easy to keep entertained during the day with husky-sledding, snowmobiling and reindeer safaris across the barren winter landscape.

Live high up in the trees at… 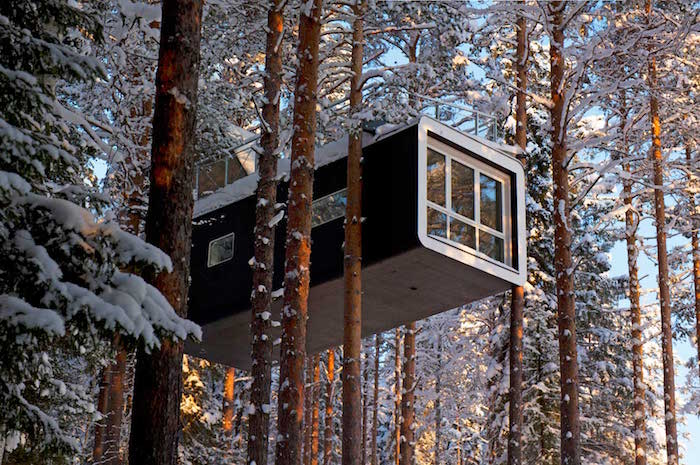 Many of us haven’t been in a tree house since we were children, but one look at the enchanted Treehotel in Harads in northern Sweden, and it’s easy to step back to our childhood realms of fantasy and fiction. Conjure up the woodland creatures of your youth as you’re perched up in one of the gravity-defying “treerooms,” each designed by different Scandinavian architects. As expected, the whole facility is incredibly eco-conscious, with the low-impact free-standing treerooms suspended 13 to 20 feet off the ground amongst the natural forest (no trees were cut down during the construction), surrounded by stretches of forest in all directions.

With six individually designed treerooms and more in the works, where you stay depends boils down to your personal preference: The “Mirrorcube” is the most modern in appearance, built on an aluminium frame with glass walls that render a camouflage effect in certain lights; while the UFO panders to sci-fi enthusiasts with its bird’s nest shape built from durable composite material. Other possibilities include “The Cabin,” featuring its own outdoor deck; and “Dragonfly,” the latest and largest of the group which functions both as a conference space and a private suite.

Sleep in an automobile at… When in Stuttgart — the birthplace of the automobile — it only makes sense to sleep in a car-themed hotel. The V8 Hotel is a dream for any automobile enthusiast, with 10 automotive-themed rooms covering everything from classic cars to sporty young timers. Kids can make a pit-stop in the Racing Room, with its Formula 1 memorabilia and victory podium, while parents settle into the Nostalgia Room, with a vintage car bed and old scrap metal art pieces intended to evoke memories of the past.

Feed your knowledge and enthusiasm at Motorworld, the adjacent trade hall which is dedicated to every aspect of the motoring world, from car shows to displaying rare vintage automobiles. Nearby, you can journey through 125 years of automotive history at the Mercedes-Benz Museum, or uncover the history of one of the most exclusive car manufacturers in the world at the Porsche Museum. True car fanatics should consider staying in the Mercedes Suite, which spans over four Mercedes-Benz-themed floors and includes your own private rooftop terrace looking out on Motorworld.

Travel Hotels Turkey Scandinavian Europe Amsterdam Treehotel Conservatorium Sweden Finland northern lights aurora borealis kakslauttanen arctic resort cappadocia cave resort
Leslie Yeh
Editor in Chief
Having worked as a lifestyle editor for almost 10 years, Leslie is thrilled to be writing about the topic she loves most: wining and dining. When she's not out pounding the pavement for the latest new restaurant opening or tracking food trends, Leslie can be found at home whipping up a plate of rigatoni vodka and binge-watching Netflix with a glass of Sauvignon Blanc in hand.
Dining Restaurants Food Trends Drinks Travel

Suite Staycation: 24 hours in the ‘lodge’ at Asaya Hong Kong