Edson Arantes do Nascimento, better known to the world as Pelé, is no more. The Brazilian football great died on 29 December. He was 82. Several prominent footballers, world leaders and football clubs paid tributes to Pelé following his death.

Nicknamed by his admirers as O Rei (The King), Pelé breathed his last at the Albert Einstein hospital in São Paulo, where he had been admitted for a re-evaluation of his colon cancer treatment on 29 November. The hospital said that he died of multiple organ failure as a result of the cancer.

Members of his family, including daughter Kely Nascimento and son Edinho, spent Christmas by his side at the hospital.

Nascimento posted a picture of the family on Instagram showing their hands holding that of Pelé’s.

“Everything we are is thanks to you. We love you infinitely. Rest in peace,” she wrote in the caption of the picture.

Reports say that Pelé will be buried in Santos, his hometown and where his career began, following a funeral planned for 2 and 3 January 2023. His casket will be carried through the streets of the coastal city, where hundreds of thousands are expected to witness his last journey. 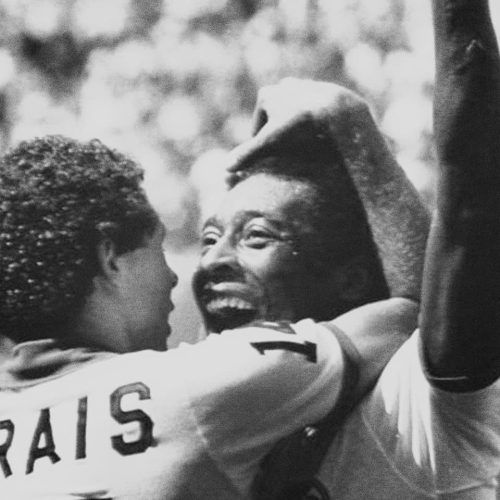 Tributes poured in from the footballing world and beyond. Leading them was Portuguese icon Cristiano Ronaldo, who shared a picture of him with Pelé with his 525 million followers.

“My deep condolences to all of Brazil, and in particular to the family of Edson Arantes do Nascimento. A mere ‘goodbye’ to the eternal King Pelé will never be enough to express the pain that the entire football world is currently embracing. An inspiration to so many millions, a reference yesterday, today and forever…Rest in peace King Pelé,” he wrote.

“The king of football has left us but his legacy will never be forgotten,” wrote Kylian Mbappé.

The king of football has left us but his legacy will never be forgotten.
RIP KING 💔👑… pic.twitter.com/F55PrcM2Ud

Neymar Jr., who is seen as Brazil’s greatest active footballer, took to Instagram to post his tribute.

“Before Pelé, 10 was just a number. I’ve read this phrase somewhere, at some point in my life. But this sentence, beautiful, is incomplete. I would say before Pelé football was just a sport. Pelé has changed it all. He turned football into art, into entertainment He gave voice to the poor, to the blacks and especially: He gave visibility to Brazil. Soccer and Brazil have raised their status thanks to the King! He’s gone but his magic remains. Pelé is FOREVER!!” wrote Neymar, with pictures showing him in happier times with The King.

“Pele left us today. He went to make a table in heaven with Coutinho, his great partner at Santos. He now has the company of so many eternal stars: Didi, Garrincha, Nilton Santos, Sócrates, Maradona… He left a certainty: there had never been a number 10 like him. Thank you, Pele,” Lula concluded in his tribute in which he recollected his memories of actually watching the magician of football play.

Former US president Barack Obama and current leader President Joe Biden were also among those who paid their tributes to the Brazilian icon.

“Pelé was one of the greatest to ever play the beautiful game. And as one of the most recognizable athletes in the world, he understood the power of sports to bring people together. Our thoughts are with his family and everyone who loved and admired him,” Obama wrote.

Pelé was one of the greatest to ever play the beautiful game. And as one of the most recognizable athletes in the world, he understood the power of sports to bring people together. Our thoughts are with his family and everyone who loved and admired him. pic.twitter.com/urGRDePaPv

“For a sport that brings the world together like no other, Pelé’s rise from humble beginnings to soccer legend is a story of what is possible. Today, Jill and I’s thoughts are with his family and all those who loved him,” Biden shared on Twitter.

For a sport that brings the world together like no other, Pelé’s rise from humble beginnings to soccer legend is a story of what is possible.

Today, Jill and I’s thoughts are with his family and all those who loved him. pic.twitter.com/EkDDkqQgLo

The statue of Christ the Redeemer in Rio de Janeiro as well as the Wembley Stadium in London were lit with the colors of the Brazilian national flag in tribute to Pelé.

His club, Santos, changed its profile picture across social media to a crown and the word “Eterno”, as a mark of respect for O Rei.

Pelé and his accomplishments

Universally hailed as the greatest icon in the world of football, Pelé set numerous records in his outstanding career of 21 years from 1956 to 1977. Many of these records are unmatched to this day.

The only footballer in the world to have won three FIFA World Cups, Pelé’s records include the distinction of being the highest goal-scorer for his club, Santos, and also the all-time top goalscorer for Brazil national team.

He was made an honorary Knight Commander of the Order of the British Empire in 1997 and named the Player of the Century by FIFA in 2000, alongside Argentine great Diego Maradona.

Hong Kong government to give away 500,000 flight tickets to attract tourists