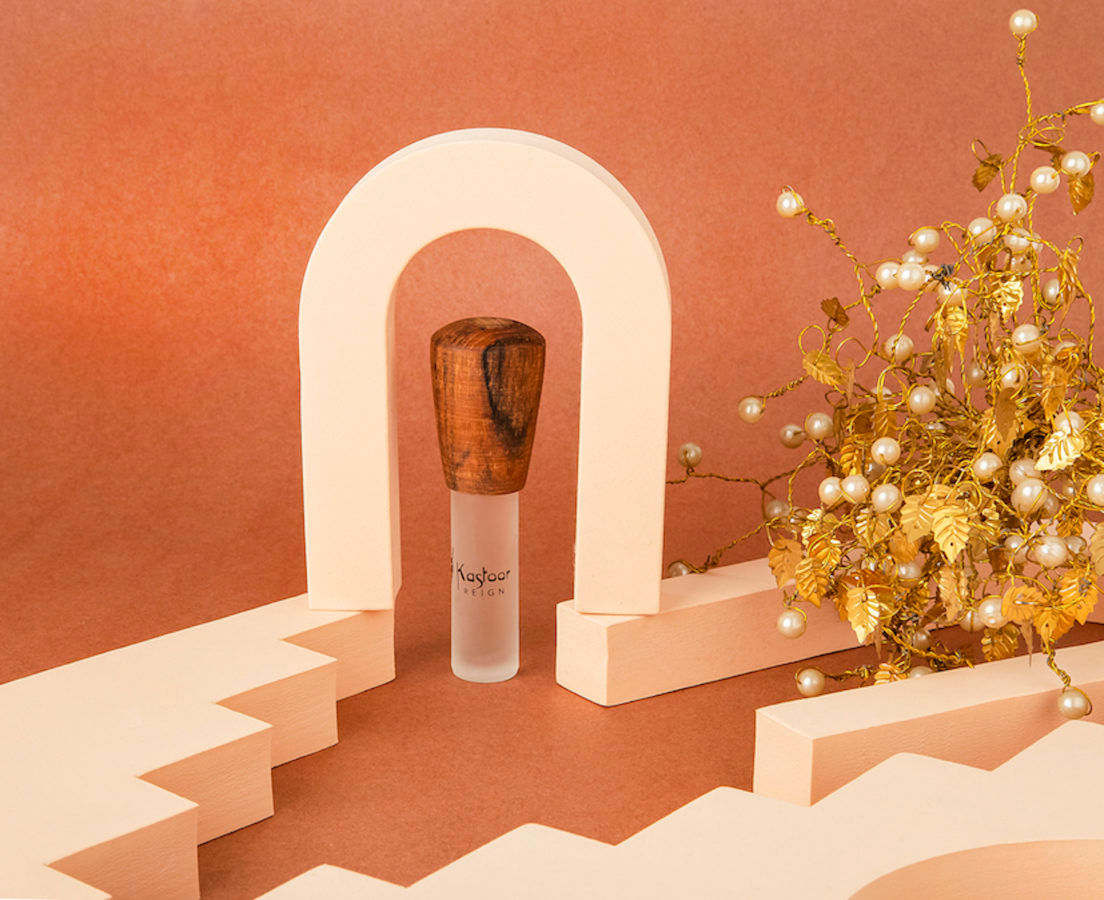 Ittars are a heady fragrance to wear. Yet the lingering homegrown fragrance is one that has both historical relevance and modern appeal. We talk to Esha Tiwari founder at House of Kastoor about bringing back this ancient art.

The history of perfume in India dates back to the 6th century with mentions of fragrance in the olden Indian epics and granths. From the harems of kings dousing themselves in itra’s to the perfume-making in Ujjain, it’s a craft that boasts of a rich and vibrant past. So why do we then turn to modern perfumes over indigenous ones? In a bid to answer and change this equation, Esha Tiwari founded House of Kastoor. 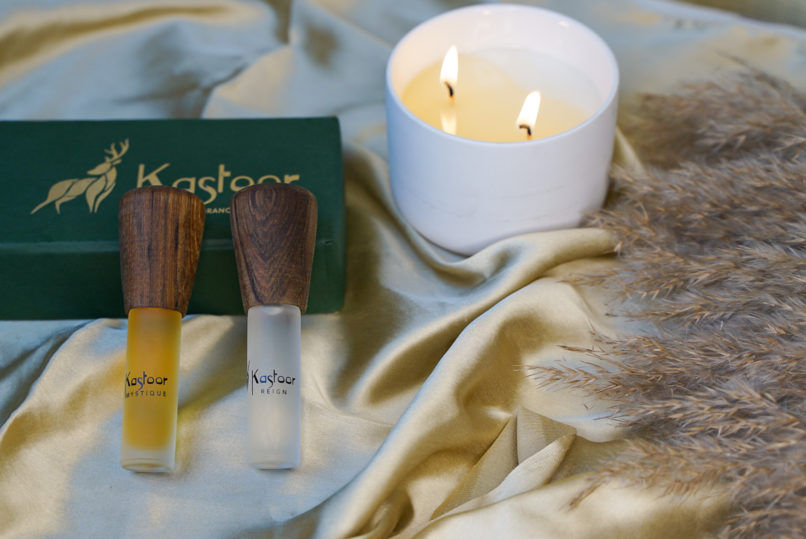 “The making of ittars is not just any process but an art. However, somewhere in the race of chasing foreign notes, ittars lost their supremacy,” points out Tiwari. Ittars are created without any alcohol or chemicals, only using traditional methods of hydrodistillation and are some of the purest forms of perfumery. “The scent of attar/ittar was considered stuck in time by the modern globetrotting Indians who are slowly becoming global citizens. The industry and thousands of makers who have spent their lifetime honing the art of attar making were slowly getting confined to the margins with artificial perfumes taking the stage. While the tradition was still there, it was time to rescue it. Kastoor is a humble attempt to bridge this gap and bring the fragrant culture back, with a modern twist,” shares Tiwari. House of Kastoor is a small luxury perfumery that caters to a niche market of fragrance connoisseurs who are looking to bring back this ancient art. The scents at Kastoor are essentially toned-down versions of the heady ittars and are available in scents that are more palatable to the contemporary user.

House of Kastoor’s founder, Esha Tiwari on the modern ittars:

What is a ‘modern ittar’? How are they different from traditional ones?

Kastoor, a brand of “modern ittars”, offers a modern experience of distilled history. Exclusive ittar blends cater to the modern scent sensibilities created after months of trials and research. Made through traditional methods of hydrodistillation, the ittars are without any alcohol and chemicals, using pure extracts, reinventing the oldest and the purest form of perfumery for the modern world & heralding the culture of clean fragrances in India.

From ingredients to manufacturing, the entire process is based in India. By offering “modern ittars”, the brand gives a contemporary edge to numerous attar craftsmanship currently, changing the course of their livelihoods. At the helm of a cultural renaissance through scents, Kastoor is helping a dying industry flourish by giving a contemporary edge to the workers who aren’t introduced to the world of machines and in turn bringing the modern Indians a piece of India’s fragrant heritage.

Tell us about the sensorial impact the bylanes of Benaras have left on you that has aided in the creation of the brand, Kastoor?

Born in Banaras (Varanasi, Kashi) of UP, I have seen the ittar culture up and close. I have grown up seeing the charming empty fragrant ittar bottles kept on the drawers and watched them get pushed away by synthetic fragrances year by year. Right from childhood, I have visited the ‘bhattis’ where the world’s most phenomenal scents are made. This is my cultural debt, to the era, to the artisans, to the experience. It’s time to reinvent the purest art of perfumery for the modern world.

Building Kastoor was a natural next step. I was born in a state in India which used to make these phenomenal scents but were at a dying stage of the industry. What does a dying industry which does not lack in talent, but lacks in keeping up with the times, needs the most? Marketing. I used my career-long skills in marketing to uplift lives and empower people, and created a brand with product innovation of 5 exclusive concoctions that are traditional and modern at the same time. The design of the product is one of the most intriguing and unique creations in itself. The traditional attar bottles came in a non-luxurious packaging of a plastic golden cap and a cheap glass bottle, discouraging consumers to take pride in it and bragging about it in front of their friends or showing off as a collectable. Kastoor’s bottle packaging made the difference. The big wooden caps, with engraved frosted bottles, a chic design that soon everybody started flaunting on their social channels. While on one hand it gave a contemporary edge to the fine attar craftsmanship, on the other hand, it gives a piece of one’s own heritage in the most fragrant and modern way to the consumer of today’s day and age. 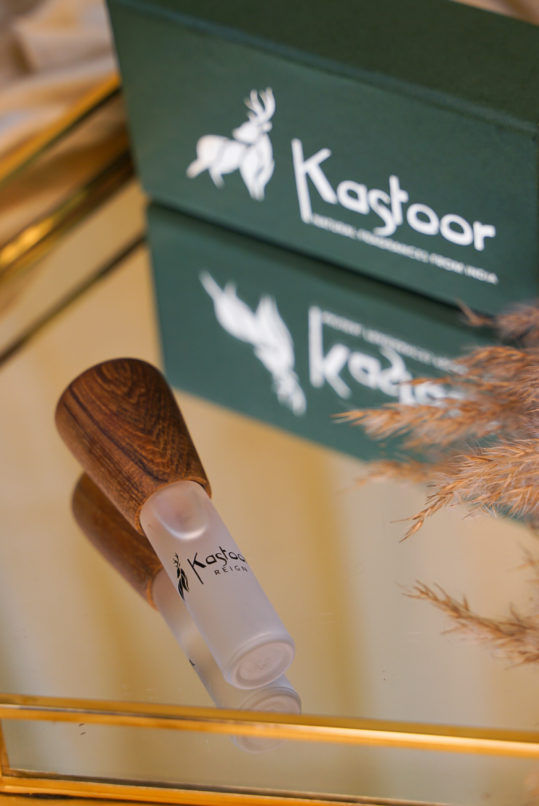 Where and how are the ittars crafted?

It’s an art, very much like life itself, which is meant to be savored. The making of ittars is not just any process but an art. But the scent of attar/ittar was considered stuck in time by the modern globetrotting Indians who are slowly becoming global citizens. The industry and thousands of makers who have spent their lifetime honing the art of attar making were slowly getting confined to magins with artificial perfumes taking the stage. While the tradition was still there it was time to rescue it. Kastoor was born to bridge this gap. By offering “modern ittars”, the company gives a contemporary edge to numerous attar craftsmanship currently, changing the course of their livelihoods. At the helm of a cultural renaissance through scents, Kastoor is helping a dying industry flourish by giving a contemporary edge to the workers who aren’t introduced to the world of machines and in turn brings the modern Indians a piece of India’s fragrant heritage.
Large copper pots or deghs, each the size of a boiler are set into a mud brick platform, broken by an arcade of fireplaces, and faced by a series of cooling tanks. Each tank is connected by a long-necked copper receptacle filled with sandalwood oil known as a bhapka, which lay partially suspended in cold water. Linking degh and bhapka are two pipes of hollow bamboo through which the vapour would travel. After the different botanicals had been ground, the copper cauldron would be filled with around 40kg of water and the fires lit. At each stage of distillation (total it takes about 4), a new layer of complexity would be added to the oil in the bhapka.

Why did you decide to keep the scents gender neutral or agnostic?

The world of ittars never differentiated between the gender it is catering to. It went for the ‘Mizaj’, loosely translated as ‘temperament’. By nature, the purity of ittars, helps in the elevation of one’s emotional and mental health.. The scents take into account the pure ingredients and the effect it will have on your body and soul. The Indian sense of scents is much beyond just smelling great.

How do you determine the scent combinations…

We do workshops with traditional ittar artisans across India, currently covering Hyderabad, Kannauj and Uttarakhand, where their traditional ittars is guided with a modern sense of perfumery. We have contemporary perfumers on board who help bridge this gap, to create ittars which are still very Indian, still pure ittars, but adapted to modern scent sensibilities. 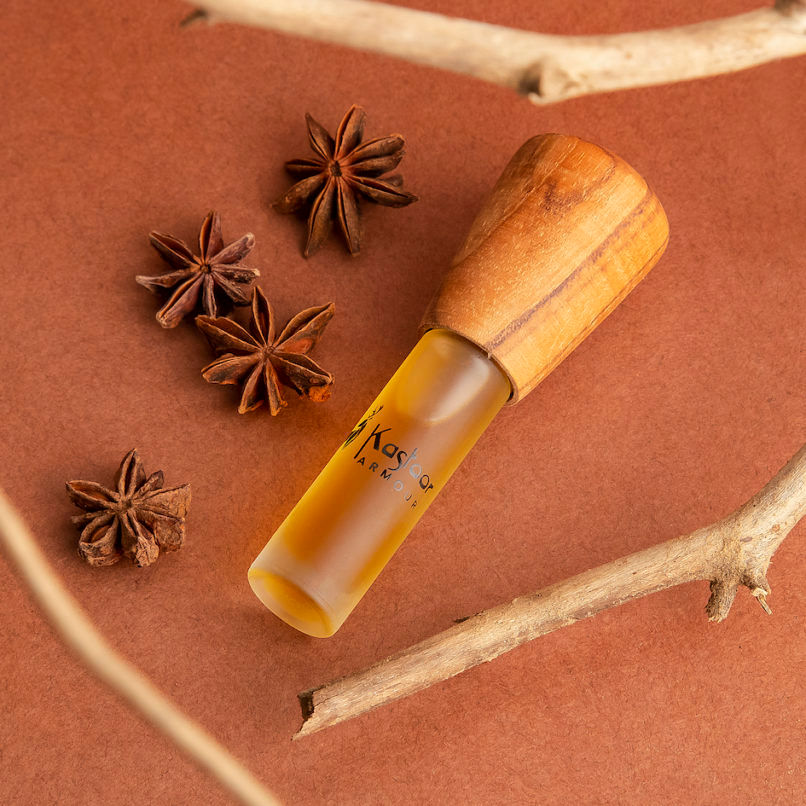 Is there a perfume that left an impact or one that you use regularly?

I like lighter scents, so I love the orange blossom, bergamot & cedarwood variant we have called Panache and Also the White Oudh variant called Reign. I am also obsessed with the new summer Variant we are launching called Mirage which is a sweet distillation of honeysuckle. I carry it always in my bag and have made everyone around me try it even before the launch. I like how personal these scents get. How a perfumer evaporates, an ittar absorbs. It becomes your own version of a signature scent, which just makes you fall in love with yourself with every whiff.

Your thoughts on the recent growth of India’s niche luxury fragrance industry?

With a global fragrance and flavour market worth $24.10 Billion and India contributing approximately $500 million to it, the growth rate for fragrances in India is expected to grow above 11% in the upcoming years. India is also the leading country in the world with a rich diversity in flora and fauna with its 15 Geo- climatic zone. India can produce organic fragrant raw materials which have great demand in the world. Considering its close linkages with grass-root economics, it can reboot the Indian economy from the ground level and Kastoor is an attempt to redefine the fragrance economy of the country and bring India on the global map of fragrances.

All Images: House of Kastoor.

best niche indian perfumes Haute Perfumery indian perfumes Homegrown perfume labels
Akshita Nahar Jain
Sr Associate Editor
Akshita Nahar Jain has worked with various publications, including Elle, Harper’s Bazaar Bride, and Time Out Delhi, and written extensively on fashion and lifestyle. A sucker for alliteration and stylish sitcoms, she enjoys scrolling the web for less travelled destinations.
Sign up for our newsletters to have the latest stories delivered straight to your inbox every week.

Why the science of sleep makes all the difference