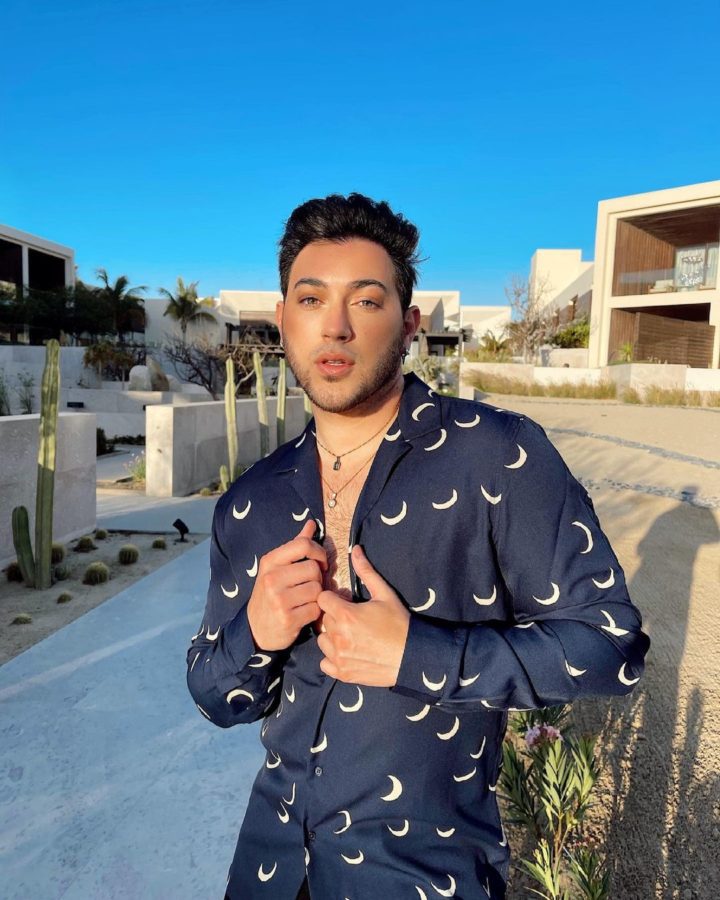 The subject of makeup has traditionally been considered a woman’s domain. But who says makeup is only for women? Several male beauty influencers are now breaking those barriers.

The makeup industry has many gems in its world that have exceptional talent and skills. The 21st Century is all about growing and changing perspectives. Each year people get more open about things that were once taboo. We can now find makeup products created specifically for men. It’s not a rarity anymore to see male beauty influencers with a full face of makeup looking flawless as ever.

Men applying makeup might still be a stigma for some, but not for Ankush Bahuguna. This Delhi-based male beauty influencer, known for his humorous videos, also has a page dedicated to makeup: wingitwithankush. Not only would you see videos of him applying makeup on himself, but he also brings other creators, friends and family to apply makeup on. His makeup style is minimal, with a pop of colour here and there. Even though he claims ‘to not be a professional makeup artist yet just winging it’, he sure is winging it pretty well!

This Filipino-American beauty and social media influencer from Hawaii bagged ‘Beauty Influencer of the Year’ at the People’s Choice Awards in 2019. His cheery personality and courage are evident in both his makeup and fashion choices. He has collaborated with Wet n Wild for a collection of his own, Jungle Rock. As a teenager, he started creating tutorials and product hauls that also showcased his sense of humour. Bretman Rock has come a long way as a male beauty influencer, with about 17.9m followers on Instagram.

Another Indian male beauty influencer Deep Pathare is all about vibrant colours. His blending skills are up to the notch, and each look he does is stunning! His creations range from a simple glowy look to dramatic, bold colours, or graphic liner looks. He was also named the ‘Upcoming Male Beauty Influencer’ by Cosmopolitan India in 2020.

The epitome of a male beauty influencer would be James Charles. He was the first male ambassador for CoverGirl and is one of the top male beauty influencers on social media. All this before he even got out of high school. He has grown exceptionally — from being the makeup artist during the wedding of another renowned artist, Tati Westbrook, to collaborating with big brands and having his reality show. This trendsetter’s looks are nothing short of looking dazzling.

The first male brand ambassador for Maybelline, Manny Gutierrez, is also known as Manny MUA, the founder of a makeup brand named Lunar Beauty. Starting with Instagram, he jumped onto making tutorials and videos on YouTube, creating a massive following for himself. He has also demonstrated his makeup skills via several celebrities. The looks he creates are extravagant and always look impeccable.

With a focus on contouring and highlighting, Patrick Starrr, a notable makeup artist and founder of beauty brand One/Size, is highly regarded for his YouTube makeup tutorials. All his looks are exuberant and look striking. He is never too shy to go bold with his aesthetics. His makeup always matches the clothes and the head wrap he wears so beautifully.

One of the youngest male beauty influencers, Reuben de Maid was only 12 years old when he debuted. To illustrate his singing talent, he had appeared on The Ellen Degeneres Show, where people noticed how flawless his makeup looked that he had applied on himself! Although young, his talent seems to be reflected supremely in his impressive looks.

If you ever want to look at some gorgeous makeup looks, Shantanu Dhope’s Instagram is the place to be! His page is full of colour, with makeup looks for every festival and always on top of trends. He has some stunning not to be missed transition videos with trendy audios to check out. Staying true to his roots, most of his looks have a desi touch to them.

Along with fashion, Zachary Edward is also known for his makeup tutorials, product recommendations and videos showing tips and tricks. His looks are subtle and elegant, making it easy to recreate. Along with creating content for Instagram, he has a YouTube channel, too, that features tutorials and reviews. He has also collaborated with Patrick Starrr, amongst other beauty influencers.