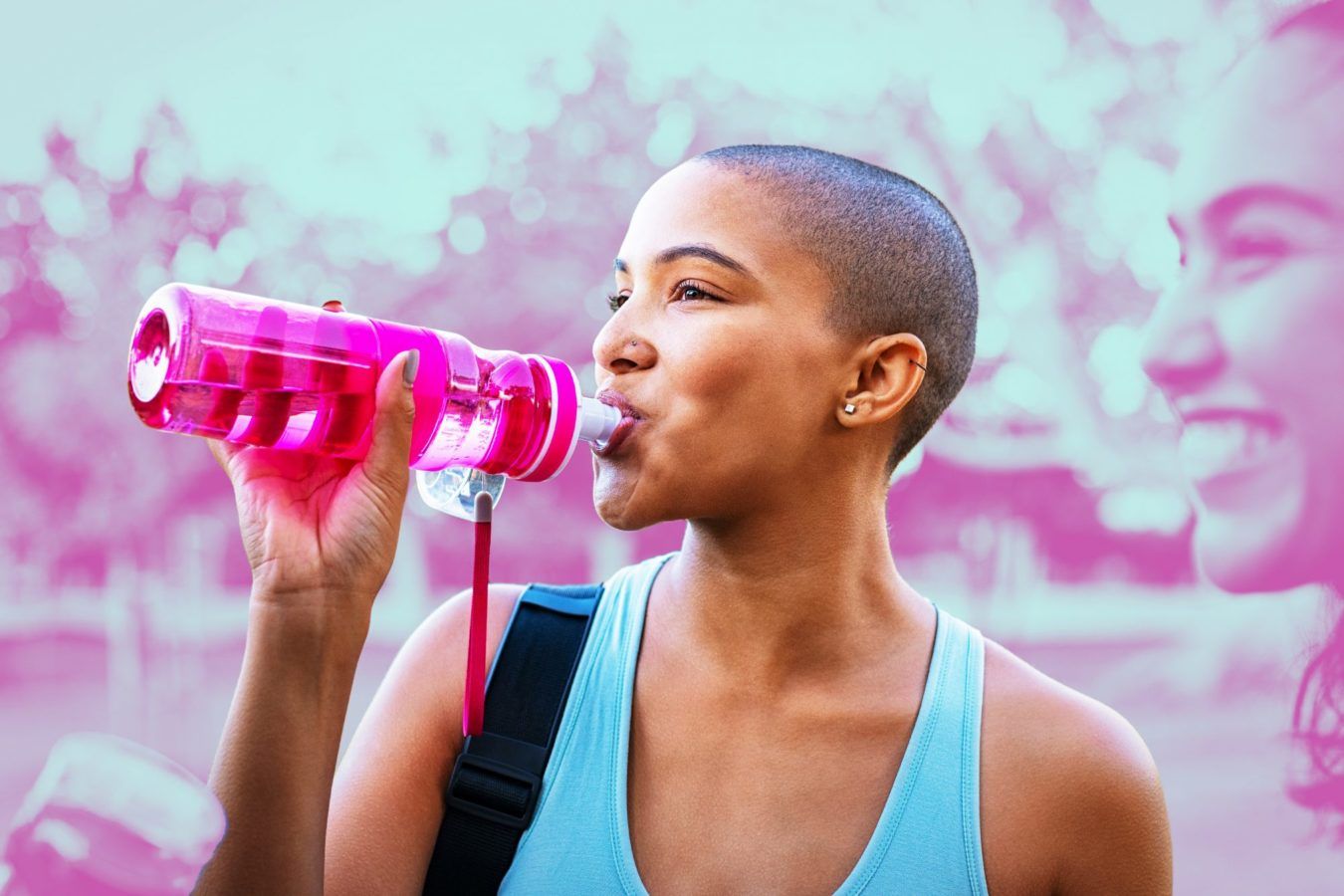 If you’re trying to lose weight, making simple changes to your lifestyle, such as heading outdoors for longer walks, reducing your stress levels, and drinking more water, may seem like the least overwhelming, and perhaps most sustainable, course of action. But can upping your H2O intake really help you achieve your goals? And, if so, how much water should you drink to lose weight? Here, two nutrition pros break it down.

Why is water important, anyway?

Before you get the DL on water’s potential role in weight loss, you should know the key benefits of staying hydrated in the first place. For starters, sipping on your recommended amount of fluids each day — whether it be straight-up water, herbal tea, coffee, smoothies, or soups and yoghurt (yes, liquid foods count) — helps keep your body running smoothly, says Molly Kimball, RD, CSSD, a registered dietitian at Ochsner Fitness Center in New Orleans and host of the podcast FUELED Wellness + Nutrition. Fluids play a role in certain metabolic processes, such as the digestion of carbohydrates, fats, and proteins and the breakdown of the vitamins you eat into a form that can be absorbed and used by your body, “and so our hydration status is necessary for all these things to take place,” she explains. Plus, research shows staying hydrated helps your body remove waste (via sweating, urinating, and defecating), reduces the risk of kidney stones, and eases skin dryness, says Jennifer McDaniel, MS, RDN, CSSD, LD, a registered dietitian nutritionist and the owner of McDaniel Nutrition Therapy.

Aside from supporting basic bodily functions, consuming enough fluids is key to keeping your energy levels high, says Kimball. “One of the first signs of even a [slight] dehydration is fatigue — feeling a little sluggish and a little tired,” she says. “When someone says that they’re having that afternoon energy slump, before I’m even looking at what they’re eating, I’m looking at how they’re hydrating themselves through the day. And a lot of times, it’s that they’re simply not getting enough fluid.” On the same token, your fluid intake can also affect how you feel while exercising; you might feel fresh and strong while breaking a sweat if you’re adequately hydrated, and if you’re not, you could feel “like you’ve already gone for a run when you first start out,” says Kimball.

To figure out exactly how much fluid you need for your body to properly function, Kimball recommends taking your weight in pounds, then dividing it by two — that result is the amount of fluid, in ounces, you’ll want to try to consume each day. If you weigh 150 pounds (68 kg), for example, you’ll need to consume 75 ounces (2 lt) of fluid a day, she explains. That said, you’ll want to take in an extra 16 ounces (0.5 lt) for every pound of sweat you lose (think: post-spin class or while hiking on a hot, humid day), she says. “If you’re typically doing, say, a morning cycle class or a morning boot camp class, it can be beneficial for a few times…[to] weigh yourself before and then after,” she says. “Then you kind of get a sense of how much sweat you’re typically losing during that workout and [can] aim to replenish at least 16 ounces (0.5 lt) for every pound of sweat lost.”

Even slight dehydration can make you feel fatigued and irritable, and in those instances, you might turn to comforting, refined carbohydrates (which are low in satisfying fibre) and sugar for an energy boost, says Kimball. The reason: Carbohydrates are digested quickly, raise blood sugar levels in roughly 15 minutes, and release mood-boosting serotonin and satiating hormones, Abby Chan, MS, RDN, a registered dietitian nutritionist and the co-owner of EVOLVE Flagstaff in Arizona, previously told Shape. “It could be sugars, it could be chips, it could be whatever, but we’re looking for carbs for that pick-me-up or that mood booster to kind of fix it,” says Kimball. “But a lot of times, what we’re experiencing or why we’re feeling that is because of that low-level dehydration.”

Of course, carbohydrates are a good thing. Once they’re broken down into glucose, carbohydrates are your body’s main fuel source, and they should make up 45 to 65 percent of your total daily calories, according to the United States Department of Agriculture’s Dietary Guidelines for Americans. However, excess glucose — meaning glucose that’s been consumed but not used for energy — is stored in the liver, muscles, and other cells for later use, or is converted into fat, according to the Mayo Clinic. Similarly, consuming high amounts of added sugars — which typically offer little nutritional value but have 4 calories per gram — may contribute to weight gain, according to the Mayo Clinic. Case in point: Reducing intake of added sugars has been linked to a modest decrease in body weight, while a higher consumption is linked to weight gain, according to a 2018 review published in BMJ.

That means staying on top of your fluid intake and hitting your recommended amount each day may curb mindless snacking on carb-heavy, fibre-lacking, yet momentarily energising foods, says Kimball. “We’re not saying if you drink all your fluids for the day that you need, you’re not going to crave carbs,” she says. “There are so many other things that go into it, but you at least reduce the odds that you’re going to reach for those carbs because you’re experiencing these symptoms of low-level dehydration.”

It Could Make You Feel Fuller Before a Meal

When you sip on water (or any fluid, for that matter), your stomach expands, and specific neurons that detect stretching in the organ tell your brain that you’re full, says McDaniel. Consequently, “when we drink water before a meal, there is the potential to reach fullness sooner due to these cues,” she says. “If someone tends to be a big volume eater, having something like herbal tea or broth-based soup [before eating a meal] can definitely help give you that sense of volume,” adds Kimball.

Research backs this idea up, too: A small 2007 study found that middle-aged and older men consumed less during a meal when they drank 500 millilitres (about 16 ounces) of water 30 minutes before eating. Similarly, a 2009 study found that middle-aged and older participants who stuck with a low-calorie diet and sipped on 500 millilitres of H2O before each of their three daily meals over 12 weeks lost about 2 kilograms (about 4.4 pounds) more than folks who just followed a low-calorie diet.

It Could Slightly Increase Your Metabolism

Despite popular belief, amping up your H2O intake isn’t going to seriously rev your metabolism (aka the process by which your body converts food and drink into energy), says Kimball. “Research shows that when we drink water, the process to warm up the water — if it is chilled — requires energy, therefore slightly increasing metabolism,” adds McDaniel. “While this benefit might be present, it plays a very minor role in the total number of calories burned in a day. ”

What’s more, a boost in metabolism may only occur if you’re chronically dehydrated — meaning you’ve been slacking on your fluid intake for days or weeks, says Kimball. “I wouldn’t say it’s always going to happen, but it’s possible that you would have a slightly lower metabolic rate [if you’re dehydrated],” she explains. “So when you’re drinking more fluid to remedy that, you might see a slight correction in that metabolism, that metabolic rate, but it’s not really going to be a big game-changer for us” in terms of weight loss.

And so far, the most consistent research supporting the link between increased water intake and weight loss via improving metabolism comes largely from rodent studies. This research has shown that increased hydration may increase metabolism. In turn, the functioning of mitochondria — the structures within cells that make the energy in food usable — may improve, which can increase the breakdown of fat in certain cells, according to a 2016 review published in Frontiers in Nutrition.

TL;DR: Staying hydrated and sipping on chilled water could minimally increase your metabolism, but its effects on the breakdown of fat in humans haven’t been proven just yet.

How much water should you drink to lose weight?

If you’re wondering, “how much water should I drink to lose weight?” know there isn’t one set-in-stone fluid recommendation for weight loss. The aforementioned studies showing a link between pre-meal H2O intake and food consumption during a meal both involved 500 millilitres of water. And a 2008 study of 173 “premenopausal, overweight” women who were following various popular weight-loss diets found that increasing water intake from less than 1 litre (nearly 34 ounces) a day to more than 1 litre was associated with a 5-pound (2 kg) weight loss over the course of a year.

That said, 34 ounces (one litre) of water likely isn’t enough H2O to keep your body adequately hydrated, as it’s recommended to gulp down the same amount of fluid in ounces as half of your body weight, says Kimball. So whether or not you’re looking to lose weight, aim to hit your personal quota, she says.

Drinking water and consuming fluids may potentially contribute to weight loss, either through curbing your carb- or sugar-heavy cravings, boosting feelings of fullness, or increasing your metabolism. But there isn’t one magic answer to “how much water should I drink to lose weight?” — nor is water a weight-loss elixir. Instead, staying hydrated should be seen simply as one single component of a holistic strategy to hit your health goals, which may also include scoring satisfying macronutrients (e.g. fats, fibre, protein), limiting refined carbohydrates, and increasing your movement throughout the day, say Kimball and McDaniel. “It’s sort of a very moderate [approach to weight loss], but none of it is like, ‘Oh, drink this much water and you’re going to melt it off of you,'” says Kimball.

And if you’re thinking about trying to lose weight, both nutrition pros recommend scheduling an appointment with a registered dietitian or your health care provider before chugging a gallon (almost four litres) or two of water. “The money that you would spend [on a consultation] can pay so much more dividends in the long run because it’s giving you an education,” says Kimball. “It can save you money from trendy mistakes that you can make later, and it helps you learn more about your own relationship with food…so it can help you start to learn a little bit more of a personalised approach for yourself.”

Weight Loss drinking water Fluid Intake
Megan Falk
Weight Loss
Sign up for our newsletters to have the latest stories delivered straight to your inbox every week.

Pink shared her ‘spiritual toolbox’ for dealing with panic attacks