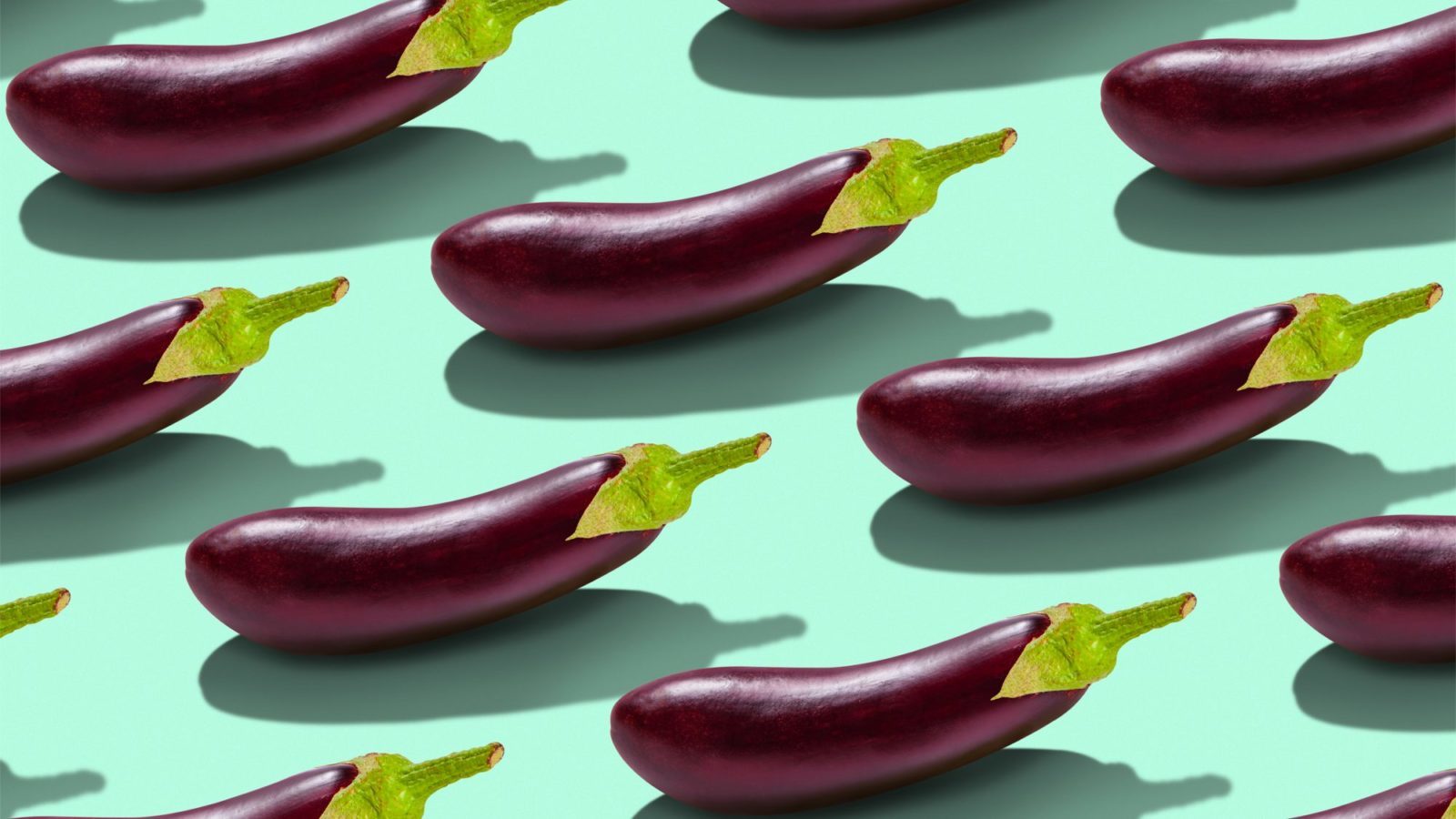 When it comes to summer produce, you can’t go wrong with eggplant. Known for its deep purple hue and a certain euphemism via emoji, the veggie is impressively versatile. Serve it on sandwiches, toss it in salads, or add it to brownies. The warm weather veggie is also packed with antioxidants and fibre, offering stellar benefits for your heart, gut, and more. Not sure if eggplant deserves a place on your plate? Read on for the health benefits of eggplant, plus ways to add eggplants to your summer menu.

As part of the nightshade family, eggplant (aka aubergine) is genetically related to peppers, potatoes, and tomatoes. It’s native to South Asia and grows in a wide range of shapes, sizes, and colours. The most common variety in the US is the globe eggplant, which is dark purple and oval, according to the University of Kentucky Center for Crop Diversification. And while eggplants are typically prepared as you would other veggies (think: steamed, grilled, fried), they’re botanically classified as fruits — berries, in fact — according to the University of Florida. (Who knew?)

Boasting an array of nutrients — including fibre, potassium, magnesium, iron, vitamin C, and vitamin B 12 — eggplant is quite an all-star piece of produce. Its peel is rich in anthocyanins, which are antioxidants and natural plant pigments that give the fruit’s skin its purple hue, according to a 2021 study. (BTW, anthocyanins are also responsible for red- and blue-colouring of produce, such as blueberries, red cabbage, and currants, as well as butterfly pea tea.)

Here’s the nutritional profile of one cup of boiled eggplant (~99 grams), according to the United States Department of Agriculture:

Okay, so the purple produce is packed with nutrients — but how does that translate to your health? Ahead, the lowdown on eggplant health benefits, according to registered dietitians and research.

Eggplant peel is packed with anthocyanins, which, ICYDK, protect the body from oxidative stress by neutralising free radicals (aka potentially harmful molecules), says Andrea Mathis, MA, RDN, LD, registered dietitian and founder of Beautiful Eats & Things. This is key because high levels of oxidative stress can damage cells and DNA, contributing to the development of conditions such as cancer, diabetes, or heart disease. The major anthocyanin in eggplant peel is nasunin, and while there isn’t a lot of research on it, two lab studies found that nasunin has antioxidant properties that can help quell inflammation.

Meanwhile, eggplant flesh contains antioxidants known as phenolic acids, according to an article in the South African Journal of Botany. Not only do phenolic acids find and neutralise free radicals, but they also stimulate protective antioxidant enzymes in the body, making eggplant an especially awesome antioxidant food, according to research published in Biotechnology Reports. (Another seriously antioxidant-rich ingredient? Spirulina.)

As the antioxidants in eggplant combat oxidative stress, they also protect your brain. Oxidative stress can contribute to neurodegenerative diseases such as Parkinson’s disease and Alzheimer’s disease, according to a 2019 article in the journal Molecules. Plus, “the human brain is particularly susceptible to oxidative damage,” explains Susan Greeley, MS, RDN, registered dietitian and chief instructor at the Institute of Culinary Education. This is due to numerous reasons, but basically, the brain relies on many molecules to function. If a certain molecule experiences oxidative damage, it can mess with the other molecules — and their ability to interact and send signals to one another, according to an article in the journal Redox Biology.

Antioxidants, however, can shield your brain from this oxidative stress. This includes the anthocyanins in eggplant peel, which “can help boost memory and benefit overall neurological health [as well],” notes Kylie Ivanir, MS, RD, registered dietitian and founder of Within Nutrition. A 2019 article in the journal Antioxidants also shares that anthocyanins and phenolic acids offer neuroprotective effects.

“The fibre in eggplant is a mix of insoluble and soluble fibre,” which paves the way for a happy digestive system, explains registered dietitian Tiffany Ma, RDN. Insoluble fibre doesn’t combine with water (and other liquids) in the gut. This promotes the movement of food through the intestines, ultimately preventing and relieving constipation, according to the University of California San Francisco. On the other hand, soluble fibre does dissolve in H20 in the gut, creating a viscous, gel-like substance that forms stool, improves constipation (by softening dry stool) and diarrhoea (by firming up loose stool). Ah, sweet relief. (FYI — You can also fill up on both types of fibre by chowing down on cantaloupe, another summer produce.)

Ma also dubs eggplant as a heart-healthy food, due in part to its fibre, which helps support healthy blood pressure and cholesterol levels, she says. (High blood pressure and high cholesterol are major risk factors of heart disease, according to the Centers for Disease Control and Prevention.) The antioxidants in eggplants can also lend a hand, as free radicals “may be involved in the development of atherosclerosis or the buildup of plaque in the arteries [that] can lead to heart disease,” explains Ivanir. As the fruit’s antioxidants combat free radicals, they also can protect against atherosclerosis, says Greeley. What’s more, eggplant flesh contains chlorogenic acid, an antioxidant that may help lower levels of LDL (“bad”) cholesterol, says Ivanir. It can also reduce high blood pressure by increasing nitric oxide, a molecule that relaxes your blood vessels, according to a 2021 scientific review.

The fibre in eggplant can also stabilise blood sugar levels. “Fibre is an indigestible nutrient, which means our bodies take a while to metabolise [it],” says Ma. This slows down the digestion and absorption of carbohydrates in the body, explains Mathis, thus preventing blood sugar spikes, which, when frequent, can increase your risk of type 2 diabetes. And then there are also the flavonoids (another type of antioxidant) in eggplant, which can suppress the activity of alpha-amylase, an enzyme found in saliva that’s responsible for breaking carbs into sugars. By inhibiting its activity, however, flavonoids can help slow down sugar absorption and, in turn, the rise of blood sugar, according to a review in the Iranian Journal of Basic Medical Sciences.

Once again, fibre is behind this eggplant health benefit. Fibre delays gastric emptying, or how fast food leaves your stomach, in increasing the release of satiety hormones and ultimately keeping hunger (and, let’s be honest, hanger) at bay, according to a 2018 article. So, if you’re trying to curb hanger on a busy day or striving toward healthy weight loss or maintenance, fibre-rich foods such as eggplant are an excellent choice, says Ivanir.

“Overall, eggplant is pretty safe to eat,” says Mathis — unless, of course, you’re allergic to the fruit, which is rare but possible, notes Greeley. Never eaten eggplant before and have a history of food allergies or sensitivities? Start by eating a small amount, and stop if you experience any food allergy symptoms such as hives, stomach cramps, or shortness of breath, she says.

Members of the nightshade fam, including eggplant, contain a chemical called solanine. It’s said to trigger inflammation in some people, including those with arthritis, but “there’s no solid proof that supports this claim,” says Mathis. Still, if you notice any worsened symptoms (think: increased inflammation, swollen or painful joints, after eating eggplant), you might want to avoid it, she advises.

How to Prepare and Eat Eggplant

In the supermarket, you can find eggplant all year round in various forms: raw, frozen, jarred, and canned. The most common variety, as mentioned earlier, is the dark purple globe eggplant, though you might be able to find other types, such as white or green eggplant. All types of eggplants taste similar, so they can be used interchangeably, according to the University of Florida. That said, smaller varieties (i.e. fairy tale eggplant) work well as appetisers, while bigger versions (i.e. globe eggplant) make better plant-based burgers.

In the freezer aisle, you can find eggplant on its own or in meals. As with all packaged foods, however, be sure to check the sodium levels on the label, as too much of the salt in your diet can increase blood pressure, explains Ma. “Less than 600 milligrams per serving [is] a good rule of thumb.”

Raw eggplants can be boiled, grilled, steamed, sauteed, deep-fried, and roasted, says Mathis. To prepare an eggplant at home, wash it under running water and then “cut off the ends, [but] be sure to keep the skin on because it contains the bulk of the nutrients,” she explains. From there, you can cut the eggplant into slices, strips, or cubes, depending on your recipe.

But, can you eat eggplant raw? “Raw eggplant has a bitter taste with a spongy texture,” so, you might not want to eat it raw even though it’s totally safe to do so, says Ma. Cooking eggplant minimises this bitter taste, but you can also lightly salt the eggplant after cooking it to reduce the bitterness even further. Just let it sit for 5 minutes, then add it to your recipe as usual.

Once you’re done with shopping and prep, it’s time for the best part — eating eggplant. Here are a few tasty eggplant recipe ideas to get you started:

In sandwiches. Eggplant slices are a perfect size and shape for burgers. Plus, cooked eggplant has a meaty texture, making it an excellent alternative for traditional meat burgers, says Ma. Or, try eggplant sloppy joes for a comforting vegan meal.

As a grilled dish. For a deliciously smoky bite, toss eggplant on the grill. Take a tip from Greeley and brush eggplant rounds with your fave pesto or a mixture of olive oil, balsamic vinegar, and herbs. “Place the eggplant on a hot grill over a low flame and grill each side until tender.” (To make it a meal, pair grilled eggplant with pasta or farro.)

As a roasted side. No grill? No problem. Coat eggplant slices in oil and spices, then bake ’em at 204° C for 20 minutes, recommends Ivanir. “When it’s ready, [garnish] with fresh tahini, lemon, and flaky sea salt for a fun side dish,” she says.

In brownies. Yes, you read that right. When used in place of oil or butter, the moisture of eggplant gives brownies a silky texture. Try eggplant brownies and see for yourself.

Shape and the Shape Logo are registered trademarks of Meredith Corporation. Used under license.

Can a daith piercing cure migraines? Experts weigh in