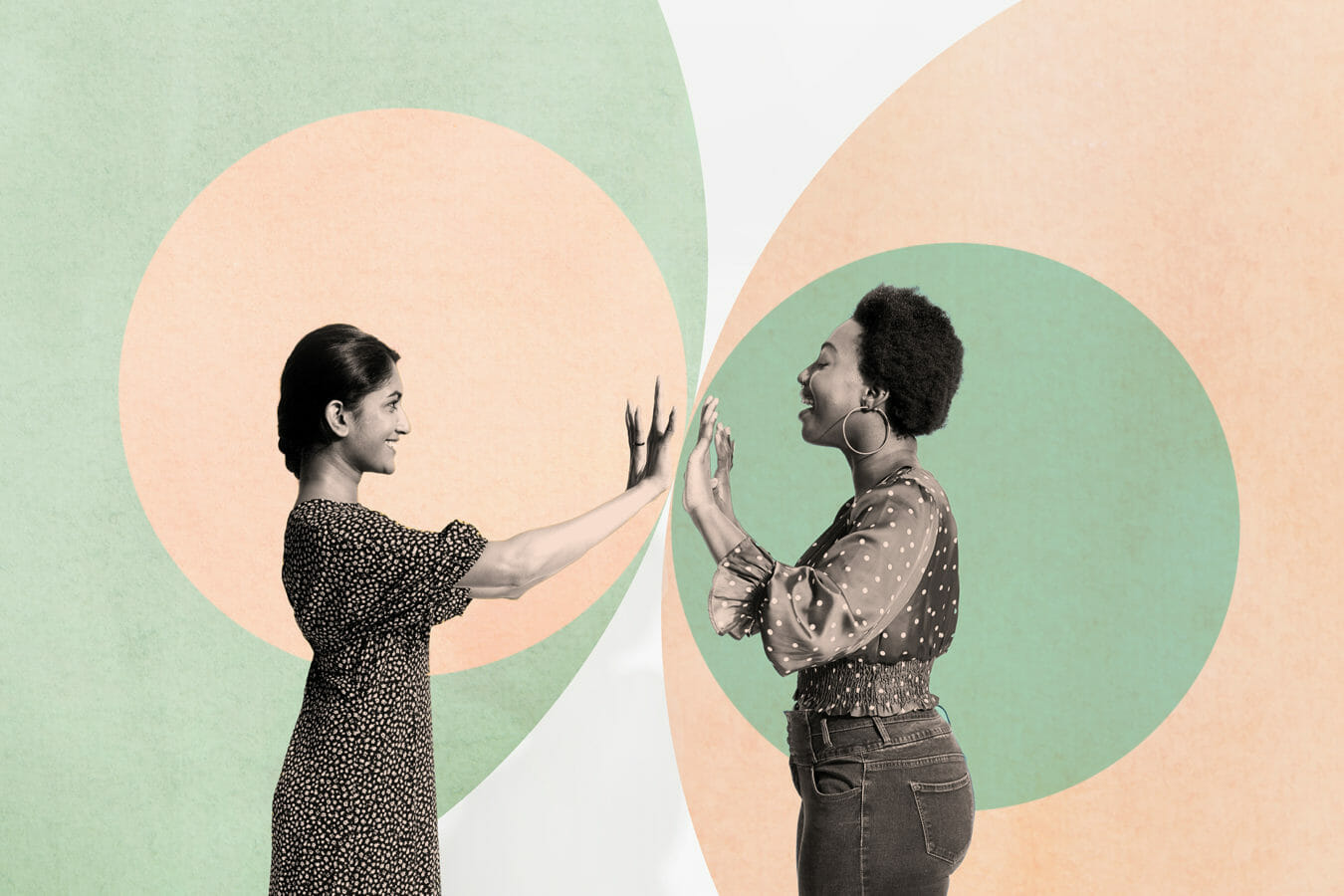 Setting boundaries has become a very hot topic in the realm of mental health and relationships during the past few years (yay!). But what most people don’t realise is that it really isn’t all that glamorous — or easy — to set these boundaries in your own life.

At times, boundaries can feel rude or mean (if you aren’t used to setting firm boundaries) or even painful and unfair. How do you best set your own boundaries, enforce them in a loving way, and also uphold the boundaries people make towards you? This work isn’t easy, but it will make your relationship with yourself and everyone else in your life so much healthier and happier. Here’s the playbook on how to set boundaries with anyone in your life.

What are boundaries, and why are they important?

In essence, a boundary is a limit of what is okay and what isn’t. I like to describe boundaries this way because while boundaries can be complex, they can also be simple. And, to be blunt, if someone is setting a boundary towards you, their reason why is none of your business.

Consider this scenario from the book Getting It by Allison Moon: You’re in a new dating relationship, and tonight, you’re watching a movie and cuddling. You suggest an action movie that has a relatively intense sexual assault scene. Your date says, “I actually don’t watch movies with intense scenes like that. What do you think about watching _____?”

Now, this person didn’t go into detail (and they absolutely are not expected to) but this is an obvious boundary they have when it comes to movies and the media they consume. Maybe they’ve experienced a traumatic sexual assault in the past, maybe someone close to them has, maybe they’re just really sensitive to visuals — it doesn’t matter what their reason is, it’s a boundary that was kindly stated.

Boundaries don’t need to be explained, justified, or defended by you or anyone else. When talking about boundaries, you’re also talking about respecting people’s privacy, needs, and requests. The thing is, many people (including, yep, you) probably disrespect people’s boundaries all the time without thinking much about it or even being aware.

Consider an example of a reverse situation: You’re on a third date with someone and they invite you over to watch a movie at their place. You’re so excited to get cosy and experience this person in a new way. While you two are picking a movie, they suggest something that has a very intense sexual assault scene. Your best friend recently experienced a sexual assault and it’s just too graphic for you to watch casually at this time. You say, “I actually don’t watch movies with intense scenes like that. How about we watch _____?”

Then your date says, “No, seriously, this is such a good movie! You should give it a try, you might like it!”

See how this brushes right over the very clear boundary that you set? Now, this leaves you feeling like you should either explain yourself (see where the “shoulds” pop up? They’re sneaky!) or just go along with it — two things you really don’t want to do.

I use this example because it’s important to understand that people don’t owe you explanations for their boundaries (unless they want to share). It works in the reverse as well — you don’t owe anyone an explanation for why you’re setting a boundary.

However, there’s also space to understand and clarify with the person if you’re confused around the boundary they’re setting, too. Responding to the above situation with something like, “Oh! We had talked about watching Game of Thrones, so I thought you enjoyed that. No worries at all, we can watch something else! Can I ask what it is about those scenes that you don’t watch? I’d like to be able to pick a better movie in the future,” gives the other person the space to share or decline.

How to know when you need to set a boundary

Have you ever been asked to do something, watch something, participate in something, drive somewhere, eat something, kiss someone, and have felt nervous to say no? Have you ever given someone something, whether that be your time, money, or energy, only to be left feeling taken advantage of or resentful? These are all signs that a boundary needs to be set.

You likely know deep inside (read: a gut feeling) when you’re in a situation that needs a boundary, but it’s admittedly really scary to change a relationship dynamic. In fact, most of us will stay in pain instead of having the hard conversations or acknowledging the realities of things. As painful as change can be, is it really more painful than staying exactly where you are?

Boundaries aren’t walls between people, they’re guideposts to help you give and receive love and care in a way that feels good and is healthy — and that looks different from person to person. Creating boundaries allows you to continue being in a relationship with someone but doing so in the healthiest way possible.

How to set boundaries

As corny as it sounds, the easiest way to set a boundary is to speak from the heart. And if you’re the type of person that really likes guides or a script or some kind of direction for these things, here’s my three-step formula for setting a boundary. (P.S. This same format can be used for really any healthy, meaningful conversation.)

A statement of acknowledgement is one of the best ways to start any conversation. This statement names the reality, or the elephant in the room aka the thing no one is saying. Yup, you’re saying it out loud.

Explaining how to someone else is so important and yet it’s common to struggle with it — mostly because people don’t have practise doing it. The best way to do this is to use an “I statement,” to explain how you feel. (If you’re having trouble pinpointing what you’re feeling, try consulting a wheel of emotions.) Here’s what that could sound like:

Example 1: “I feel scared about what will happen if you keep spending money.”

Example 2: “I feel uncomfortable when you ask me about my sex life.”

Typically, when sharing emotions, you may tend to toss them to the person you’re talking to with some hope and/or expectation that they’ll know what you want. This statement, the offer, is where you actually state your boundary.

Example 1: “I realised I need to set a boundary around how much you share with me. I don’t want to hear about anything money-related until otherwise stated, okay?”

Example 2: “I’m not going to talk about my sex life and I’d really like it if you didn’t ask me about it anymore. Does that sound like something you can do?”

Why boundary setting can be difficult to accept

If boundaries are so wonderful and important, why does it feel so crappy at times when a boundary affects you personally? Well, a lot of people didn’t grow up with models of healthy communication, and things that felt like boundaries were most likely rules set by parents or parental figures. On top of that, as a kid you were likely not encouraged to set your own boundaries, so you never learned how to set, maintain, or respect boundaries, whether they were your own or someone else’s.

It’s this lack of experience or negative association with rules, combined with your internal rejection and threat monitoring system that can create a jarring or scary feeling when someone you love sets a boundary that affects you. When you perceive a threat, your brain starts re-organising its resources to keep you safe — which is great if there is real danger but not so great when it’s not the most “appropriate” response. In response to a perceived threat, you may feel overwhelmed, flooded, fearful, angry, and/or anxious, and then blame the other person for your uncomfortable feelings. In reality, you simply need an adult time out to become less flooded and able to be present in the conversation without that activation.

So, the next time someone sets a boundary with you, try thanking them for sharing with you and validate their boundary by honouring it. And when you’re feeling a little tickle of resentment or the little voice in your head telling you to say no… say something. Set that boundary and watch how beautiful your relationships will become.

What to do when someone crosses or disrespects your boundary

Let’s first remember that no one is perfect. So, it’s reasonable that if a boundary is a newer thing, someone may need reminding. I’d be as loving and gentle as possible when reinforcing the boundary, simply reminding the person of the agreement or ask what was agreed on. You can even follow a different version of the three-step framework above. “I know this is a newer boundary, but I felt hurt that you asked me about money after I told you that topic was uncomfortable for me and that I didn’t want to talk about it. Can you not bring that up again?”