Adhering to sustainable and ecologically-sensitive design practices, this award-winning university campus is a contemporary interpretation of traditional Buddhist architecture.

“The highest education is that which does not merely give us information but makes our life in harmony with all existence.”
—Rabindranath Tagore

Spread over 511 acres in Greater Noida, Uttar Pradesh, the Gautam Buddha University was born out of a need to infuse educational innovation with heritage and ancient wisdom. It was thus established as an academic and research institution that nurtures a vibrant community of purpose-driven intellectuals who aspire to create a better world. The master plan is based on Buddhist philosophies that teach humans the virtues of ‘simple living and high thinking’, and is deeply mindful of its impact on the environment.

The design re-envisions an initially tree-less, dry patch of land as a thriving biodiverse campus in harmony with nature. Furthermore, the use of passive campus design techniques, renewable energy resources, ecologically and socially sustainable design and construction methods, and water and waste management systems make the campus ecologically sensitive. Many of the campus buildings are also open for the use of the general public to ensure that the students can interact and engage with people from all walks of life. The university therefore, is also an essential part of the socio-cultural fabric of the area.

The iconic image of Gautam Buddha in his meditative posture is the primary design inspiration for the master planning of the university. At the ‘head’ of Lord Buddha sits the meditation centre and library, the sanctum for inner peace and the ocean of all knowledge. The eight faculties are located at the ‘body’, forming the backbone of the university. Besides, the eight academic blocks represent Buddha’s ‘Eightfold Path’—right understanding, right thought, right speech, right action, right livelihood, right effort, right mindfulness and right concentration. Finally, the administrative office, which supports the university’s day-to-day functioning, is located at the ‘feet’. A paved avenue connects the three zones and stands for the Buddhist concept of the ‘Middle Path’ that encourages one to find a sense of balance between life’s extremes or binaries.

As one enters the campus through a majestic main gateway, one is greeted by a forest that acts as a buffer from its high-traffic access along the Yamuna Expressway. The forest creates a tranquil environment depicting the threshold between the chaotic worldly life of hectic frenzies and an orderly environment of peace and discipline. It also helps regulate the local microclimate. Visible from afar, a magnificent statue of Gautam Buddha is located centrally within the academic zone. At the foot of the statue is a striking lake, formed at the natural depression of the site. The lake is a part of the site’s extensive water conservation system and doubles as a vibrant meeting place for students and faculty members. The faculty blocks are strung around this lake, connected by a colonnade interspersed with 18-feet-long hanging jaalis (traditional perforated screens).

The campus also comprises a meditation hall with a subterranean research facility. The building echoes the architectural symbolism of the Stupa (a dome-shaped building erected as a Buddhist shrine), designed to tie the earth with the sky when viewed on the horizon. The dome of the meditation hall is amongst the largest column-free domes in India.

In addition to the meditation hall, spaces such as a 2,000-seater convention centre, a Buddhist museum, an indoor stadium and an international guest house can be accessed by both the university and the neighbouring residents. These functions are located closer to the site periphery, thus ensuring minimal interference with the internal academic and residential functions. The campus also houses sports facilities and hostels for 5,000 students and 500 faculty members. Developed as a mixed-use complex, the university is able to invite community participation of up to 8,000 people at a time and enable them to coexist with nature harmoniously.

The Gautam Buddha University is a fine example of a contemporary, 21st century interpretation of conventional Buddhist architecture in an institutional context. Adhering to GRIHA guidelines set as standards for green buildings in India, the university serves as a pioneering example for successful green campus design. It is a testimony to the conscious balance between the natural and the man-made habitats in the modern world.

Travel
10 most beautiful universities in the world with breathtaking campuses 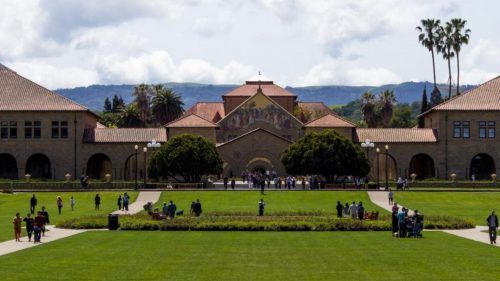 This story first appeared on Architecture+Design.