India is a land of mixed cultures. There are as many temples here as there are churches, forts and gurudwaras. Some of these are stunning places of spirituality and speak of immaculate architecture and intricate design. Today, we take a look at some famous churches in India which are beautiful and mesmerising. And can you think of a better time to visit them than when the spirit of Christmas is in the air?

India is a land of history and culture. Its rich past has left imprints across cultures. The most visible form of this is the many religious institutions here. From ancient temples to mosques, gurudwaras, synagogues and churches, the country is dotted with many such places of worship. Some of these also make for incredible tourist sites, given their intricate architecture and history.

If you are planning on touring some of these religious sites when visiting different cities, do check out these famous churches in India.

Famous churches in India known for their beauty

Se Cathedral Church is probably the most popular tourist spot in the state, especially when it comes to heritage structures. The spot is dedicated to St Catherine, and was built to commemorate the victory of Afonso Albuquerque. Its interiors are complete with high ceilings, mesmerising Iberian façade, intricate wood and gilded carvings, and magnificent Mosaic work make for a beautiful view.

The church has four altars – the main one plus three more. The place doesn’t just have its architectural beauty to marvel at, but additions such as the bell tower, Chapel of the Cross of Miracles, paintings, mosaics depicting various scenes of St Alexandria’s life and an 18th-century organ, among many other things are present in the church. 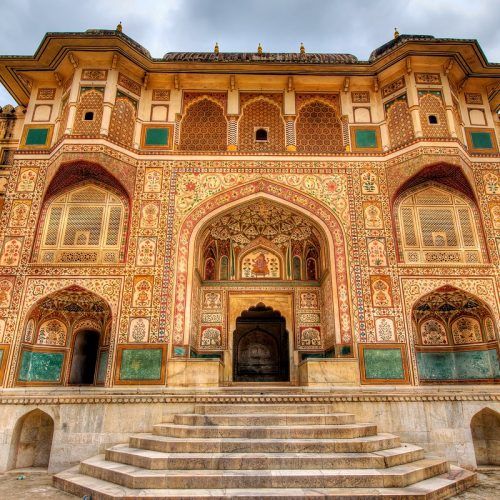 Shimla once served as the summer capital of British India. The hill station, known for its ambient cold in the hotter months, made for a cooling, calming retreat from the harsh heat of the plains. So it’s no wonder that the hill station is dotted with British-style architecture, bakeries, and churches. Among the most stunning of these is the Christ Church. Built in 1857, the structure has a Neo-Gothic style of architecture.

It has five finely stained glass windows, each of which depicts the Christian virtues of faith, charity, hope, fortitude, humility and patience. The attractions inside the church, apart from its high ceilings and stained glass, also include a pipe organ. This is the biggest such organ in India.

Kolkata is another hub for Victorian-style construction and culture. If you are in the city, be sure to pay a visit to St Paul’s Cathedral. The church, built in a Gothic Revival style, is an architectural marvel in itself. It has white walls, huge arched windows and high ceilings.

As the windows let in the sunlight, the entire church gets illuminated, revealing arched windows, stained glass panels and frescoes. Together, they make for a mesmerising sight, which will draw you in. Be sure to visit the church during the midnight mass on Christmas Eve, and anytime during the day.

Another popular church in Goa is the Basilica of Bom Jesus. The church is a UNESCO World Heritage Site. It is a treasure trove of art, history and culture, and is among the most respected places of worship in the state. The exteriors of the structure are un-plastered and comparatively bland, but do not be fooled – the interiors paint a contrasting picture, which will leave you in awe!

The façade here is a blend of Roman, Ionic, Doric, Corinthian and Composite architectural styles. It consists of fine marble floors, and also houses a modern art gallery depicting various scenes from the Holy Bible. The church is definitely a must-visit when you are in the state, and your visit will bring a zen-like calm.

San Thome Basilica is a Roman Catholic church in Tamil Nadu. Built in a Neo-Gothic style, the church was renovated by the British in 1893. The façade of the structure is white, and it houses the remains of St Thomas. Another unique feature of the church is the museum it houses inside.

The interiors of the church are carefully decorated with marvellous paintings and frescoes. The structure is complete with a high ceiling and huge windows to let in ample light and proper ventilation. It has a teak wood ceiling, and stained glass windows, another characteristic feature of the churches of the era.

Basilica of Our Lady of Dolours, Kerala

Basilica of Our Lady of Dolours is the third tallest church in Asia. The church has 11 altars and stands quite tall. The interiors feature church bells sourced from Germany, murals and images of saints, and ample religious scriptures. What makes it look even more magnificent is the decorations that adorn its walls and surroundings during Christmas. The parish is built in a Gothic style of architecture.

The ceiling features mural paintings of the Holy Trinity. Other attractions inside the church include a pulpit and throne used by Pope John Paul II, during his visit in 1986.

All Saints Cathedral in Uttar Pradesh is inspired by the Gothic style of architecture. The structure, built during the British Raj, is also called the Church of Stones or Patthar Girja. The huge structure can fit up to 400 people at a time and has plaques commemorating the various British rulers who passed away during their rule in India.

Among the key points of interest within the church are its pulpit, channel and tower right in the middle of the building. It features glass and marble work that have been well-preserved to date and is a beautiful place to visit and soak in some peace.

The Medak Church, or the Medak diocese, is the largest in Asia and only comes second to the one in Vatican City. The building, which took a decade to be fully constructed, is based on the Gothic Revival style of architecture. Its roof is soundproof, thanks to hollow sponge fittings.

The place is also adorned with Mosaic tiles specially brought in from Britain. Apart from this, the church features beautiful stained glass windows that let in ample light and make for a beautiful sight to witness. Paintings and artworks here include depictions of Jesus Christ’s life.

Our Lady of the Immaculate Conception Church, Goa

The church, which is also among the most famous churches in India, is built in a Portuguese Baroque style, and is located in Panjim, Goa. Among the most fascinating features here is its bell, considered to be the second largest in Goa after the Se Cathedral Church.

Visit this fascinating place for some beautiful hillside views, a white façade, a peaceful vibe and stunning interiors. It has high ceilings, which let in light and air, and paintings inside the church depict various episodes from the Bible and other religious stories.

A grand heritage museum will soon make its way to Varanasi