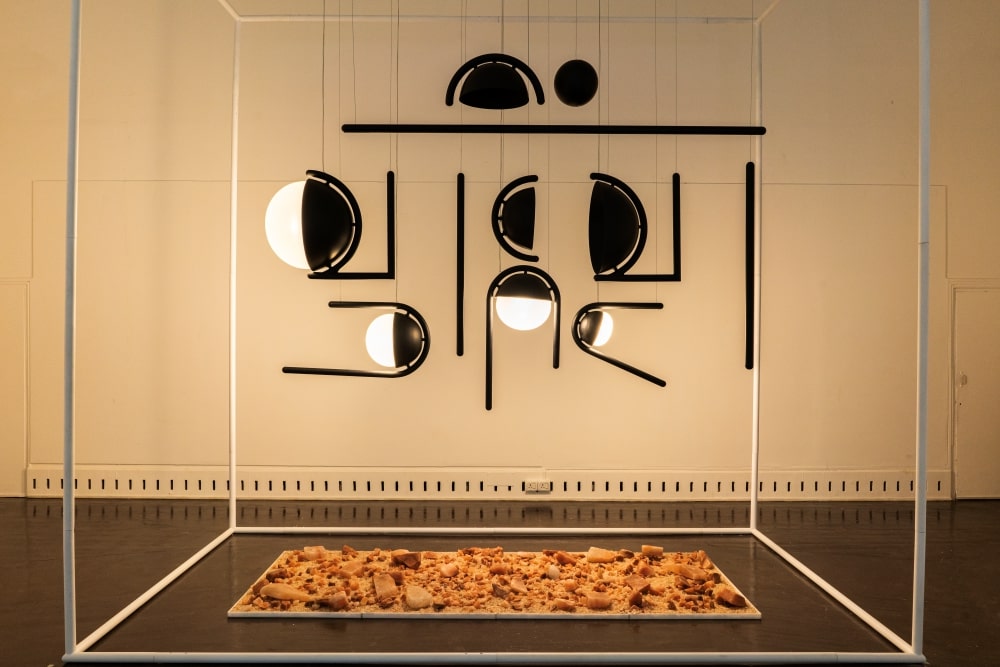 Artists reinterpret khadi in unconventional ways at this exhibition in Delhi

‘Swar Santati – An Artistic Tribute to Mahatma Gandhi ‘ brings a wide spectrum of artists together on one platform to understand the core of Gandhi’s philosophies and their role in today’s context. Conceptualized and co-curated by Lavina Baldota of the Abheraj Baldota Foundation, a social welfare organization, along with NGMA. Its starting point is khadi, which has found varied artistic expressions in the showcase.

For Baldota, it all started three years ago when she was working with textile designer Gaurang Shah on a series of khadi sarees. The idea was to create something rooted in history and relevant to India. Baldota put together a collection of 30 sarees with pallus featuring handwoven paintings by the artist Raja Ravi Varma using vegetable dyes. “Merging art and weaving seemed right,” says Baldota. Raja Ravi Varma’s paintings glorify sarees and its draping.

These 30 sarees are today a part of the exhibition. They also planted the seed of the idea to create the exhibition, with Baldota eventually inviting fashion and design luminaries to participate.

Artworks, installations, and memorabilia from private collections is part of the exhibition. Kishore Jhunjhunwala, a leading and avid collector of Gandhian objects, has contributed from his private collection, while poet Navkirat Sodhi pays tribute to Gandhi’s life and ideas through poetry. Product designers Prateek Jain and Gautam Seth of Klove Studio have created a light installation inspired by Gandhi’s salt march to Dandi.

Couture is also part of the showcase. Known for his structural gowns, designer Gaurav Gupta has interpreted ‘truth’ through an installation in khadi. “Gandhian ideals transcend generations and mediums. My aim through this exhibition was to experiment with different mediums and prove that his ideas can be embraced by everyone, and in many forms,” adds Baldota.

Others whose works are a part of the exhibition include Chennai-based embroiderer Jean-François Lesage. He has recreated meaningful lines through his impeccably done embroidery on handwoven khadi textiles – the idea embraces the thread as a medium to symbolise rural India in Gandhi’s journey.

The Indigo Revolt served as a theme for designer Rajesh Pratap Singh. His 8 ft. high and 10 ft. wide installation made with rusted nails and indigo khadi yarn pays homage to Gandhi’s philosophy. And architect Ashiesh Shah has reinterpreted various tenets of ‘Swadesi’ through his geometric art pieces.

The exhibition opens to the public on January 31st and will be on till February 9th at Indira Gandhi National Centre for the Arts, New Delhi

fashion exhibition Gandhi exhibition 'Santati – MAHATMA GANDHI THEN. NOW. NEXT Art exhibit Textile designers
Anupam Dabral
Sr. Associate Editor
It was while studying fashion journalism at London College of Fashion that Anupam developed a keen interest in the anthropological aspect of the discipline; for him, fashion only makes sense when seen in the context of its environment. He is always on the hunt for great stories, and in his spare time binge-watches films/shows starring Whoopi Goldberg, Dawn French and Jennifer Saunders.
Fashion Jewellery Style

Adding greenery to the garden city is Beruru, an outdoor lifestyle store in Bengaluru

New Year, New Home: 16 décor items to spruce up your abode for Diwali 2021