Home > Culture > Architecture > How many of these impressive Apple stores across the world have you seen? 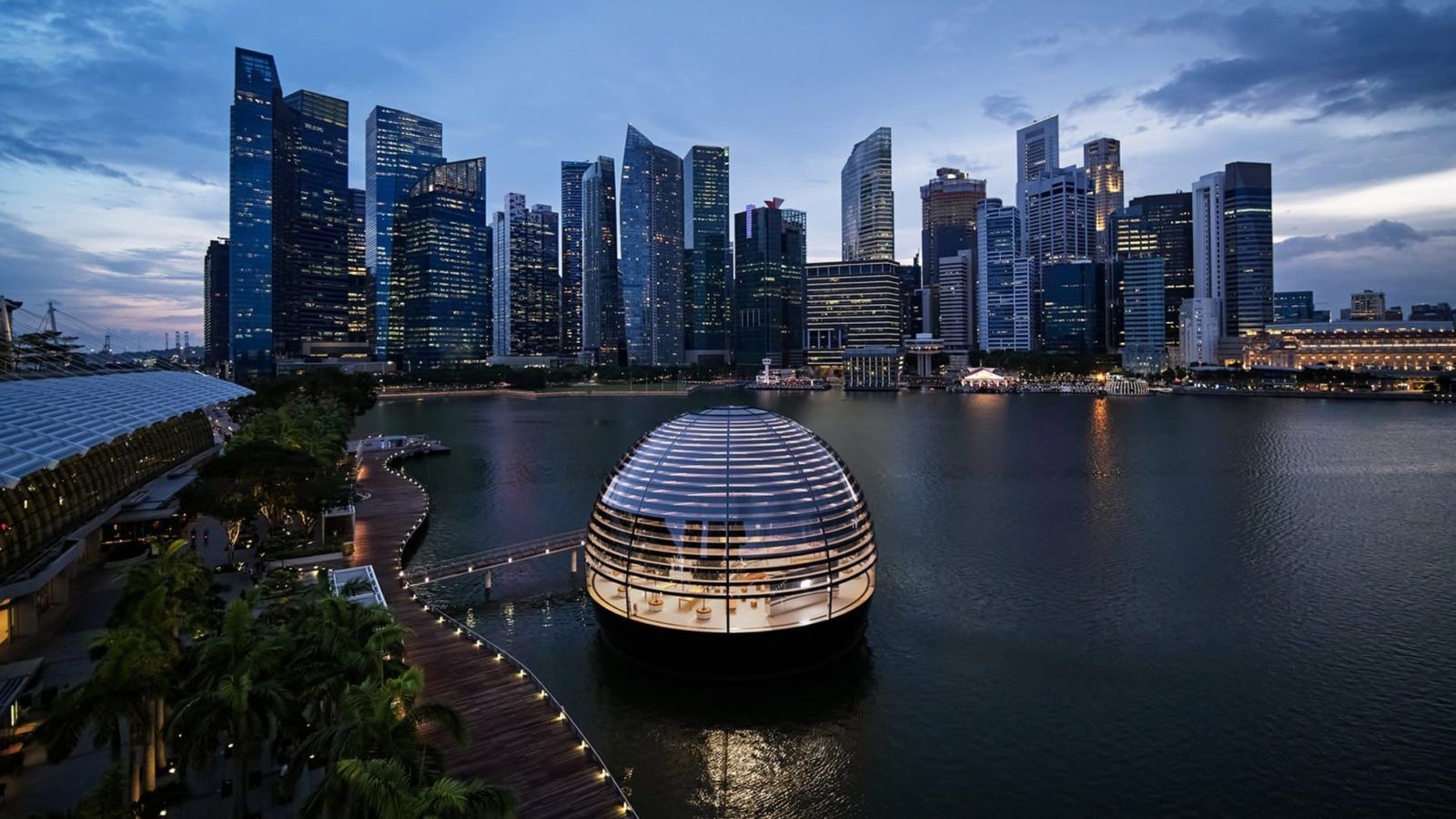 How many of these impressive Apple stores across the world have you seen?

Apple continues to woo customers with its intricately designed stores reinforcing the modern and traditional architectural elements. The smartphone brand is renowned for its uniquely designed outlets, be it in the US, Europe or Asia.

From its 512 retail stores across 25 countries, we have rounded up a list of some of the most stunning Apple stores that stand out for their aesthetically pleasing features with the amalgamation of progressive and traditional elements, which is emblematic of the brand.

Take a look at some of the most noteworthy and stunning Apple stores around the world.

Apple’s Fifth Avenue Store, famously known as the ‘cube’, is the result of a close collaboration between award-winning architect firm Foster + Partners and the design team at Apple led by Jonathan Ive. One of eight stores in the NYC, this store is an architectural marvel and features a 32-foot self-supporting glass cube and was reopened after renovations in 2019.

It is the only Apple store in the world that remains open 24X7, 365 days a year. The store features three entrances, skylights or skylenses arranged in a grid on the sides of the cube to flood natural light in and absorb solar energy, a spectacular circular staircase made of steel that reflects the skyline and lights, and a grand hall beneath the plaza supported by a ceiling made of 3-D curved fabric to match the changing tones of lights throughout the day and night.

The Regent Street Store is located in one of the most popular and busiest shopping streets in West London and was remodelled in 2016 to showcase the brand’s new design and ethos. This multi-level store was a Grade II listed historical facade (built-in 1898), now restored and designed in collaboration with Foster + Partners and features Carrara marble, hand-cut Venetian smalti glass tiles and an exterior of Portland stone.

The store features a boardroom for meetings with start-up and digital entrepreneurs where they can take guidance from Apple’s team, a mezzanine where visitors can get assistance from Apple’s geniuses and a forum for dynamic customer experience. The store also features the longest custom-made Luminous Ceiling Panels in the world that create a rich and ambient experience with the ability to absorb noise.

This store is located in a large open square within Sanlitun, an area within the capital city’s Chaoyang district. It is an iteration of China’s first Apple store and is built by Foster + Partners in collaboration with Apple.

It is twice the size and expanse of the previous version and designed like an envelope. The storefront has 10-metre-high glass panels to align with the theme of the store – open, accessible and inviting that blurs the barrier between the inside and the outside.

The key features include retail design upgrades such as Viewing Gallery to offer the vantage point for outdoor space, a dedicated Boardroom for meetings with local entrepreneurs and businesses, a Forum to showcase Beijing’s greatest creatives, first of its kind integrated solar roof array in a retail store in China to provide power to the store below.

Apple Piazza Liberty in Milan welcomes visitors with an 8-meter glass fountain at the entrance which serves as a backdrop to the massive outdoor amphitheatre. Located just off the Corso Vittorio Emanuelein in the heart of the city, the glass rectangular entrance is the most striking feature of this store.

The design is a product of collaboration between Apple’s design team led by Jonathan Ive and Foster + Partner’s team of architects. The immersive recreation of child-like excitement echoes through walking into the fountain without getting wet. The interiors feature bright space with backlit ceiling panels that let the natural light in and give the feel of a bright art gallery.

Apple Opéra Store in Paris retains most of its original architectural aesthetics, including wrought iron railings, marble floors, columns that stretch up to the ceilings and a large spiral staircase in the middle. Located near the Opera Garnier, it is considered to be one of the most beautiful stores in the world. It is strategically located near the well-known Pairs Opera and also has a bar upstairs.

A distinctive urban spectacle, Apple Marina Bay Sands is the brand’s third store in Singapore and sits directly on the waters of Marina Bay. The store made waves when it opened in 2020 with its unique glass dome structure that resembles a floating lantern.

It is designed in collaboration with leading architects from Foster + Partners and built inside a self-supporting floating sphere. The glass dome building is 30 feet in diameter and features 114 glass panels carefully selected and held in place with structural support from 10 vertical mullions.

The glass dome has sunshade rings to regulate the natural light that comes in and also provide acoustic absorption of ambient noise to create a calming atmosphere. The dome effect offers an exhilarating experience for visitors with 360-degree stunning views of the city and reflects light in the evening to enhance the Singapore skyline.

Apple opened its store on Rue de Rive in 2008. The unusually designed store is marked only by the steel sign of the backlit Apple logo. It opens to a wide stainless-steel panelled hallway flanked with product display counters and traditional wood display tables. It also features a distinct celling with rolling arches that sport a sleek and minimalist design.

Apple Store in Dubai Mall is a 186-foot storefront that overlooks the Dubai Fountain. Opened in 2017, this store reinvents the idea of a mall-based retail store with its falcon-themed design.

The store features ‘solar wings’ inspired by the movement of a falcon opening its wings — a one-of-a-kind marvel of kinetic art and engineering. The solar wings are reinforced with 340 carbon fibres polymer rods and 18 panels that demonstrate form and function, along with a visually appealing theatrical experience.

The store spans over two floors, and its innovative solar wings open during the evening to reveal the best views of the water-side fountain and promenade.

Opened in 2017, Apple Schildergasse features the latest design that is adopted by other Apple stores across the world. This thoughtfully incorporated new design layout includes a Forum for displaying local artists and creatives, a Boardroom for meetings with local entrepreneurs and businesses and a Viewing Gallery.

Located in one of the busiest shopping districts, it features a suspended glass staircase and attracts around 13,000 visitors per hour. The store’s Viewing Gallery offers a breath-taking view of the Cologne Beer Fountain made by artist Harald Frehen.

Opened in 2020, Apple Central World in Bangkok is the brand’s second retail store situated at one of the city’s iconic urban centres Ratchaprasong shopping district. Featuring a distinctive design, the new store has been built in collaboration with Foster + Partners through two other local entities F&P and Architects 49 Ltd.

The store features an 80-foot glass enclosure with two levels connected via a spiral staircase supported by a cantilevered Tree Canopy roof. The staircase wraps around a central timber core made of 1,461 European white oak profiles. The glass enclosure in the form of a drum offers dramatic 360-degree-views of the outside urban scenery. 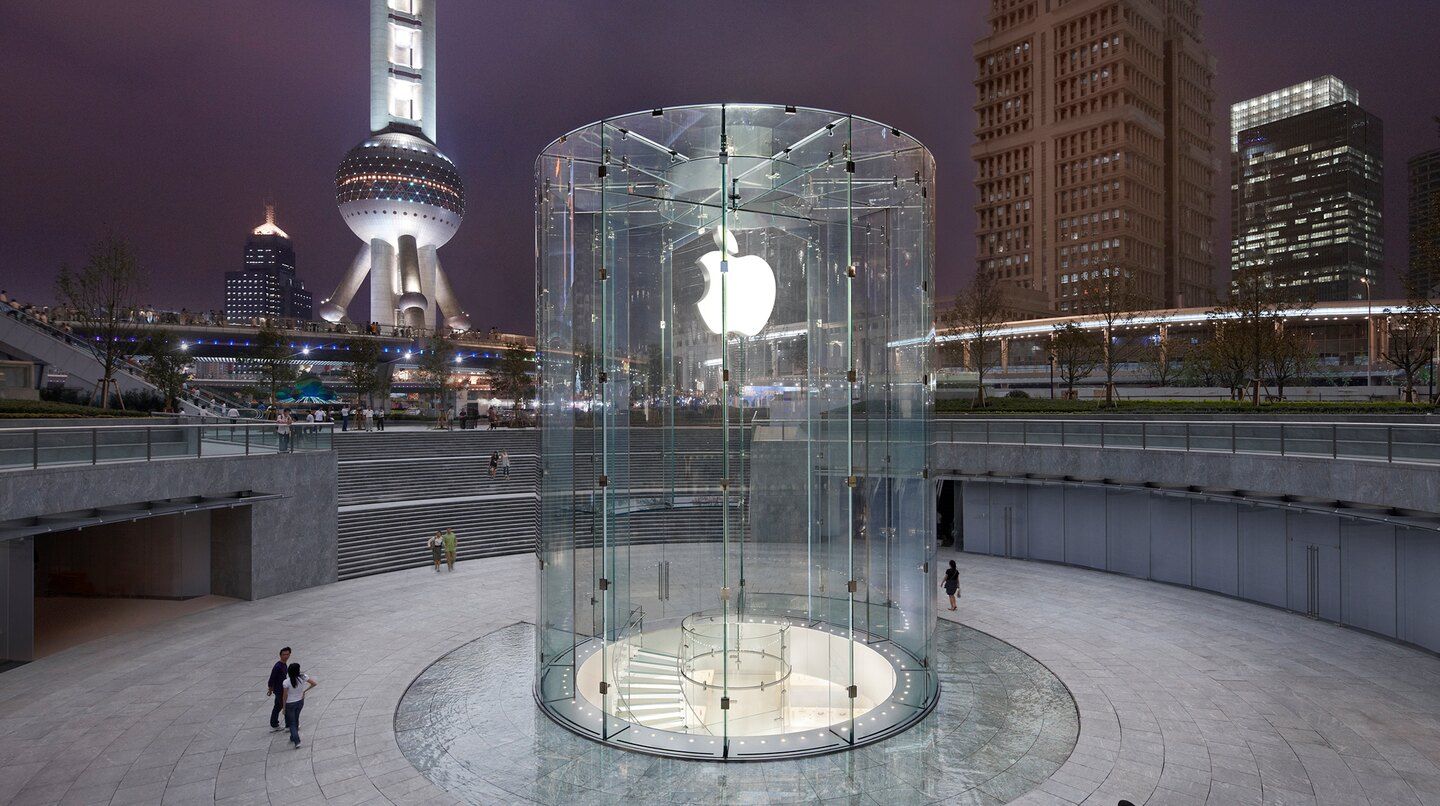 Situated in the Pudong district of Shanghai, this is one of the most iconic and remarkable Apple stores. A massive glass cylinder stretches up out of the ground, with the main store located underneath.

Featuring 16,000-square-feet of space, the store has been designed by Bohlin Cywinski Jackson Architecture, who also designed the archetypical Fifth Avenue Apple Store in New York.