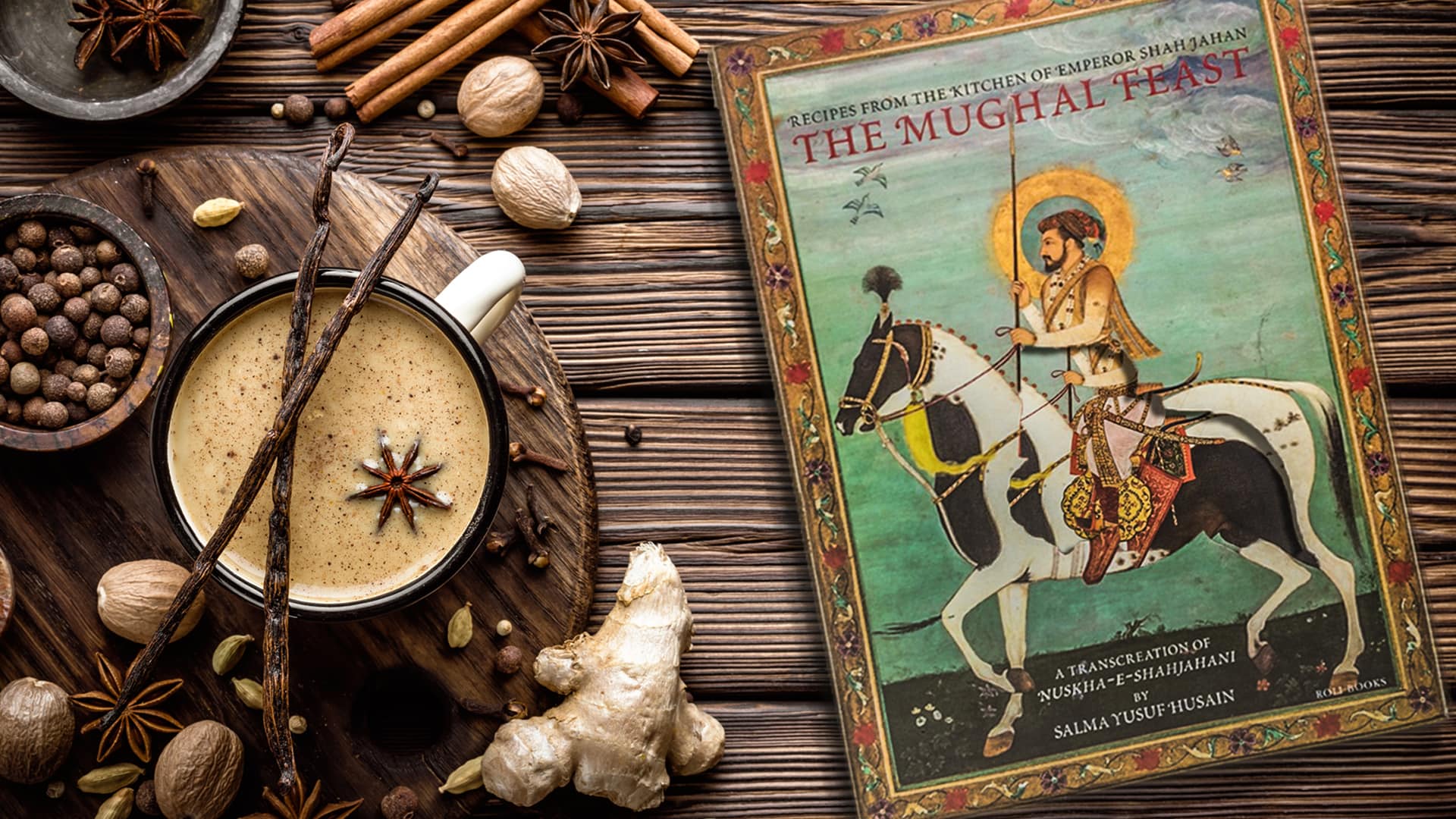 Mughal emperor Shah Jahan’s patronage of literature, architecture, poetry, and music is well known and chronicled. What’s lesser known is his love for good food. Known to have hours-long ceremonies for his daily meals and a kitchen entourage of a few hundred, who were constantly experimenting and innovating, the culinary crafts hit a high under his reign. And throwing light on the recipes of that era is food historian Salma Yusuf Husain’s new book ‘The Mughal Feast’.

Printed by Roli Books, the visually captivating book is a transcreation of the manuscript ‘Nuskha-e-Shahjahani’, which details the goings-on of Shah Jahan’s kitchen. The book contains recipes beautifully interspersed with Mughal miniature paintings, the cover being a print of Shah Jahan on a horse, holding a spear. Others paintings include that of Aurangzeb reporting to Shah Jahan in the Lahore durbar, the delivery of presents for Dara Shikoh’s wedding, Shah Jahan hunting as he rides an elephant, and such.

As it is a translation of the manuscript written in Persian, the quantities in the recipes haven’t been changed, neither have the ingredients. So expect to find dishes that serve 20 people, and ingredients such as cinnabar (shangharf) — mercury in red-brick form. Of course, there are disclaimers and suggestions for alternatives, as well as preparations that feed 4-6 people.

“Anybody who cooks has the faintest idea of the quantities,” says Husain, for whom maintaining the sanctity of the original text was important. The book also highlights the Mughals’ preference for everything sweet – even kebabs were dipped in sugar syrup, but as Husain puts it, the emphasis was “to showcase that [authentic] Mughlai food can be cooked today”.

A postgraduate in Persian language and literature, Husain has been studying the food and eating habits of Mughals for a while now, and what intrigued her was that if “we’re fascinated by Mughlai cuisine even centuries later, then there must have been something special about it”. And so her search began. From Patna to Hyderabad, Delhi to London, it was long trek that led Husain to ‘Nuskha-e-Shahjahani’.

Husain has been entrenched in the world of culinary arts for a while, having been a food consultant with ITC for 20 years. Ask her about her favourite dish and pat comes the reply: “Amba Pulao”, which is rice with mango and lamb. She also loves the Do Pyaaza Shirazi, a dish that can be cooked in half an hour, perhaps the shortest duration for a Mughlai preparation. These, and many more authentic recipes across the seven different sections of the book are a window into the culinary gems that were developed under the Mughal rule.
Books Authors New Launches Mughlai Cuisine Food Books Recipe Books
Megha Uppal
Senior Associate Editor
An innate love for travel and food has translated into many a trips since childhood for Megha; it also fed her curiosity to know about local cultures. When not writing, she is on the lookout for three things: A great dark chocolate dessert, a beautiful pool where she can practice her backstroke, and art that she can save up for.
Travel Culture Food Drinks

How Kika Tableware is elevating your at-home dining experience

The coolest décor stores in Bengaluru for bespoke interiors