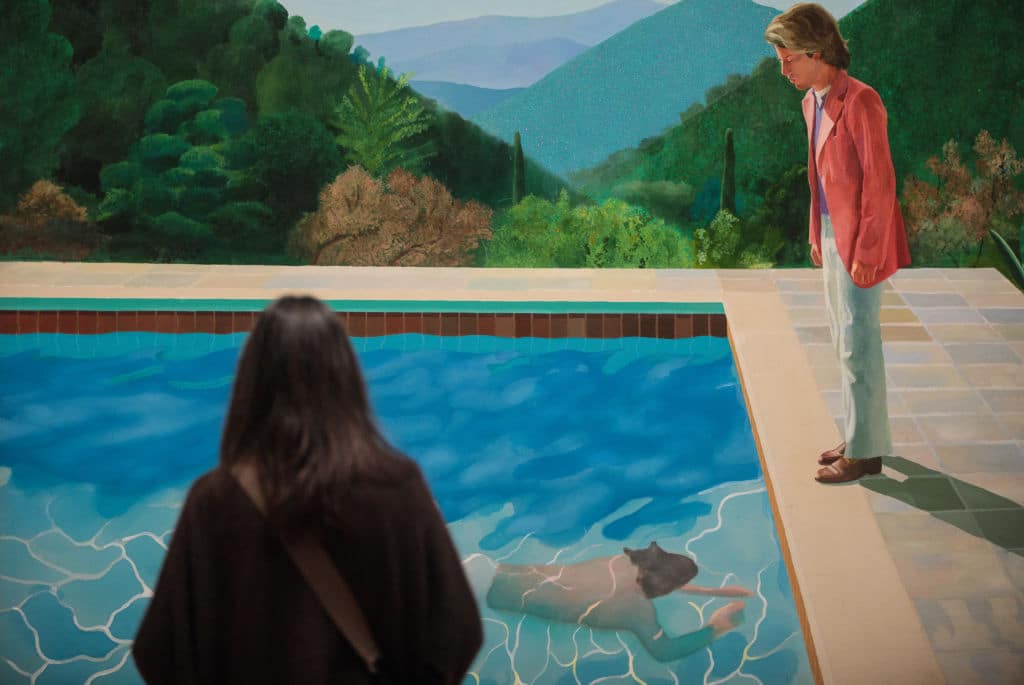 The year is 1972. ‘Portrait of an Artist (Pool with Two Figures)’ by David Hockney sells for USD 18,000. Almost half a century later, it’s auctioned for more than 5,000 times its original sale, a record-breaking USD 90.3 million. It now holds the distinction of being the most expensive artwork by a living artist ever auctioned, and symbolises the churning wheels of the art industry.

Christie’s New York auction this Thursday saw the British artist’s work beat the previous record held by Jeff Koons for his ‘Balloon Dog’ installation, at USD 58.4 million, by a vast margin. While the identities of the seller and buyer, as is customary, have not been revealed, the story behind Hockney’s artwork has been well documented over the years. Said to revolve around his breakup with American artist Peter Schlesinger, the painting was imagined from two different photographs — one of Schlesinger and the other of a swimmer — Hockney saw lying on his studio floor. He liked the idea of painting two figures in different styles and started working on the canvas, Schlesinger being the standing man in the pink coat. However, six months and several background changes later — from mountains to walls — he scrapped the first version and started all over again, this time with British film director Tony Richardson’s house in south of France as the backdrop.

Hockney’s website describes the painting as “particularly labour intensive and emotionally harrowing”. Completed in a short two weeks, it was first displayed at New York’s André Emmerich Gallery in the same year as it was painted. It was shipped just the night before the exhibition. “I must admit I loved working on that picture, working with such intensity; it was marvellous doing it, really thrilling,” Hockney has said about the experience.

Paintings, drawings, digital works, sketches, photography, stage design, Hockney has dabbled in diverse arts over the years. Influential in the pop art movement of 1960s, the 81-year-old artist has worked extensively on painting of private swimming pools he saw in Los Angeles and double portraits of those close to him in the late 60s and 70s. With both signature styles appearing in his now record-breaking piece of art, it makes the painting all the more prized.
Today, the piece is considered one of his best works. “We rarely can say: ‘This is the one opportunity to buy the best painting from the artist’. This is it,” Ana Maria Celis, Vice President of Postwar and Contemporary Art at Christie’s, said before the auction. It is speculated that ‘Portrait of an Artist (Pool with Two Figures)’ was sold by the British billionaire Joe Lewis, who is known for collecting postwar British art.
A living artist’s work, carrying the theme of homosexuality, shattering auction records showcases a new turn the art industry is taking. Hockney may be one of the most celebrated artists today, but his artwork nearing the 100 million mark was an unimagined feat until now. The change is also reflected in artworks of women and African-American artists sold at this week’s Christie’s and Sotheby’s auctions. Closer home, Sotheby’s India is set to hold its first auction in South Asia, ‘Boundless: India’. This will present artworks of Indian and South Asian artists, and also few from the West — but the focus on local Asian art is a testimony to the art landscape growing to accommodate varied entities and ideas.

Art Christie's Painting David Hockney Auction Records Pop art
Megha Uppal
Senior Associate Editor
An innate love for travel and food has translated into many a trips since childhood for Megha; it also fed her curiosity to know about local cultures. When not writing, she is on the lookout for three things: A great dark chocolate dessert, a beautiful pool where she can practice her backstroke, and art that she can save up for.
Travel Culture Food Drinks