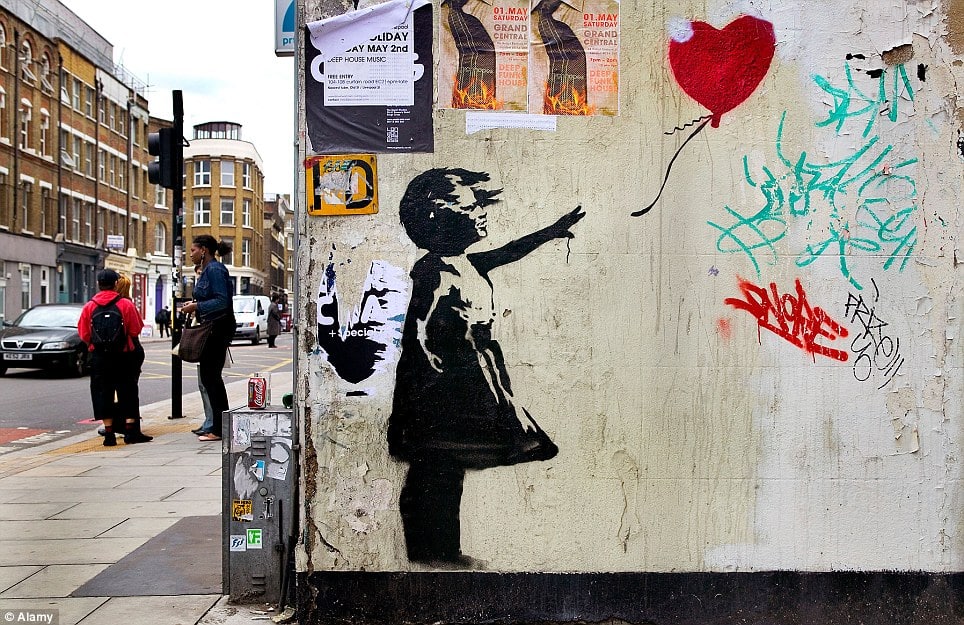 In 2002, a mural of a little girl releasing her balloon mushroomed overnight by the wall of a shop in East London. It was quick stencil work, done in stealth but with care by an elusive artist.

This would be Banksy’s most iconic work. The ‘Balloon Girl’ offered a simple depiction of lost hope, a refreshing break away from cryptic contemporary art and lauded by critics and audiences alike for its approachability. It became one of the most sought-after urban artworks: the actual mural and wall was sectioned off and sold for £500,000 and prints for a fraction of that.

And on 5th October 2018, such a canvas print bearing the same image was rendered to shreds right after going under the hammer during at Sotheby’s auction. It would have gone for a cool £1.04m, the highest record set for the anonymous artist.

Among shock in the auction room that night, Banksy revealed on Instagram that he had installed a shredder in the gold ornate frame holding the painting years ago. If it was ever auctioned off, he would switch the mechanism on remotely.

. “The urge to destroy is also a creative urge” – Picasso

It was a flip off, a call to anarchy, at the art market. Critics cheered at the action. Art history was made here. In a twist of irony, the shredded piece would also now be worth double — or even more — following this momentous occasion.

This, however, is not Banksy’s first time poking fun at the commodification of his art. In 2014, Sotheby’s auctioned off Banksy’s I Can’t Believe You Morons Actually Buy This Shit, which proved not only ironic but also prophetic in current circumstances.

Garnering controversy is his game, and Banksy has no qualms going all the way with his works.

Banksy first surfaced as a freehand graffiti artist in 1990. He later took to stencil work as it was a faster way to complete his work and easier to get away from the police on the lookout for vandals.

Since then, the use of stencils in Warhol-esque fashion has become his signature style. As with most graffiti, his works are site-specific and often weaves in public property through humourous ways.  Murals are typically done in black and white paint, though occasionally employing another colour to drive home the messages in his work.

While his works are meant to poke fun, they are also caricatures of real-life social issues and often revolve around themes on anti-war and anti-commercialisation.

Banksy was not limited to just graffiti works and has dealt with installation art as well. In 2015, the artist converted an abandoned swimming pool complex into an amusement park-themed art exhibition. Called Dismaland (a depressing take on Disneyland), the pop-up saw works from more than 50 artists and was solely funded by Banksy.

And perhaps the most ambitious of all is The Walled Off Hotel, an actual Palestinian lodging property located by the Israeli West Bank barrier. The luxurious-looking hotel is filled with works from the artist, together with rooms inspired by army bunkers (for those on a budget) and plush suites (live like a corrupted leader, for those who have deep pockets).

It was controversial, no less. The installation drove criticism on trivialising deep-rooted political issues between Palestine and Israel. But it also brought to light how unabashed Banksy can be in his art.

Following Banksy’s popularity and commercial success, more attention was drawn towards graffiti and urban art. Sotheby’s, Christie’s and other renowned auction houses started to welcome such artworks in their stable of lots in consideration of growing demand among collectors.

This in turn also granted the art form its much-needed legitimacy in the art institution, giving rise to new establishing graffitists looking to establish the same, or similar, reach to Banksy. Or, at very least, get commissioned for works and support from galleries.

Yet, what he has intentionally or unintentionally built up, Banksy intends to disrupt. Whether he continues to defy the art market by selling his works for US$60 in New York (an actual stunt he pulled in 2013) or by shredding more of his works up, Banksy’s shock value will only go to make him even more popular in auction houses.

Sotheby's Graffiti Banksy art installation Urban art
Jasmine Tay
Senior Writer
Jasmine Tay is the dining, culture and jewellery writer. She makes fine silver jewellery and causes mini-explosions in the kitchen when she can't afford fancy dinners. Sometimes she tells people what she thinks about art, and binges on the music of Danzig when they don’t agree.
Dining Culture Jewellery

Code Silver – a perfect amalgamation of tradition and modernity

Bring in 2021 with these wonderful planners from homegrown stationery labels