If you walked into The Chanakya today, or any day until Dec 8, you’ll find the café area in the atrium changed drastically. Instead of tables and sofas and uniformed staff bussing tables, there stands an enclosed structure. With a curved upper façade and white walls, beyond the red velvet ropes of its entryway stands a beautifully illuminated, calligraphed ‘R’ and ‘H’. This is the Rouges Hermès exhibition in Delhi.

Step inside and it’s a bit like walking through a simplified maze of five rooms, each housing artefacts that are loosely tied together with a theme, although the strongest one is noticeable immediately. It is the colour red. All 81 objects, ranging from modern-day scarves and ties, an old book, stuffed toy, and fly bonnet, to 18th and 19th-century writing cases, are all in different hues of the fiery shade.

The Rouges Hermès exhibition is an ode to the brand’s love for the colour red, which became its intrinsic part ever since Emile Hermès, the person credited with changing the maison’s creative vision, developed a process to dye box calf leather with the help of skilled artisan tanners in the early 1920s. Every artefact at this travelling exhibition – it comes to India from Bangkok and Jakarta – tells the story of how that red colour wheel grew and the inspirations behind it. There are around 20 shades, from vermilion and magenta to bright and soft reds.

Style
Hermès has collaborated with an Indian artist for their store at The Chanakya, Delhi 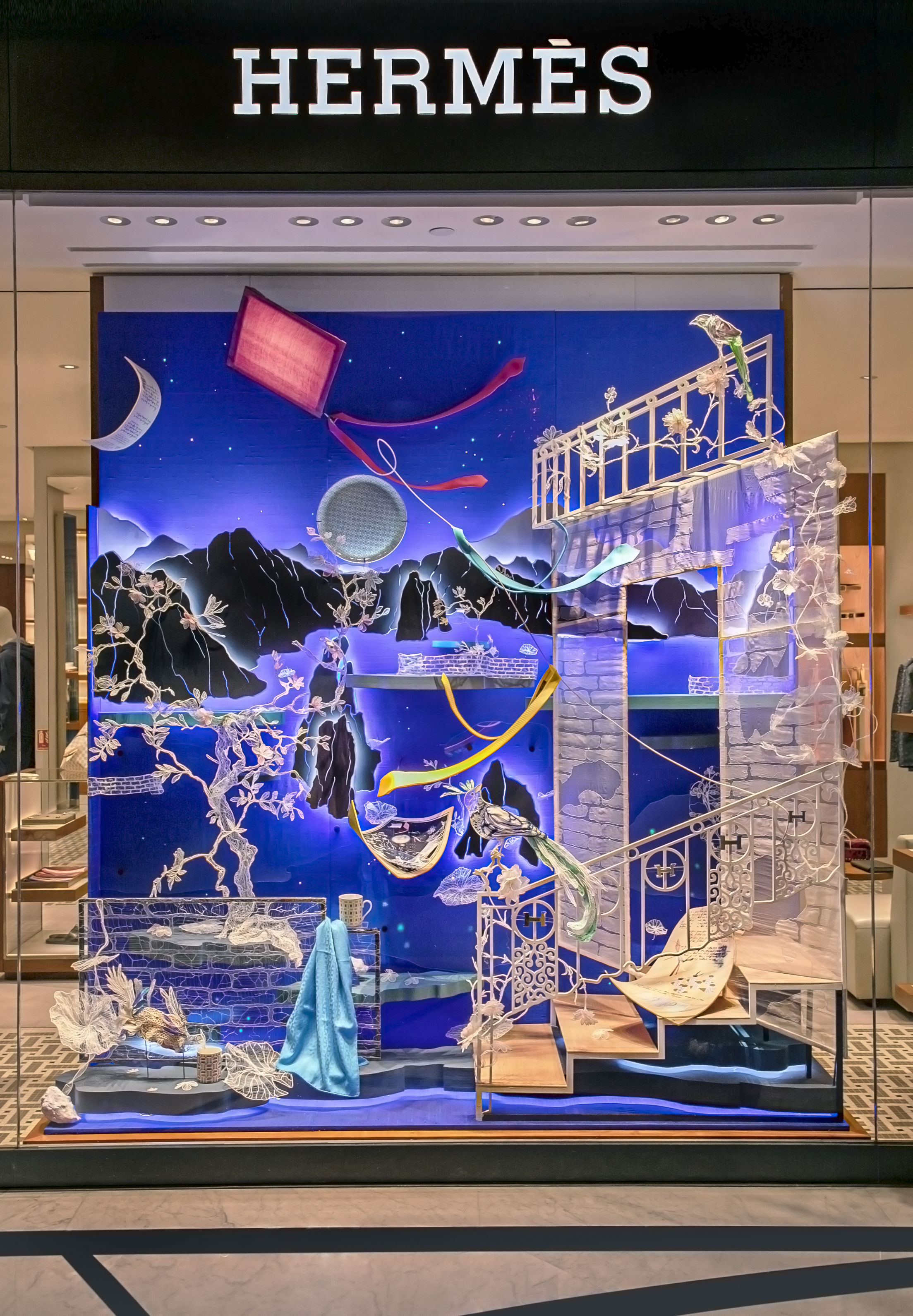 “Red is a universal colour – it is a symbol of life, love, passion, energy, action, movement – but it had a special place for Emile Hermès, who was a visionary. Red was a traditional colour, associated with a rich way of life, the French cavalry etc. The house had even made a red harness for the Emperor of Morocco’s horse. When Emile wanted to diversify the activities of the company [from saddlery] to a new way of living, red naturally came to his mind. He wanted to reinvent it,” says Menehould de Bazelaire du Chatelle, artistic director of the Cultural Patrimony of Hermès. “When we started exploring Hermès’ relationship with it recently, we found 40 different hues and nuances of it. It was a keen discovery of our relationship with not just red, but reds.”

With Hermès for more than 30 years, du Chatelle is the custodian of Hermès rich heritage, with a deep understanding of everything that has influenced and continues to influence the brand. Under her direct supervision is the eponymous, mysterious (because few are allowed access to it) Emile Hermès Collection, a lifetime of treasures that creative tour de force amassed. Hand-picking pieces from this private collection, along with those from Hermès’ archive, i.e, Conservatory of Creations and Contemporary Collections, du Chatelle worked with Pierre-Alexis Dumas, artistic director, Hermès, and Bruno Gaudichon, curator, for three years to bring the exhibition to life.

In the exhibition’s ‘Original Crimson Room’, you’ll find the exquisite 1995 ‘Flamboyant’ vase with its luminous red pigment made with gold, created in collaboration with Saint-Louis crystalworks, along with two maroon writing cases from the 18th and 19th century that Emile Hermès found. In the room ‘The Invention of a Deep Red’, one sees how the brand worked with the Combe tannery in the early 20th century, to dye leather red – proofs are the 1920s golf bag and vanity set on display. Other displays include bags – we loved the 1953 gold-plated brass Museliere in marsala, a pocket watch designed with Movado (1928) with a red cover, a majestic Rouge Hermès perfume bottle (2000), a Marc Newson designed pen (2014), and even a chewing gum holder (1983). The pieces de resistance, however, are the gown in a ‘Jupiter’ red designed by Claude Mouret for FW 1995, inspired by the riding suit that once belonged to Emile’s wife; and a limited edition 2016 jewellery cabinet featuring secret compartments, a central mirror, and LEDs, all trimmed with red leather.

The Rouges Hermès exhibition in Delhi is a great platform to understand Hermès’ evolution, themes, colours, and patterns, and what makes it one of the most iconic fashion houses in the world. Better still, it is a rare and intimate look at certain creations and artefacts that are otherwise inaccessible to the public.

Pantone’s colour of the year for 2023 is Viva Magenta

From glittery ornaments to wreaths: Best Christmas decor ideas for this holiday season

Renowned Southeast Asian furniture designer brands to watch out for