Will ‘Bunty Aur Babli 2’ recreate the magic of the legendary original movie?

Culture
Will ‘Bunty Aur Babli 2’ recreate the magic of the legendary original movie?
Share this article
Next article

With Bunty Aur Babli 2 slated to release on November 19, 2021, we are nostalgic. While Bunty Aur Babli was a rage back when it was released, will the sequel be as engaging? Let’s find out.

16 years ago, Shaad Ali’s black comedy blockbuster, starring Abhishek Bachchan and Rani Mukerji, was released. A story about two notorious con artists who thrived on stealing from others while weaving their own love story defined a new theme for Bollywood in the noughties and gave Abhishek Bachchan an unexpected hit. Today, the iconic movie gets a remake, starring Siddhant Chaturvedi (of Gully Boy fame) and Sharvari Wagh (making her Bollywood debut). Now, we will have to wait and watch if the new Bunty Aur Babli does justice to the OG hit.

What to expect from Bunty Aur Babli 2

While the first film created a brand and brought about a revolution in the fashion circle in India, it would be interesting to see what the sequel has to offer. The film revolves around two con artist couples from different generations and how they clash in a battle to prove who’s the best.

The trailer opens with the retired con artist couple (Saif Ali Khan and Rani Mukerji) living a normal life in a small town, everything that Rakesh (Khan) did not want for himself. They go about doing the menial chores of domestic life and have visibly put on a few extra kilos, which goes on to show that they are content with the domestication of their lives and are the picture-perfect ‘happily ever after’. They even have a son and from the looks of it, they are trying to lead a good example for their son.

But everything changes one day after they are arrested when the police inform them about robberies and frauds committed by Bunty and Babli.

Soon they realise that someone else is using their name and the past that they had left behind, to con people and make money. That is when the original Bunty and Babli set out to do what they do best and prove that no one can beat them. The new generation con artists, played by Siddhant Chaturvedi and Sharvari Wagh, are what audiences are looking out for. Will they recreate the magic and carry on the legacy of Bunty Aur Babli?

On the other hand, the Saif-Rani casting has always weaved magic on screen and has never gone wrong. Last seen in Thoda Pyaar Thoda Magic in 2008, fans are excited to watch this Hum Tum pair on screen again and recreate the fiery chemistry.

Culture
If you love travelling, these 6 travel movies are a must watch 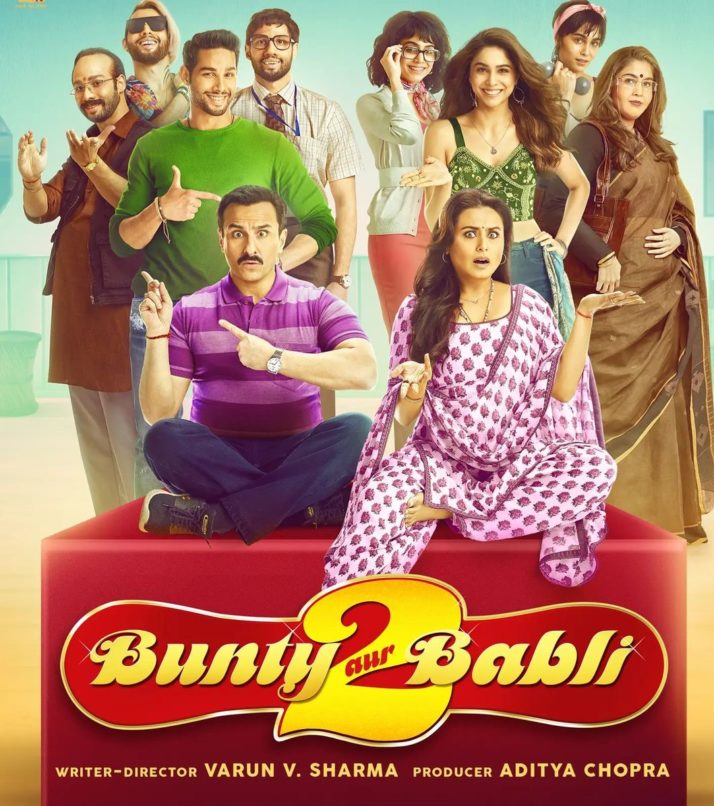 Saif Ali Khan plays the role of Rakesh, a ticket checker in the Indian Railways like his father. He is also the original Bunty, who has retired now to live a normal life. Rakesh was originally played by Abhishek Bachchan, who brought innocence and dry humour to the role. Will Saif fit into the character effortlessly and give us the riot that Bunty and Babli were?

The OG Babli has also retired from conning. She lives a middle-class life in a small town with her husband and son but is still the chirpy and feisty Vimmi that we had seen 16 years ago. Rani Mukerji was last seen in Mardaani 2 in 2019, playing the role of a tough cop. Being the powerhouse of acting that she is, it would be a delight seeing her morph into Vimmi once again.

The new Bunty of the new generation, Jai lives a life of conning people and living in luxury. Chaturvedi is probably the most promising newcomer we’ve had in a while. Having debuted in Gully Boy in 2019, he stole all the limelight and was highly applauded for his acting skills. With upcoming films like Phone Bhoot and Kho Gaye Hum Kahan in his kitty, it would be interesting to see how his career pans out.

The new Babli, Sharvari Wagh marks her Bollywood debut with this dark comedy. The granddaughter of the former Chief Minister of Maharashtra, Manohar Joshi, Sharvari was first seen in the Amazon Prime web series The Forgotten Army- Azaadi Ke Liye in 2020.

Pankaj Tripathi has never had a dull moment on screen. He plays the role of a police inspector who is determined to catch the real Bunty and Babli, similar to Amitabh Bachchan in the original film. Pankaj Tripathi has gone on to become the face of the Indian OTT space with several films and web series in his career, like Gunjan Saxena, Mimi, Ludo, Sacred Games, Mirzapur and so on.