Home > Culture > Entertainment > Who sits on the Iron Throne? No one, says season finale, and we get it 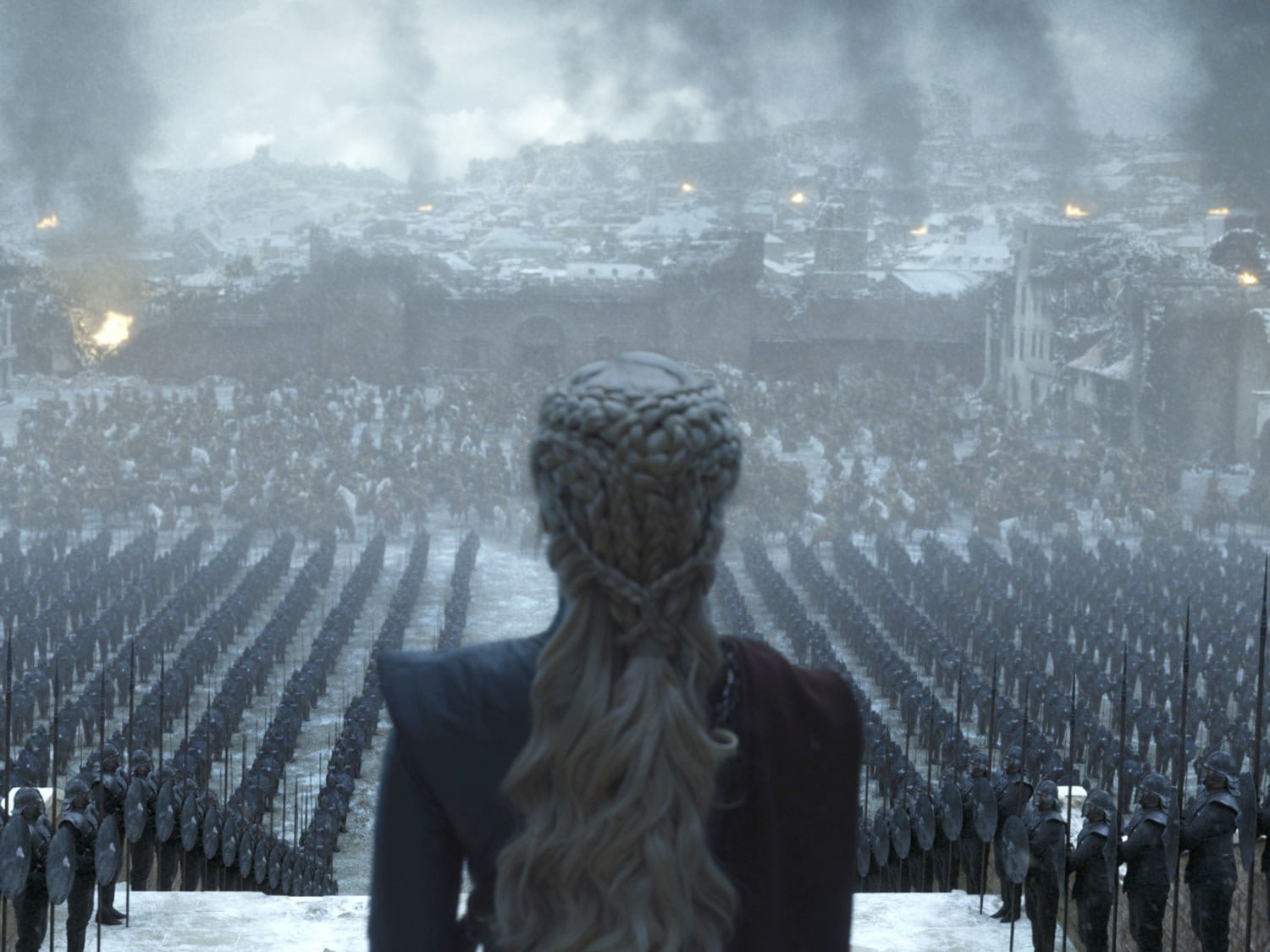 Who sits on the Iron Throne? No one, says season finale, and we get it

Culture
Who sits on the Iron Throne? No one, says season finale, and we get it
Share this article
Next article

If there was one thing that stood out about the Game of Thrones finale, it was the lack of action and the unending dialogues on duty, love, and mercy. If you ask us, it was needed after last week’s mayhem that Daenerys put us through in the fiery destruction of King’s Landing. In this episode, you see Dany emphasising that she can’t hide behind small mercies while Jon pushes for it. And that’s what David Benioff and DB Weiss gave us. An ending that was merciful. Of that we’re sure.

At the beginning of the episode, even after King’s Landing is torched, a rousing speech by the Targaryen girl, promising liberation for everyone from Winterfell to Dorne to Qarth to the Summer Isles and the Jade Sea, has her army extend unconditional support. The speech had spunk, ambition, and unrelenting madness – traits that are synonymous with the series. Right from the execution of Ned Stark to the Red Wedding to Jon’s death and ressurection to the Battle at Hardhome, everything in Game of Thrones has been larger than life, more than unexpected. So no ending would have really satisfied our thirst for a good resolution. The pressure on the makers was way too high.

Plus, who hasn’t had a whiff of fan theories (no matter how hard you tried to avoid, someone must have run their thoughts past you)? Leaks and alternate endings did their bit to kill any surprise that we could have expected. Think about it: If Dany or Jon sat on the Iron Throne, you’d have rolled your eyes and done a ‘I told you so’ dance.

There are many a disgruntled internet fans right now who are demanding a season finale re-do (yes, we admit the death of Dany was unspectacular), but let’s just for a moment think about what we got. Passion, intelligence, power, and mayhem – all hallmarks of GOT, and a tepid ending like this can only blamed on exhaustion at the end of this spectacular journey. But we will try to be merciful (because that’s the raging theme right now) to the team that made it happen – the excellent vfx, the writers who gave us Drogon and his siblings, the stylists who created costumes, and the scriptwriters who ruled our minds for almost nine years.

We did love certain things about the episode. First, Dany, who appeared on the screen, amidst the ashes with Drogon at her back, resembling an angel of death. Then, the rousing speech, the adulation, and the khals throwing up their weapons in hurried emotion. The smaller moments that stood out included the dialogue between Daenerys and Tyrion; the long, exhaustive conversation on duty and love between Tyrion and Jon; and the smaller, humorous sparring between Ser Bronn and Davos. And Tyrion emerging as the real hero – twisting and creating history even as he believes he has nothing to offer. Fitting we feel – he is, after all, the glue that kept the series smart and clever. “Love is the death of duty,” seems to be refrain now, and we can see that this punchline living forever in memes.

We enjoyed the moments with Drogon too – how he looks at Jon after the latter has plunged his knife into Dany, and how his anger melted the Iron Throne, symbolic of the fact that the penultimate episode was never really about who sat on the Throne, but more about giving the remaining characters their dues. Arya signs off as a discoverer, off to new lands, and refusing to fit a mould. Sansa of House Stark now sits on the independent throne in the North (because hell hath no fury like a woman scorned, abused, and treated like cattle). The melting of the Iron Throne also symbolises that power resides where people live well. One thing is for sure – it does not reside at King’s Landing anymore (we’re thinking Winterfell).

Various storylines have been tied up for the good of the realm – Bran becomes the ruler, the Tullys (hello, Robin Arryn), Yara Greyjoy, and even a Dorne representative come together to show that they’re alive and faring well. The only loser here is Grey Worm – torn between his queen’s death and the new rulers, and his move to the Island of Naath is symbolic of the only place he will find peace. The ending – with the group of misfits choosing democratic rule, the King’s hand and his council debating the financial outcome of the land, and Ser Bronn armed with jokes and clever comebacks – it might not be the ending we want, but hey, it’s the ending we need. And we didn’t miss the irony in Ser Bronn’s statement when he said, “The strong live and the weak won’t,” because the finale of GOT showed us anything but. The weak survived, the strong perished. And the Stark family proved remarkably resilient, something we would have had a hard time believing in Season 2 or 3.

That said, the final season of Game of Thrones has been nothing short of controversial. And as you already heard, the fan clubs of Game of Thrones are disappointed with the eighth and final season and now, there’s a petition floating around that has a million and more signatures asking HBO to remake the final season. But we at LSA have an alternate theory – we don’t want a remake, we want a spin-off. Not one, maybe three. Sansa’s story could be filled with masterful twists in the North, Arya’s adventures can pave a new path, and Jon leaving Castle Black with Ghost – who knows, he might find love again, with Tormund sticking around for clever punchlines, undying loyalty, and brawny escapades.

The series has been an eye-opener for all things magical, powerful, passion-filled, and political, and no show gave us that as much as GOT. It was time to take that power away and give it a graceful ending – sort of like Valar Morghulis meets mercy. In the Game of Thrones, you win or you die, and this ending does neither, so you move on with the good memories and smart dialogues you can quote whenever you want.

Game of Thrones Daenerys Targaryen game of thrones merchandise game of thrones finale Iron Throne Jon Snow
Latha Sunadh
Deputy Editor
When she's not trying on a new serum, researching on yet another classic fragrance and sharing lip balms with her 5-year old daughter, Latha Sunadh keeps it reined in with a nice song and a good book. Special skills include obsessing over handmade, home-made and handcrafted luxuries.
Beauty
Sign up for our newsletters to have the latest stories delivered straight to your inbox every week.