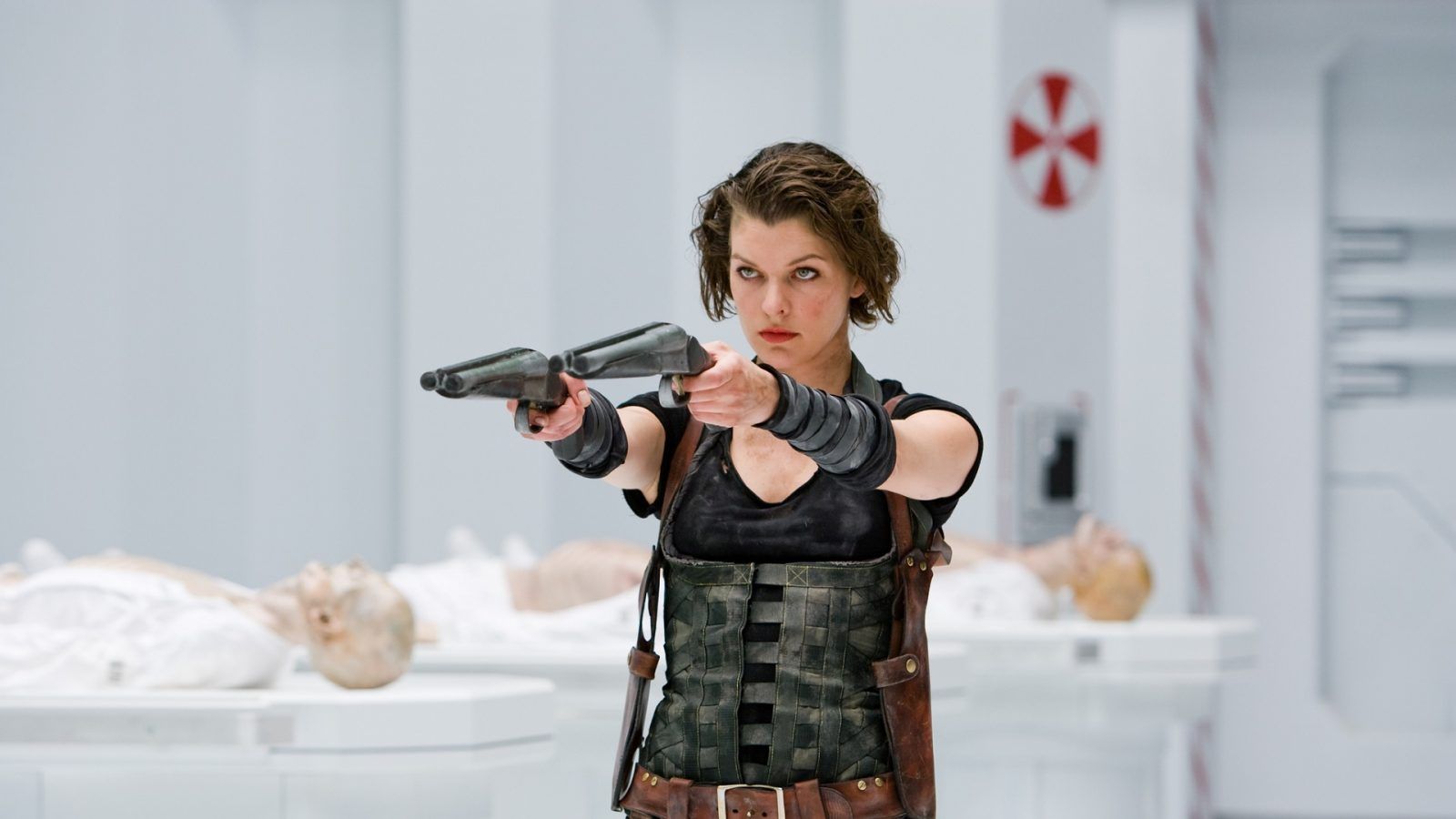 Resident Evil is one of the most famous video game franchises of all time. The zombie horror world it created has a fan following of its own. Other than the numerous games, there are 12 Resident Evil movies and shows, which, in a chronological order, would help even those who haven’t played any of the games clearly understand the core storyline.

Together, the six films are also known as the original series but their storyline is not connected to the story in the games. In fact, Anderson created several original characters exclusively for the films. Despite this, all of them were poorly received by critics and fans.

Outside of the original Resident Evil series, the movies and TV shows include a rebooted film, three computer-generated (CG) animated films, one animated miniseries and one live-action TV series. However, barring two CG animated films, none have been successful with fans or critics.

Yet all of them make for an interesting watch for die-hard zombie horror fans. So, for those who want to know how and where to watch them, most of the films and TV shows are available across streaming platforms such as Netflix and Prime Video besides YouTube.

Here are the Resident Evil films and series in chronological order

Essentially a reboot, Resident Evil: Welcome to Raccoon City is the most recent film in the series. But the singular reason to watch this movie before the others is that it is closest to the original storyline of the gaming franchise, and shows a Raccoon City just before things turned horribly wrong. Chronologically, it also marks the first live-action appearance of some of the most prominent characters from the game.

The origin story begins in the early 1980s when its protagonists, siblings Claire Redfield and Chris Redfield, are in an orphanage. Years later, in 1998, a grown up Claire (Kaya Scodelario) reunites with Chris (Robbie Amell), who is now a leader of a special force, in the city. But they soon find themselves trying to survive as the infamous Umbrella Corporation or Umbrella Corp, tries to contain the outbreak of a virus that is turning people and animals into zombies. The siblings are joined by a diverse group of well-trained personnel, including Chris’ special force partner Jill Valentine (Hannah John-Kamen), a city cop Leon S Kennedy (Avan Jogia) and a double agent Albert Wesker (Tom Hopper).

The film follows Alice, who has partially lost her memory, inadvertently getting pulled into a highly secure underground facility in Raccoon City by a group of special military units from the Umbrella Corp. A mysterious man named Matt (Eric Mabius) is also taken in by the group.

While Alice is still trying to recollect her past, she discovers that the life of everyone in the team is in danger from zombies in the facility, who have been infected with the T-virus. The team, which includes Rain Ocampo (Michelle Rodriguez), must come together to shut down the facility to prevent the zombies and the virus from escaping the facility, but their path is blocked by a supercomputer known as the Red Queen (Michaela Dicker).

Almost immediately following the events of Resident Evil, Alice finds herself in a zombie-infested Raccoon City. She bands with a special police officer Jill Valentine (Sienna Guillory) and mercenary Carlos Oliveira (Oded Fehr) to locate a scientist named Dr. Charles Ashford (Jared Harris), who they believe can help them escape Raccoon City. But the trio has very limited time as Umbrella plans to nuke Raccoon City to kill every infected or non-infected resident.

For fans of the series, Resident Evil: Apocalypse, the second film in the original series, is important for its characters. Dr. Alexander Isaacs (Iain Glen), one of the most significant antagonists of the franchise, is introduced for the first time in this film. Like Alice and the Red Queen, Dr. Isaacs is an original character created for the movies.

Also, the film marks the second live-action appearance of Jill Valentine in chronological order. But since it has the second by release date in the Resident Evil timeline, it was the first time fans actually got to see Valentine, one of the most important characters from the games, on the big screen. The film also marks the first appearance, both by release date and chronologically, of Carlos, who is another key character from the games.

Continuing the Resident Evil movie chronological order is the third film of the original series. Here, Alice tries to make it to Alaska with the help of a group of survivors, including Carlos and LJ (Mike Epps), from Raccoon City. Together, they try to cross the Nevada desert but Umbrella Corp has its own nefarious designs for Alice.

The film is notable for its a new dimension to Alice’s character build-up, introducing telekinesis as one of her powers as a result of the experiments conducted on her by Umbrella Corp. It is also revealed that there are clones of Alice.

Set one year after the events of the previous instalment in the Resident Evil franchise, the film follows Alice on her mission to destroy Umbrella Corp and its head Albert Wesker (Shawn Roberts). In her attempt, Alice loses her powers. She is then helped on her mission and a quest for a safe haven known as Arcadia in Los Angeles, by her allies in a prison surrounded by the undead.

Resident Evil: Retribution begins immediately after the climax scene of the previous film. Alice, who is now trapped by the Umbrella Corp, tries to find an escape route as well as a mind-controlled Jill Valentine (Guillory). While the zombie hordes keep growing bigger and the Red Queen re-emerges as a prime threat to humanity, Alice finds assistance from Leon (Johann Urb) and Ada Wong (Li Bingbing). But as she gets closer to her escape, she discovers her past life, and that there are not only clones of her own but also those of whom she knew.

Some characters who appeared in previous films of the original series also appear in this film. They include Rain Ocampo (Rodriguez), Carlos Oliveira (Fehr), Luther West (Boris Kodjoe) and James Shade (Colin Salmon).

The last Resident Evil movie in order of chronology, it is also the last movie in the original series.

Assisted by Claire, Alice goes on a final mission back to Raccoon City to destroy Umbrella Corp’s control centre known as The Hive. Though bolstered by a new group of survivors, they have to face the collective might of Dr. Isaacs (Glen), Albert (Roberts) and the Red Queen (Ever Anderson).

Leon (voiced by Paul Mercier) and Claire (voiced by Alyson Court) are thrust into the middle of a zombie outbreak in Harvardville triggered by a man seeking vengeance. As they attempt to unearth a conspiracy behind the outbreak, they also come across a mutated monster bent on killing them.

The story begins seven years after Raccoon City turned completely into a zombie-infested land in the game Resident Evil 2 (1998). Accordingly, this places the film in 2005 and is the first time that the characters Leon and Claire share the screen after 1998. The film was released straight-to-DVD and is one of the only two offerings in the franchise that was received well by critics.

The four-episode animated miniseries follows Leon (voiced by Nick Apostolides) and Claire (voiced by Stephanie Panisello) investigating a zombie outbreak in a different country. During the mission, they discover threads that connect the incident back home in the US.

Though the story connects with an incident in 2000, the film is mostly set in 2006 and is therefore a direct follow-up to Resident Evil: Degeneration. The events also act as a prequel to the game Resident Evil 5 (2009).

The CG animated film has the distinction of being the highest-rated of all the Resident Evil movies and TV shows in the franchise.

Leon (voiced by Matthew Mercer) returns in this film, which is set in 2011. The action follows him investigating the presence of bio-organic weapons in a war-torn former Soviet state. During his investigation, Leon comes across Ada Wong (voiced by Courtenay Taylor) — a special agent who is present in the country for a secret purpose.

Three years after the events of Resident Evil: Damnation, a broken Leon (voiced by Mercer) is brought back into action by Chris (Kevin Dorman), now an agent of Bioterrorism Security Assessment Alliance (BSAA), trying to prevent a dangerous criminal from unleashing an advanced virus in New York City. They are helped in their mission by Chris’ associate Rebecca Chambers (Erin Cahill).

Released on Netflix, this Resident Evil is a live-action series and is not connected to any of the films or shows that came before it. In fact, it takes an entirely different tangent in character building and is only loosely based on the core storyline of the games.

Alternating between two timelines — 2022 and 2036, the story follows Jade Wesker (Ella Balinska) trying to survive in a world in 2036 where violent zombies are everywhere. She is also trying to grapple with her traumatic past in New Raccoon City in South Africa where her father, Albert (Lance Reddick), was in charge of the Umbrella Corp, and where she apparently lost her sister Billie Wesker (Adeline Rudolph).